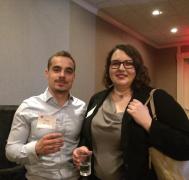 Department members can chalk up AGU's Centennial year as a success, taking home awards, giving invited talks, and presenting a plethora of earth and planetary research.

Every year, EAPS joins thousands of scientists at AGU’s Fall Meeting to present cutting-edge earth and planetary research, collaborate on work and congratulate colleagues who have made significant contributions to their respective fields and/or the community.

Like previous years, this past gathering proved to be fruitful for department members, as the quality of their work was recognized by the community. EAPS took home two awards: Timothy L. Grove, the Robert R. Shrock Professor of Earth and Planetary Sciences, was awarded the 2018 Harry H. Hess Medal for “outstanding achievements in research on the constitution and evolution of the Earth and other planets.” The citation notes Grove's expertise in igneous petrogenesis and petrogenesis on the Moon and asteroids. Grove has produced "perhaps the single most important body of experimental work in defining the nature of primary magmas of mid-ocean ridge magmatism." Some of his other research now "serves as a foundation of our modern understanding of the role of water in the evolution of subduction zone magmas." Grove has also greatly served the AGU community and science.

In addition to Grove's honor, MIT-WHOI Joint Program graduate student Meghan Jones was selected as one of seven Grand Prize winners for the 2018 AGU Data Visualization and Storytelling Competition, which focuses on presenting data in innovative and creative ways. For her proposal "visualizing the largest deep-ocean silicic eruption ever recorded," she created visualizations describing the discovery and exploration of the 2012 eruption of Havre Volcano in the Kermdec Arc. Jones' presentation included NASA MODIS imagery of a massive floating pumice raft produced by the eruption, 3D renderings of the high-resolution bathymetric data collected by the AUV Sentry, and seafloor imagery collected by the ROV Jason during an NSF sponsored research cruise.  As part of the award, she received a travel grant and presented her work on the NASA Hyperwall at the Fall Meeting.

In addition to awards, several of our researchers were invited to give talks. EAPS associate professor David McGee discussed “Millennial-scale and glacial-interglacial hydrological changes in the southwestern U.S. over the last 150,000 years.” Assistant professor Matej Pec spoke on the “Deformation mechanisms at the base of the seismogenic layer.” EAPS postdoctoral fellow Cailey Brown Condit considered in her talk how “Fluid infiltration promotes both ductile and brittle deformation within the deep crust: Examples from Southwestern Montana and the Central Alps.” Benjamin Weiss, professor of planetary sciences, discussed the "History of the solar nebula and planet formation from paleomagnetic measurements of meteorites."

08:00 - 10:00: Brian Zambri will convene a session “Understanding the Effects of Volcanic Eruptions: From Plume Evolution to Climate and Societal Impacts I” (GC11C)

08:30 - 08:45: Clara Maurel will present a talk “Modeling the formation of the cloudy zone in iron and iron-rich meteorites to better constrain their paleointensity estimates” (GP11A-03)

08:50 - 09:00: Harry Matchette-Downes will present a talk “Seismological observations of the isostatic support of southwestern Tibet” (T11A-04)

13:40 - 18:00: Brian Zambri will convene “Understanding the Effects of Volcanic Eruptions: From Plume Evolution to Climate and Societal Impacts Posters” (GC13E)

14:55 - 15:10: Tristan Abbott will give an oral presentation “How do Changes in Convective Dynamics Impact Tropical Precipitation Extremes in a Warming World?" (A13E-06)

08:00 - 10:00: Cailey Brown Condit will host a talk session "The Varied Roles of Aqueous Fluids near the Subduction Interface I" (T21B)

08:00 - 12:20: Saied Mighani will present a poster “Surface Roughness and Fluid Viscosity Controls on Propagation of a Hydraulic Fracture Across a Frictional Interface" (T31F-0378)

08:00 - 12:20: Emmanuel Avila Codillo will present a poster “Insights on Rock Hybridization Processes at the Slab-Mantle Interface from an Exhumed high-pressure Serpentinite-Eclogite Contact in the Voltri Massif (Ligurian Alps, Italy)” (T31G-0395)

08:00 - 12:20: Cailey Brown Condit will present a poster “The Varied Roles of Aqueous Fluids near the Subduction Interface II" (T31G)

11:35 - 11:50: Julie Jakoboski will present a poster “Estimates of Upwelling in the Vicinity of the Galápagos Archipelago from Glider Observations" (OS32A-06)

11:35 - 11:50: Cailey Brown Condit will give an invited talk “Fluid infiltration promotes both ductile and brittle deformation within the deep crust: Examples from Southwestern Montana and the Central Alps” (T32B-06)

13:40 - 18:00: Chen Gu will present a poster “Slip Behaviors on an Artificial Fault Surface with Engraved Topography in a Laboratory Stick-Slip Experiment: Insights on the Roles of Fault Roughness in Spatial and Temporal Seismic Distribution” (T33F-0482)

13:40 - 18:00: Eric Beaucé will present a poster “New Insight Into the Seismicity of the Western Alps from Automated Analysis of Dense Linear Array Data” (T33F-0476)

10:20 - 12:20: Margaret Duffy will give a talk “Changes in Laplacian of SST Important for Response of Precipitation to Climate Change over Tropical Oceans” (A42D-07)

13:40 - 18:00: Sukrit Ranjan and Daniel Koll will convene a session “Climate and Habitability of Rocky Planets in the Solar System and Beyond I Posters” (P43G)

14:10 - 14:25: Melanie Gerault will give a talk “Net rotation of the lithosphere in mantle convection models with self-consistent plate generation” (DI43A-03)

16:48 - 16:56: John Brooks Biersteker and Hilke Schlichting will host a talk “Atmospheric Mass Loss Due to Giant Impacts: The Importance of the Thermal Component for H/He Envelopes” (P44A-05)

16:15 - 16:30: Ruben Juanes will give a talk "Wettability Control on Multiphase Flow in Porous Media: A Benchmark Study on Current Pore-Scale Modeling Approaches" (H44F-02)

10:20 - 10:35: Benjamin Weiss will give an invited talk "History of the solar nebula and planet formation from paleomagnetic measurements of meteorites" (P52B-01)

10:20 - 10:35: Eva Golos will present a talk "Investigating the Role of Underplating and Mantle Plumes in the Midcontinent Rift Using Vp and Vp/Vs Tomography" (T52D-01)

10:35 - 10:50: Raphael Rousseau-Rizzi will present a talk "An Evaluation of Hurricane Superintensity in Axisymmetric Numerical Models" (A52F-02)

16:00 - 18:00: Sukrit Ranjan and Daniel Koll will convene a session “Climate and Habitability of Rocky Planets in the Solar System and Beyond II” (P54A)