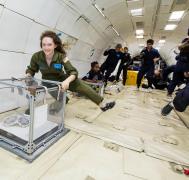 How will dancers perform in space? How will scientists do lab experiments without work tables? How will artists pursue crafting in microgravity? How can exercise, gastronomy, research, and other uniquely human endeavors be reimagined for the unique environment of space? These are the questions that drove the 14 projects aboard the MIT Media Lab Space Exploration Initiative’s second parabolic research flight.

Just past the 50th anniversary of the Apollo moon landing, humanity’s life in space isn’t so very far away. Virgin Galactic just opened its spaceport with the goal of launching space tourists into orbit within months, not years; Blue Origin’s New Shepard rocket is gearing up to carry its first human cargo to the edge of space, with New Glenn and a moon mission not far behind. We are nearing a future where trained, professional astronauts aren’t the only people who will regularly leave Earth. The new Space Age will reach beyond the technical and scientific achievements of getting people into space and keeping them alive there; the next frontier is bringing our creativity, our values, our personal pursuits and hobbies with us, and letting them evolve into a new culture unique to off-planet life.

But unlike the world of Star Trek, there’s no artificial gravity capability in sight. Any time spent in space will, for the foreseeable future, mean life without weight, and without the rules of gravity that govern every aspect of life on the ground. Through its annual parabolic flight charter with the ZERO-G Research Program, the Space Exploration Initiative (SEI) is actively anticipating and solving for the challenges of microgravity.

SEI’s first zero-gravity flight, in 2017, set a high bar for the caliber of the projects, but it was also a learning experience in doing research in 20-second bursts of microgravity. In preparation for an annual research flight, SEI founder and lead Ariel Ekblaw organized MIT's first graduate course for parabolic flights (Prototyping Our Sci-Fi Space Future: Zero Gravity Flight Class) with the goal of preparing researchers for the realities of parabolic flights, from the rigors of the preflight test readiness review inspections to project hardware considerations and mid-flight adjustments.

The class also served to take some of the intimidation factor out of the prospect of space research and focused on democratizing access to microgravity testbed environments.

“The addition of the course helped us build bridges across other departments at MIT and take the time to document and open-source our mentorship process for robust, creative, and rigorous experiments,” says Ekblaw.

SEI’s mission of democratizing access to space is broad: It extends to actively recruiting researchers, artists, and designers, whose work isn’t usually associated with space, as well as ensuring that the traditional engineering and hard sciences of space research are open to people of all genders, nationalities, and identities. This proactive openness was manifest in every aspect of this year’s microgravity flight.

While incubated in the Media Lab, the Space Exploration Initiative now supports research across MIT. Paula do Vale Pereira, a grad student in MIT's Department of Aeronautics and Astronautics (AeroAsto), was on board to test out automated actuators for CubeSats. Tim McGrath and Jeremy Strong, also from AeroAstro, built an erg machine specially designed for exercise in microgravity. Chris Carr and Maria Zuber, of the Department of Earth, Atmospheric and Planetary Sciences, flew to test out the latest iteration of their Electronic Life-detection Instrument (ELI) research.

Research specialist Maggie Coblentz is pursuing her fascination with food in space — including the world’s first molecular gastronomy experiment in microgravity. She also custom-made an astronaut’s helmet specially designed to accommodate a multi-course tasting menu, allowing her to experiment with different textures and techniques to make both food and eating more enjoyable on long space flights.

“The function of food is not simply to provide nourishment — it’s a key creature comfort in spaceflight and will play an even more significant role on long-duration space travel and future life in space habitats. I hope to uncover new food cultures and food preparation techniques by evoking the imagination and sense of play in space, Willy Wonka style,” says Coblentz.

With Sensory Synchrony, a project supported by NASA's Translational Research Institute for Space Health, Abhi Jain and fellow researchers in the Media Lab's Fluid Interfaces group investigated vestibular neuromodulation techniques for mitigating the effects of motion sickness caused by the sensory mismatch in microgravity. The team will iterate on the data from this flight to consider possibilities for novel experiences using augmented and virtual reality in microgravity environments.

The Space Enabled research group is testing how paraffin wax behaves as a liquid in microgravity, exploring it as an affordable, accessible alternative satellite fuel. Their microgravity experiment, run by Juliet Wanyiri, aimed to determine the speed threshold, and corresponding voltage, needed for the wax to form into a shape called an annulus, which is one of the preferred geometric shapes to store satellite fuel. “This will help us understand what design might be appropriate to use wax as a satellite fuel for an on-orbit mission in the future,” explains Wanyiri.

Xin Liu flew for the second time this year, with a new project that continues her explorations into the relationship between couture, movement, and self-expression when an artist is released from the constraints of gravity. This year’s project, Mollastica, is a mollusk-inspired costume designed to swell and float in microgravity. Liu also motion-captured a body performance to be rendered later for a “deep-sea-to-deep-space” video work.

The extraordinary range of fields, goals, projects, and people represented on this year’s microgravity flight speaks to the unique role the Space Exploration Initiative is already starting to play in the future of space.

For designer and researcher Alexis Hope, the flight offered the opportunity to discover how weightlessness affects the creative process — how it changes not only the art, but also the artist. Her project, Space/Craft, was an experiment in zero-g sculpture: exploring the artistic processes and possibilities enabled by microgravity by using a hot glue gun to "draw in 3D."

Like all of the researchers aboard the flight, Hope found the experience both challenging and inspiring. Her key takeaway, she says, is excitement for all the unexplored possibilities of art, crafting, and creativity in space.

“Humans always find a way to express themselves creatively, and I expect no different in a zero-gravity environment,” she says. “I’m excited for new materials that will behave in interesting ways in a zero-gravity environment, and curious about how those new materials might inspire future artists to create novel structures, forms, and physical expressions.”

Ekblaw herself spent the flight testing out the latest iteration of TESSERAE, her self-assembling space architecture prototype. The research has matured extensively over the last year and a half, including a recent suborbital test flight with Blue Origin and an upcoming International Space Station mission to take place in early 2020.

All of the research projects from this year’s flight — as well as some early results, the projects from the Blue Origin flight, and the early prototypes for the ISS mission — were on display at a recent SEI open house at the Media Lab.

For Ekblaw, the great challenge and the great opportunity in these recurring research flights is helping researchers to keep their projects and goals realistic in the moment, while keeping SEI’s gaze firmly fixed on the future.

“While parabolic flights are already a remarkable experience, this year was particularly meaningful for us. We had the immense privilege of finalizing our pre-flight testing over the exact days when Neil Armstrong, Buzz Aldrin, and Mike Collins were in microgravity on their way to the moon,” she says. “This 50th anniversary of Apollo 11 reminds us that the next 50 years of interplanetary civilization beckons. We are all now part of this — designing, building, and testing artifacts for our human, lived experience of space.”

Story Image: Chris Carr and Maria Zuber of the MIT Department of Earth, Atmospheric and Planetary Sciences have a little fun while monitoring their life-detection data experiment in microgravity. (Credit: Steve Boxall/ZERO-G)

Six suborbital research payloads from MIT fly to space and back

Prototypes for the new space age

With NASA’s help, AeroAstro students work in a spacelike environment