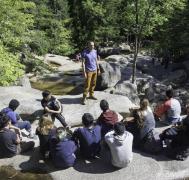 DEAPS: Understanding Extreme Weather and Climate, from Top to Bottom

During one of the last weekends of the summer before classes start, incoming MIT first year students had a chance to dive into some topics that have been dominating the headlines, as well as the science behind their study. This past summer, natural disasters like hurricane Dorian, which hit the Bahamas, had much of the US thinking about weather and climate, as well as other aspects of the environment. The course also allowed students to acquaint themselves with campus, its resources, and create new friendships as they embark on the latest chapter of their lives.

Over five days, new members of the MIT community dipped their toes in geoscience studies in the MIT’s Department of Earth, Atmospheric and Planetary Sciences (EAPS) and then took what they learned an applied it to Earth and planetary science investigations on Mt. Washington and at Wallace Observatory. EAPS faculty Lodovica Illari and John Marshall led the experience along with the help of several graduate and undergraduate students, and other department researchers.

The first day centered on exploring the principles behind the study of weather and how circulation patterns in the oceans and atmosphere in different parts of the globe interact to move storms or carry pollutants around the world. To do this, students climbed to the top of the Green Building, home to EAPS. Here, Illari and graduate student Tristan Abbott taught the students how to use weather instruments to measure parameters like wind speed and direction, atmospheric pressure, and temperature. They also learned about infrared radiation emitted from the sky. Students were then tasked with measuring the height of the building using a pressure difference at the top verses on the ground, and another way that most would agree was more fun: dropping fruit from the top and timing their descent to an explosive conclusion. Illari led a discussion using the iGlobe, a large sphere with virtual projections, that allowed students to observe general circulation patterns like the jet streams and differences between the tropics and the extratropics, as well as clouds, winds and aerosols. They witnessed how pollutants or contaminants such as radioactive waste from the Fukushima disaster could propagate.

On the second and third days, students changed their frame of reference, learning about some of the less visible forces present on Earth and in our universe. EAPS Assistant Professor Brent Minchew took students on a “guided tour” of the cryosphere, discussing Antarctic glaciers and climate change. Examples like the “Doomsday glacier” illustrated how particular physics of certain glaciers and melting ice could lead to rapid sea level rise. Marshall, Illari, and lab assistant Bill McKenna demonstrated with a rotating fluids tank how system size matters when it comes to understanding the forces creating cyclones and tornadoes. This was bolstered by Martin Velez Pardo and Rohini Shivamoggi’s real life examples from the 2019 hurricane season. The day was topped off with a brilliant trip to the MIT Wallace Observatory, where EAPS Senior Lecturer Amanda Bosh pointed out some of galaxy’s splendors hiding in the night sky. Additional lessons from EAPS researcher Jeff Scott on ice ages and climate modeling, and rotating tank experiments to understand weather system formation prepared students for their trip to Mount Washington in New Hampshire, where they observed Jupiter through a telescope and made “light paintings” with long-exposure photographs.

Here, students took in the beautiful scenery while appreciating how it came to be. A drive from North Conway up to Pinkham Notch, at the base of Mt. Washington about 2000 feet above sea level, gave first years a chance to cut their teeth in meteorology, using what they learned from the Green Building tests to estimate the height of Mt. Washington and examine clouds flowing over the mountain. As the group hiked up the mountain, they learned about how climate, elevation, and latitudinal changes in North American influence biomes, in particular plants and how adaptations allow broadleaf trees and conifers to dominate at different elevations on Mt. Washington. Breaking out of the clouds, students completed the ascent and toured the summit weather observatory, where they learned about the extreme weather that is so distinctive of Mt. Washington—it holds the record for the highest surface wind speed ever measured in the Northern Hemisphere—and why it’s unique, including the peak’s prominence, latitude, and the orientation of the White Mountains with respect to the westerly winds. They saw the dwellings of the weather observers and learned how they captured this data.

A theme emerged during DEAPS: geology, biology and weather don’t exist in a vacuum; they influence and feedback on each other over both short and long timescales and distances. A steep rocky hike to an alpine garden revealed new plant adaptations to short growing seasons and harsh conditions, as well as geologic features capturing the formation of the White Mountains, 450 million years ago, and how the last ice age reshaped the landscape into what we see today. Diana’s Baths, a series of cascading waterfalls along Lucy Brook near North Conway, provided a scenic example of how rivers shape landscapes. A fan favorite are potholes—small, deep depressions ground into rock when eddies in the river focus abrasion in a small area.

With this newly gained knowledge and fresh friendships, first year students returned to MIT ready to tackle the academic year and any New England storms that might come their way.