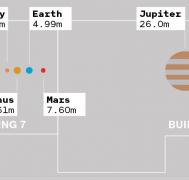 Corralling the cosmos in the Infinite Corridor

How MIT’s Infinite Solar System display brings the universe down to Earth.

Read this at MIT Tech Review

Sometimes numbers get in the way of our comprehension. While that might seem like an odd statement coming from an MIT professor, I’m convinced it’s true, especially when it comes to the vast dimensions of space or the nano-dimensions of atoms. Our human brains seem best suited for grasping the kinds of distances that a hunter-gatherer might travel in a day or a few weeks. A starry night sky looks like pinpoints of light etched on a crystal sphere, and it is quite impossible to discern by eye how high the moon or how far the sun. But don’t feel bad. It took centuries of travails by the ancient Greeks and the likes of Copernicus, Galileo, Kepler, Newton, Einstein, Leavitt, Hubble, Hawking, Guth, and Rubin to describe the workings and origin of our universe. Thankfully for our graduate students and their careers, that task is far from finished.

When our human scale fails us, we hide behind the numbers. We wield scientific notation like a sword that keeps us from having to admit our inadequacy. Who among us can conceptualize the 6.02 × 1023 molecules of water in a sip of coffee? But astronomers have it even worse. They have to deal with unfathomable units involving both space and time, in the form of light-years—often with a full cup of coffee in hand. It seems comforting to say the nearest star is only 4.2 light-years away, as this disguises the fact that we are really talking about 3.9 × 1013 kilometers. But the entire observable universe is thought to span 93 billion light-years, or an incomprehensible Avogadro-like 8.8 × 1023 km.

As a professional astronomer I conceded to being human long ago, deciding to stick to our own cozy solar system, where distances are measured in light-minutes (8.3 minutes for light to travel from the sun to Earth) and light-hours (about five from the sun to the dwarf planet Pluto).

In my first year of teaching introductory planetary science (12.400, The Solar System), I wanted to give my students a true sense of the scale of the cosmos. Thus for decades, I have posed a simple question as Problem Set #1:

If the span of our solar system from the Sun to Pluto is scaled to the length of the Infinite Corridor, how large is the Sun and how far away is the Earth?

Give that question a moment’s thought before proceeding below. How good is your intuition?

Gratification has come each semester in seeing astonishment on students’ faces that the math reveals the sun to be the size of a golf ball, with the Earth a tiny BB a mere five meters (16 feet) away. (Humbling given that the overall length of the Infinite Corridor is 200 meters.) When we realize that the heroic achievements of Project Apollo got us only one half-inch (!) away from Earth in reaching the moon, the daunting challenge of sending humans to Mars (at its closest three meters away) becomes clear.

Not so subtly, I’ve “suggested” to each year’s class what a heavenly overnight hack it would be to actually set up such a scale model. Getting no takers, I finally resorted to surreptitiously marking it out myself with a long tape measure and blue chalk marks along the floor molding of Buildings 7, 3, 10, 4, and 8. Standing there and taking in our whole solar system in the quiet (4 a.m.) expanse of the Infinite Corridor was as grand a “Eureka!” moment as any in my scientific career: I realized I had bumbled into an incredible pedagogic tool for kids of all ages.

Despite my enthusiasm, it proved easier said than done to explain how an artful depiction of the planets could be combined with the architecture of the MIT main buildings to become a teaching instrument for science. But eventually, with support from Mike Sipser and Heather Williams, the dean and assistant dean of the School of Science, and the expertise of senior campus planner Todd Robinson and Lincoln Lab’s planet modeling guru Arthur Lue, the installation came to life. Fittingly, we opened the exhibit on November 9, 2018, to coincide with last fall’s MIThenge, the biannual phenomenon in which the universe aligns itself with the Institute as the setting sun shines down the length of the corridor. That cosmic effect is most pronounced on the third floor, so we installed the exhibit there.

There’s nothing novel about a scale model of the solar system. You can find one at the Boston Museum of Science and on the National Mall. Those models, however, are on a city scale and require a dedicated effort to traverse. The scale within the Infinite Corridor works particularly well because it is a familiar space visibly bounded on both ends by windows. No matter where you are in your exploration, a glance each way delivers context for how far you’ve come and what is left to go. What’s more, the full journey requires only a few minutes of one’s attention, a limited resource for all of us in our overconnected lives.

My hope is that every member of the MIT community will at least once take a contemplative journey down the Infinite’s third floor, starting from Lobby 7 and through Building 8. The Infinite Solar System’s scale reduction, using a divisor of 30 billion (3 × 1010), reduces the speed of light to a snail’s pace of one centimeter per second. A normal walking pace from the sun to Pluto (in five minutes, not five hours) offers observers the chance of a lifetime to outpace light and experience the thrill of warp speed.

Gazing toward the sun from Pluto and considering the size of Earth, and ourselves as nano-specks thereon, is humbling. As one example, the navigation precision required for NASA’s New Horizons spacecraft to arrive on target for its 2015 flyby of Pluto was (on this scale) finer than a human hair. Our farthest-­flung creation, Voyager 1, has left our solar system and at scale is currently passing the 300-smoot mark on its way to the deep space of Back Bay. If we extend our gaze still further, the nearest star, Proxima Centauri, is “only” at the distance to Chicago on this scale—a feasible distance to traverse when one considers the continental-length migrations achieved by our early human ancestors. Those prehistoric migrations were odysseys of curiosity and survival, just as our journey to the stars might someday be. Quite a lot to consider on one’s walk to lunch down the Infinite Corridor.

Richard P. Binzel is a professor of both planetary science and aerospace engineering and a MacVicar Faculty Fellow. He invented the Torino Scale, which categorizes the impact hazard of near-Earth objects, and served 20 years as a science team member of NASA's New Horizons mission to Pluto. Asteroid number 2873 bears his name.

Story Image: The scale model of the solar system designed by Professor Richard Binzel begins in Building 7 with a plaque describing the sun and extends along the third floor of the Infinite Corridor. (Credit: Julia David) 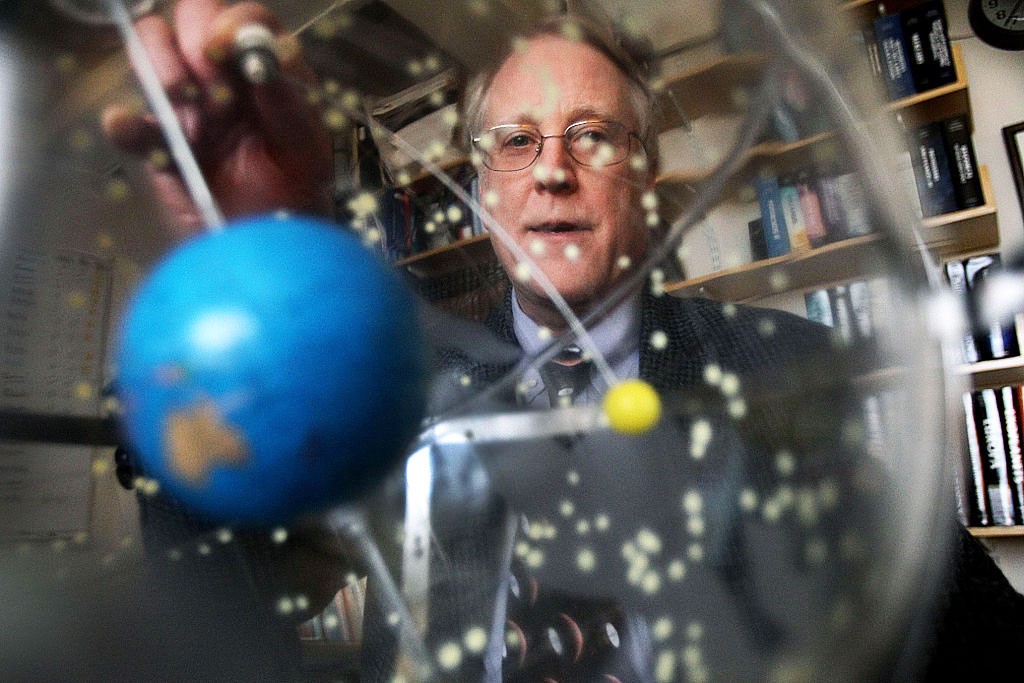