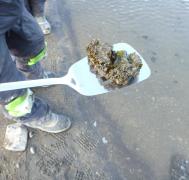 Continuing a Legacy of Antarctic Exploration

EAPS Summons Lab examines lipids from Antarctic microbial communities to understand the evolution of complex life on Earth and life that existed during "snowball Earth."

When Robert F. Scott’s Discovery expedition began their exploration of the Antarctic continent in 1901, they set out to achieve two goals: to geographically and scientifically characterize the regions touched by the Ross Sea. As the group of naval officers and scientists set foot upon the Ross Ice Shelf, they mapped their travels and completed surveys collecting biological specimens for further study.

Two polar explorers and physicians on the expedition, Drs. Reginald Koettlitz and Edward Wilson, noticed microbial mats composed of cyanobacteria growing along the edges of shallow freshwater ponds as they traversed the McMurdo Ice Shelf in and around Ross Island. In the name of natural science, they sampled them, and the preserved mats spent nearly the next century in the collections of London’s Natural History Museum.

In 2017, Anne Jungblut, PhD, a life sciences researcher at the museum, examined Koettlitz’s and Wilson’s mats to study whether Antarctica’s cyanobacterial diversity had changed since the Discovery expedition by comparing them to modern mats from the same region. Her results showed that, for the most part, the microbial community remained stable with slow genetic turnover — a testament to the cyanobacteria’s resilience on the icy continent.

Roger Summons, the Schlumberger Professor of Geobiology in the Department of Earth, Atmospheric and Planetary Sciences (EAPS), traveled to Antarctica in 2018 with colleagues Ian Hawes, PhD, of the University of Waikato and Marc Schallenberg, PhD of the University of Otago in New Zealand to take a first-hand look at types of environments in which these microbial mats thrive. The trio ventured to Bratina Island, which is surrounded by the Ross Ice Shelf. There, the meltwater ponds form in the midst of “dirty ice,” debris-covered slopes of ice and volcanic rock.

“The ponds have liquid water, though there a few ponds that have thin layers of ice over them — and its full-on sunlight,” Summons says. “What a phenomenal challenge it would have been for the early explorers to carry equipment across this place because of its precipices, holes, miserable weather, and wind.”

The unique topography of the glacial environment results from a vertical conveyer-belt mechanism that moves sediment from the sea bed up to the surface of McMurdo Ice Shelf. While wind causes the ice’s surface to ablate — to evaporate or melt — seawater freezes beneath the ice shelf, sometimes trapping sea sediments and organisms in the ice. As more ice ablates at the surface over time, material from the sea beneath is transported upwards over long timescales, accumulating at the surface. In Antarctica, Summons saw ancient sponges and bryozoans — aquatic invertebrates that once grew in the water beneath the ice — scattered among the sediments. And, like Koettlitz and Wilson, Summons and his colleagues sampled the microbial mats thriving in the ephemeral meltwater ponds.

Thomas Evans, a postdoctoral researcher in the EAPS Summons lab, has been studying these microbial communities because of their potential as models for the evolution of complex life on Earth during the Cryogenian Period, an enigmatic geologic time-slice that took place 720 to 635 million years ago. “These oases of life in high latitude ecosystems are of interest because they might serve as analogs to those that existed when the Earth experienced two long-lasting glaciations of global extent,” Evans says.

These glaciations play a central role in the version of the Snowball Earth hypothesis described by Paul Hoffman, professor emeritus at Harvard University. The hypothesis delineates scenarios in which the Earth becomes entirely or almost entirely covered by ice, pulling the brakes on biological productivity. But those icy events didn’t quite halt the existence or radiation of life.

“I’ve always been interested in the evolution of animals after the Cryogenian,” Summons says. “Why do we see Ediacara fauna so quickly after such a dramatic epoch in Earth’s History?” The Ediacaran marks the rise of multicellularity with tissue specialization, though little fossil evidence exists concerning the precise nature of the Ediacaran biota. To study what conditions during the Cryogenian may have contributed to the resiliency of life during glacial periods, Summons and Evans both examine lipids, molecules that play roles in energy storage, biological signaling, and in fortifying cell membranes.

Evans specifically focused on intact polar lipids — known as IPLs — biomarkers diagnostic for living cells. “IPLs represent an important barrier by maintaining the flux and gradients of ions and nutrients between the inner cell and the environment,” Evans says.

“The analysis of IPLs provides the perfect tool to investigate how microbes can thrive under extreme climatic conditions, and how they adjust to the radical summer-winter environmental changes,” Evans says. Even further, the IPLs can help pinpoint important chemotaxonomic information about the cyanobacterial communities in the mats — which helps researchers like Jungblut determine the effects of climate change in the region over time.

To study the IPLs, Evans analyzed the compounds on an instrument that employs high-pressure liquid chromatography coupled with a mass spectrometer. The instrument, which takes the space of a large closet, separates molecules based on their polarity and molecular formulae. From there, Evans deduces the lipid structures and abundances, and connects them with the environmental parameters of the particular microbial mats to determine what contributes most to the lipid variability within the different mat communities.

“Based on our data, environmental conditions, such the availability of nutrients and variations in temperature, seem to be the main driver of lipid membrane set-up,” Evans says. “These microbes have a very special lipid signature that allows them to adapt to the extreme climatic conditions in Antaractica’s harsh environment.” In a continuation of this work, Summons and Evans are investigating other compound classes such as the sterols that modulate the membrane behavior of the microscopic eukaryotes that occupy particular niches within an otherwise bacterially-dominated landscape.

“In the process of answering the most obvious questions others always crop up,” Summons says. “No matter what we learn, there are always curiosities that beg to be investigated.”

How to Survive in One of Earth’s Most Extreme Environments

The Power of Persistence and the Scientific Method