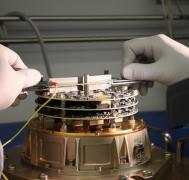 Computing and the Search for New Planets

When MIT launched the MIT Stephen A. Schwarzman College of Computing this fall, one of the goals was to drive further innovation in computing across all of MIT’s schools. Researchers are already expanding beyond traditional applications of computer science and using these techniques to advance a range of scientific fields, from cancer medicine to anthropology to design — and to the discovery of new planets.

Computation has already proven useful for the Transiting Exoplanet Survey Satellite (TESS), a NASA-funded mission led by MIT. Launched from Cape Canaveral in April 2018, TESS is a satellite that takes images of the sky as it orbits the Earth. These images can help researchers find planets orbiting stars beyond our sun, called exoplanets. This work, which is now halfway complete, will reveal more about the other planets within what NASA calls our “solar neighborhood.”

“TESS just completed the first of its two-year prime mission, surveying the southern night sky,” says Sara Seager, an astrophysicist and planetary scientist at MIT and deputy director of science for TESS. “TESS found over 1,000 planet candidates and about 20 confirmed planets, some in multiple-planet systems.”

While TESS has enabled some impressive discoveries so far, finding these exoplanets is no simple task. TESS is collecting images of more than 200,000 distant stars, saving an image of these planets every two minutes, as well as saving an image of a large swath of sky every 30 minutes. Seager says every two weeks, which is how long it takes the satellite to orbit the Earth, TESS sends about 350 gigabytes of data (once uncompressed) to Earth. While Seager says this is not as much data as people might expect (a 2019 Macbook Pro has up to 512 gigabytes of storage), analyzing the data involves taking many complex factors into consideration.

Seager, who says she has long been interested in how computation can be used as a tool for science, began discussing the project with Victor Pankratius, a former principal research scientist in MIT’s Kavli Institute for Astrophysics and Space Research, who is now the director and head of global software engineering at Bosch Sensortec. A trained computer scientist, Pankratius says that after arriving at MIT in 2013, he started thinking about scientific fields that produce big data, but that have not yet fully benefited from computing techniques. After speaking with astronomers like Seager, he learned more about the data their instruments collect and became interested in applying computer-aided discovery techniques to the search for exoplanets.

“The universe is a big place,” Pankratius says. “So I think leveraging what we have on the computer science side is a great thing.”

The basic idea underlying TESS’ mission is that like our own solar system, in which the Earth and other planets revolve around a central star (the sun), there are other planets beyond our solar system revolving around different stars. The images TESS collects produce light curves — data that show how the brightness of the star changes over time. Researchers are analyzing these light curves to find drops in brightness, which could indicate that a planet is passing in front of the star and temporarily blocking some of its light.

“Every time a planet orbits, you would see this brightness go down,” Pankratius says. “It's almost like a heartbeat.”

The trouble is that not every dip in brightness is necessarily caused by a passing planet. Seager says machine learning currently comes into play during the “triage” phase of their TESS data analysis, helping them distinguish between potential planets and other things that could cause dips in brightness, like variable stars, which naturally vary in their brightness, or instrument noise.

Analysis on planets that pass through triage is still done by scientists who have learned how to “read” light curves. But the team is now using thousands of light curves that have been classified by eye to teach neural networks how to identify exoplanet transits. Computation is helping them narrow down which light curves they should examine in more detail. Liang Yu PhD ’19, a recent physics graduate, built upon an existing code to write the machine learning tool that the team is now using.

While helpful for homing in on the most relevant data, Seager says machine learning cannot yet be used to simply find exoplanets. “We still have a lot of work to do,” she says.

Pankratius agrees. “What we want to do is basically create computer-aided discovery systems that do this for all [stars] all the time,” he says. “You want to just press a button and say, show me everything. But right now it's still people with some automation vetting all of these light curves.”

Seager and Pankratius also co-taught a course that focused on various aspects of computation and artificial intelligence (AI) development in planetary science. Seager says inspiration for the course arose from a growing interest from students to learn about AI and its applications to cutting-edge data science.

In 2018, the course allowed students to use actual data collected by TESS to explore machine learning applications for this data. Modeled after another course Seager and Pankratius taught, students in the course were able to choose a scientific problem and learn the computation skills to solve that problem. In this case, students learned about AI techniques and applications to TESS. Seager says students had a great response to the unique class.

“As a student, you could actually make a discovery,” Pankratius says. “You can build a machine learning algorithm, run it on this data, and who knows, maybe you will find something new.”

Much of the data TESS collects is also readily available as part of a larger citizen science project. Pankratius says anyone with the right tools could start making discoveries of their own. Thanks to cloud connectivity, this is even possible on a cell phone.

“If you get bored on your bus ride home, why not search for planets?” he says.

Pankratius says this type of collaborative work allows experts in each domain to share their knowledge and learn from each other, rather than each trying to get caught up in the other’s field.

“Over time, science has become more specialized, so we need ways to integrate the specialists better,” Pankratius says. The college of computing could help forge more such collaborations, he adds. Pankratius also says it could attract researchers who work at the intersection of these disciplines, who can bridge gaps in understanding between experts.

Pankratius says that is in part because there is more evidence that leveraging computer science techniques is an effective way to address various types of problems and growing data sets.

“We now have demonstrations in different areas that the computer-aided discovery approach doesn’t just work,” Pankratius says. “It actually leads to new discoveries.”

Story Image: Worlds orbiting stars other than our sun are “exoplanets,” and they come in many sizes, from gas giants larger than Jupiter to small, rocky planets. This illustration of a "super-Earth" represents the type of planet that the TESS mission aims to find outside our solar system. (Image: M. Kornmesser/ESO)

How Do Scientists Discover Planets Light Years Away? There's An Art To It, MIT Researchers Say

Life Probably Exists Beyond Earth. So How Do We Find It?

TESS Discovers Its Third New Planet, with Longest Orbit Yet