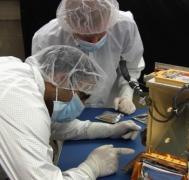 Catching Rays with REXIS on the Way to Asteroid Bennu

The REXIS instrument will help the OSIRIS-REx spacecraft determine which areas on Bennu to sample.

On September 14, the protective cover on NASA's OSIRIS-REx spacecraft's Regolith X-Ray Imaging Spectrometer (REXIS) was opened, allowing Lincoln Laboratory–built charge-coupled devices (CCDs) to begin imaging X-rays from deep space. After, REXIS calibrated its components by gazing into the cosmic X-ray background and the X-ray–rich Crab Nebula. The imaging enabled by the four CCDs on REXIS will aid the satellite's main mission to sample the surface of the asteroid Bennu. Scientists anticipate that the samples will help reveal answers to some of humanity's most sought-after questions, such as whether the building blocks of life were present at the solar system's creation.

Kevin Ryu of Lincoln Laboratory's Advanced Imager Technology Group that developed the CCDs calls these devices the "heart" of REXIS, enabling the X-ray spectroscopy that will help determine which elements exist on Bennu. "It is really rewarding to see something that you touched making its way onto the spacecraft, into space, and all the way out to an asteroid hundreds of millions of miles away from Earth," he said.

The REXIS instrument — largely designed, developed, and built by students at MIT and Harvard — is tailored to capture X-rays because they are indicative of their source's composition. When X-rays from the sun and solar wind come in contact with matter, that matter's atoms will emit their own X-rays. Researchers can read the energy signature of these X-rays to determine what elements they came from. Part of OSIRIS-REx's mission is to collect samples that might contain carbon — a building block of life. REXIS will help determine which areas on Bennu are most likely to contain carbon.

The CCDs on REXIS can perform spectroscopy on a single X-ray photon while providing information on the location from which a specific photon originated. "This capability is made possible by combining the low-noise CCDs that the Laboratory has developed for decades with the on-chip optical-blocking filter," Ryu said. "The filter blocks signals from the visible band [of light] so that a single X-ray photon can be read out from the CCD."

This blocking filter is important because light from the visible spectrum is much stronger than that from X-rays. When an X-ray comes in contact with a CCD, it creates about a thousand electrons, which is what the REXIS instrument reads and records as data. By comparison, visible light creates electrons in the millions, which would effectively drown out the signal from the X-rays.

Renee Lambert from the Advanced Imager Technology Group coordinated CCD fabrication in the Microelectronics Laboratory. The CCDs were then cut using a precision dicing method and attached to carrier packages in the Laboratory's packaging lab.

"These processes are commonly employed in the semiconductor industry, but due to the delicate nature of the CCDs, we have found that it's necessary to modify those processes to avoid damaging the devices," explained Keith Warner, a member of the Advanced Imager Technology Group involved in packaging and assembling the CCDs. "In the case of the REXIS CCDs, we used a legacy carrier design similar to that which was used for the Chandra X-ray telescope, which also used Laboratory CCDs."

Staff from the Laboratory's Fabrication Engineering Group also contributed to the REXIS instrument by spearheading multiple electronic fabrication activities. Victor Ingram designed the instrument's printed circuit boards and worked together with the MIT campus team to assemble it, and former Laboratory employee Peter Fournier advised the team on the design and fabrication requirements for a space environment. Fabrication Engineering staff also assembled the boards, a flex strip, and cables; assisted in shake testing REXIS components; and supported the campus team in design and performance improvements.

"Working with the campus team was great," said James Kelly, head of the Fabrication Engineering Group. "This is at least partially due to their program manager, Dr. Rebecca Masterson, whose excitement and enthusiasm is infectious."

Laura Bayley, a staff member from the Space Systems Analysis and Test Group, worked on REXIS as a graduate student at MIT: "The mission definitely benefits from the world-class Laboratory detectors, and it also greatly benefited from Laboratory support when we had to re-qualify the REXIS instrument after a vibration test failure." Bayley was the REXIS lead integration and test engineer.

The OSIRIS-REx spacecraft was launched on September 8, 2016, as the third spacecraft in NASA's New Frontiers Program, which aims to explore and better understand the solar system. It reached Bennu on December 3, 2018, and will return to Earth in 2023.

"Bennu was discovered in 1999 as part of the Lincoln Near-Earth Asteroid Research (LINEAR) survey, which is a Laboratory program [supported by the Air Force Office of Scientific Research and NASA]. Our CCDs found the asteroid, and now our CCDs will be used to help examine it, which is an interesting bit of historical irony, in my opinion," Warner said. "Personally, as an amateur astronomer, I am thrilled to have had a tiny role in this program."

The OSIRIS-REx mission is updated regularly via the program’s Twitter feed.

Story Image: Shown above is a 150-millimeter wafer with four charge-coupled imaging device-41s, which are utilized in REXIS. The devices are shown in the center of the photo as four large squares in a row. (Photo: courtesy of MIT Lincoln Laboratory)