Understanding the Earth under Hawaii

Study finds lateral variations in composition at a key depth below the island hotspot, provides scientists a new understanding of mantle mixing.

In the 1960s, some 50 years after German researcher Alfred Wegener proposed his continental drift hypothesis, the theory of plate tectonics gave scientists a unifying framework for describing the large-scale motion of the surface plates that make up the Earth’s lithosphere — a framework that subsequently revolutionized the geosciences.

How those plates move around the Earth’s surface is controlled by motion within the mantle — the driving force of which is convection due to thermal anomalies, with compositional heterogeneity also expected. However, the technical challenge of visualizing structures inside an optically impenetrable, 6,371-kilometer-radius rock sphere has made understanding the compositional and thermal state of the mantle, as well as its dynamic evolution, a long-standing challenge in Earth science.

Now, in a paper published today in Nature Communications, researchers from MIT, Imperial College, Rice University, and the Institute of Earth Sciences in France report direct evidence for lateral variations in mantle composition below Hawaii. The results provide scientists with important new insights into how the Earth has evolved over its 4.5 billion year history, why it is as it is now, and what this means for rocky planets elsewhere.

Scientists treat the mantle as two layers — the lower mantle and the upper mantle — separated by a boundary layer termed the mantle transition zone (MTZ). Physically, the MTZ is bounded by two seismic-velocity discontinuities near 410 km and 660 km depth (referred to as 410 and 660). These discontinuities, which are due to phase transitions in silicate minerals, play an important role in modulating mantle flow. Lateral variations in depth to these discontinuities have been widely used to infer thermal anomalies in the mantle, as mineral physics predicts a shallower 410 and a deeper 660 in cold regions and a deeper 410 and a shallower 660 in hot regions.

Previous petrological and numerical studies also predict compositional segregation of basaltic and harzburgitic material (and thus compositional heterogeneity) near the base of the MTZ in the relatively warm low-viscosity environments near mantle upwellings. But observational evidence for such a process has been scarce.

The new study, however, demonstrates clear evidence for lateral variation in composition near the base of the MTZ below Hawaii. This evidence could have important implications for our general understanding of mantle dynamics.

As lead author Chunquan Yu PhD '16, a former grad student in the Hilst Group at MIT who is now a postdoc at Caltech, explains, “At middle ocean ridges, plate separation results in ascending and partial melting of the mantle material. Such a process causes differentiation of the oceanic lithosphere with basaltic material in the crust and harzburgitic residue in the mantle. As the differentiated oceanic lithosphere cools, it descends back into the mantle along the subduction zone. Basalt and harzburgite are difficult to separate in cold environments. However, they can segregate in relative warm low-viscosity environments, such as near mantle upwellings, potentially providing a major source of compositional heterogeneity in the Earth’s mantle.”

To explore this idea, Yu and his colleagues used a seismic technique involving the analysis of underside shear wave reflections off mantle discontinuities — known as SS precursors — to study MTZ structures beneath the Pacific Ocean around Hawaii.

“When an earthquake occurs, it radiates both compressional (P) and shear wave (S) energy. Both P and S waves can reflect from interfaces in the Earth’s interior,” Yu explains. “If an S wave leaves a source downward and reflects at the free surface before arriving at the receiver, it is termed SS. SS precursors are underside S-wave reflections off mantle discontinuities. Because they travel along shorter ray paths, they are precursory to SS.”

Using a novel seismic array technique, the team were able to improve the signal-to-noise ratio of the SS precursors and remove interfering phases. As a result, much more data that otherwise would have been discarded became accessible for analysis.

The analysis finds strong lateral variations in radial contrasts in mass density and wavespeed across 660 while no such variations were observed along the 410. Complementing this, the team’s thermodynamic modeling, along a range of mantle temperatures for several representative mantle compositions, precludes a thermal origin for the inferred lateral variations in elastic contrasts across 660. Instead, the inferred 660 contrasts can be explained by lateral variation in mantle composition: from average (pyrolytic; about 60 percent olivine) mantle beneath Hawaii to a mixture with more melt-depleted harzburgite (about 80 percent olivine) southeast of the hotspot. Such compositional heterogeneity is consistent with numerical predictions that segregation of basaltic and harzburgitic material could occur near the base of the MTZ near hot deep mantle upwellings like the one that is often invoked to cause volcanic activity on Hawaii. 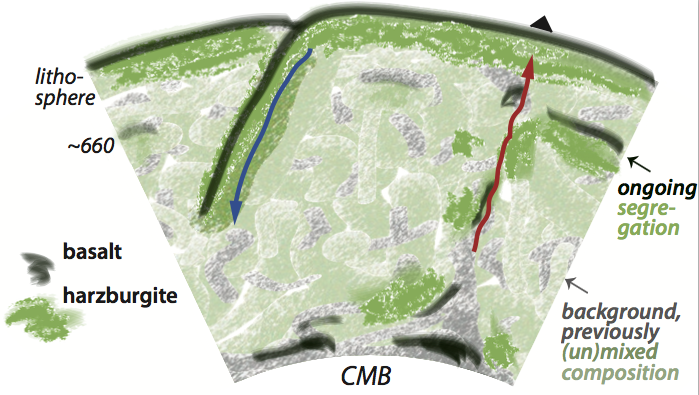 Cartoon of thermo-chemical mantle convection. Brighter colors represent compositional mixing and unmixing by currently active convection, while the faded colours symbolise older heterogeneity in the background mantle. When a cold oceanic plate (blue arrow) subducts deep into Earth’s mantle, its rheological strength prevents the separation of basaltic crust and harzburgitic melt residues. Once heated in the deep mantle, however, their differential density can lead to separation and, over time, the formation of a mechanically mixed mantle. Some basalt may segregate on top of the core-mantle-boundary (CMB) because at those pressures a basaltic composition is denser than harzburgite. In low-viscosity upwellings (red arrow), segregation can also occur near 660 km depth because harzburgitic components remain in a dense lower-mantle composition longer than basalt. Over time this can form laterally heterogeneous harzburgitic and basaltic accumulations around 660, replenished at upwellings and disrupted by downwellings - courtesy: Yu et al.

“It has been suggested that compositional segregation between basaltic and harzburgitic materials could form a gravitationally stable layer over the base of the MTZ. If so it can provide a filter for slab downwellings and lower-mantle upwellings, and thus strongly affect the mode of mantle convection and its chemical circulation,” says Yu.

This study presents a promising technique to get constraints on the thus far elusive distribution of compositional heterogeneity within Earth’s mantle. Compositional segregation near the base of the MTZ has been expected since the 1960s and evidence that this process does indeed occur has important implications for our understanding of the chemical evolution of the Earth.

Yu’s co-authors are Elizabeth Day, a former postdoc in the Hilst Group who is now a senior teaching fellow at Imperial College; Maarten V. de Hoop of Rice University; Michel Campillo of the Institute of Earth Sciences in France; Saskia Goes and Rachel Blythe of Imperial College; and Professor Robert van der Hilst, head of the MIT Department of Earth, Atmospheric and Planetary Sciences.

This work was funded by the Simons Foundation, the National Science Foundation, National Environmental Research Council, and a Royal Society Fellowship.

Looking Deep in the Earth - Video by Helen Hill, MIT From the EAPS video archive: An interview with co-author Lizzie Day made when she was a postdoc at MIT.