Read about the cruise at the Schmidt Ocean Institute and follow their progress on the cruise log.

The quantity of “fixed nitrogen” (usually ammonium and nitrate) in the ocean is critical for the strength of the biological carbon pump. Phytoplankton, which form the base of the marine food web, utilize these nitrogen nutrients for growth. In oxygen deficient zones (ODZs), where oxygen concentrations drop to extremely low levels, microbial processes lead to the conversion of fixed nitrogen into nitrogen gas, which is not available to most phytoplankton. However, these processes and interactions are not well understood. It is difficult to collect, move, and incubate seawater from ODZs without oxygen contamination. Professor Karen Casciotti, Stanford University, and Professor Andrew Babbin, Massachusetts Institute of Technology, and their team will attempt to find a solution. On a three week expedition aboard Falkor, the interdisciplinary team of oceanographers, biogeochemists, and engineers will test, modify, and apply a new generation of autonomous in situ incubation devices that take measurements and record data. They will assess the new device’s performance against state of the art deckboard incubations to determine the new technology’s accuracy, as well as measure the rates and processes of nitrogen transformation in the region. This research will take place in one of the largest natural marine oxygen deficient zones in the Eastern Tropical North Pacific Ocean. 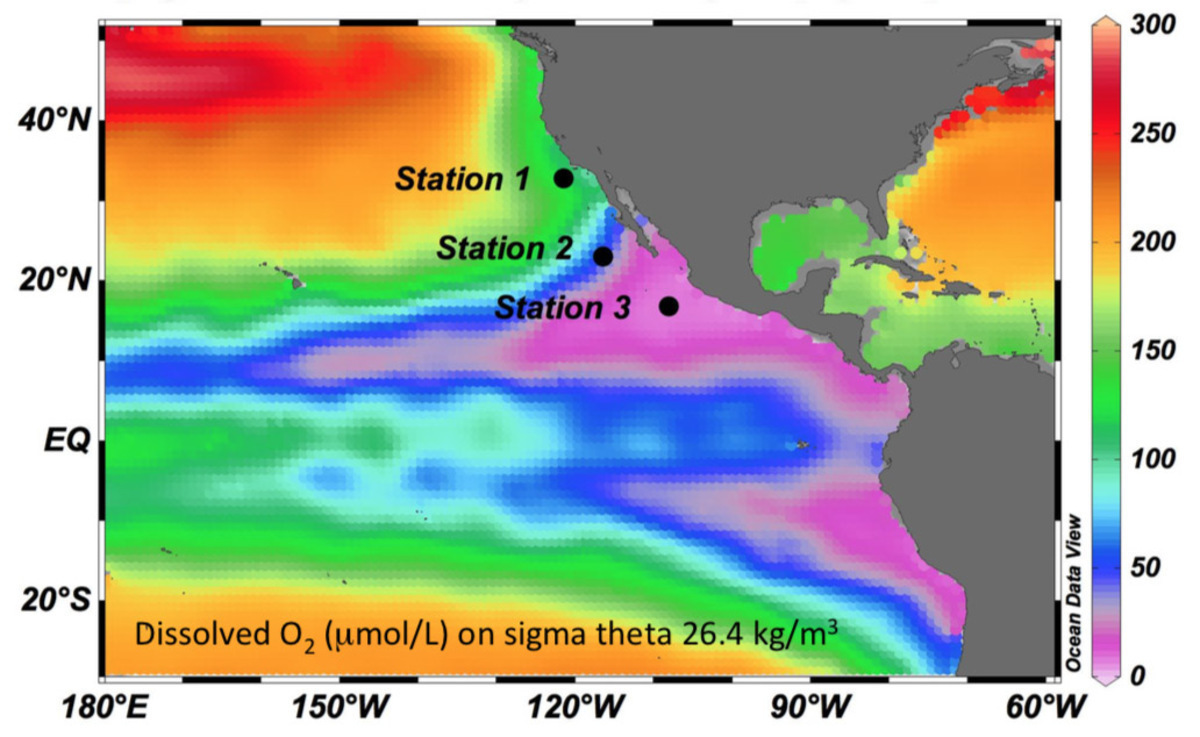 Phytoplankton form the base of the marine food web. These microscopic, single-celled organisms float in seawater, taking in carbon dioxide and using light energy to make carbohydrates. Like land plants, phytoplankton need other elements and compounds (fertilizer) to perform photosynthesis in order to survive and thrive: Nitrogen is one of these key ingredients for phytoplankton growth.

Nitrogen is fascinating and somewhat unique because it cycles through many oxygenation states. This means that there is plenty of energy for organisms to harness and the nitrogen cycle can be used as a lens to understand microbial communities. The quantity of “fixed nitrogen” in the ocean, usually nitrate (NO3–) and ammonium (NH4+), is critical for the existence and development of phytoplankton, and plays a role in the biological carbon pump sequestering carbon dioxide from the atmosphere.

Being able to recognize the role of fixed nitrogen in ocean processes is important for understanding low-oxygen areas in the world’s oceans. Insight into microbial interactions in oxygen deficient waters will allow researchers to better predict the marine response to increased nutrient runoff, eutrophication, and hypoxia – all of which currently threaten the livelihoods of many coastal communities as a warming climate leads to the expansion of low oxygen “dead” zones.

Oxygen Deficient Zones (ODZs) are critical for the carbon, nitrogen, and energy balances in the ocean. In order to examine this on a detailed scale, scientists need to collect water samples that contain these compounds. However, it is difficult to sample, move, and incubate seawater from ODZs without oxygen contamination – until now. During a three week expedition aboard Falkor, to one of the largest ODZs in the Eastern Tropical North Pacific, Professor Karen Casciotti, Stanford University, and Professor Andrew Babbin, Massachusetts Institute of Technology, will attempt to find a solution with new technology.

Collaboration between oceanographers, chemists, microbial experts, and mechanical engineers will allow the team to develop technology that autonomously incubates and documents microbial processes. These measurements are traditionally conducted shipboard using water samples that are placed in simulated conditions to where they were obtained. The team aboard Falkor will assess the new device’s performance against traditional methods, with state of the art incubations on the ship to determine accuracy, and measure the rates of nitrogen transformation in the region. 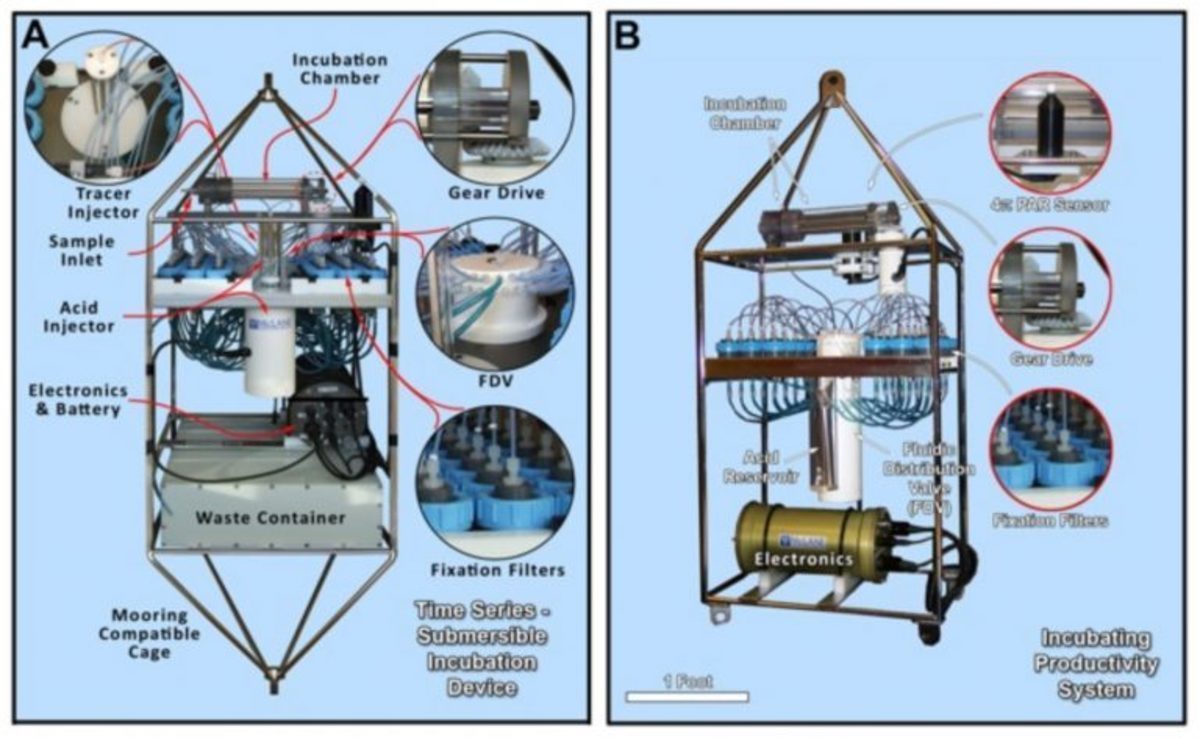 A new generation of autonomous in situ incubation devices that take measurements and record data will be tested and modified by the science team. Prototyped by McLane Research and in collaboration with Dr. Craig Taylor and Dr. Ginny Edgcomb, Woods Hole Oceanographic Institution, the new devices have been designed to autonomously fill an incubation chamber with seawater, conduct experimental treatments, and subsample the incubation at set intervals. Only a few tests have been able to capture water and incubate it at the same depth, and rarely in ODZs.

The team anticipates that oxygen will be leached out of the incubator when first deployed in the ODZ, so that after an initial “soak”, the scientists will be able to initiate experiments in truly oxygen-free conditions. The system can then be used to measure the rates of Nitrogen cycle processes at a variety of depths and corresponding levels of oxygen, nitrite, and ammonium in the water column.

By creating devices that carry out instructions underwater, efficiency will be increased, while preventing topside atmospheric contamination of samples. It will also help scientists to understand altered nitrogen content in a changing ocean and answer fundamental questions about microbes in these regions. Once refined, this technology will be applicable to a wide variety of important questions in marine science, and has the potential to be an irreplaceable tool in future studies.

View the original cruise log at the Schmidt Ocean Institute 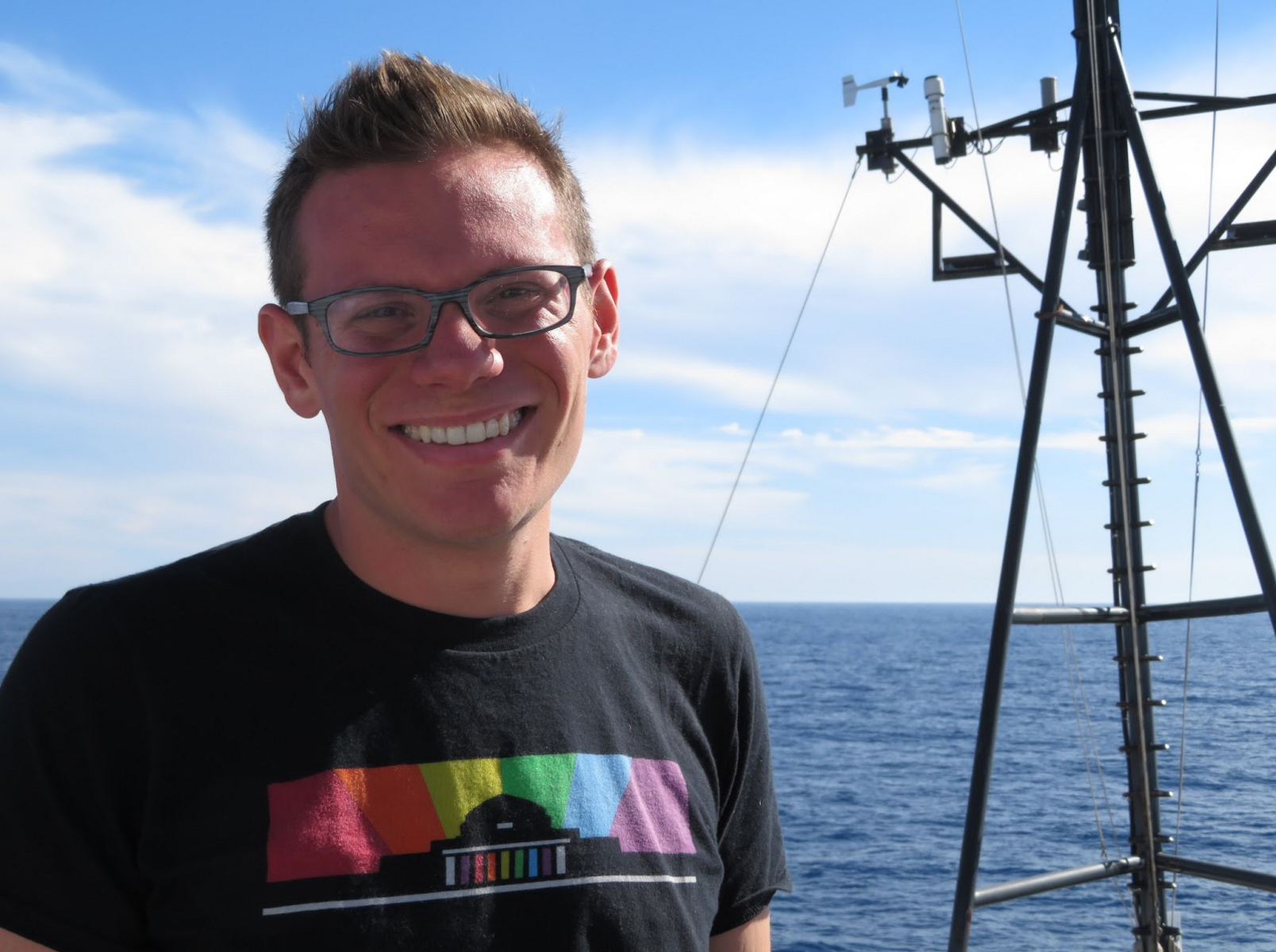 Andrew Babbin is a marine biogeochemist, working on the nitrogen cycle, and especially on the processes that return fixed nitrogen in the ocean back to nitrogen gas. This work is relevant, for instance for understanding the controls on marine productivity and the ocean’s potential for storing carbon. In his short career, Andrew has already made some major contributions to this field, especially with regard to the contributions of anaerobic metabolisms (e.g. ammonium oxidation (anammox) and denitrification) in the ocean.

Schmidt Ocean Institute is a 501(c)(3) private non-profit operating foundation established in March 2009 to advance oceanographic research, discovery, and knowledge, and catalyze sharing of information about the oceans. Mission: To combine advanced science with state-of-the-art technology to achieve lasting results in ocean research, to catalyze sharing of the information, and to communicate this knowledge to audiences around the world.  The Schmidt Ocean Institute fosters a deeper understanding of our environment.

Spring Break on the Black Pearl?

Videos from the Cruise: