Snowballs and Fossils and Bears

Why do we go to Svalbard?

What's special about Svalbard? I get asked that question a lot. The terrain is rugged. The working conditions are harsh. In the three summers I've done field work up there, I've seen snow, cold winds, fog and big waves. On four occasions, I've encountered polar bears while out working; the members of my lab group and I have had to train to use firearms and flares to prepare for these chance encounters with these potentially dangerous animals. Just getting to our field sites in Svalbard requires expensive helicopter flights or boat charters. Despite everything, and perhaps in part because of it, I love doing research in Svalbard.  The landscape is spectacular and I feel lucky to have had such extended opportunities to work in this incredible yet rapidly changing arctic environment.

My lab group is working in Svalbard because of the amazing scientific potential of its rocks. Svalbard is one of the only places in the world that records the time before, during, in between and after two global glaciations all in the same location.  In Svalbard, the global glaciations, so called "Snowball Earth" events, are bracketed by an exceptional fossil record of microscopic organisms. The Svalbard stratigraphy also preserves multiple large negative carbon isotope excursions in the carbonates, features of the Neoproterozoic record that remain a puzzle.

What are some of the questions our research seeks to answer there?

At the largest scale, we are interested in understanding the relationship between Earth’s climate and the evolution and diversification of complex life. So, what was ancient climate like, and how variable was it when eukaryotes (the group of organisms that includes plants, fungi, and animals, among others) diversified and animals originated?

Both climate change and evolution and extinction events make significant changes to the sedimentary record, and we are very interested to understand how Neoproterozoic (1000-541 million years ago) sedimentary rocks reflect these two drivers.

We use a variety of tools to answer these research questions and others, including fieldwork, drone technology, clumped isotope thermometry, petrography and microanalytical techniques. We are working at the Stanford Synchrotron Radiation Lightsource (SSRL) as well as collaborating with Roger Summons here at MIT and researchers at Dartmouth, Oxford, and Yale.

The rocks we study in Svalbard span a long time period (~1 billion years to ~460 million years ago in the Ordovician Period). They capture many different environments and climates through that time period: everything from extreme cold periods and global glaciations to warm periods and deglaciations. Svalbard was near the equator for much of this time, but that didn’t save it from being glaciated during these global Snowball Earth events.

Many of the rocks preserve evidence microbial communities in the form of fossilized structures called 'stromatolites,’ as well as diverse complex eukaryotic microfossils. In the youngest stratigraphy we are looking at (from the Cambrian and Ordovician—approximately 541­­–443 million years ago) the environments hosted large complex marine animals including distinctive trilobites and graptolites.

What sort of rocks do we study? What processes came to result in Svalbard's sedimentary rocks?

We study carbonate sedimentary rocks, such as limestone, that formed in ancient oceans. These rocks precipitated from seawater and reflect the physical, biological, and chemical environment of their formation. This makes them a great archive of the past world: they can tell us whether it was calm, wavy or stormy; how much oxygen was at the sediment-water interface and in the shallow sediments; and what sorts of creatures were living there. Having such an extended record of marine carbonates through one of the most tumultuous time intervals in Earth's history provides a rich history to reconstruct.

What does drone technology contribute to our geological tool kit?

Drone technology is something I've been excited to add to our toolkit these last few years. In partnership with MIT Libraries, I first explored its utility in a class I taught last spring in Death Valley and we decided to use it in Svalbard this summer after our success. It allows us to ask new questions about the spatial relationships of the different rock units in a way that is impossible to do as an earthbound observer.

It is so challenging to do work in Svalbard that it becomes very important to collect as much data as possible while we are there. We can’t know when or if we will be back to a certain location. Drones allow us to capture the way the rocks sit within the surrounding strata and their landscape and bring that back with us. Before drones, I used a combination of photographs and drawings to do this. Drones have added a new, quantitative, large-scale approach to our fieldwork. We are also incorporating drone and video footage we filmed in Svalbard into an MITx course that will launch in the Spring of 2019 to provide an opportunity for students to experience these rocks when they may not otherwise have the opportunity to visit such a remote place. 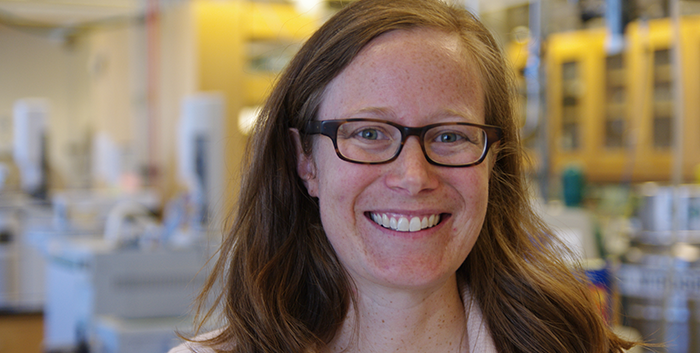 Kristin Bergmann applies sedimentology and stratigraphy, stable isotope geochemistry of carbonates including clumped isotope thermometry, and geobiology to reconstruct the record of environmental change from observations of sedimentary rocks spanning the Precambrian (before the time complex animals with mineralized skeletal remains appear in the fossil record) and the end Ordovician (when the so-called Ordovician-Silurian extinction event brought to an end the tremendous expansion of life during the Ordovician Era.)

To date Bergmann's work has focused on marine carbonate sedimentary rocks and fossils from sites that include locations in the United States, and Oman, as well as Svalbard. She analyzes the rocks using a variety of tools in order to better understand how the chemistry and climate of the oceans and atmosphere affected the evolution of complex life, from unicellular microbial communities to multicellular animal communities. Her research has multiple important components including placing constraints on the environmental change that provides a backdrop for early evolution but also quantifying the range of climatic conditions the earth system is capable of. 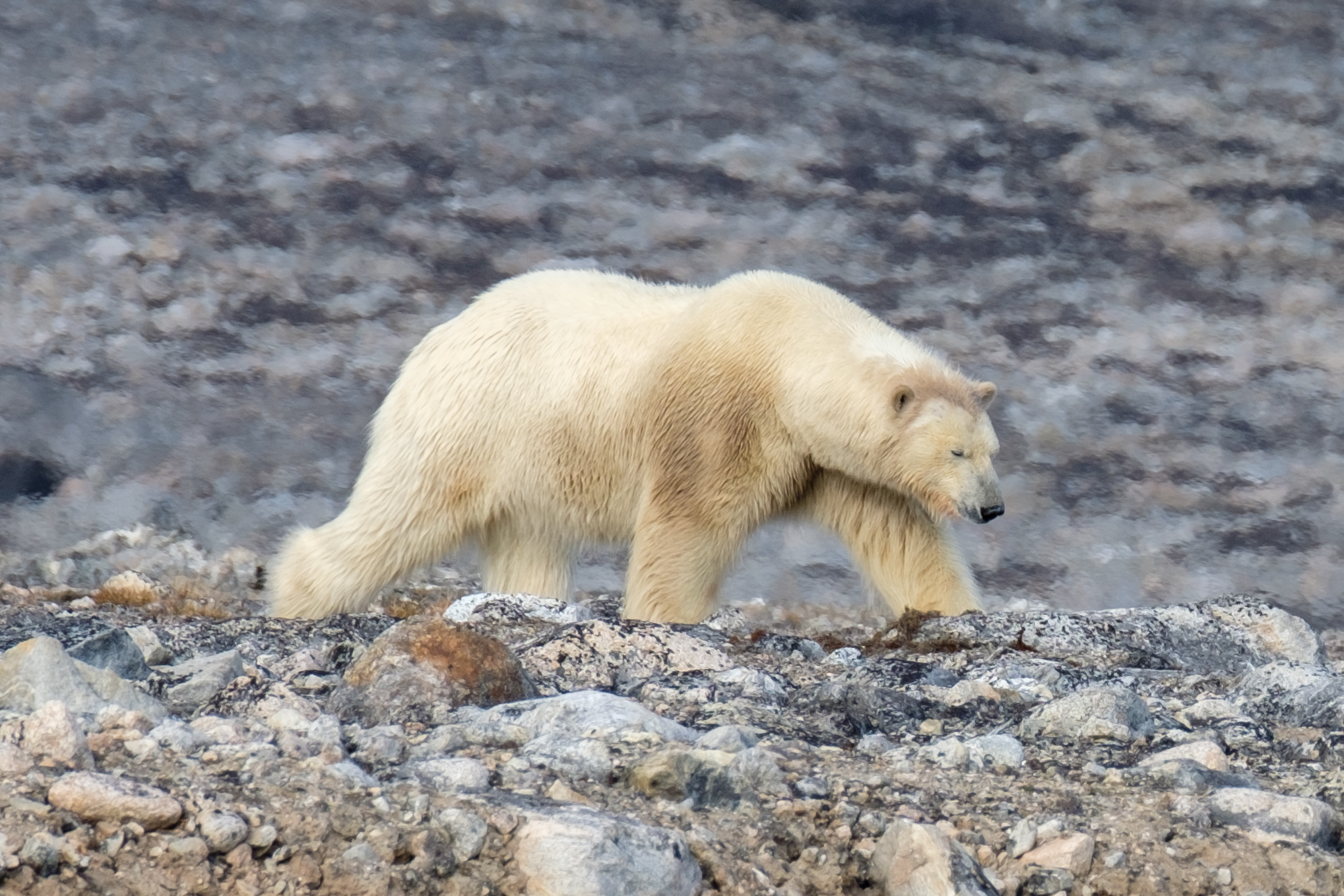 Polar Bear photographed in NE Svalbard from our boat. The bear was one of several feeding on a nearby rotting whale carcass - Image credit: Adam Jost 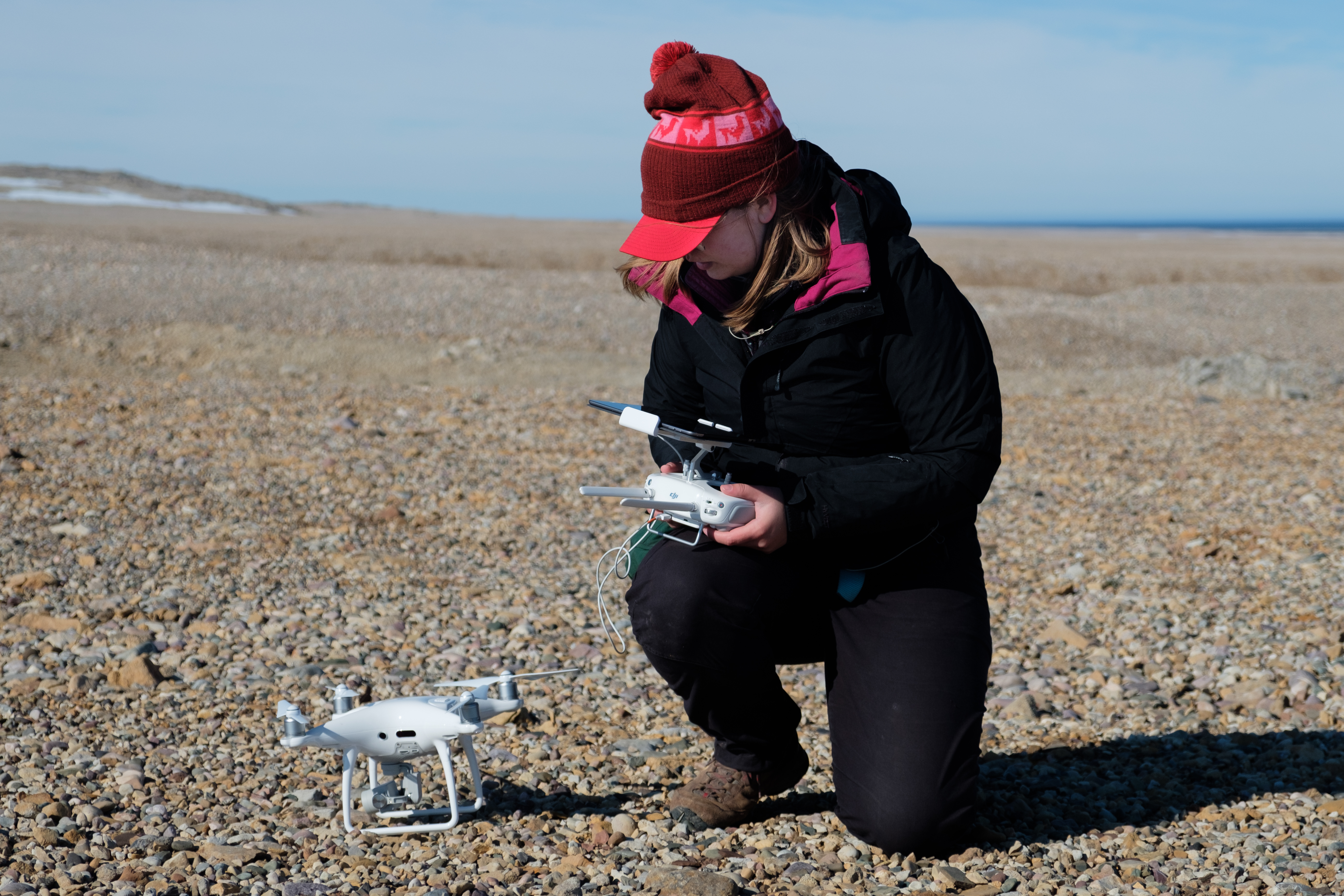 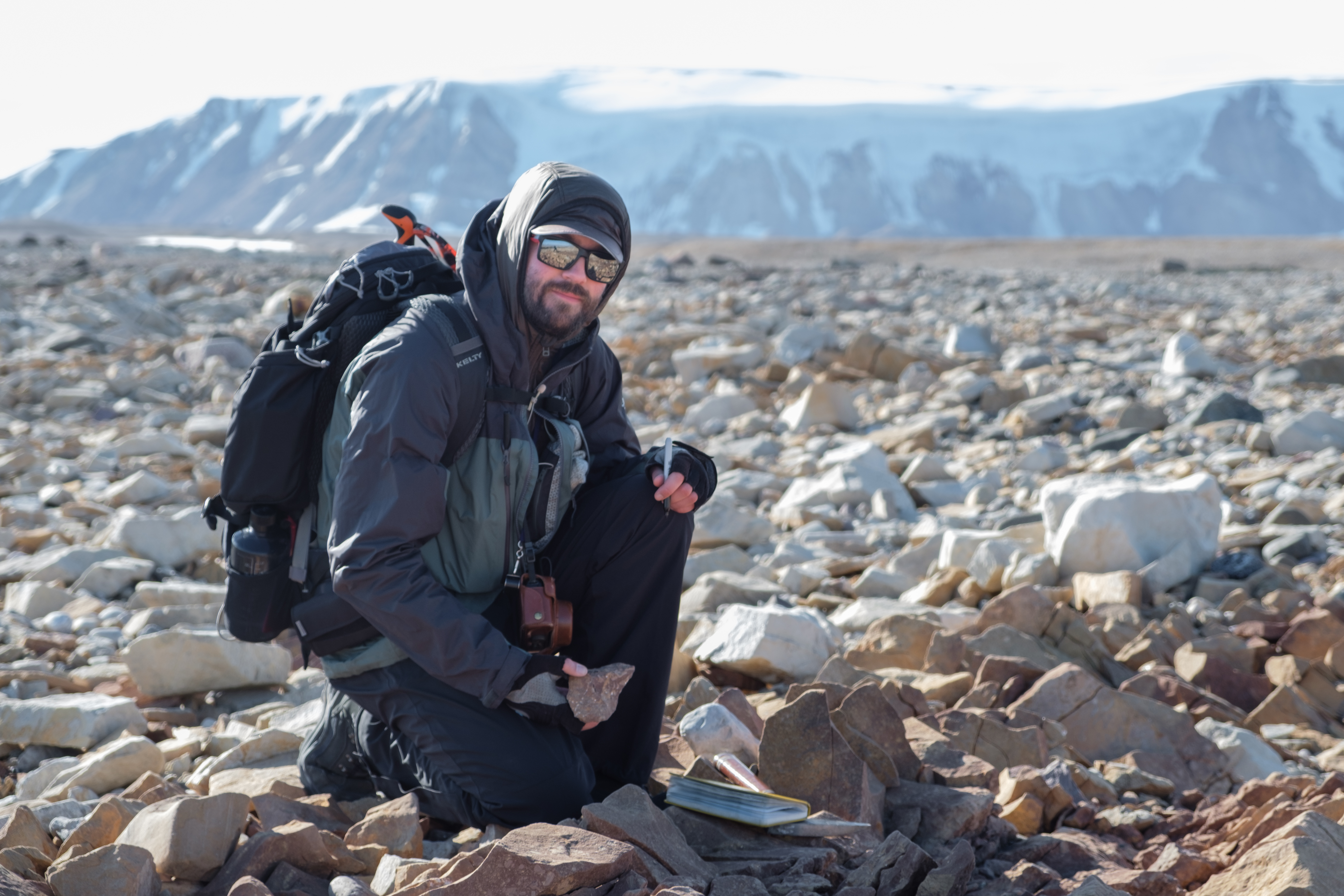 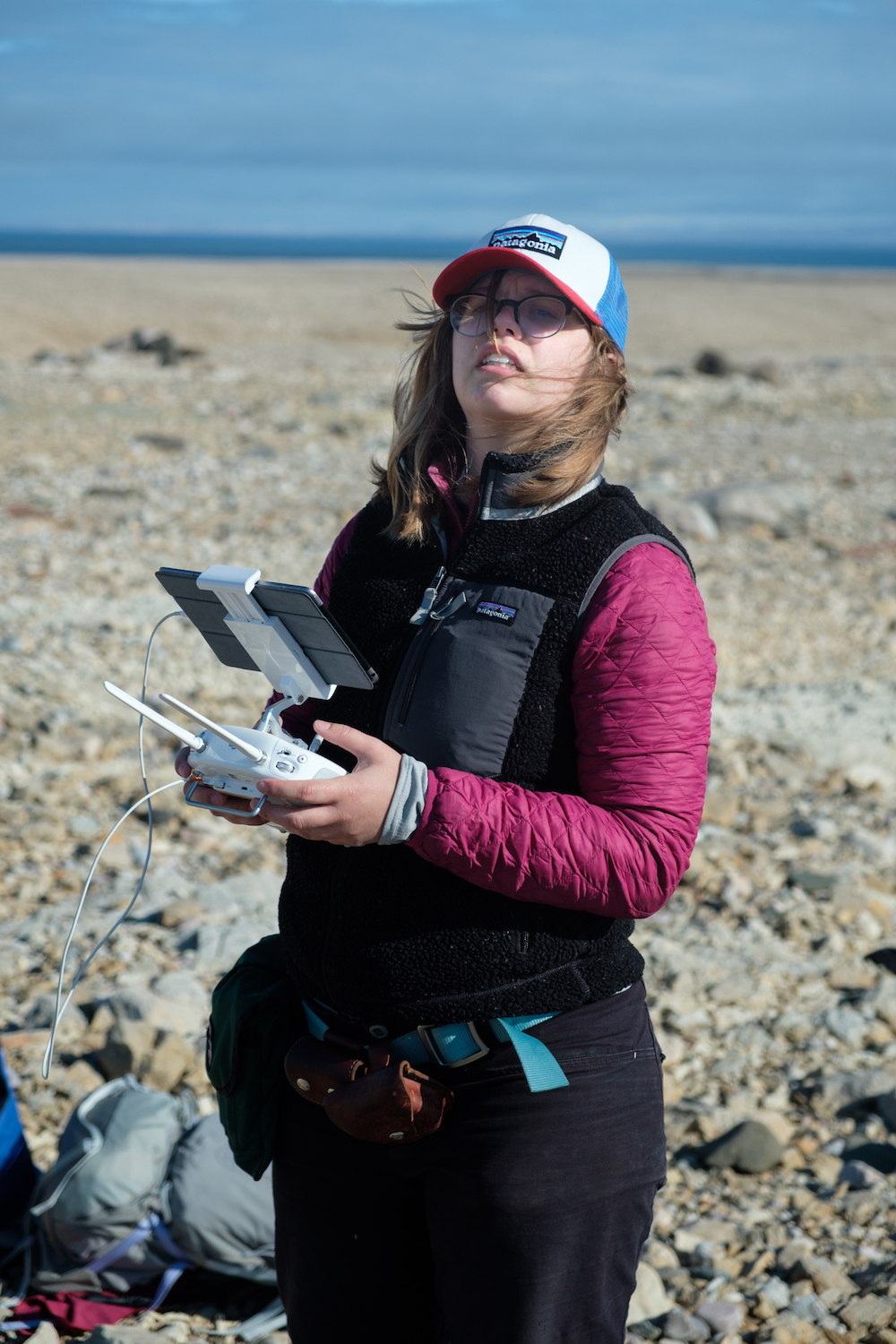 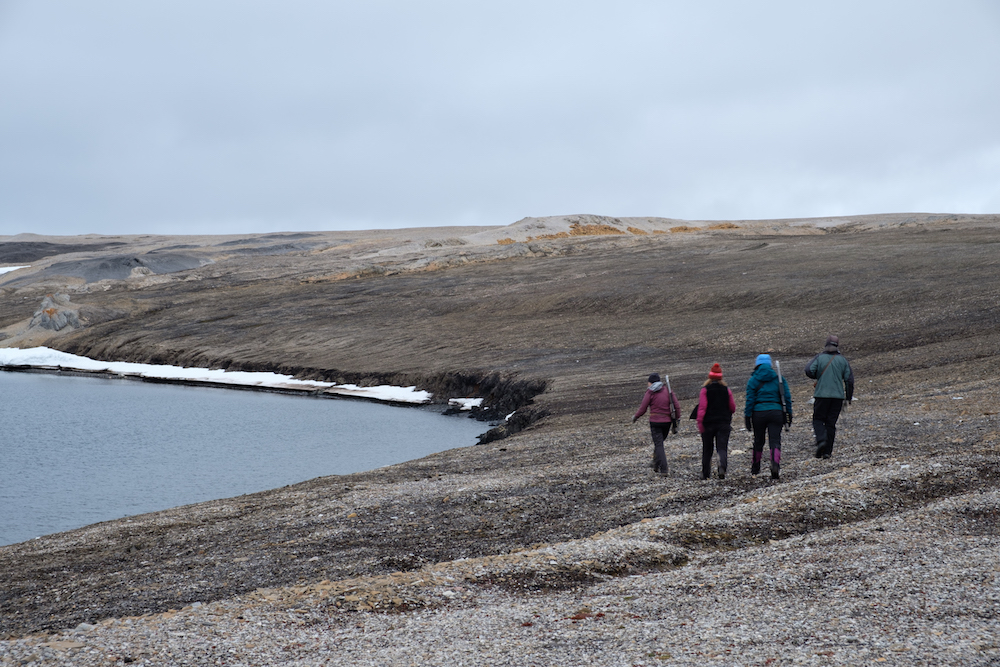 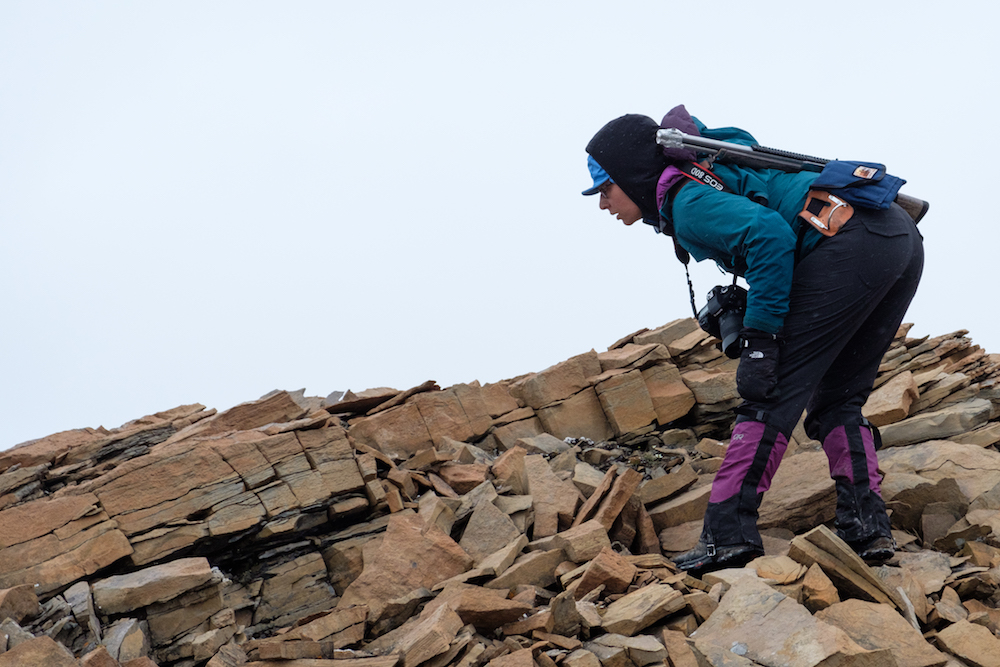 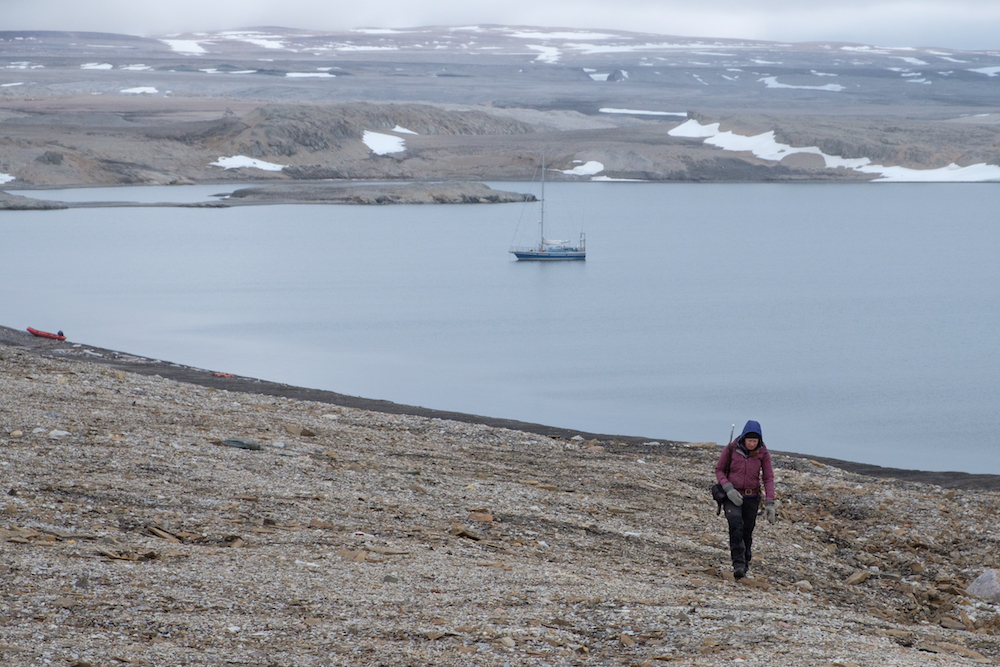 Kristin Bergmann walking between outcrops in Nordaustlandet, NW Svalbard. In the background, our ship—the Arctica II, and on the far left, the red zodiak we used to get from ship to shore - Image credit: Adam Jost 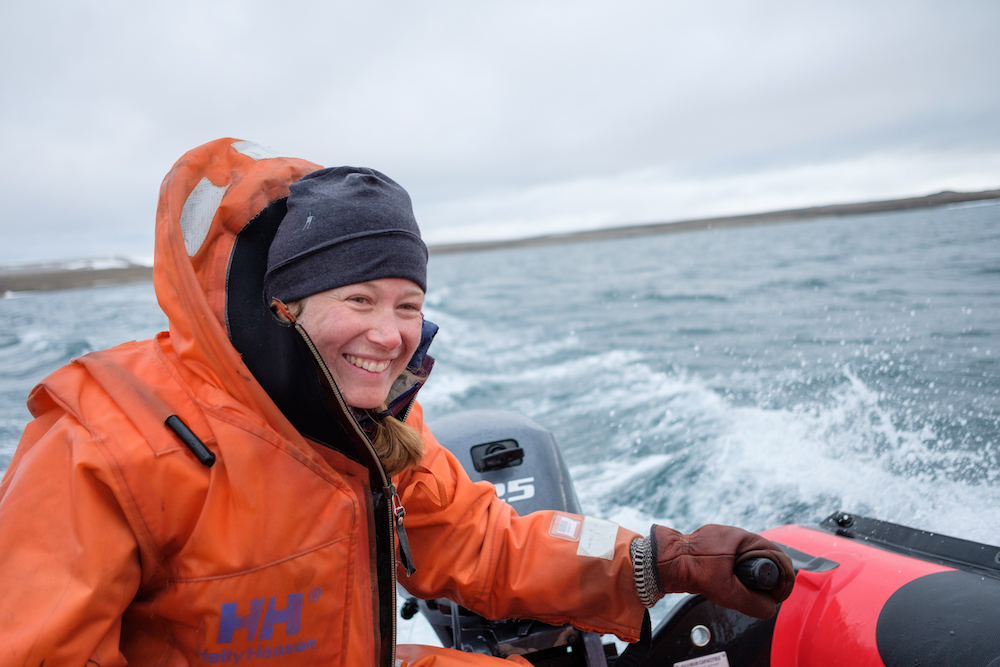 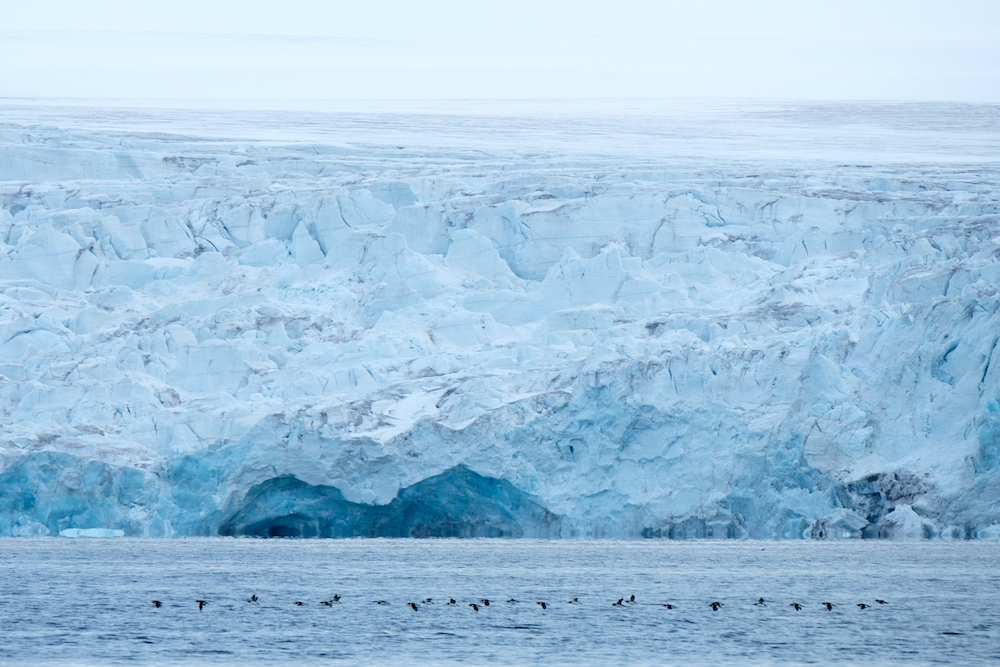 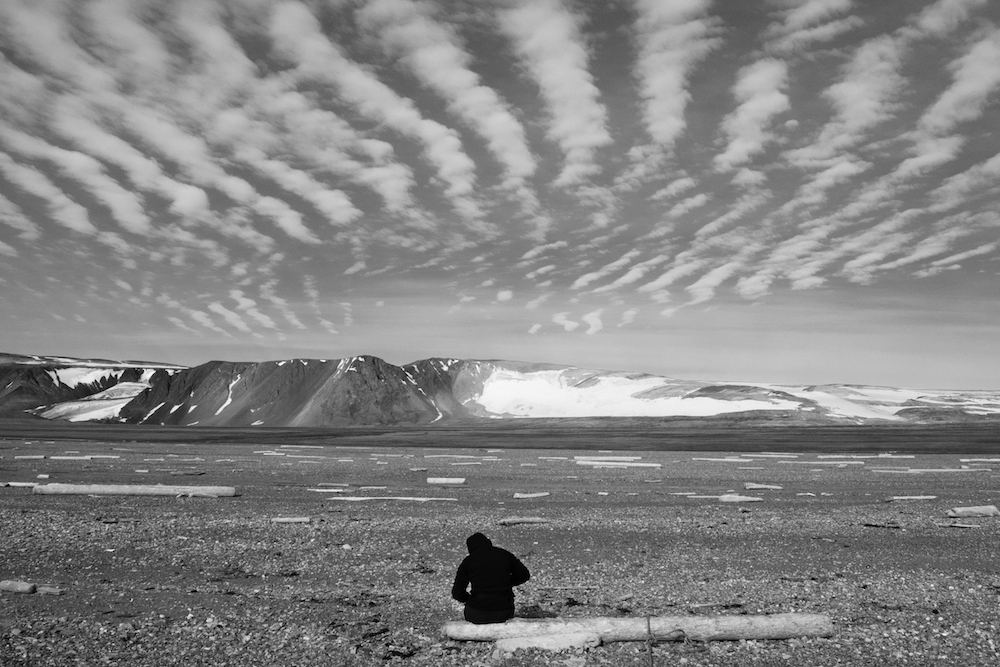 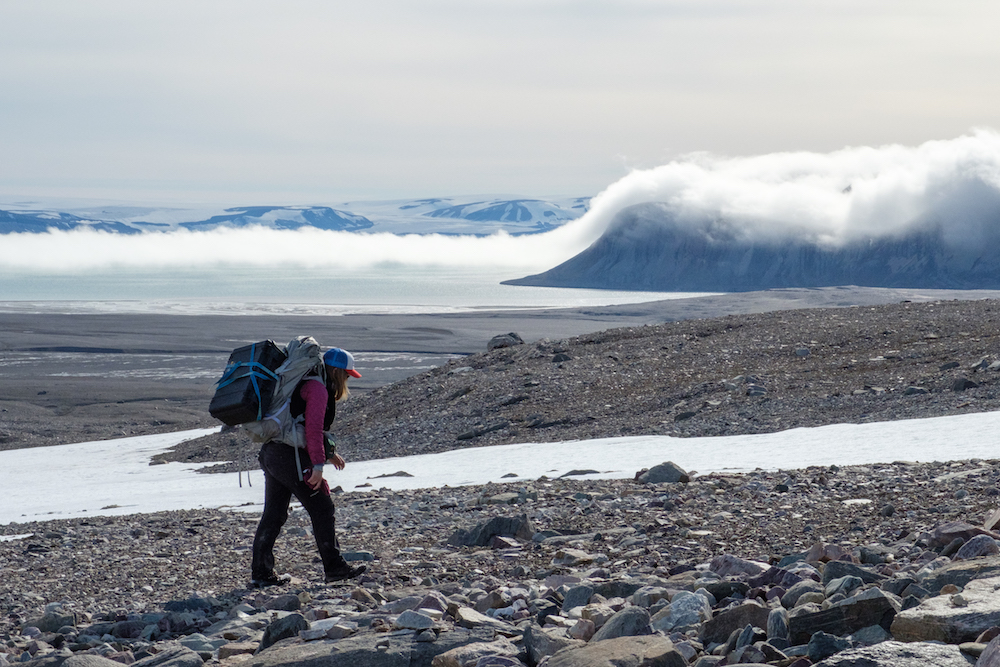