Sharks Take 'Tunnels' into the Depths

Camrin Braun, a graduate student in the MIT-WHOI Joint Program, and researchers at the University of Washington have discovered that sharks follow warm-water Gulf Stream eddies to dive into the depths to find food.

Read this story at Oceanus Magazine

Support for this research was provided by the WHOI Ocean Life Institute, OCEARCH, NASA, and the National Science Foundation.

Story Image: Researchers with the nonprofit shark research organization OCEARCH placed two types of tracking tags on a great white shark on the platform of the OCEARCH research vessel off the coast of Jacksonville, Fla., in March 2013. The shark, named Lydia, was 14.5 feet long and weighed slightly less than one ton when she was tagged. Camrin Braun, a graduate student in the MIT-WHOI Joint Program in oceanography, used data collected from the tags to reveal that sharks use eddies to dive deep to find food. (OCEARCH/Rob Snow) 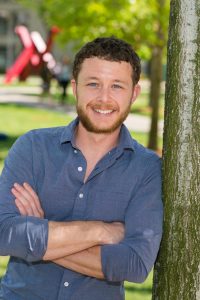 Camrin Braun is fascinated by marine life of our planet. In 2010, he joined a team of experts who employ cutting edge techniques to understand the ecology of the world’s most important fishes. Since, he has been elected a National Geographic Young Explorer and become a member of the Explorer’s Club. His expeditions have ranged from sailing the remote Pacific to understand coral reefs to tagging sharks in Sudan. In 2012, Camrin joined King Abdullah University of Science and Technology (Thuwal, Saudi Arabia) to pursue a master’s degree in marine science where he used animal tagging to explore manta ray ecology in the Red Sea. He is now pursuing his doctoral degree in Oceanography at Massachusetts Institute of Technology and the Woods Hole Oceanographic Institution where he explores the relationship between the movements of large, open ocean fishes and the physical, chemical, and biological environment they inhabit. He hopes this work will directly improve management of these important fish populations and keep them in our ocean for future generations.

The Secret Lives of Sharks
A video on Camrin Braun