Dr. Ainara Sistiaga from the Summons Lab was recently interviewed by Horizon Magazine on the evolution of human diets.

Read this story at Phys.org

Mummified bodies from Egypt and the Canary Islands are having their digestive tracts tested and compared to living people in order to reveal how the bacteria in our guts has changed over the centuries and how it varies between people with different diets.

It's part of a recent wave of research into what's known as the gut microbiome - the collection of bacteria that live in our digestive system - which also includes looking at how these bacteria influence obesity. It is thought that the more diverse the mix of bacteria in your gut, the healthier you are.

"Western populations have already lost 30 % of the biodiversity of their gut microbiome," said Spanish scientist Dr Ainara Sistiaga. She is examining mummies from Egypt and the Canary Islands to better understand the microbiome of our ancestors.

"We are discovering every day how important our microbiome is to our biology, even our mood, and many diseases are related to gut bacteria," said Dr Sistiaga.

Yet little is known about how this vital microbial cargo changed during our evolution and as we moved from being hunter-gatherers to farmers and to a diet rich in processed food. It could be hugely beneficial to know what sorts of bacteria lived inside our ancestors and what we have lost, says Dr Sistiaga.

Right now scientists do not have the tools to understand the microbiome of people from bygone times, but this is a goal of Dr Sistiaga's EU-funded research project, MIND THE GUT. She will search for tell-tale lipid compounds, proteins and DNA from bacteria in the bodies of mummies and people today.

"Lipids stay around for longer and might tell us which gut bacteria were around," explained Dr Sistiaga, who is affiliated with the Massachusetts Institute of Technology, in the US, and the University of Copenhagen, Denmark.

She will study two types of mummies. First, she'll take small samples from the gut of mummies preserved on the Canary Islands which date from before the Spanish conquest of the 15th century. Those from the island of Tenerife were pastoralists, while those from Gran Canaria were likely farmers. They mostly date from between the 9th and 13th century.

The other type are Nubian mummies from Egypt in the British Museum who were people who died in the Nubian desert around the 9th to 10th century and were naturally mummified by the dry conditions there.

Dr Sistiaga will compare the microbiome of mummies to the hunter-gathering Hadza group living in Tanzania and a separate pastoralist community called Datoga living nearby. "This study will help us understand what a healthy microbiome is and how it adapts to different environments, diets and lifestyles," she said. She previously studied organic compounds from Neanderthal waste, which showed that they ate plants.

Health lessons for modern times might come from this bio-archaeology project, which will also examine human waste to identify signatures, or biochemical markers, from the gut microbiome.

"The main goal though is to provide tools to better understand our ancestral microbiome," said Dr Sistiaga. "Some traditional populations still have strains that help them face challenges, such as extreme cold or rotten food or other difficult situations. If we can get more information on the benefits of all these bacteria, we might be able to be more resilient to challenges ourselves."

Each of us carries in our gut a two-kilo microbial horde that is part and parcel of our biology. The work of these microorganisms – which could number 100 trillion individual cells – is recognised as essential to our health.

Scientists have learned that you can either host a diverse and healthy collection of intestinal bugs or perhaps a more minimalist, unhealthy collection. A high-fat Western diet can encourage an unhealthy microbiome, which often is found in those who are overweight. Worryingly, this situation is linked to diabetes, high blood pressure, inflammation and cardiovascular disease. Therefore, anything we can do to promote healthy bugs in our guts is a plus.

Those who eat lots of fruit and vegetables carry around lots of an odd-sounding intestinal bacterium, Akkermansia muciniphila. This mucus-eating bug was first isolated in 2004 by a team working under Professor Willem de Vos at Wageningen University in the Netherlands. It makes up 5 % of bugs in a healthy gut, but in overweight people, it can be almost entirely absent.

"This bacteria lives close to intestinal cells in the colon," said Professor Patrice D. Cani at the Université catholique de Louvain, in Belgium.

What makes this bug truly interesting is what happens when it is fed to obese mice. It reduces their weight gain, cuts down on their bad cholesterol and dampens inflammation. Human studies hint at benefits too: obese people with more of this bacteria in their gut at the start of a six-week diet displayed better metabolic and heart health readings at the end.

Prof. Cani is now running an EU-supported trial – Microbes4U – to see if feeding this bacteria to people improves health metrics such as blood sugar, cholesterol levels and low-grade inflammation. Patients consume the bacteria daily for 12 weeks and are monitored for safety and tolerance first, then weight gain or loss, inflammation, circulating fats and insulin resistance.

They receive a sachet that contains either a placebo, one billion or 10 billion living bacteria, or 10 billion pasteurised bacteria. Prof. Cani and Prof. de Vos previously reported that pasteurisation boosted the effectiveness of A. muciniphila in reducing fat gain and controlling blood sugar levels in mice. The trial aims to gain insights for a larger study.

There is already much evidence that diet impacts the gut microbiome. "A diet high in dietary fibre, fruits and vegetables contain compounds like polyphenols that we know are food for our microbes," Prof. Cani said.

Worryingly, an unhealthy microbiome chips away at our gut barrier. "The change caused by a high-fat, low-fibre diet changes the gut microbiome and causes leakage of some bacteria and pro-inflammatory compounds into the blood," Prof. Cani explained.

The weakened gut barrier allows compounds to leak into the blood that ramp up inflammation and are linked to metabolic syndrome: high blood sugar, abnormal cholesterol and high body fat. This increases your risk of heart disease, stroke and diabetes.

Anything that lessens this unhealthy cycle would be a huge gain for the health of European citizens. "We do not claim that this one bacteria can reverse obesity," Prof. Cani said. "But even reducing cholesterol in people would be a success." Strong scientific evidence would be needed before the bug could be used to boost health, most likely as a food supplement.

Story Image: By studying mummies, researchers want to establish how our gut bacteria has changed over time. Credit: 'MNH - Mumie Frau 1' by Wolfgang Sauber is licenced under CC-S.A 3.0 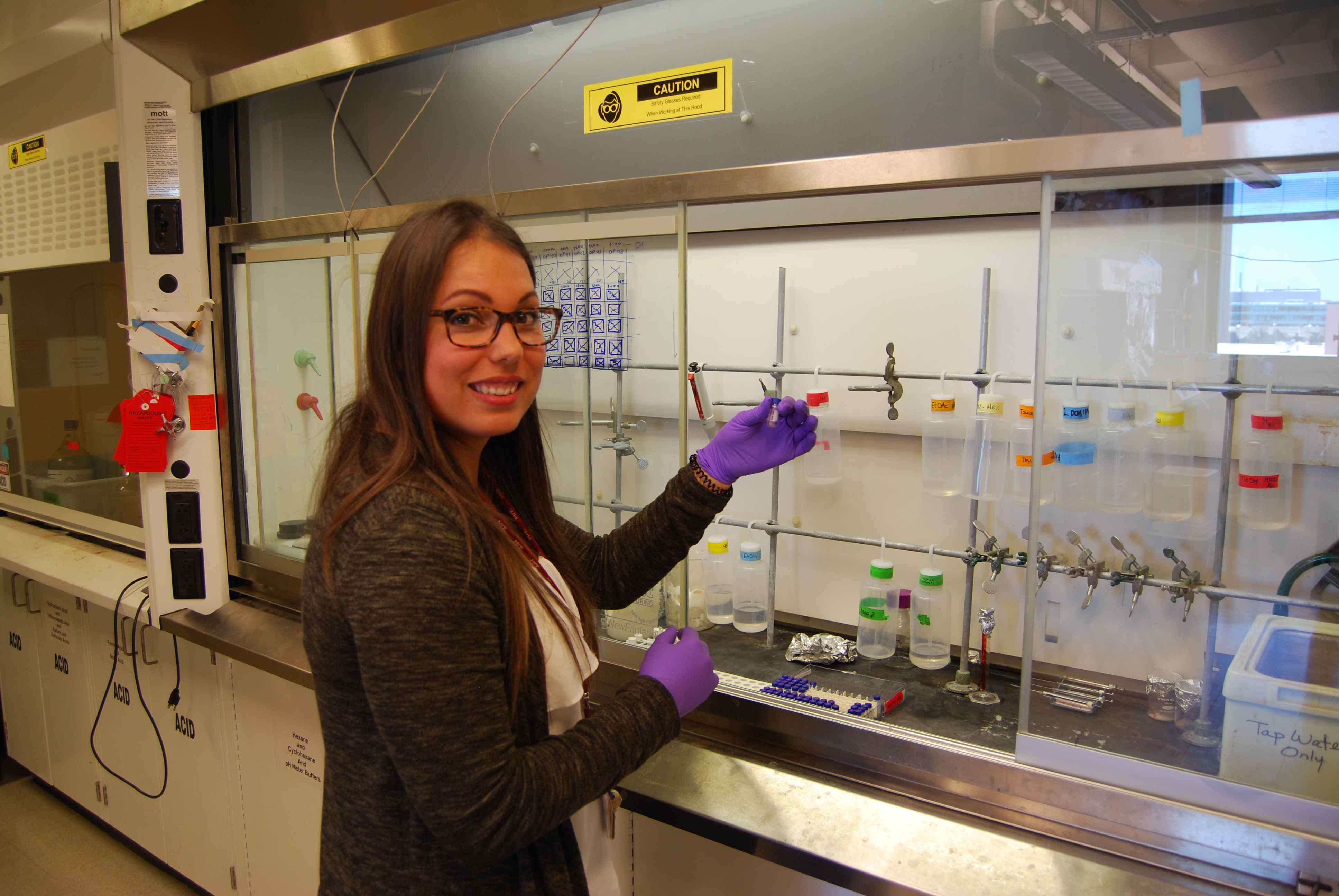 Ainara Sistiaga's research is focused on exploiting the organic information trapped in the sediment, with particular emphasis in the paleodietary record. She performs her research between organic geochemistry and paleolithic archaeology to provide greater insight into the dietary role of meat and plants during human evolution. Sistiaga is using faecal biomarkers as a source of paleodietary information, helping the understanding of the proportions of different kinds of food that contribute most to our ancestors' diets.

The Summons Lab studies organic matter from microbes, environmental samples, and rocks. Ancient rocks and oils contain a rich abundance of hidden information within, including molecular and isotopic signatures of the organisms that existed at the time the organic matter was formed. The goal of their research is to extract and interpret these signals, in order to reconstruct ancient environments and understand how life evolved within them.