New framework shows how ecological interactions among microorganisms account for nitrite accumulation just below the sunlit zone, with implications for oceanic carbon and nitrogen cycling.

Nitrogen is a hot commodity in the surface ocean. Primary producers including phytoplankton and other microorganisms consume and transform it into organic molecules to build biomass, while others transform inorganic forms to access their chemical store of energy. All of these steps are part of the complex nitrogen cycle of the upper water column.

About 200 meters down, just below the ocean’s sunlit zone, resides a layer of nitrite, an intermediate compound in the nitrogen cycle. Scientists have found this robust feature, called the primary nitrite maximum, throughout the world’s oxygenated oceans. While several individual hypotheses have been put forward, none have convincingly explained this marine signature until now.

A recent Nature Communications study led by researchers in the Program in Atmospheres, Oceans and Climate (PAOC) within MIT’s Department of Earth, Atmospheric and Planetary Sciences (EAPS) uses theory, modeling, and observational data to investigate the ecological mechanisms producing the observed nitrite accumulation and dictating its location in the water column. Lead author Emily Zakem — a former EAPS graduate student who is now a postdoc at the University of Southern California — along with EAPS Principal Research Scientist Stephanie Dutkiewicz and Professor Mick Follows show that physiological constraints and resource competition between phytoplankton and nitrifying microorganisms in the sunlit layer can yield this ocean trait.

Despite its low oceanic concentration, nitrite (NO2-) plays a key role in global carbon and nitrogen cycles. Most of the nitrogen in the ocean resides in the inorganic form of nitrate (NO3-), which primary producers and microorganisms chemically reduce it to build organic molecules. Remineralization occurs when the reverse process takes place: Phytoplankton and other heterotrophic bacteria break down these organic compounds into ammonium (NH4+), a form of inorganic nitrogen. Ammonium then can be consumed again by primary producers, which get their energy from light. Other microorganisms called chemoautotrophs also use the ammonium both to make new biomass and as a source of energy. To do this, they extract oxygen from seawater and transform it, a process called nitrification, which occurs in two steps. First, the microbes convert ammonium into nitrite and then to nitrate.

Somewhere along the line, nitrite has been accumulating at the base of the sunlit zone, which has implications for ocean biogeochemistry. “Broadly, we’re trying to understand what controls the remineralization of organic matter in the ocean. It’s that remineralization that is responsible for forming the biological pump, which is the extra storage of carbon in the ocean due to biological activity,” says Zakem. It’s this strong influence that nitrogen has on the global carbon cycle that captures Follows’ interest. “Growth of phytoplankton on nitrate is called ‘new production’ and that balances the amount that’s sinking out of the surface and controls how much carbon is stored in the ocean. Growth of phytoplankton on ammonium is called recycled production, which does not increase ocean carbon storage,” Follows says. “So we wish to understand what controls the rates of supply and relative consumption of these different nitrogen species.” 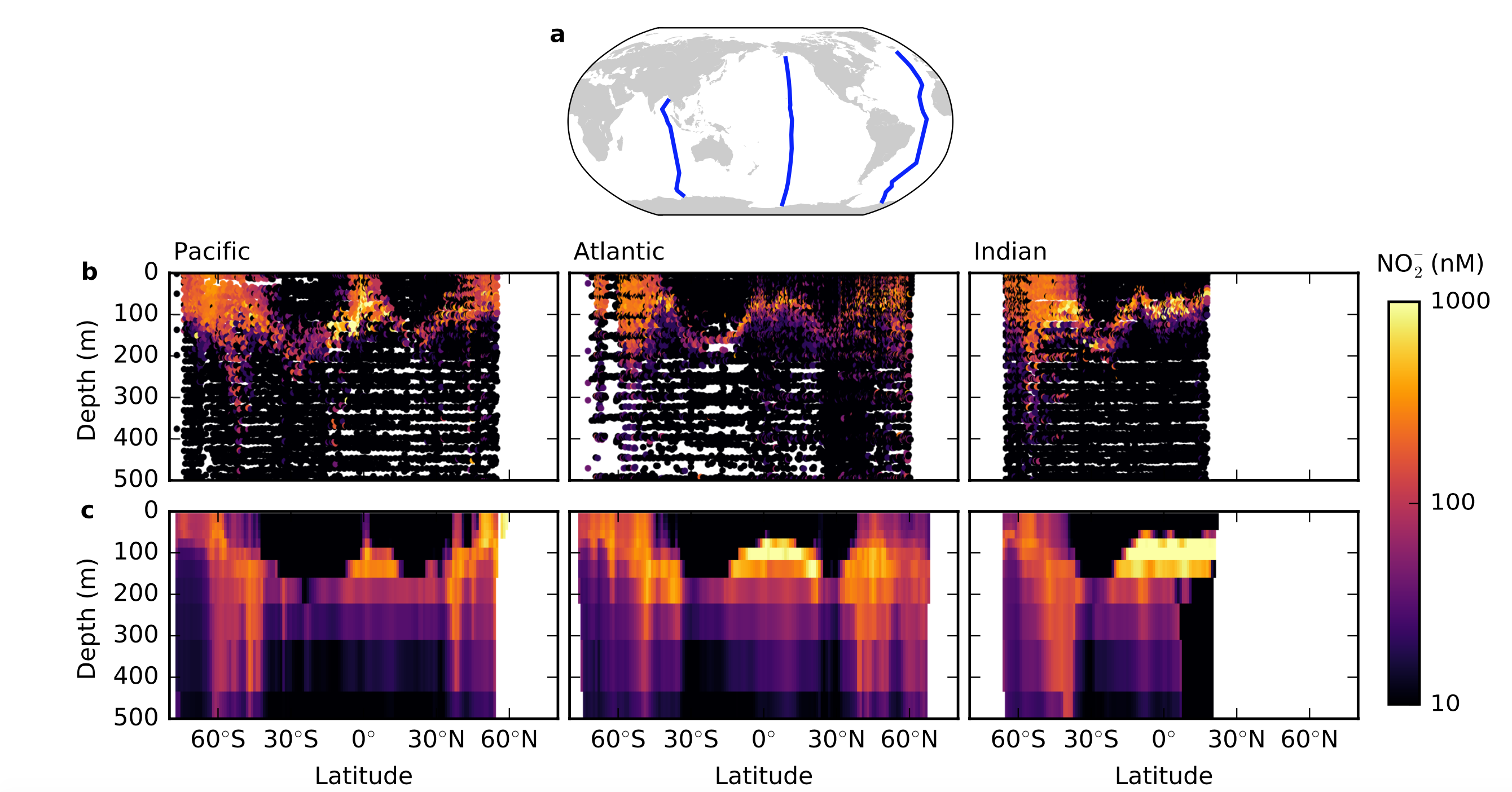 Vertical profiles of nitrite concentration across three ocean transects in an ecosystem model. (Photo: courtesy of the authors)

The primary nitrite maximum resides between two groups of microorganisms in most of the world’s oceans. Above it in the sunlit zone are the phytoplankton, and in the primary nitrite maximum and slightly below that rest an abundance of nitrifying microbes in an area with high rates of nitrification. Researchers classify these microbes into two groups based on their preferred nitrogen source: the ammonium oxidizing organisms (AOO) and nitrite oxidizing organisms (NOO). In high latitudes like the Earth’s subpolar regions, nitrite accumulates in the surface sunlit zone as well as deeper.

Scientists have postulated that there might be two not mutually exclusive reasons for the build-up of nitrite: Nitrification by chemoautotrophic microbes, and when stressed, phytoplankton can reduce nitrate to nitrite. Since isotopic evidence does not support the latter, the group looked into the former.

“The long-standing hypothesis was that the locations of nitrification were controlled by the inhibition of light of these [nitrifying] microorganisms, so the microorganisms that carry out this process were restricted from the surface,” Zakem says, implying that these nitrifying chemoautotrophs got sunburned. But instead of assuming that was true, the group examined the ecological interactions among these and other organisms in the surface ocean, letting the dynamics fall out naturally. To do this they collected microbial samples from the subtropical North Pacific and evaluated them for metabolism rates, efficiencies and abundances, and assessed the physiological needs and constraints of the different nitrifying microbes by reducing the biological complexity of their metabolisms down to its underlying chemistry and thus hypothesizing some of the more fundamental constrains. They used this information to inform the dynamics of the nitrifying microbes in both a one-dimensional and three-dimensional biogeochemical model.

The group found that by employing this framework, they could resolve the interactions between these nitrifying chemoautotrophs and phytoplankton and therefore simulate the accumulation of nitrite at the primary nitrite maximum in the appropriate locations. In the surface ocean when inorganic nitrogen is a limiting factor, phytoplankton and ammonium oxidizing microbes have similar abilities to acquire ammonium, but because phytoplankton need less nitrogen to grow and have a faster growth rate, they are able to outcompete the nitrifiers, excluding them from the sunlit zone. In this way, they were able to provide an ecological explanation for where nitrification happens without having to rely on light inhibition dictating the location.

Comparing the fundamental physiologies of the nitrifiers revealed that differences in metabolisms and cell size could account for the nitrite build-up. The researchers found that the second step of the nitrification process that’s carried out by the nitrite oxidizers requires more nitrogen for the same amount of biomass being created by these organisms, meaning that the ammonia oxidizers can do more with less, and that there are fewer nitrite oxidizers than the ammonia oxidizers. The nitrite oxidizing microbes also have a higher surface to volume constraint than the smaller and ubiquitous ammonium oxidizing microbes, making nitrogen uptake more difficult. “This is an alternative explanation for why nitrite should accumulate,” Zakem says. “We have two reasons that point in the same direction. We can’t distinguish which one it is, but all of the observations are consistent with either of these two or some combination of both being the control.”

The researchers were also able use a global climate model to reproduce an accumulation of nitrite in the sunlit zone of places like subpolar regions, where phytoplankton are limited by another resource other than nitrogen like light or iron. Here, nitrifiers can co-exist with phytoplankton since there’s more nitrogen available to them. Additionally, the deep mixed layer in the water can draw resources away from the phytoplankton, giving the nitrifiers a better chance at survival in the surface.

“There’s this long standing hypothesis that the nitrifiers were inhibited by light and that’s why they only exist at the subsurface,” Zakem says. “We’re saying that maybe we have a more fundamental explanation: that this light inhibition does exist because we’ve observed it, but that’s a consequence of long-term exclusion from the surface.”

“This study pulled together theory, numerical simulations, and observations to tease apart and provide a simple quantitative and mechanistic description for some phenomena that were mysterious in the ocean,” Follows says. “That helps us tease apart the nitrogen cycle, which has an impact on the carbon cycle. It's also opened up the box for using these kind of tools to address other questions in the microbial oceanography.” He notes that the fact that these microbes are shunting ammonium into nitrate near the sunlit zone complicates the story of carbon storage in the ocean.

Two researchers who were not involved with the study, Karen Casciotti, associate professor in the Stanford University Department of Earth System Science, and Angela Landolfi, a scientist in the marine biogeochemical modeling department at the GEOMAR Helmholtz Centre for Ocean Research Kiel, agree. “This study is of great significance as it provides evidence of how organisms’ individual traits affect competitive interactions among microbial populations and provide a direct control on nutrients' distribution in the ocean,” says Landolfi. “In essence Zakem et al., provide a better understanding of the link between different levels of complexity from individual- to community up to environmental level, providing a mechanistic framework to predict changes in community composition and their biogeochemical impact under climatic changes,” says Landolfi.

This research was funded by the Simons Foundation’s Simons Collaboration on Ocean Processes and Ecology, the Gordon and Betty Moore Foundation, and the National Science Foundation.