Spring Break on the Black Pearl?

Andrew Babbin is a marine biogeochemist interested in the nitrogen cycle, and especially in the processes that return fixed nitrogen in the ocean back to nitrogen gas, a process involved in controlling marine productivity, and the ocean’s potential for storing carbon.

An active sea-going oceanographer himself, this spring Babbin launched EAPS first field oceanography class (12.373 for undergrads, 12.777 for graduate students.) Aimed at providing participants with an introduction to the biogeochemistry of the ocean, and the field techniques and methods used in its study, the class included a spring break research cruise. 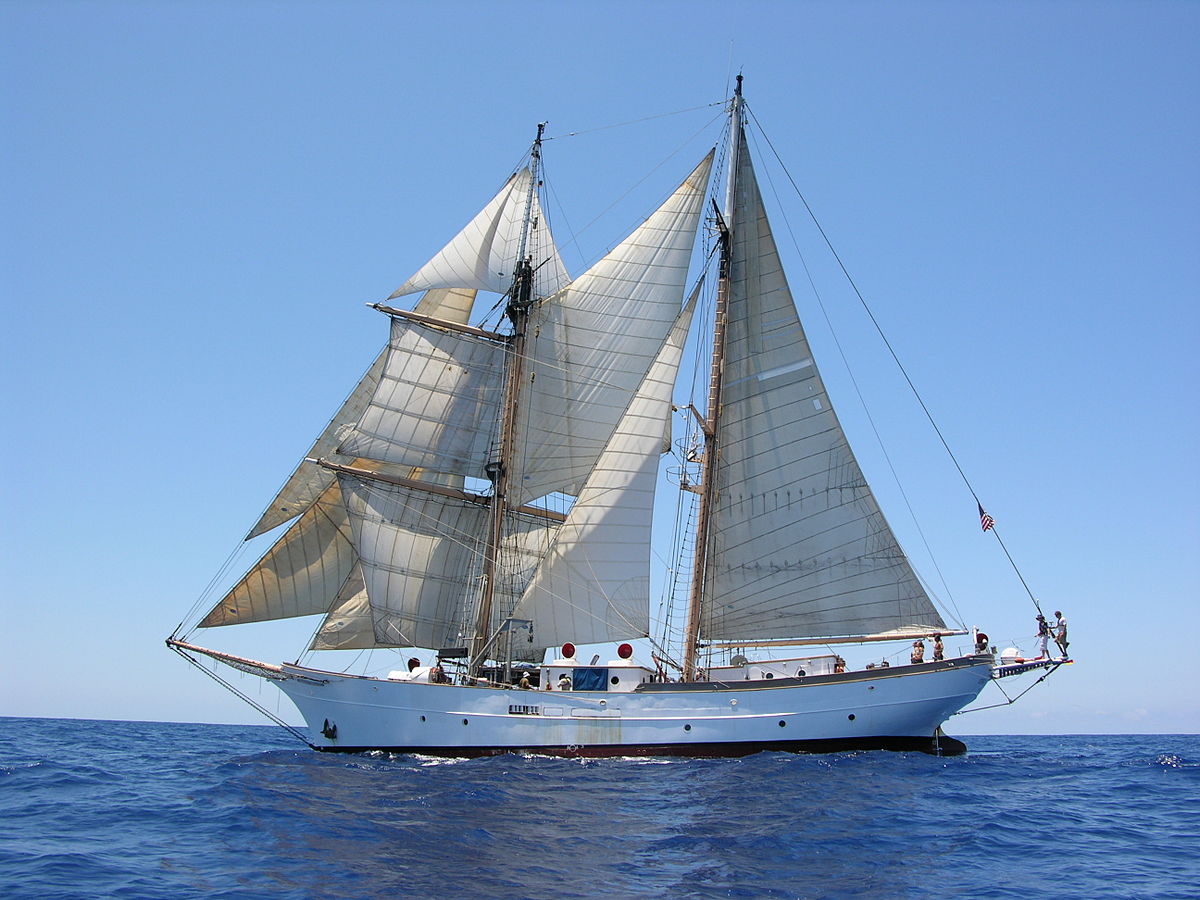 Fifteen students: five from EAPS, three from CEE, two from MechE, one from ChemE, one each from Biology and Biological Engineering, and two from Wellesley joined Prof Babbin, EAPS Research Scientist Ryan Woosley, TA, graduate student Martin Wolf, and EAPS Academic Administrator Megan Jordan for the six day return trip across the Florida Straits from Key West to the maritime border with Cuba. Aboard the SSV Corwith Cramer one of two tall ship research vessels operated by Sea Education Association, an internationally recognized leader in field-based environmental education at sea based in Woods Hole, MA, the students, didn't just collect and analyze samples but also joined the regular crew in sailing the ship itself.

Back on dry land, the students are now hard at work analyzing and synthesizing the collected data, ready to present them in publication-quality manuscripts and oral presentations. Babbin also required the students to write blog entries recounting their experiences. Below we reproduce EAPS senior Lily Dove’s. Links to all 13 can be found to the right.

Being out on the middle of the ocean with only the waves and the wind for company seems like it could be a very lonely experience. However, my time aboard the SSV Corwith Cramer was anything but lonely. With 34 people living, working, and learning aboard the 130 foot vessel, it was actually hard to find time to be alone. The waves and the wind became our irreplaceable companions on the voyage, making our trip smooth and unforgettable. 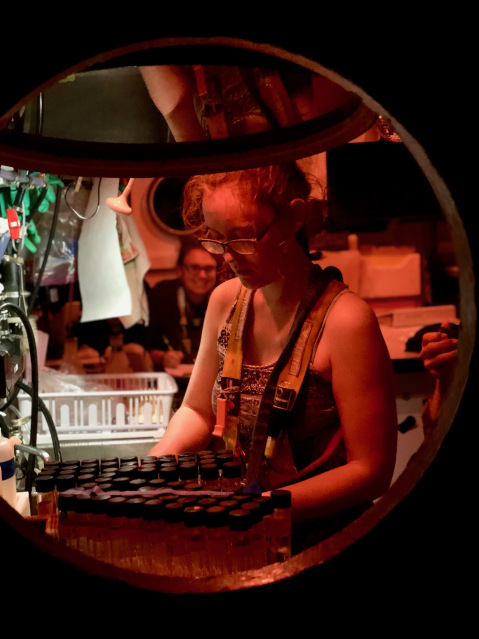 The Cramer is a tall ship research vessel owned and operated by SEA Semester, an educational program run out of Woods Hole, MA. Aboard the vessel, everyone was crew, from the newest, most seasick arrival on the boat to the wizened captain who had been sailing for decades. Being crew meant we all chipped in, manning the deck, putting up sails, and conducting science deployments and analysis. We all relied on each other to keep the ship safe and happy; it was easy to fall asleep because I knew that there was always someone on deck keeping tabs on the condition of the boat and the safety of the people on board. 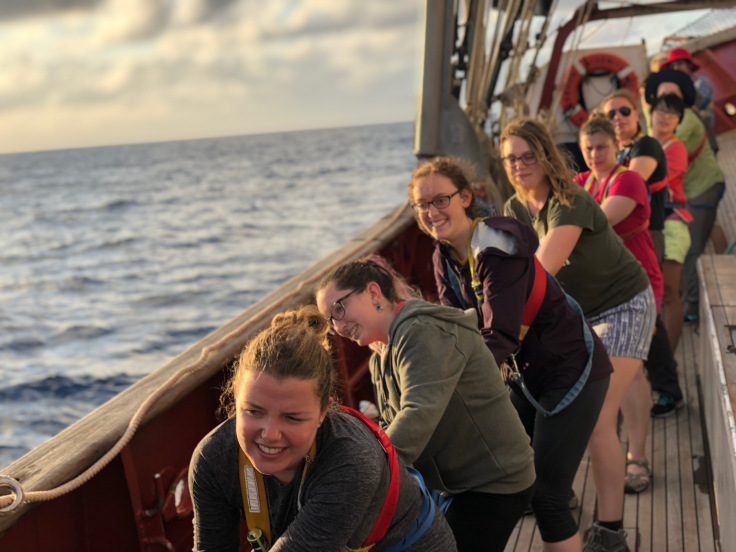 Conducting deployments and analyzing the collected water samples in the small laboratory space on the deck of the ship was a truly fascinating experience. We deployed a carousel of bottles and instruments down into the ocean off of the side of the boat a dozen times to collect water samples. A CTD (conductivity, temperature, and depth) device provided physical parameters of the ocean as it traveled down up to 1000 meters. As the carousel was hauled back up to the surface, individual Niskin bottles fired and closed at different times, capturing desired samples of water from different depths. These samples could then be tested for a variety of other parameters, including alkalinity and pH (both important for developing an understanding of ocean acidification) and phosphorus, chlorophyll A, and nitrate concentrations. Of course, out on the ocean, space and supplies are limited, but even though the lab was crowded, it was a very productive space for scientific research! 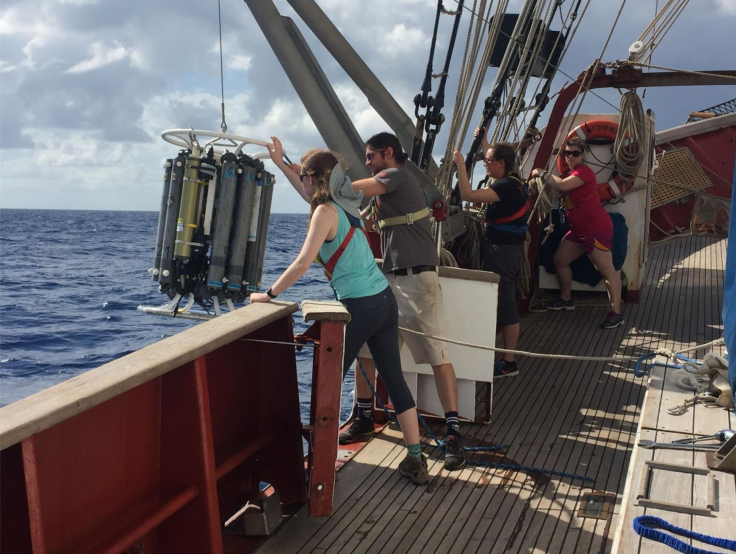 "Susan and Ed (one of the Cramer’s science crew) work with Michelle and Megan of C Watch to lower the CTD carousel device into the ocean. The CTD is comprised of 12 Niskin bottles which deploy at pre-programmed depths, collecting water samples for further analysis on the boat." - image courtesy: bablab@MIT

My favorite part of our time out on the ocean was being on deck. The science was certainly fun and was unlike any other scientific experience I have experienced before, but there was something about being at the helm and helping to raise and lower sails which made my time on the boat really special. Steering the boat was not nearly as difficult as I thought it would be. The only difficult part was the time delay between any action I made and the boat’s response. However, the room for error was much greater than that of driving a car; we definitely were not in any danger of hitting anything that we could not correct for.

I thought I would not like being on the 12-4 (both am and pm!) shift because it seemed a bit like the worst of all worlds with the bizarre sleep schedule and “extreme” temperature differences. However, I am grateful that I was on this shift – the stars at night were beautiful and awe-inspiring, and being on shift during lunchtime meant that I always got a chance to see everyone at least once each day. I do not remember the last time I was awake at 4 am before this trip, but I am glad that I now have these 4 am memories to cherish. That being said, I believe I can die happy if I never have to be awake that early ever again. 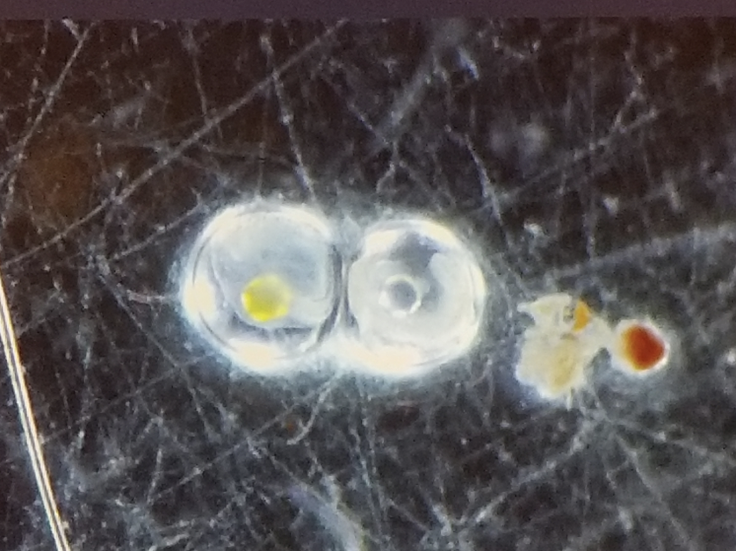 Overall, despite the seasickness, the landsickness, and the countless inexplicable bruises, this spring break trip was one I will always treasure. Although the trip did not convert me to becoming an oceanographer (the atmosphere still holds on to my heart), this trip caused me to develop so much respect for the sea and for the people who spend their lives trying to understand its deeply-held secrets. 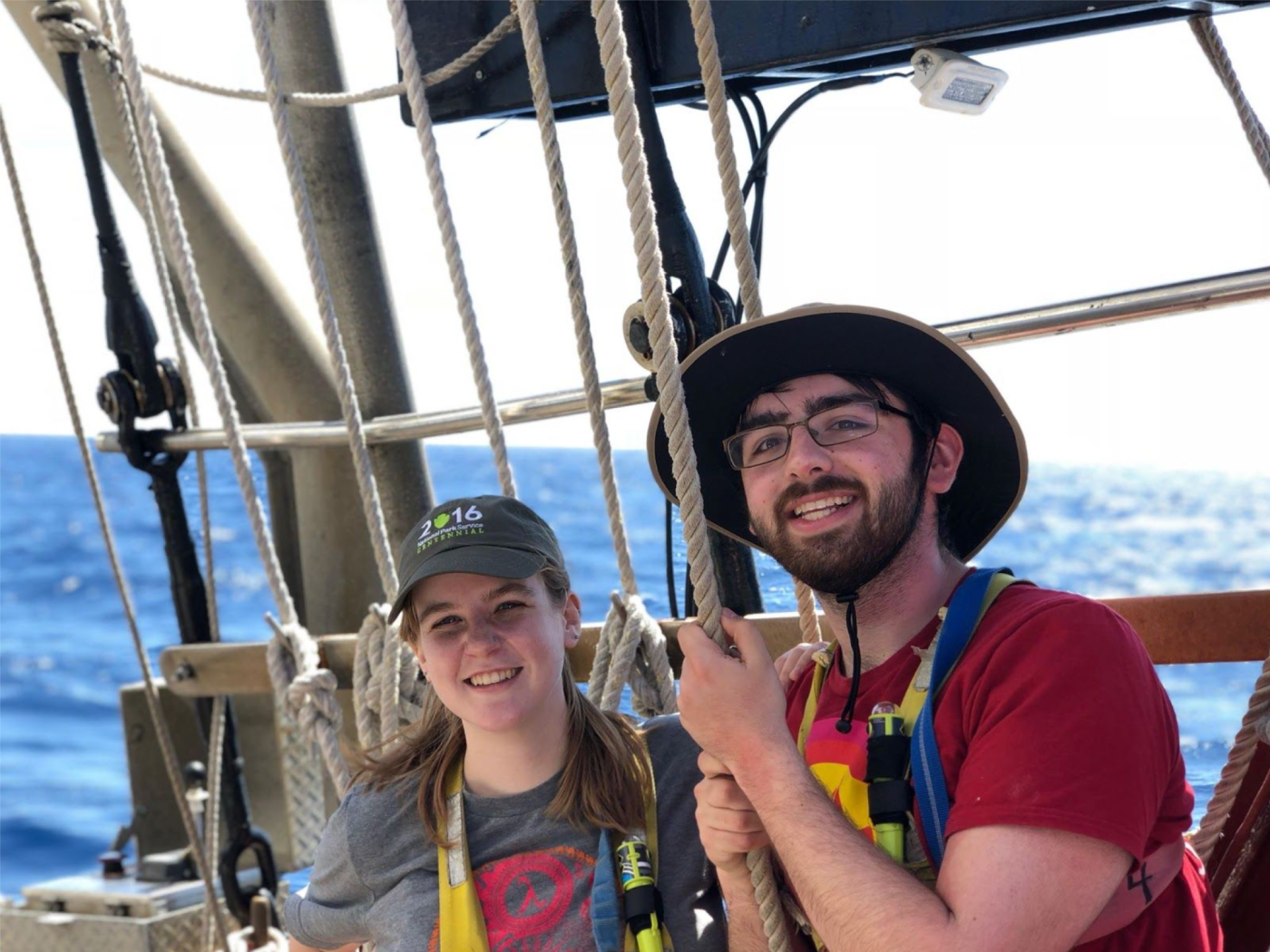 "A rare picture of me and Domenic not being mean to each other. Both of us were on A Watch, which meant we spent 12-4 am and pm every day manning the ship." - image courtesy: bablab@MIT

Story Image: "Everyone dangling out on the bowsprit netting: This is the life!" - image courtesy: bablab@MIT 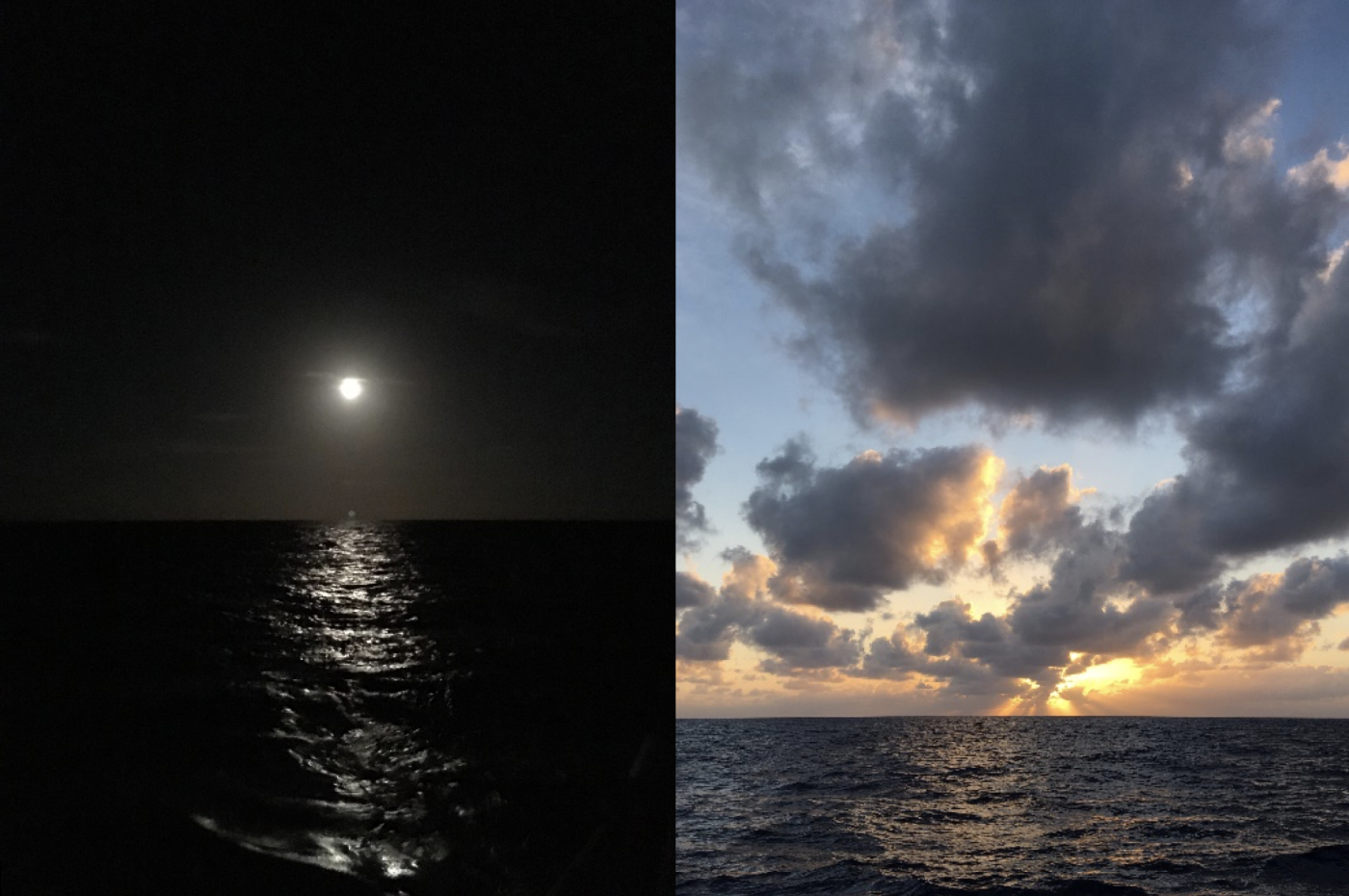 "I've noticed since returning to MIT that I pay more attention to the direction of the waves on the Charles while looking out from class in the Green Building, and the clouds above me as I bike to class in the morning. Now on dry land, I keep wishing I was back in that net on the bowsprit, singing along to a ukulele jam session on deck at dusk, examining tiny critters on the plankton TV, or deploying a carousel by moonlight. I am definitely going to have to find a way to get back to sea."  Elisa Boles '18 (EAPS)

"Being out in the middle of the ocean with only the waves and the wind for company seems like it could be a very lonely experience. However, my time aboard the SSV Corwith Cramer was anything but lonely. With 34 people living, working, and learning aboard the 130 foot vessel, it was actually hard to find time to be alone. The waves and the wind became our irreplaceable companions on the voyage, making our trip smooth and unforgettable." Lily Dove '18 (EAPS) 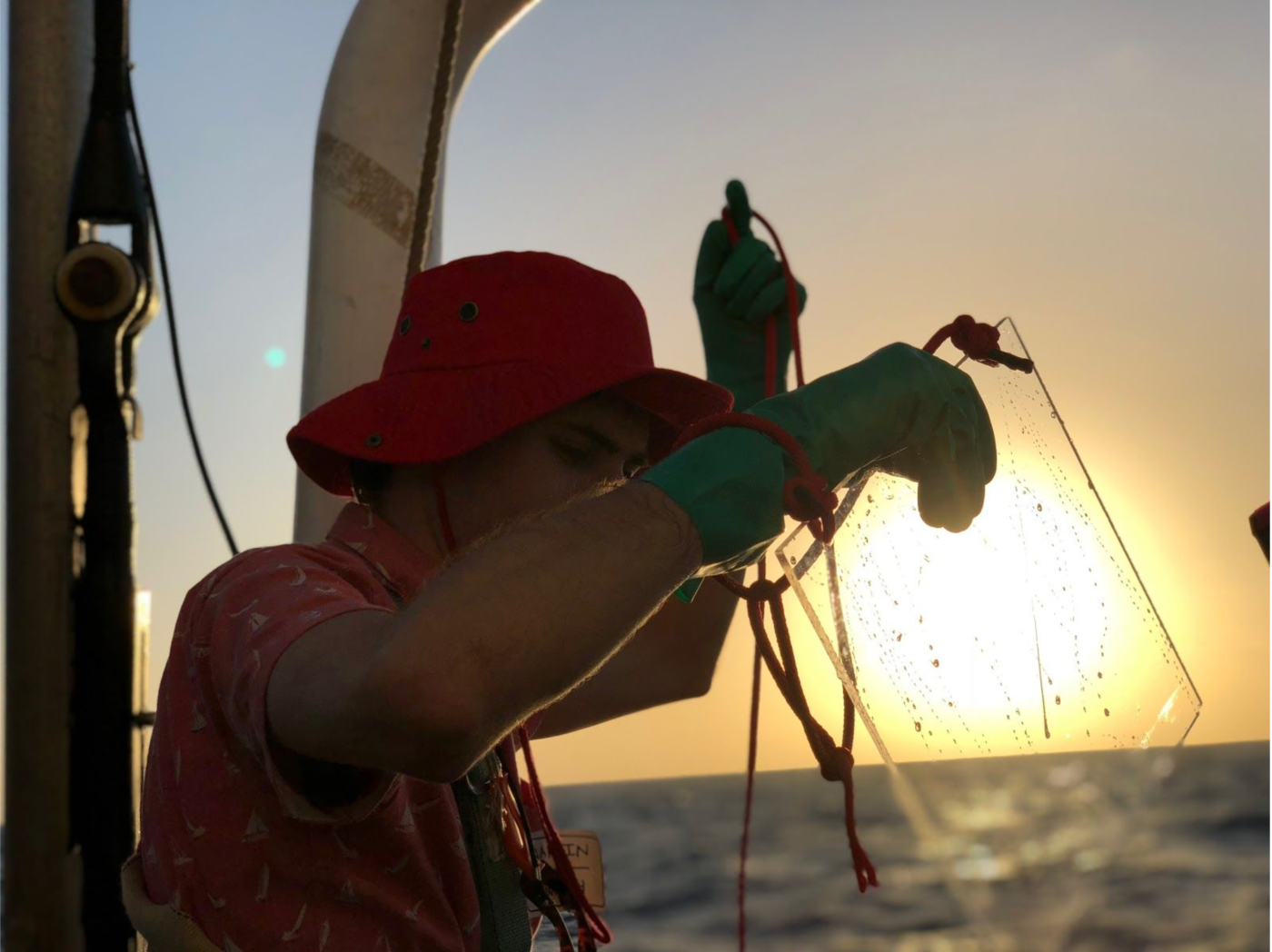 "I'll be honest, I was definitely more excited about how the carousel itself worked and how the hydrowinch worked than what we were actually doing with it, but that might just be par for the course for a mechanical engineer in an oceanography class." Michelle Kornberg '20 (MechE) 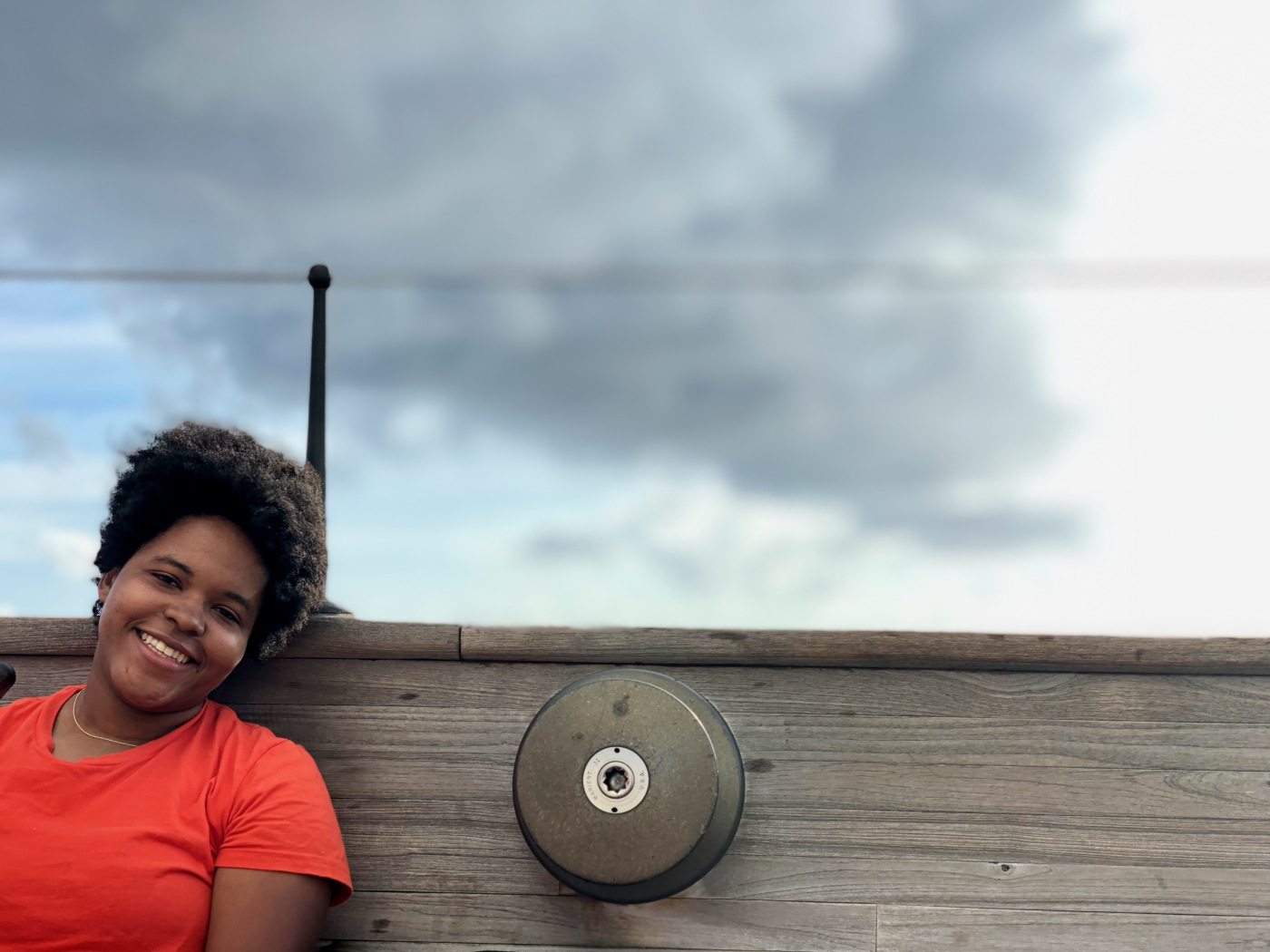 "[A crew member] asked me if I had thrown discus before so I would know how to throw the rope to the marina person so we could dock. She was really surprised when she found out that I had because every time she's asked this question, everyone said no. Anyway, I helped dock the ship and then we were able to climb up on the ropes and look out, before we left. I loved looking out over the marina today and I didn't want to leave." Brianna Love '19 (Wellesley) 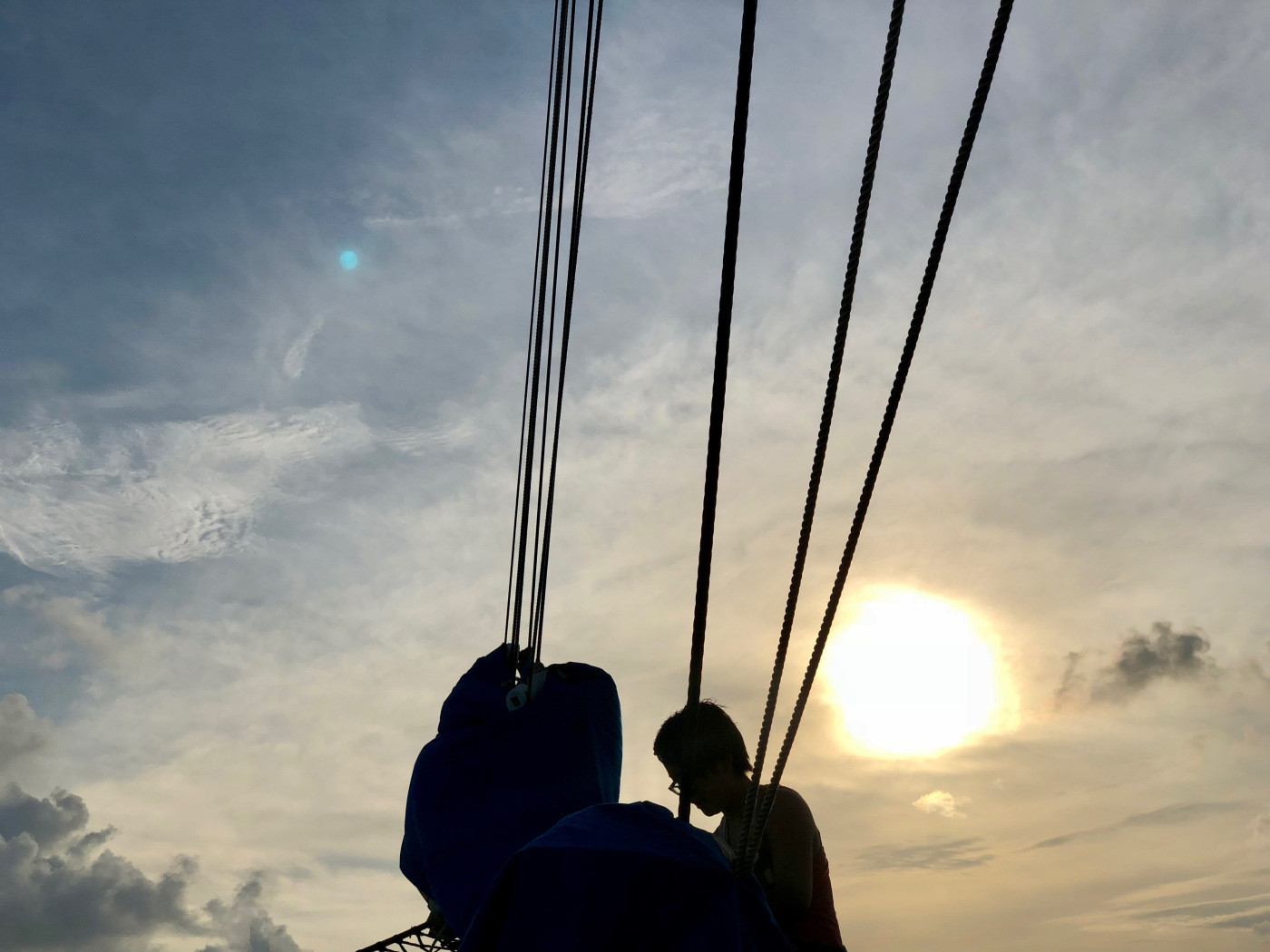 "Sleep in for the weak - the week after you get back!" Lei Ma, graduate student (CEE) 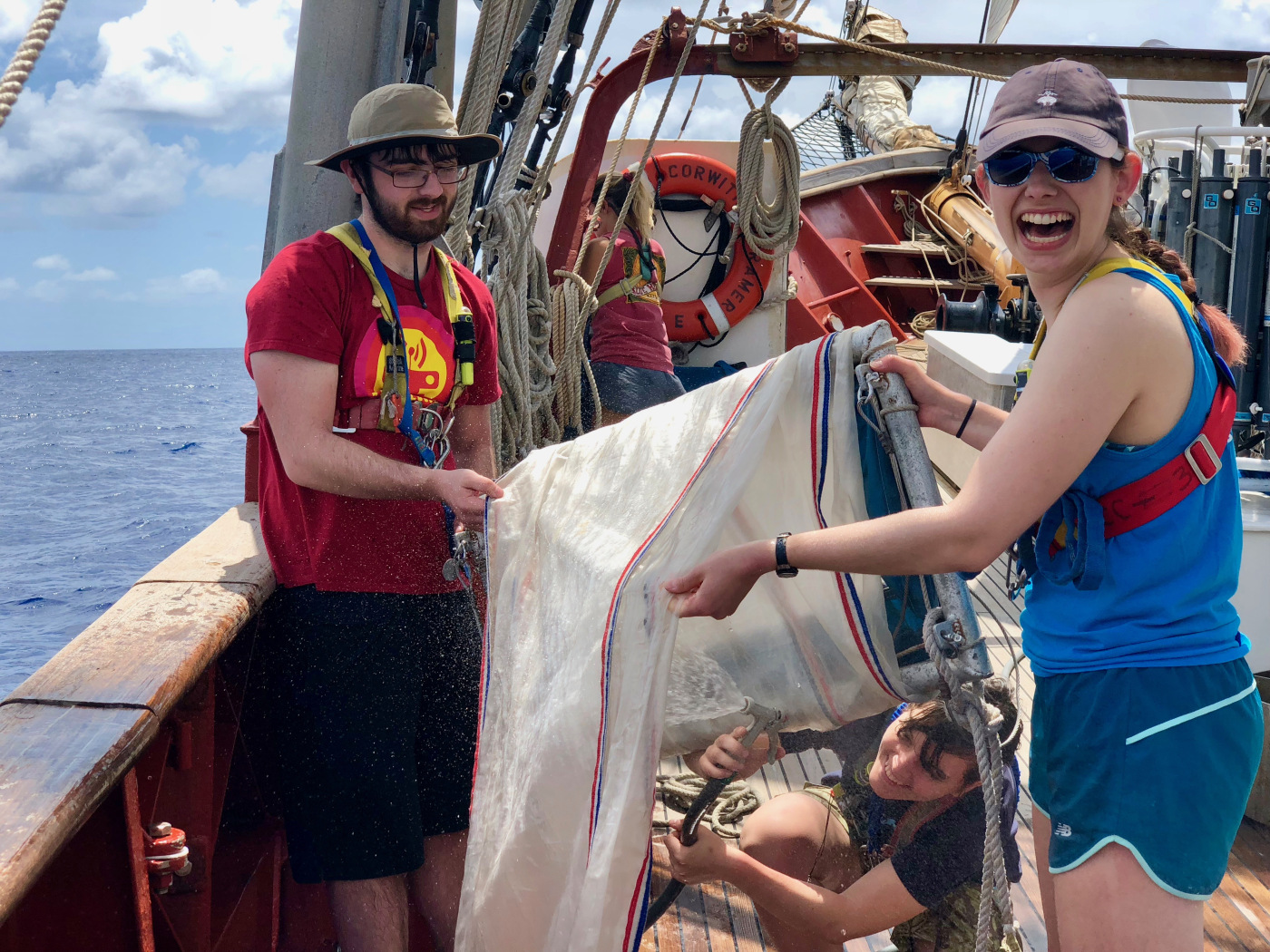 "The most important part of this experience for me was taking advantage of an opportunity I would never have thought to pursue in any other context, and it's made me consider spending more time on ocean sciences." Clio Macrakis '18 (CEE) 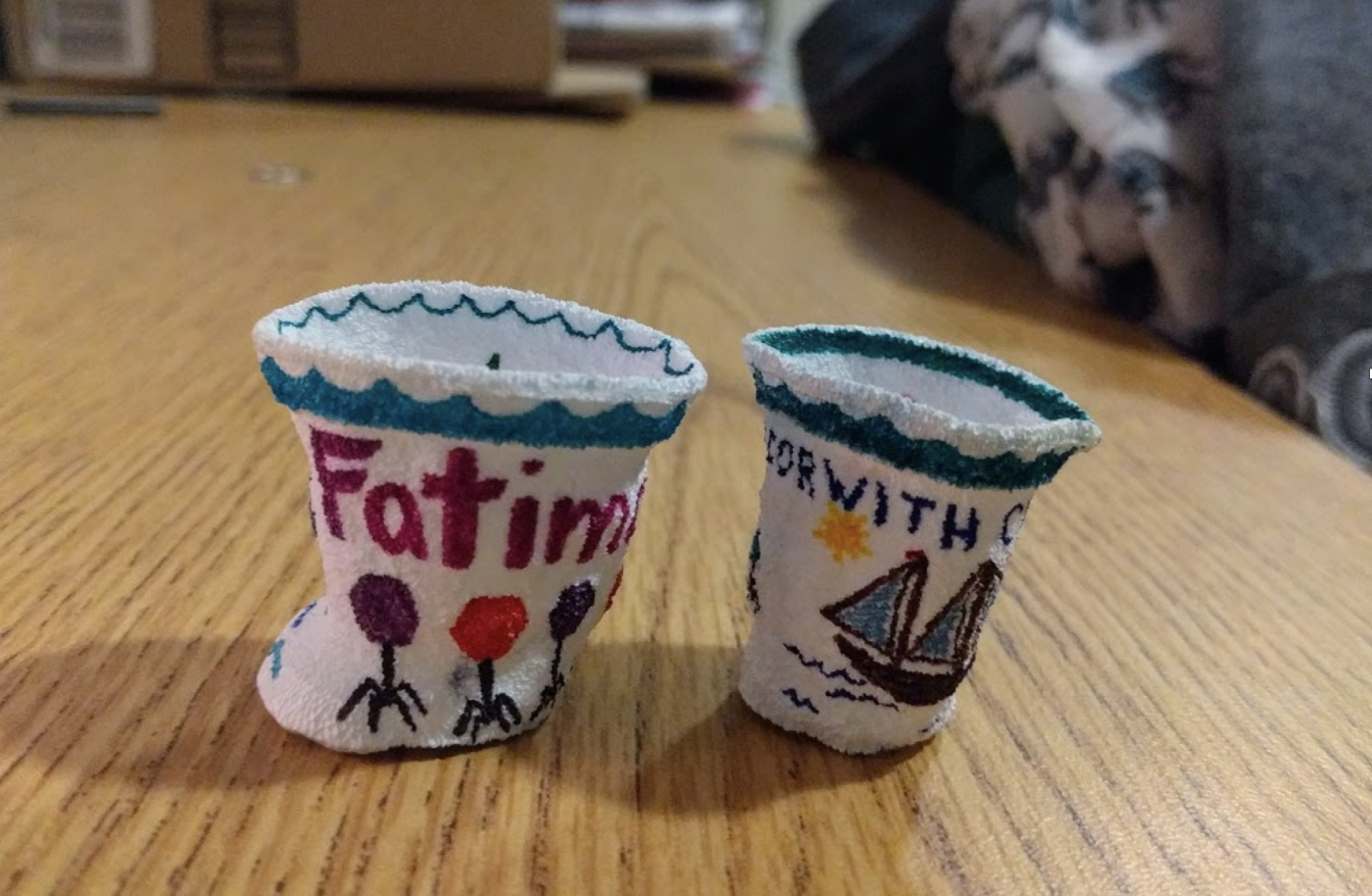 "While the actual science was pretty similar to the labs we completed earlier in the class at MIT, the labs at MIT don't rock around! Pipetting and carefully preparing samples for processing while the boat was in motion was definitely an interesting experience." Mikayla Murphy '18 (CEE) 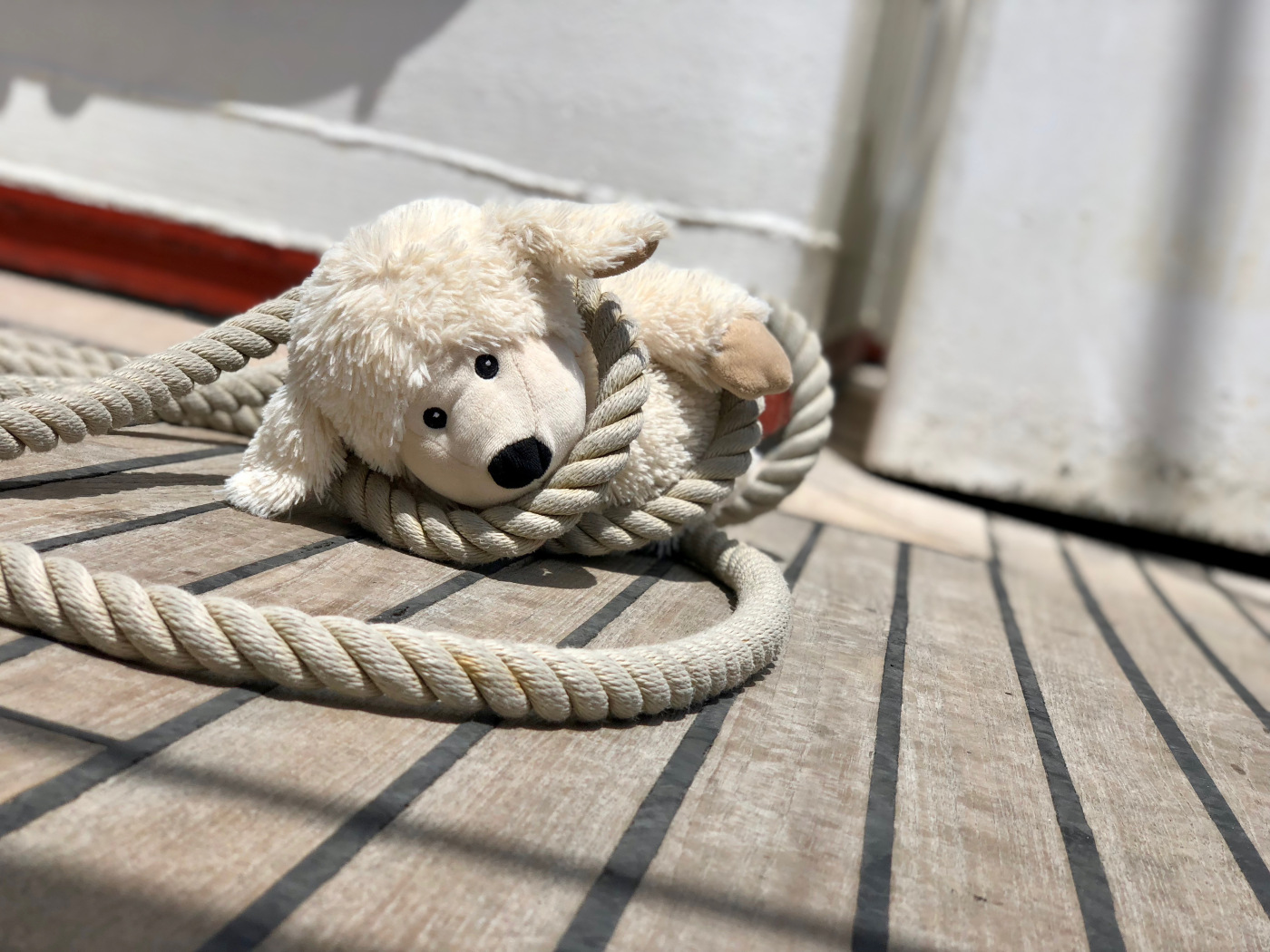 "I learned how to tie a bowline knot, check the engine, STEER THE SHIP, use a sextant to find the sun, essentially do a lot of sailing things that I had previously associated with Pirates of the Caribbean." Susan Mullen '18 (Biology) 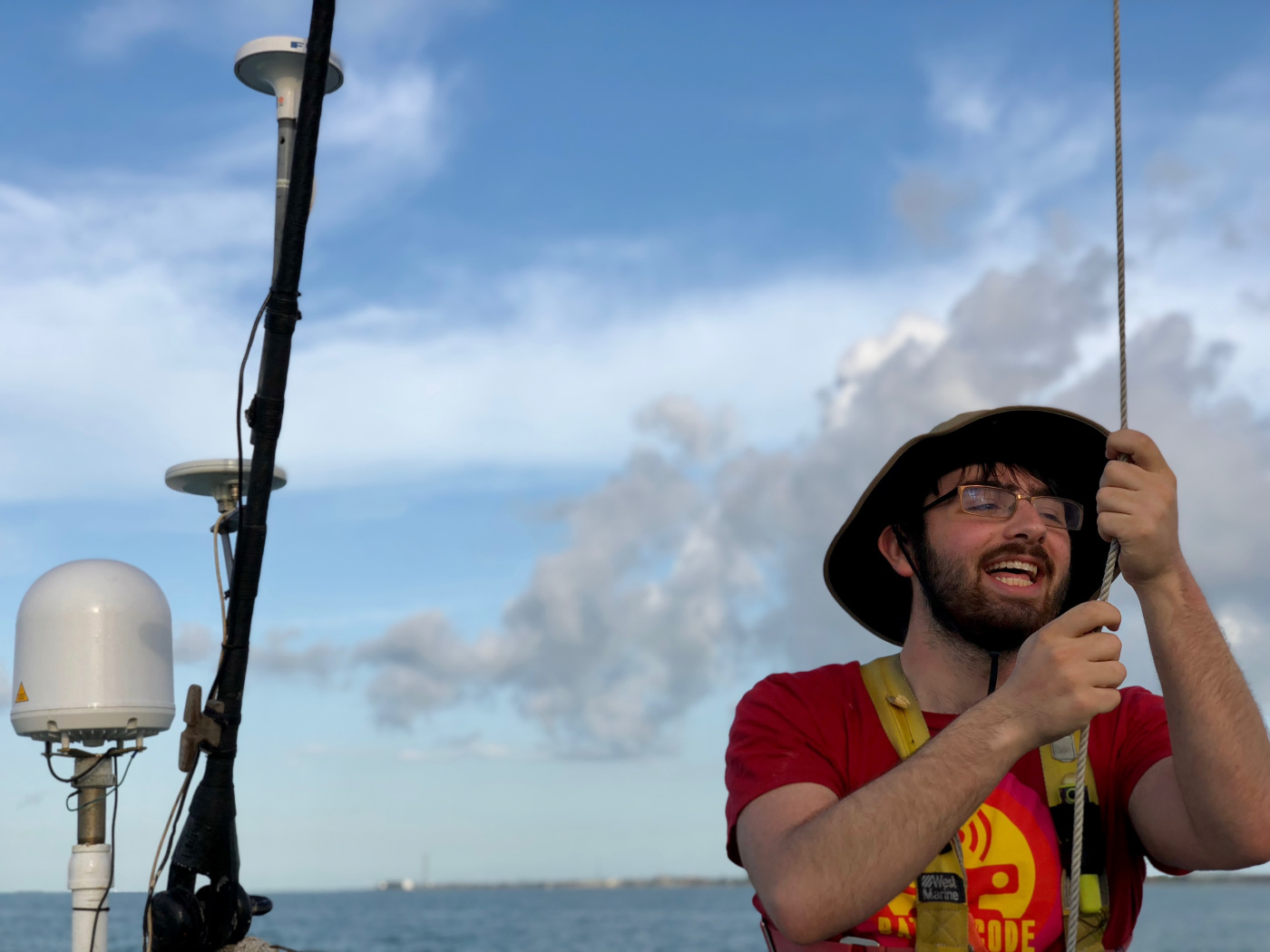 "I think the trip got a great deal more fun after the seasickness cleared!" and  "Among the beautiful blue water, the dolphin sitings, the sunsets, and getting to see the stars, there were a lot of cool things to see." Dominic Narducci '19 (Biological Engineering) 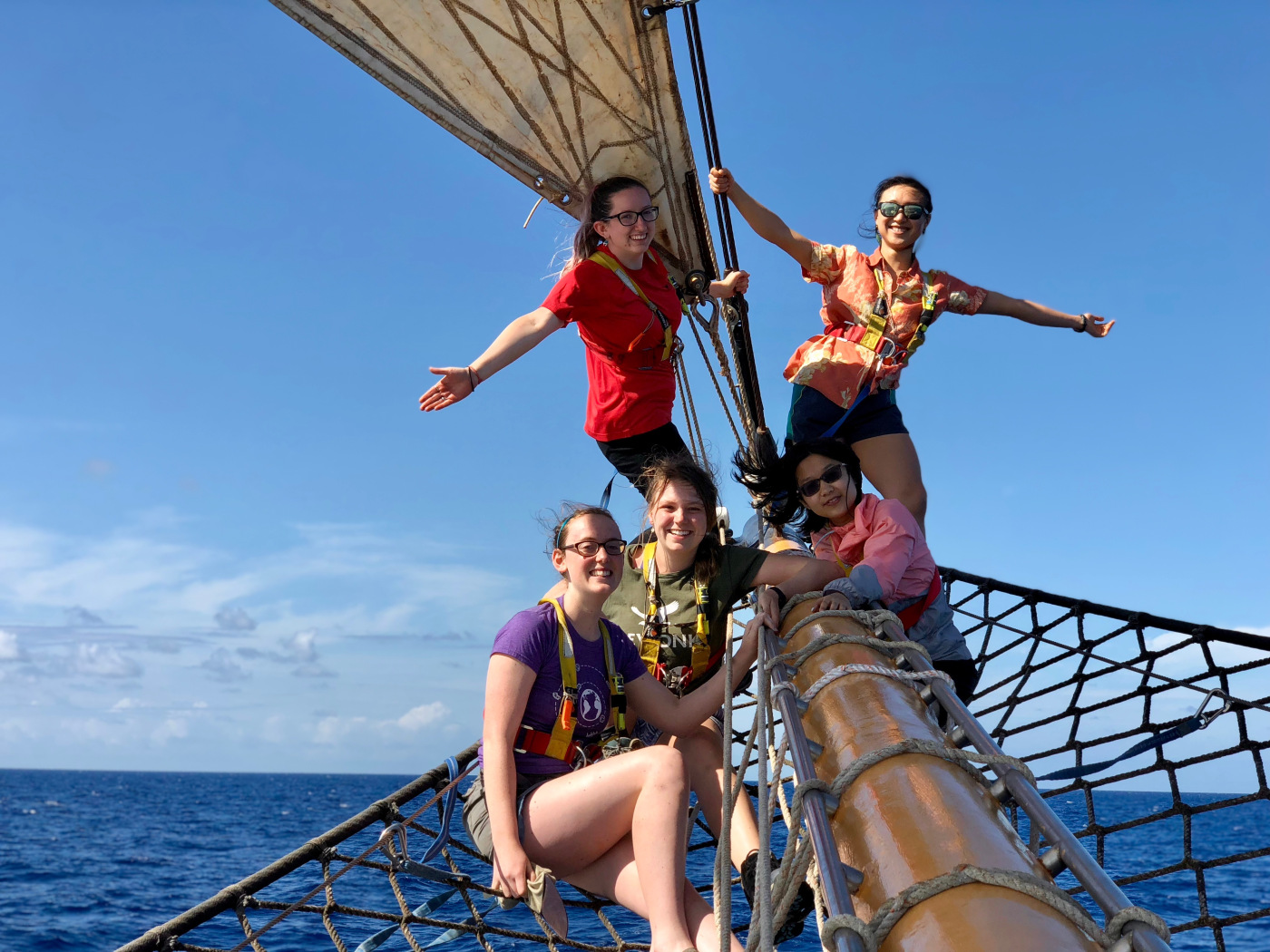 "It was a fabulous week that reminded me why I wanted to be a scientist in the first place." Emma Rutkowski '19 (EAPS) 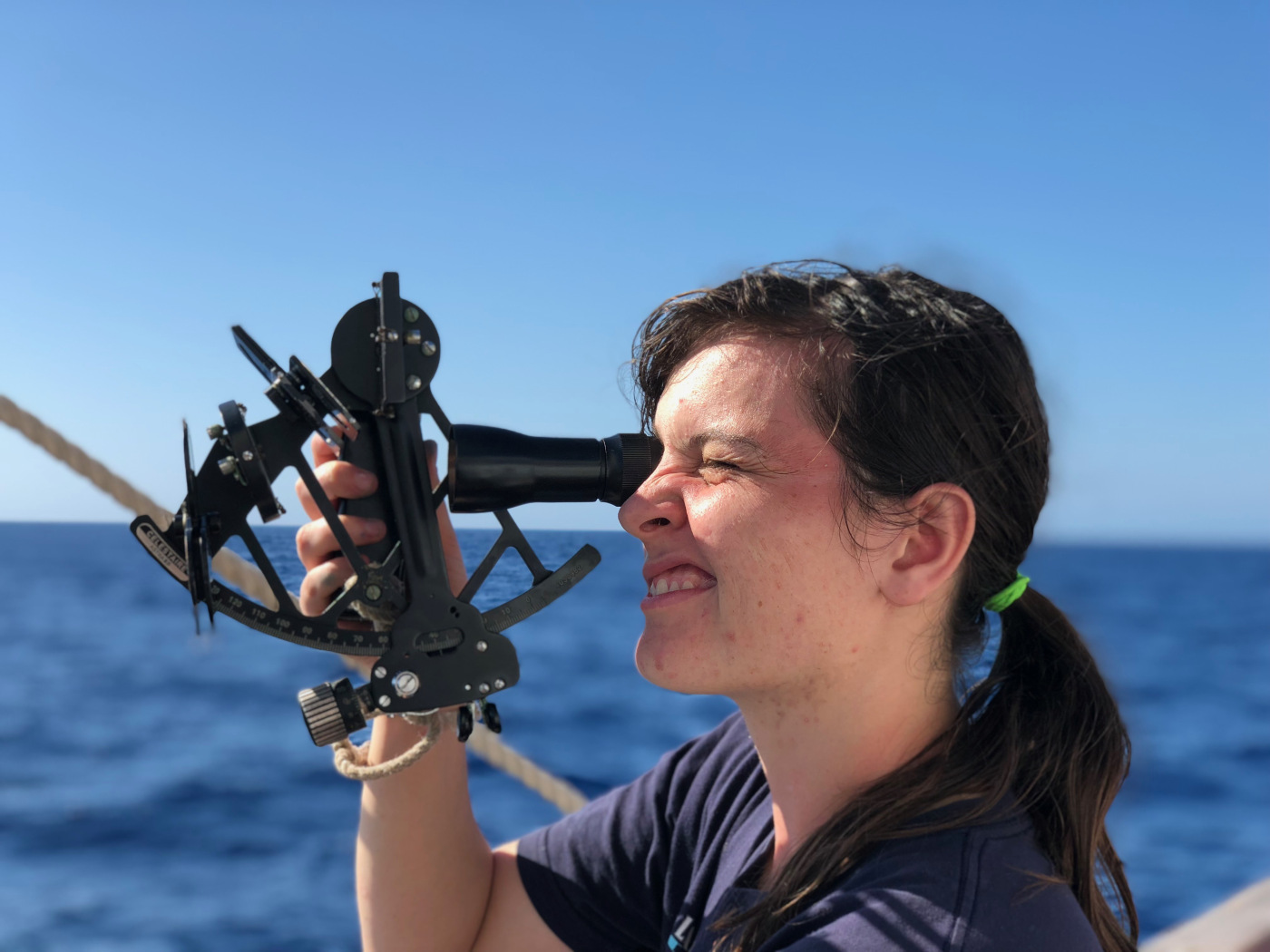 "Everybody keeps telling you that studying the ocean is important, but nobody really elucidates why. As an ocean engineer, this had been driving me crazy for years - I didn't know anything about the environment I wanted to build platforms for." Lauren TenCate '18 (MechE) 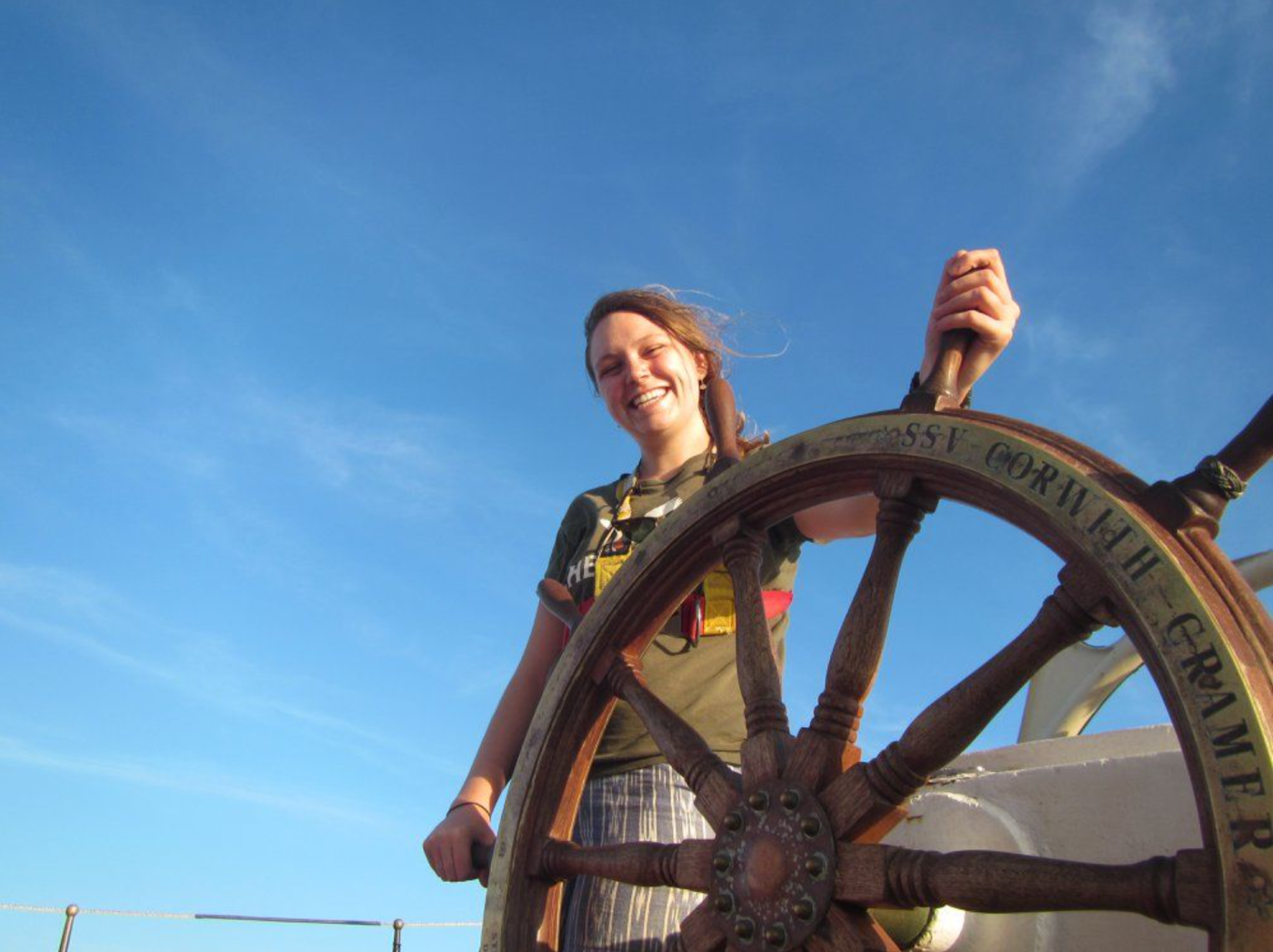 "One of my favorite parts of the trip was when we were sailing with all sails up, and it took the entire crew to jibe the boat. Every person was stationed at a line of a sail, some people would ease, some would haul, and some would guide the line along its rail [ ] we all had to be positioned correctly , and ready to go when the captain gave his orders." Lucy Wanzer '19 (Wellesley) 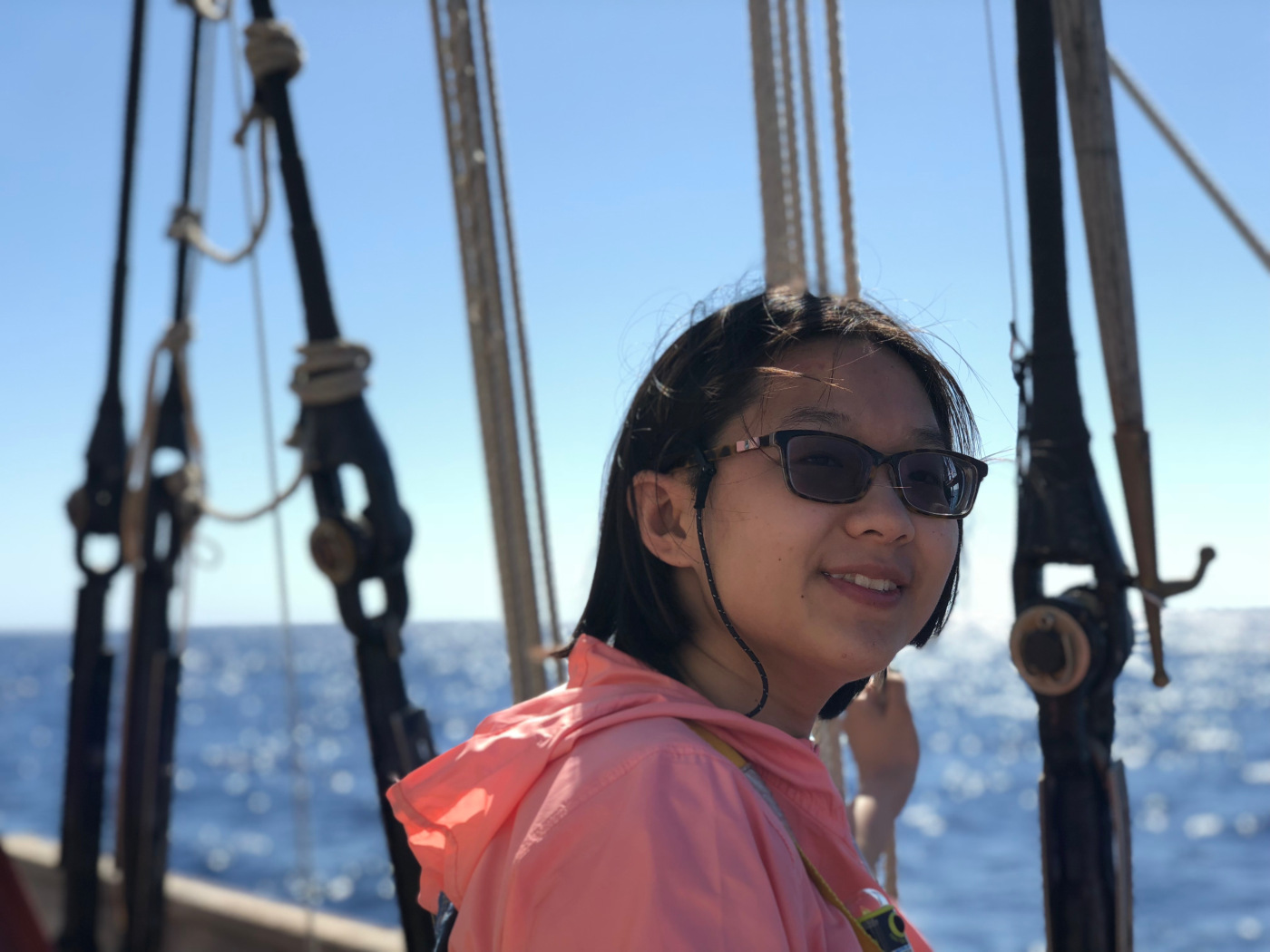 "Our watch was from 4AM to 8AM, and from 4PM to 8PM. We nicknamed ourselves "Best Watch", because we had a reasonable sleep schedule and got to see sunset and sunrise." Junyu Yang '19 (ChemE)