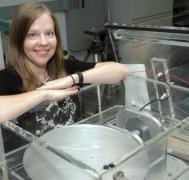 Big storms are getting bigger. Typhoon Jebi became the strongest tropical cyclone to hit Japan in 25 years and killed at least 10 people this past summer. Hurricane Florence awed even veteran meteorologists with its powerful combination of high winds and extreme moisture when it made landfall in North Carolina on Sept. 14.

Now, some MIT researchers say that the best way to study and understand these monster storms is to make the satellites that track them smaller.

A group of researchers from MIT’s Department of Aeronautics and Astronautics, led by PhD candidate Angela "Angie" Crews and Associate Professor Kerri Cahoy — who also has an appointment in the Department of Earth, Atmospheric and Planetary Sciences (EAPS) — in collaboration with Vince Leslie and William Blackwell at MIT Lincoln Laboratory, have published a new study comparing weather data collected by a CubeSat — a low-cost satellite about the size of a shoebox — with data from a traditional weather satellite.

“The bottom line is that this tiny satellite collected data that is as good as the data from a billion-dollar government satellite,” says Crews, the lead author of the paper, “Calibration and Validation of Small Satellite Passive Microwave Radiometers: MicroMAS-2A and TROPICS.” The research was presented at a conference of SPIE, the international society for optics and photonics.

CubeSats have a number of advantages over larger cousins like the NOAA-20 satellite, which weighs nearly 2,300 kilograms, while the diminutive MicroMAS-2A weighs less than 4 kg. NOAA-20 took eight years from the time the contract was awarded to when it was operational in space, while CubeSats can be built and deployed in a year or two.

“You can build them faster, which means you can put new technology on quicker instead of waiting 10 years for new technology infusion on a government program,” Cahoy says.

Big satellites also need their own dedicated launch vehicle, but CubeSats can stow away as secondary payloads whenever a launch vehicle has a little extra payload space.

CubeSats do have some drawbacks when compared with their larger kin, such as a shorter lifespan and the fact that they carry a more limited array of instruments. The MicroMAS-2 satellite, which measures temperature, water vapor, and cloud ice in the atmosphere, is basically a platform for a single 10-channel scanning microwave radiometer mounted in a rotating cube at one end of the satellite.

Yet the most important thing about weather CubeSats isn’t necessarily what they can do alone, it’s what multiple CubeSats can accomplish in concert. When oxygen and water vapor naturally emit signals in the microwave portion of the electromagnetic spectrum and those signals are measured at different heights by multiple satellites in a low-earth orbit constellation, they have the combined impact of the instruments on a larger satellite, and fed into weather models where the data are used for enhanced modeling and forecasting of hurricanes, tropical storms and thunderstorms, including 3-D reconstruction.

“A constellation of CubeSats lets you get data over the same spot multiple times on the same day, which is not possible with the standard government weather satellites right now, which maybe give you data over the same spot once a week,” Cahoy says. “If you’re tracking a tropical storm or a hurricane and you want to use data to update your forecasting models, that’s not as good as you would like it.”

That’s where MIT Lincoln Laboratory’s TROPICS (Time-Resolved Observations of Precipitation structure and storm Intensity with a Constellation of Smallsats) project comes in. TROPICS, led by Bill Blackwell, comprises a constellation of six CubeSats in three low-Earth orbital planes expected to be fully deployed sometime in 2020.

“TROPICS, in particular, is really aimed at looking at tropical cyclones, where the inner core conditions can change very rapidly,” says Crews. “So, if we have the constellation up there we can learn a lot more about tropical life cycles, and we can learn about factors that affect the intensity and just get a lot more data and really characterize these tropical cyclones better.”

Another advantage that bigger satellites have over the CubeSats is that they are easier to calibrate. But Crews, Cahoy and the MIT team found a novel way to improve calibration in the MicroMAS-2A. Because the MicroMAS-2A is carrying a radiometer spinning 30 times a minute, they found it was experiencing solar and lunar intrusions (times when the sun or the moon entered the scanning field and affected the satellite’s measurements) at a much higher rate. Where the NOAA-20 instrument would experience perhaps 44 intrusions over the course of a year, MicroMAS-2A would experience 5,700. So instead of discarding the data or correcting for it, they plan to use the intrusions as a calibration source because they are so frequent.

The researchers say they are just scratching the surface of what CubeSats can do, and that in the coming years they could have mean groundbreaking advancements in commerce, shipping, and military applications.

“CubeSats will continue to let us test new and better technologies — new chips, new electronics, new sensors  —  faster because we can get on orbit more quickly to see how they work, and do a better job of designing these instruments, cost everyone less money and get us more data,” Cahoy says.

Adds Crews: “It’s an exciting time to be in the field.”

Students’ project a contender for a hitchhike to the moon