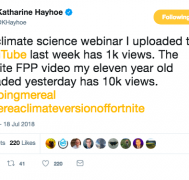 A new project by an EAPS graduate student combines gameplay with environmental education to increase action on climate change.

Read this story on MIT Climate.

Henri Drake is a graduate student in the Earth, Atmospheric, and Planetary Sciences (EAPS) department at MIT. Working with Professor Raffaele Ferrari, he is studying meridional overturning circulation in the ocean, and its impact on the global climate.

In addition to his academic interest in climate, Henri is also the founder of “Climate Fortnite”; a livestream of the popular video game Fortnite where he hosts climate scientists and experts. “Climate Fortnite” combines gameplay with environmental education. ClimateX sat down with Henri to discuss oceanography, and ways to make climate science more engaging to a wider audience. If you're interested in Climate Fortnite, check out their Twitch livestream!

Mikaela: Tell us a little bit about you and your background. How did you get involved in climate action?

Henri: My background is in pure math; I was a math major in undergrad. Going into my senior year, I was doing research in pure math, and it wasn’t very interesting to me. I didn’t know how to apply it to the world at large. So I decided to not take any math classes senior year. I took a bunch of random classes. One of those was global change biology, another was oceanography. And through both of those I discovered this field of climate modeling. I discovered that the best place in the climate sphere to apply my background in math is in fluid mechanics of the oceans and atmosphere, which is how I got into the research I do now - physical oceanography.

Mikaela: What are your current research interests?

Henri: I’m primarily exploring aspects of ocean water circulation but then I have some side projects that are more directly related to climate. One is studying is how the ocean in Antarctica brings up warm waters from the depths. That’s what we think is melting the Antarctic ice sheet from below. Before people thought that Antarctica would melt exclusively from above, from the atmosphere. But we’re starting to realize that the heat from the ocean is actually the big driver of melt.

The project that’s the most related to climate is assessing old climate models. Since the mid-60s, climate scientists have been making projections about what climate change might look like.  And it’s been about forty or fifty years since those projections were made. But people haven’t been looking back to assess how accurate they were. If they were wrong, why were they wrong? What can we learn from that?

Mikaela: What inspired you to start Climate Fortnite?

Henri: There was this Twitter feed started by Katharine Hayhoe. She posted a status saying her son had posted a Fortnite video, and overnight it received 10,000 views. Whereas she spent years working on a PBS series that also was on YouTube, but wasn’t getting nearly as many views. So she was expressing some frustration about that. People were replying in the comments saying, maybe this is an opportunity, and someone can combine these two things. There were people who didn’t know a lot about climate science but were interested in the game (Fortnite) who commented. There were also climate scientists who were 50-something years old, who didn’t know what the video game was, who were commenting.

And so, I was like, okay, I’m this 24-year old person who is also a climate scientist and who has played a lot of video games. Maybe this is my time to shine. I proposed starting the Climate Fortnite project and I got a really good response. Twenty people sent me messages saying they wanted to join. At first the idea was to talk about climate science while I was playing this video game. The way the game works is there is this big storm that’s enclosing in on an island. Inherently, there’s a little bit of relating the game to climate change.

It’s a pretty fast-paced video game, so it’s pretty challenging to talk and play at the same time. But over time we evolved. I realized that a pretty good way to do it is have a different guest and topic every week. On Tuesday night for example, we did a history of climate modeling and I had on a grad student from Boulder, Colorado. While we played the game, we would talk about the history of climate modeling. We stream it live on Twitch, which is a popular gaming website, and live viewers can comment in the chat and ask questions.

Interspersed with gameplay, we would answer questions about the science. Now that we’ve streamlined the process of the actual audio and visual recording of the stream, and blending the interview with the game and the questions, it flows pretty smoothly now.

Mikaela: Do you have a sense of the audience viewing the Climate Fortnite streams?

Henri: For Twitch, it’s a 2-way interaction, so I have a good intuition. We have four regulars on the stream, and dozens of other people who come in and out. The regulars seem to be people around my age, maybe a little older, who have some science background from undergrad. They also include other kinds of scientists. They are really interested in learning about climate specifically, but don’t have the tools they need to engage with the literature directly. I also just play Fortnite with random people, so I have talked to kids. There’s a couple fifth graders I had on, and some 8th graders. I’m trying to engage a younger audience with some of the climate change work I’m doing.

Mikaela: How can you inspire and empower people to take climate action?

Henri: I’m trying to steer the project more towards games that have more to do directly with climate change. There is this trend that’s taking over the whole world of “game-ifying” things that are important. One of these things is learning about climate change, and internalizing these key behaviors that we want people to learn. Thing like being mindful of various emissions that come from activities, or just generally having an appreciation for how unhealthy these things are for the environment. So that’s the gaming side of the answer.

Personally, I’m also really into visualizations for a tool for inspiring and engaging people. You can take some really complicated science, and just distil it. What I really like are 3D movies. Moving images that give a straightforward answer to the viewers, that can be a really powerful tool. Something like “warming stripes”; so a bunch of stripes for each year the average temperature for a location. You can see it goes from blue for cold, to red for warm, and those striking visual representations can leave an impact.

Mikaela: What direction do you see the Climate Fortnite project taking in the future?

Henri: The name of the project is still “Climate Fortnite”, but I’m trying to transition to this game called “Eco”. Eco is basically a “game-ified” climate model. You start off on this planet, and you have to build your civilization. But every choice you make impacts the environment. If you start some industry, you have waste products that comes with that industry. This is the big key difference with other games. In Minecraft for example, you can build cities, but there really isn’t any negative impact on anything. In Eco, you have to balance your costs and benefits.

This game internalizes physics into this model. When you drive around, you’re omitting CO2 into the atmosphere. That raises the temperature of the planet, and it causes sea level to rise, it changes forest populations. I’m trying to move towards that game, because it’s so much more directly related to climate change. Also, it’s slower paced than Fortnite so it’s easier to have a more reasonable, coherent conversation. But I think for the time being I’ll just be doing both – steam Fortnite one night, and stream Eco another night. I think it’s sort of a natural thing as a climate scientist -- you read all these papers, you go to these talks, and people are showing the negative impacts of climate change. If we don’t change, it will be bad for the planet, people, and animals. I feel like it’s natural for someone extraverted like me to communicate that to other people, which is the aim of the Climate Fortnite project.

A longer discussion with Henri Drake can be heard on CBC radio.