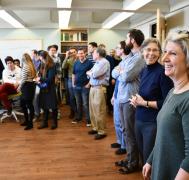 Originally written for the EAPS Program in Atmospheres, Oceans and Climate (PAOC).

Late MIT Professor Jule Charney is remembered as a man who brought people together through a combination of wisdom, optimism, and charm. Now, the Green Building, where his groundbreaking work on modern dynamical meteorology took place, has a dedicated space worthy of such a reputation.

On December 5, 2018, MIT Department of Earth, Atmospheric and Planetary Sciences (EAPS) faculty and students unveiled a recently renovated Charney Library, located on the 14th floor of the Green Building, right across the hall from the famed professor’s former office.

The student-initiated renovation project, made possible by generous alumni donations, transformed the library from a dark, cramped space into a bright, modern multi-purpose common space where members EAPS can interact both socially and academically.

The impetus for the restoration project came from a flux of alumni donations following the February 2018 centenary celebration of MIT meteorologists Jule Charney and Ed Lorenz. The two-day symposium, named MIT on Chaos and Climate, brought together the current EAPS community and welcomed back alumni and former faculty in celebration of the lives and legacies of the two prominent MIT professors.

“When this project was first proposed about a year ago, it aligned beautifully with some of the things that I personally really want for the department, which is to create more space—higher quality space—for students,” said van der Hilst. “And this is really the first step in doing that.”

From securing funding to completion of construction, the renovation was nearly a year in the making. A wall was knocked down to increase square footage and add much-needed light from an additional window. Sleek hardwood floors were laid, and brand-new bookshelves and whiteboards were hung. Flexible furniture configurations were also added, including two couches bordering each window, a high-top table with rolling bar chairs, and a long conference room table. The new seating options and open layout make for a space that is more amenable to community interactions.

“The purpose of this place is for everyone to feel like they have a place to interact with colleagues, meet with speakers, host community events, or have small group meetings,” said EAPS Associate Professor Paul O'Gorman, who led the Charney Library Project committee. “The door is always open.”

Shivamoggi, a second-year graduate student, spearheaded the renovation project after hearing feedback about the lack of meeting spaces for students at the 2017 Program in Atmospheres, Oceans and Climate (PAOC) retreat. Shortly after, she wrote a proposal for funding and recruited fellow graduate student Palermo to help design a space best suited to the needs of students and faculty.

“I’m really glad that the new room has so much space and so much seating,” said Shivamoggi. “I’m hoping it will bring more groups of students together and help bring students from different floors together.”

The renovation is not completely finished yet (a video projector will soon be added above the conference table), but already attendees were touting their favorite parts of the new library.

“My personal favorite part is that there’s now a water line,” said O'Gorman. “So, no more hauling water from the trucks.”

“I think my favorite part is just how bright and welcoming it is,” said Palermo.

The renovations also went beyond just cosmetic upgrades. The new space includes a new selection of contemporary textbooks—particularly important for MIT-WHOI Joint Program students who commute between Woods Hole and Cambridge and lack office space in the Green Building. This effort took the expertise of MIT science librarian Christine Sherratt, who helped to sort through old books, many of which belonged to Professor Charney, and donate journals that are now available online.

This is not the first transformation the space has undergone. At the event, Carl Wunsch, Professor Emeritus of Physical Oceanography in EAPS and PAOC member, described how Professor Charney used the area as his personal library during his tenure at MIT from 1956 until his death in 1981. The space was dedicated as an EAPS library in 1983 in honor of Professor Charney, but after decades of use was in dire need of refurbishment.

“But it’s very useful for people for people to know that this really was the scientific home for the Atmospheric and Ocean Dynamics Project,” said Wunsch.

Following the unveiling, EAPS faculty and students celebrated with pizza, provided by the Houghton Fund.

Afterwards, students wasted no time putting the new space to good use. Before the pizza was finished, students were already huddled around a laptop at the high-top table, working on a research paper. A whiteboard behind them displayed big, colorful block letters, thanking alumni for the much-appreciated new meeting space.

The Charney Library renovation was made possible thanks to the following alumni for their kind support, with special gratitude to Dr. J. Shukla and Dr. Rick Babcock for matching donations to the Charney Library Project:

The Charney Library is open to the EAPS community. Students or faculty may contact Darius Collazo if they would like to use it for a community event.

A Celebration of Two Pioneers of Modern Meteorology (event coverage)