For New Englanders, the storms this past winter seemed relentless. The several nor’easters caused blizzard conditions in the greater Boston area, and two such “bomb cyclones” brought with them record storm surges, flooding parts of downtown Boston and the surrounding communities.

Oceans@MIT spoke with faculty members of MIT’s Department of Earth, Atmospheric and Planetary Sciences (EAPS)—senior lecturer and meteorologist Lodovica Illari, professor of oceanography Glenn Flierl and professor of climate science Paul O’Gorman from the Program in Atmospheres, Oceans and Climate (PAOC), as well as the EAPS Cecil and Ida Green Professor of Earth Sciences Brad Hager—about why we saw this extreme flooding and what we can expect in the way of Boston storm surge during winters to come.

The first wave of high water came on January 4th during storm “Grayson” and the second hit during “Riley” on March 2nd. Sea level reconstructions confirmed that these were some of the worst storms the area has seen. Documents found at MIT and Harvard describing NOAA tide-gauge measurements near the USS Constitution’s dry dock in Charlestown, combined with astronomical data, indicated that these nor’easters caused some of the highest sea levels Boston has experienced since 1825. Additionally, these records, which are some of the oldest chronicles of Boston Harbor tides, show that the temporal closeness of these storms was rare.

Without adjusting for various factors, the water levels resulting from these storms ranked first- and third-highest; when taking into account sea level rise and land subsidence, the tidal storms still tipped the scales, placing fourth and eighth, respectively.

Flierl and Illari say that these floods resulted from astronomical high tides on top of storm surge and sea level rise.

A supermoon on January 1st played a large role in Boston’s flooding on January 4th. A supermoon occurs when a full moon appears closest to the Earth in its elliptical path, called its perigee. Since the full moon’s gravitational pull elevates tides higher than normal, the moon’s proximity to Earth intensified this effect. Additionally, January’s perigee happened to be the closest of 2018, making the moon’s pull particularly strong. On top of that, rapid intensification of the storm about 100 miles off of Nantucket and hurricane-force winds blew water towards the shore.

The result? Normal tides in Boston are between 9 and 10 feet, but this storm brought a little something extra. The city saw the highest water level at 15.16 feet, with storm surge topping 4.88 feet mean higher high water (MHHW). The nor’easter also dropped more than a foot of snow in the Boston area.

The March 2nd storm, Riley, walloped the coast with winds and rain, so much that the National Weather Service Boston declared it a “… LIFE & DEATH situation for those living along the coast, esp. those ocean-exposed shorelines.” Like Grayson, it also coincided with an astronomical high tide, after a full moon on March 1st, producing the third-highest observed water level on record. The noontime high tide reached 14.67 feet Friday, and the high tide just before midnight crested close to the record of 15.1 feet set during the Blizzard of ’78; the storm surge that contributed to this reached 4.4 feet above MHHW. 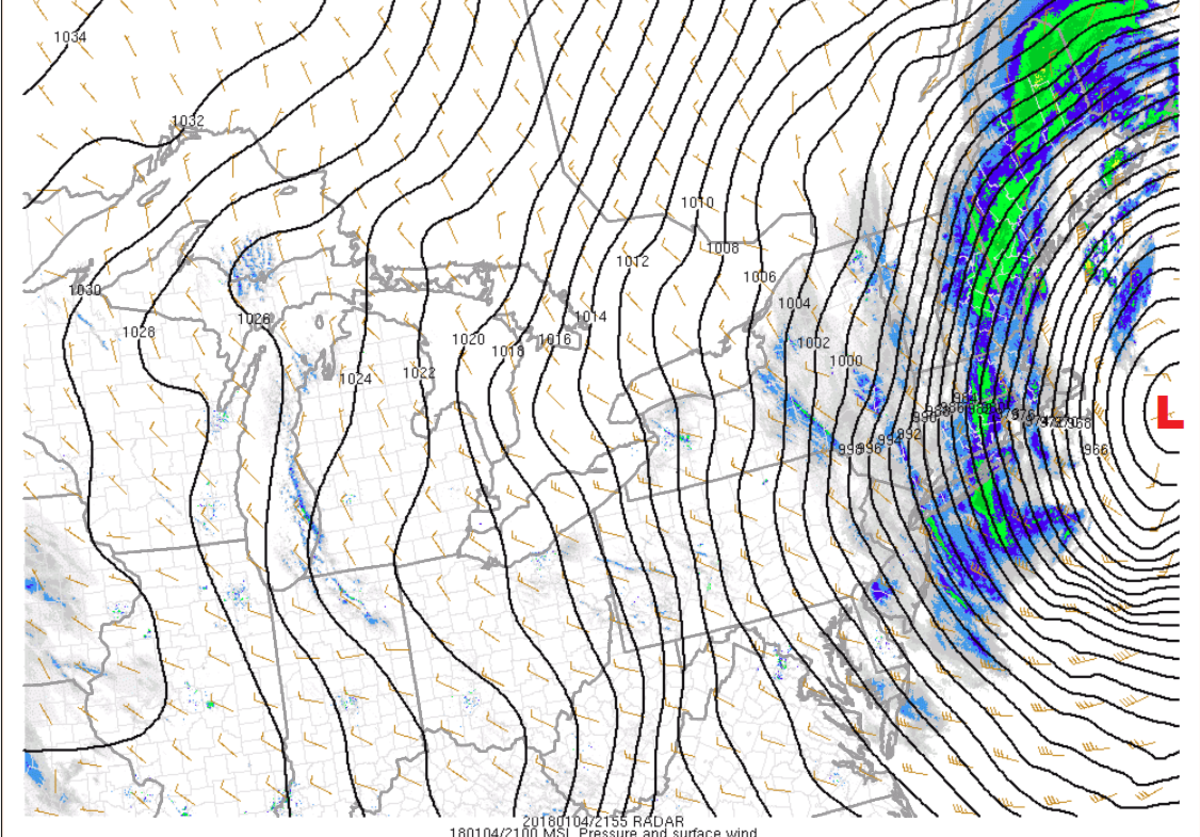 The picture from the atmosphere

While these storms may seem unusual, meteorologists like Illari feel that they are not out of the ordinary; blizzards and nor’easters caused by “bomb cyclogenesis” commonly impact New England in the winter. However, meteorologists and researchers feel the strength and frequency of this past season’s weather has been newsworthy.

Nor’easters form when warm air over the ocean converges with cold air over land. The larger temperature gradient during the winter makes this effect more pronounced. Warm northwest Atlantic waters and a distorted La-Nina jet stream, allowing Arctic air further south, could have combined forces to fuel Grayson and Riley. These storms also underwent a process known as “bomb cyclogenesis” or “bombogenesis,” which often causes more severe storms. This is the result of atmospheric interaction of a strong upper level cyclone, due to a dip in the anomalously cold tropopause, with a surface cyclone, caused by an unusually warm surface. The superimposition of the two cyclones causes the surface pressure to fall rapidly.

The January 2nd storm, Grayson, broke records as the strongest intensification of a mid-latitude cyclone in four decades in the western Atlantic Ocean. The storm’s central pressure dropped 59 millibars over a 24-hour period. This was more than double the requirement to be classified as undergoing bomb cyclogenesis, which is defined as a drop in pressure of 24 millibars over 24 hours. The pressure differential caused high winds along Boston’s coast and offshore, reaching 76 mph in Nantucket, MA. Illari says, “This type of [atmospheric] interaction [between the upper and lower cyclones] can happen several times a year, but in the case of Grayson it was enhanced by an existing very cold troposphere due to a cold air outbreak over the second half of December, favoring heavy snowfall."

Since the jet stream was not blocked, the storm didn’t linger and continuously push water toward the coast, but instead moved quickly towards Canada’s Maritime Provinces.

Unlike Grayson, Riley was longer in the making and the leaving. The ingredients for Riley began coming together in late January. Thunderstorms in the tropical west Pacific Ocean were likely connected to a record strong phase of the Madden-Julian Oscillation (MJO), which NOAA describes as “a major fluctuation in tropical circulation and rainfall that moves eastward along the equator and circles the entire globe in a span of 30–60 days on average.” The reverberations of this may have influenced an anomaly in the stratosphere polar vortex over the Arctic. Then, westerly winds in the troposphere at the edge of the polar vortex, called the jet stream, weakened and split. This event allowed cold air normally trapped in the Arctic to spill out and be replaced with warmer air, an event termed sudden stratospheric warming (SSW). This is not an infrequent event, but this pattern was deeper and longer than normal.

Downstream, weather patterns off the US east coast changed. The cold air helped to form an area of high pressure over the Atlantic and southerly winds allowed warm air northward. Moving over Greenland, this stationary high-pressure system obstructed the jet stream and trapped the storm Riley off New England. This blocking high also brought warm air northwards into the Arctic.

As Riley moved up the US Atlantic coastline, it rapidly intensified, dropping 30 millibars in 24 hours. The pressure difference inside the storm verses the surrounding areas powered the winds, which reached 93 mph in Barnstable, Massachusetts. Since the storm was nearly stationary, it piled water up on the New England shoreline, causing flooding over multiple tide cycles. Slow moving storms like Riley have been found to cause some of the largest winter storm surges on record.

The odds of getting two storms with the magnitudes of Riley and Grayson in the same year are about several thousand to one, assuming that the climate is not changing.

What does the future hold for flooding during Boston nor’easters?

In addition to the storm surge, the seas around Boston have been steadily rising while the land has subsided. According to NOAA, the area has experienced about a foot of sea-level rise since the 1920s, and a Scientific Reports study estimates that sea levels on the eastern US will rise about three millimeters a year. The rate will likely accelerate from there, rather than remaining flat.

Also, the land on which the city of Boston resides is sinking, and Brad Hager says, “The effects of deglaciation on the uplift/subsidence in the Boston area is complicated. The weight of the large ice sheet to the north of Boston resulted in sinking of the surface there, which pushed mantle material out to the side, creating a ‘peripheral bulge’ under Boston.” Over the past 10,000 years, that bulge has been sinking and the rate at which this is happening is decreasing. During this time, Boston has dropped about 35 meters, Hager says; now, it’s subsiding at about 1 millimeter per year (4 inches per century).

Accounting for sinking land, estimates predict that relative sea levels could rise in Boston about 1.5 feet (19 inches) over 1992 levels by 2050 and 30 percent of city land could be submerged by the end of the century. Furthermore, a weakening Gulf Stream and its associated sea level rise is expected to disproportionally affect the northeastern US.

Additionally, today’s extreme floods will be tomorrow’s astronomical high tides. According to a February report from NOAA’s National Ocean Service, tidal flooding that currently affects the US Atlantic shore on 3 to 6 days per year could hit as often as 80 to 180 days a year by the 2040s due to global sea level rise. While high tide flooding—which happens at predictable points in the tidal cycle—and extreme storm surge are not the same, they can overlap and worsen a storm’s effects. High tide flooding could be exacerbated by a high-pressure system offshore, which could push water toward the coast. This is called “sunny day flooding.” Regional factors in New England like subsidence and the knock-on effects of a weakening Gulf Stream will increase sea level at a faster pace than the global average, making Boston particularly vulnerable. Nor’easters will then play out on top of this scene.

The frequency and severity of storms and storm surge in New England will also likely experience an uptick in the coming years due to climate change. The 2017 National Climate Assessment observed that there has been an increase in both the number and strength of storms during colder months since 1950 for the entire northern hemisphere and the number of extremely heavy snowstorms has increased in the last century in northern and eastern US. Storm tracks have also shifted poleward, bringing more storms into the New England region. Other works suggest that extratropical cyclones like nor’easters may be causing some of the largest storm surges in the US.

A growing list of studies also suggests that Arctic warming may be linked to extreme winter weather in the mid-latitudes, like New England. A recent Nature Communications study found that extreme cold winter weather is two to four times more likely when temperatures in the Arctic are unusually high. Loss of Arctic sea ice and amplified Arctic warming are also likely contributing to these effects.

He notes that the eastern US has not seen much warming in winter in recent decades, and snowfall extremes have even increasing in intensity in this region. “This could be an interesting regional response to rising CO2 and decreasing sea ice extent, but given the large natural variability in winter temperatures and snowfall amounts, it is difficult to rule out that it is just unforced variability.”

Given all of this, it would not be unexpected for future storms to top the flooding that Boston saw during Riley and Grayson.

A Primer on Understanding Climate Science

This researcher helped coin the term ‘bomb cyclone.’ He did it to keep people safe.

How global warming can worsen snowfalls

How Tidal Information May Save You From a Coastal Crisis