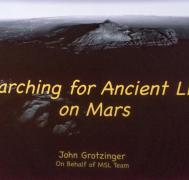 Addressing the Possibility of Life on Mars

Mars expert John Grotzinger tells the story of exploration and the search for ancient life on the red planet at the 2018 Carlson Lecture.

In 2018, millions around the world caught glimpses of the planet Mars, discernible as a bright red dot in the summer’s night skies. Every 26 months or so, the red planet reaches a point in its elliptical orbit closest to Earth, setting the stage for exceptional visibility. This proximity also serves as an excellent opportunity for launching Mars missions, the next of which will occur in 2020 when a global suite of rovers will take off from Earth.

While Mars hid behind the drizzling Boston sky on October 11th, 2018, an audience gathered at the New England Aquarium for the 8th annual John Carlson Lecture featuring Mars expert John Grotzinger, the Fletcher Jones Professor of Geology at the California Institute of Technology and a former professor in the MIT Department of Earth, Atmospheric and Planetary Sciences (EAPS). In his talk, Grotzinger gave audiences a different perspective of Mars, taking them through a journey of its geologic history as well as the current search for life on the planet.

Specializing in sedimentology and geobiology, Grotzinger has made significant contributions to understanding the early environmental history of the Earth and Mars and their habitability. In addition to involvement with the Mars Exploration Rover (MER) mission and the High Resolution Science Experiment (HiRISE) onboard the Mars Reconnaissance Orbiter (MRO), Grotzinger served as project scientist of the Mars Science Laboratory mission, which operates the Curiosity roving laboratory. Curiosity explores the rocks, soils and air of Gale Crater to find out whether Mars ever hosted an environment that was habitable for microbial life in its nearly 4.6-billion-year history. “What I’d like to do is give you a very broad perspective of how we as scientists go about exploring a planet like Mars, with the rather audacious hypothesis that there could have been once life there,” he said. “This is a classic mission of exploration where a team of scientists heads out into the unknown.”

“Simple one-celled microorganisms we know have existed on Earth for the last three-and-a-half billion years — a long time. They originated, they adapted, they evolved, and they didn’t change very much until you had the emergence of animals just 500 million years ago,” Grotzinger said. “For basically 3 billion years, the planet was pretty much alone with microbes. So, the question is: Could Mars have done something similar?”

Part of the research concerning whether or not Mars ever hosted ancient life involves identifying the environmental characteristics necessary for the survival of living organisms, including liquid water. Currently, the thin atmosphere around Mars prevents the accumulation of a standing body of water, but that may not always have been the case. Topographic features documented by orbiters and landers suggest the presence of ancient river channels, deltas and possibly even an ocean on Mars, “just like we see on Earth,” Grotzinger said. “This tells us that, at least, for some brief period of time if you want to be conservative, or maybe a long period of time, water was there [and] the atmosphere was denser. This is a good thing for life.”

To describe how scientists search for evidence of the past habitability on Mars, Grotzinger told the story of stratigraphy — a discipline within geology that focuses on the sequential deposition and layering of sediments and igneous rocks. The changes that occur layer-to-layer indicate shifts in the environmental conditions under which different layers were deposited. In that manner, interpreting stratigraphic records is simple: “It’s like reading a book. You start at the bottom and you get to the first chapter, and you get to the top and you get to the last chapter,” Grotzinger said. “Sedimentary rocks are records of environmental change…What we want to do is explore this record on Mars.”

While Grotzinger and Curiosity both continue their explorations of Mars, scientists from around the world are working on pinpointing new landing sites for future Mars rovers which will expand the search for ancient life. This past summer, the SAM (Sample Analysis on Mars) instrument aboard the Curiosity rover detected evidence of complex organic matter in Gale Crater, a discovery which further supports the notion that Mars may have been habitable once.

“We know that Earth teems with life and we have enough of a fossil record to know that it’s been that way since we get to the oldest, well-preserved rocks on Earth. But yet, when you go to those rocks, you almost never find evidence of life,” Grotzinger said, leaving space for hope. “And that’s because, in the conversion of the sedimentary environment to the rock, there are enough mineralogic processes that are going on that the record of life gets erased. And so, I think we’re going to have to try over and over again.”

Following the lecture, members and friends of EAPS attended a reception in the main aquarium that featured some of the research currently taking place in the department. Posters and demonstrations were arranged around the aquarium’s cylindrical 200,000-gallon tank simulating a Caribbean coral reef, and attendees were able to chat with presenters and admire aquatic life while learning about current EAPS projects. EAPS graduate student, postdoc and research scientist presenters included Tyler Mackey, Andrew Cummings, Marjorie Cantine, Athena Eyster, Adam Jost, and Julia Wilcots from the Bergmann group; Kelsey Moore and Lily Momper from the Bosak group; Eric Beaucé, Ekaterina Bolotskaya, and Eva Golos from the Morgan group; Jonathan Lauderdale and Deepa Rao from the Follows group; Sam Levang from the Flierl group; Joanna Millstein and Kasturi Shah from the Minchew group; and Ainara Sistiaga, Jorsua Herrera, and Angel Mojarro from the Summons group.

The John H. Carlson Lecture series communicates exciting new results in climate science to general audiences. Free of charge and open to the general public, the annual lecture is made possible by a generous gift from MIT alumnus John H. Carlson to the Lorenz Center in the Department of Earth, Atmospheric and Planetary Sciences, MIT.

Photos from the event

Software Finds the Best Way to Stick a Mars Landing

Exploring Mars with the Curiosity rover: The search for ancient habitable environments

It's time to rock and rove for MIT's Grotzinger