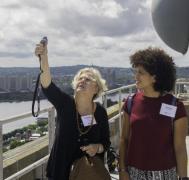 From geology and studies of deep time to climate and planetary sciences, researchers in MIT’s Department of Earth, Atmospheric and Planetary Sciences (EAPS) cover a lot of ground, literally and metaphorically. So, for incoming first year students looking to pursue an academic career in these fields or for those looking to get a taste for the topics addressed here, the pre-orientation program (FPOP), DEAPS, is a great place to start.

For twelve years, the department has been inviting freshmen to explore its offerings and resources during Discover EAPS (DEAPS). This FPOP aims to not only introduce students to one another, but also to the department and the institute’s diverse research through activities, engaging lectures and travel to experience the phenomena firsthand. Here, students can choose between two courses: “Yellowstone” or “Extreme Weather and Climate,” each providing a unique glimpse into EAPS.

The “Extreme Weather and Climate” annually draws those who are fascinated with hurricanes, excited about stargazing, concerned about how climate change is affecting the world around us, and avid about hiking to experience these in the real world on Mt. Washington.

Over the course of five days before the start of the semester, students indulged in this inquiry, led by EAPS senior lecturer Lodovica Illari, Cecil and Ida Green Professor of Oceanography John Marshall, research scientist Jeff Scott, and lab assistant Bill McKenna. The program opened with the highly anticipated activity: “measuring the height of the Green Building.” Using portable weather stations and infrared thermometers, students ascended to the roof, taking weather observations and noting the atmospheric pressure; they then repeated the procedure on ground level. TAs then helped students calculate the height of the structure using pressure differences and the more fun method: dropping various fruits from the top and timing their eventual splat. These skills would be employed later to help them understand the weather on Mt. Washington. The evening wound down with a night out in Cambridge with a pizza dinner at ZA followed by ice cream.

The second day was a whirlwind with hurricane dynamics. EAPS Kerr-Mcgee Career Development Assistant Professor Tim Cronin kicked off the day with a discussion of his research on the atmosphere. Cronin’s work focuses on role of regional-scale atmospheric dynamics, radiative transfer, and coupled surface-atmosphere interactions in the climate system, which is crucial when you think about how hurricanes form and accumulate strength. Cronin’s primer set the students up nicely to think about hurricane physics and meteorology. Once the group was split in two, they alternated between a rotating fluids demonstration, an analogue to a tropical cyclone, using “Weather in a Tank” and mathematical analysis of 2008’s hurricane Bertha, similar to those performed by meteorologists. The group also discussed current storms and those that occurred earlier in the Atlantic’s hurricane season. Following dinner, the group journeyed MIT's Wallace Astrophysical Observatory in Westford, MA, where EAPS senior lecturer Amanda Bosh greeted them. Bosh, an astronomer and planetary scientist, gave the students a tour of the facilities and helped them view various stars, galaxies, and nebulae through observatory’s telescopes.

The third day opened with a question: “What is responsible for “stormy” weather? What causes relatively warm temperatures one day and cold the next?” With the aid of the Weather in a Tank demonstration, instructors incorporated fluid laboratory experiments to explain the primary “ingredients” driving the general circulation of the atmosphere: Earth’s rotation and the (non-uniform) distribution of incoming solar radiation (differences in temperature between the poles and equator). Students observed the equivalent of the tropical Hadley Circulation and mid-latitude eddies i.e. weather systems.

Lastly came the crowning event of the FPOP: a trip to Mt. Washington in New Hampshire, where students could put their knowledge to the test while getting some fresh air away from Boston. Over 2.5 days, students, instructors and TAs hiked around the mountain area. On the way to the summit at 6,288 feet, students were exposed to the challenges of observational meteorology together with a direct experience of the mountain environment. Once there, they toured the Mt. Washington Observatory, which experiences harsh winters and regularly tracks weather conditions. Descent to an alpine garden offered a reprieve from the windier, cooler conditions of the summit. Here, students learned about the flora and fauna of the area and how climate change and altitude affect what is able to inhabit the region.

The group then took a short excursion to Diana’s Baths in North Conway and Pinkham Notch in Jackson for a lesson in geology. Climbing over rocks, steams and pools, students saw how ancient glaciers carved the landscape and felt the texture of different rock types, learning geomorphology and, in particular, the weather and climate conditions that influenced their formation.

This program would not be possible without the help of DEAPS graduate TAs (Tristan Abbott, Rose Palermo, Rohini Shivamoggi and Raphael Rizzi) and undergraduate TAs (Jordan Benjamin, Elisa Boles, Luke Hartnett, Alexandra Smerekanych, Sarah Weidman and Isabel Yuying Wu) who all contributed to its success. As one student commented, summing up the feelings of many, “DEAPS was amazing, and I'm so glad I chose this FPOP. Thank you!”