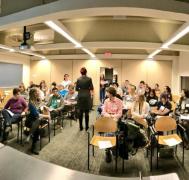 On Wednesday, November 29, the Department of Earth, Atmospheric and Planetary Sciences (EAPS) held an Impostor Syndrome Workshop for the EAPS community, organized by the department’s Women in Course XII (WiXII) initiative.

Read this story at Medium

The term “Impostor Syndrome” was first coined by clinical psychologists Pauline R. Clance and Suzanne A. Imes in 1978 in their paper ‘The Imposter Phenomenon in High Achieving Women: Dynamics and Therapeutic Intervention.’

The paper describes that “the term impostor phenomenon is used to designate an internal experience of intellectual phonies, which appears to be particularly prevalent and intense among a select sample of high achieving women.”

In the last few years, impostor syndrome has been a subject of widespread discussion in mainstream media after many high-achieving women like Maya Angelou, Robin Pollock Daniel, Sheryl Sandberg, Meryl Streep, Natalie Portman, Joyce Roche, among others publicly spoke about their fear of being discovered as ‘fraudulent’, where they believe that they aren’t as talented as others claim them to be.

Although impostor syndrome was initially researched as a phenomenon that women experienced, over the years the discussion has become more inclusive of people of all genders. The workshop at MIT was kept open to all students and saw participation from men and women.

Patrick Beaudry, a graduate student at MIT said he came to the workshop because he identified with impostor syndrome. “I don’t think this is a gender issue, although the ratio in this room also indicates that it’s more prevalent in women,” he says.

“We’re trying to cognitively rewrite the script,” Dr. Ballard said to introduce the purpose of the workshop. Divided into three parts, the workshop started with the ice-breaker ‘Two truths and a lie.” A few participants volunteered to share incidents from their life, which identified their impostor syndrome. The organizers had created a script that allowed participants to text their answers to the host, which then gets anonymously posted on to a server and shared with everybody.

The activities aim to get participants familiar with their impostor feelings and be part of a safe space where they could share them with everyone else but also doing so while sharing a laugh. For example, the second activity was ‘Impostor Syndrome’ Bingo, which described feelings like “I was admitted or hired because of some kind of mistake”, “Assume you will always fail so you will not be disappointed when you do”, “I should be able to anticipate problems before they occur”, “Eventually people will realize that I am under-qualified”, “It was mostly luck to have gotten into school, the job, the promotion, etc.” among others.

“There are two separate aspects to seeing the participation at these workshops — one that I see in my head and one that I experience in my heart. Just from looking at the word cloud responses on the screen and the number of people who attend, you realize that the problem is widespread. Strong words like ‘shame’, ‘nausea’, that have both a physical and emotional context, are used a lot at these workshops. People who experience this syndrome also share a deep sense of loneliness and hopelessness that I try to address by making the workshop more interactive. People are encouraged to share their stories, hopefully with some laughter, to ameliorate some of those tricky feelings like isolation,” says Dr. Ballard.

She closes the workshop with a value affirmation exercise that urges participants to share what they value about themselves, an effort she says many Universities are adopting in the U.S. as best practices. “I am trying to improve science culture by making it a part of my scientific identity. The impostor syndrome workshop is just one way I do that. I use particular strategies when I am mentoring and advising students to help them build confidence and their own scientific identity,” she says.

Dr. Ballard has been conducting Impostor Syndrome Workshops since 2009, back when she was a graduate student at Harvard University. She was part of the Harvard Graduate Women in Science and Engineering (HGWISE) that had invited Valerie Young, an expert on the Imposter Syndrome, to give a talk. Inspired by the turnout for the same, the group starting brainstorming ways to continue efforts that helped students at Harvard, who struggled with imposter syndrome. Dr. Ballard volunteered to start a three-part workshop that comprised a different set of activities based on Young’s workbook and has been continuing these workshops across universities in the U.S. She also writes articles and has a podcast with a few episodes dedicated to the impostor syndrome available on iTunes.

Meghana Ranganathan, a Ph.D. student at MIT who participated in the workshop says that she could identify her impostor feelings and give it a name after she came to MIT and heard about the workshop. “It will take me some time to process that all the stories shared and feelings I read out on the screen came from my peers, people who I interact with every day,” she says.

WiXII (Women in Course 12) is dedicated to fostering an environment that respects and supports all members of the EAPS community — including students, staff, faculty, and visitors of all genders, races, ages, sexualities, and abilities — as they further their careers. We serve as an active advocate for women’s and minorities’ rights in the Department, maintaining a space for constructive conversations about equality in academia and the workplace, especially relating to gender and diversity. We envision a respectful, welcoming community that supports the retention and equal treatment of women in all roles in the scientific community and inspires role models for the diverse future generations entering STEM.

Contact us to receive emails, or come to one of our events!

What WiXII Wants: How Women at MIT are Working for Equality

Support for Women in Course XII