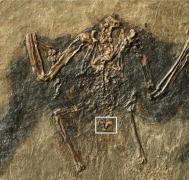 Expert analysis of fossil organic molecules by researchers in the Summons Lab provides palaeontologists with important new insight into how animal soft tissues fossilize and the importance of fats, or lipids, in that process.

Ancient rocks and oils contain a rich abundance of hidden information within them, including molecular and isotopic signatures of the organisms that existed at the time the organic matter in them was formed. Techniques developed in the Summons Lab extract and interpret these signals, in order to reconstruct ancient environments and understand how life evolved within them.

Now their analysis of a particularly well-preserved preen gland from a 48-million-year-old bird fossil has resulted in the discovery of original wax molecules within it, providing palaeontologists with important new insight into how animal soft tissues fossilize and the importance of fats, or lipids, in that process.

The research, led by former EAPS postdoc Shane O’Reilly (now at University College Dublin) and MIT Professor Roger Summons, collaborating with researchers in the School of Biological Sciences at the University of Bristol in the United Kingdom, and the Senckenberg Natural History museum in Frankfurt, Germany, is published today in Proceedings of the Royal Society B.

The fossil O’Reilly and Summons analysed is from the famous Messel locality in Germany, a trove of fossils from the Eocene and a place well known for the exceptional detail of its preserved birds, mammals, fish, reptiles, insects and plants.

In particular, the site is famous for the preservation of melanin seen in many of the animals found there and even the structural iridescence of beetle and moth fossils. Finding intact avian preening glands and the wax molecules within them, however, is an exciting new development.

Birds use their preening glands in maintaining their feathers. By secreting an oily substance onto their bill, the action of preening helps make feathers more waterproof, maintain their health and durability and even protect them from microbial degradation.

Jakob Vinther, a palaeobiologist, has been working for a long time with researchers at the Senckenberg Natural History museum in Frankfurt, Germany, on the preservation of melanin in birds and mammals from the Messel Shale. An ornithologist at the museum, Gerald Mayr, had noted preservation of the preening glands in some birds from Messel and together they realized that if wax from a fossilized gland could be extracted and analysed it would help shed light on how the gland came to be preserved. “Usually, only melanin is preserved in these sorts of fossils; all the keratin and other proteins are lost,” Vinther says. “We know that some fats, or lipids, may be preserved as they have been observed in extracts of sediments and fossil plants. We could therefore expect to find that the waxy material could be extremely well preserved and give us new insights into what may also preserve in vertebrate fossils.” However, at that time, to aid in their conservation, all previously collected samples of fossilized preening glands had been embedded in resin plates coated with varnish, complicating analysis.

So, when a field crew from Senckenberg working to excavate in Messel discovered a new bird fossil containing a preserved wax gland Vinther immediately contacted his colleague at the Massachusetts Institute of Technology (MIT), Roger Summons, and a postdoc in his lab, Shane O’Reilly, who were equally excited to undertake the study of the fossil bird wax.

The Senckenberg preparator, Michael Ackermann, painstakingly collected the fossilised wax, (which could be scooped out of the fossil “like cold butter”) and carefully wrapped it in sterile aluminium foil for the journey to MIT.

When the material was analysed in the Summons Lab alongside control samples from the sediment and the preserved feathers associated with the bird fossil, a clear pattern emerged: the preening gland preserved the waxy molecules produced by the bird in beautiful detail.

The sediment that hosts the fossil is a so-called oil shale, was full of various fossil lipid molecules from dead plant and algal matter, while the lipids from the preening gland contained longer carbon chain lengths that the ones in the surrounding sediment and even more complex structures that were entirely absent from the sediment.

The next step in this work will be to look for fossil preening glands in dinosaurs. “The research is a milestone for palaeontologists.” Vintner says. “We have discovered preserved wax material in a bird and it is likely that we can look for the origin of this important gland and see if dinosaurs also used oil glands to preen their feathers.”

Adapted from the University of Bristol press release