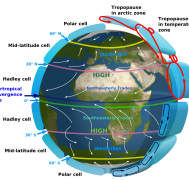 The Intertropical Convergence Zone (ITCZ), also known as the doldrums, is one of the dramatic features of Earth’s climate system. Prominent enough to be seen from space, the ITCZ appears in satellite images as a band of bright clouds around the tropics. Here, moist warm air accumulates in this atmospheric region near the equator, where the ocean and atmosphere heavily interact. Intense solar radiation and calm, warm ocean waters produce an area of high humidity, ascending air and rainfall, which is fed by converging trade winds from the northern and southern hemispheres. The convected air forms clusters of thunderstorms characteristic of the ITCZ, releasing heat before moving away from the ITCZ – toward the poles – cooling and descending in the subtropics. This circulation completes the Hadley cells of the ITCZ, which play an important role in balancing Earth’s energy budget — transporting energy between the hemispheres and away from the equator.

However, the position of the ITCZ isn’t static. In order to transport this energy, the ITCZ and Hadley cells shift seasonally between the northern and southern hemispheres, residing in the one that’s most strongly heated from the sun and radiant heat from the Earth’s surface, which on average yearly is the northern hemisphere. Accompanying these shifts can be prolonged periods of violent storms or severe drought, which significantly impacts human populations living in its path.

Balancing inter-hemispheric heating in the tropics

Scientists are therefore keen to understand the climate controls that drive the north-south movement of the ITCZ over the seasonal cycle, as well as on inter-annual to decadal timescales in Earth’s paleoclimatology up through today. Researchers have traditionally approached this issue from the perspective of the atmosphere’s behavior and understanding rainfall, but anecdotal evidence from models with a dynamic ocean has suggested that the ocean’s sensitivity to climate changes could affect the ITCZ’s response. Now, a study from Graduate student Brian Green and the Cecil and Ida Green Professor of Oceanography John Marshall from the Program in Atmospheres, Oceans and Climate in MIT’s Department of Earth, Atmospheric and Planetary Sciences (EAPS) published in the American Meteorological Society’s Journal of Climate, investigates the role that the ocean plays in modulating the ITCZ’s position and appreciates its sensitivity when the northern hemisphere is heated.

To examine this, Green and Marshall performed aquaplanet experiments in a global climate model with a coupled atmosphere and ocean, and observed how the ocean circulation’s cross-equatorial energy transport and its associated surface energy fluxes affected the ITCZ’s response when they imposed an inter-hemispheric heating contrast. Using a simplified model that omitted landmasses, clouds and monsoon dynamics, while keeping a fully circulating atmosphere that interacts with radiation highlighted the ocean’s effect while minimized other confounding variables that could mask the results. The addition of north-south ocean ridges, creating a large and small basin, mimicked the behavior of the Earth’s Atlantic’s meridional overturning circulation (AMOC) and the Pacific Ocean.

Green and Marshall then ran the asymmetrically heated aquaplanet simulations in two ocean configurations and compared the ITCZ responses. The first used a stationary “slab ocean”, where the thermal properties were specified so that it mimicked the fully coupled model before perturbation, but was unable to respond to the heating. The second incorporated a dynamic ocean circulation. By forcing the models identically, they could quantify the ocean circulation’s impact on the ITCZ.

“We found in the case where there’s a fully coupled, dynamic ocean, the northward shift of the ITCZ was damped by a factor of four compared to the passive ocean. So that’s hinting that the ocean is one of the leading controls on the position of the ITCZ,” Green says. “It’s a significant damping of the response of the atmosphere, and the reason behind this can just be diagnosed from that energy balance.”

In the dynamic ocean model, they found that when they heat the aquaplanet, eddies export some heat into the tropical atmosphere from the extra-tropics, which causes the Hadley cells to respond – the northern hemisphere cell to weaken and the southern cell to strengthen. This transports heat southward through the atmosphere. Concurrently, the ITCZ shifts northward; associated with this are changes in the trade winds — the surface branch of the Hadley cells — and the surface wind stress near the equator. The surface ocean feels this change in winds, which energizes an anomalous ocean circulation and moves water mass southwards across the equator in both hemispheres, carrying heat with it. Once this surface water reaches the extra-tropics, the ocean pumps it downwards where it returns northward across the equator, cooler and at depth. This temperature contrast between the warm surface cross-equatorial flow and the cooler deeper return flow sets the heat transported by the ocean circulation.

“In the slab ocean case, only the atmosphere can move heat across the equator; whereas in our fully coupled case, we see that the ocean is the most strongly compensating component of the system, transporting the majority of the forcing across the equator. So from the atmosphere’s perspective, it doesn’t even feel the full effect of that heating that we’re imposing. And as a result, it has to transport less heat across the equator and shift the ITCZ less.” Green noted that the response of the large basin ocean circulation broadly mimics the Indian Ocean’s yearly average circulation.

Marshall added that the ability of the wind-driven ocean circulation to damp ITCZ shifts represents a previously unappreciated constraint on the atmosphere’s energy budget. “We showed that the ITCZ cannot move very far away from the equator, even in very ‘extreme’ climates,” indicating that the position of the ITCZ may be much less sensitive to inter-hemispheric heating contrasts than previously thought.”

Green and Marshall are currently expanding upon this work. With the help of David McGee, the Kerr-Mcgee Career Development Assistant Professor in EAPS, and postdoc Eduardo Moreno-Chamarro, the pair are applying this to the paleoclimate record during Heimrich events, when the Earth experiences strong cooling, looking for ITCZ shifts.

They’re also investigating the decomposition of heat and mass transport between the atmosphere and the ocean, as well as between the Earth’s oceans. “The physics that control each of those oceans’ responses are dramatically different, certainly between the Pacific and the Atlantic oceans,” Green says. “Right now, we’re working to understand how the mass transports of the atmosphere and ocean are coupled. While we know that they’re constrained to overturn in the same sense, they’re not actually constrained to transport an identical amount of mass, so you could further enhance or weaken the damping by the ocean circulation by affecting how strongly the mass transports are coupled.”

Story Image: This image is a combination of cloud data from NOAA’s Geostationary Operational Environmental Satellite (GOES-11) and color land cover classification data. The ITCZ is the band of bright white clouds that cuts across the center of the Earth. (Photo: NOAA’s GOES Project Science Office)

John Marshall is an oceanographer interested in climate and the general circulation of the atmosphere and oceans, which he studies through the development of mathematical and numerical models of key processes. His research has focused on problems of ocean circulation and coupled climate dynamics involving interactions between motions on different scales, using theory, laboratory experiments, observations and new innovative approaches to global ocean modeling pioneered by his group at MIT.

An Ocean of Curiosity Oceans at MIT

Annual Meeting of the Ozone and Climate Project Oceans at MIT

Southern Ocean Cooling in a Warming World Oceans at MIT

Diving into the Pale Blue Dot Oceans at MIT