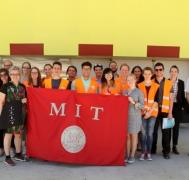 Paola Malanotte-Rizzoli to Give Carson Lecture at AGU's Fall Meeting

From the works of Shakespeare and Vivaldi to entire stylistic and musical movements, “the floating city” of Venice’s architecture and culture has inspired many throughout the centuries. But Venice has a problem that’s equally as famous: acqua alta or high waters, which regularly flood parts of the city, and have captured the world's attention for centuries. For MIT scientist and Italian native, Paola Rizzoli, this issue hit home, influencing her career to understand the complexities of the climate system and helping to protect the most beautiful city in the world from becoming a literal "City of Water.”

In recognition of her accomplishments in the field of physical oceanography and their application to societal issues – particularly understanding and mitigating Venice’s storm surges -- Paola Rizzoli, a professor of physical oceanography in MIT’s Department of Earth, Atmospheric and Planetary Sciences (EAPS) and a member of the Program in Oceans, Atmospheres and Climate (PAOC), will give the Rachel Carson Lecture during the Ocean Sciences section of AGU's Fall Meeting, held in New Orleans, Louisiana. The annual, named lecture honors the life and work of the famed marine biologist, known for her environmental work on the pesticide DDT and its detrimental effects, documented in the book Silent Spring. The individual chosen to present the Rachel Carson lecture is a female scientist who exemplifies Carson’s work with cutting-edge ocean science, especially science relevant to societal concerns.

“Venice is the dominant theme of all my life,” says Rizzoli, whose autobiography “Venice and I: How a City Can Determine the Fate of a Career” appeared in the Annual Review of Marine Science. “I started in Venice and came to physical oceanography because of the problem of storm-surges and the associated devastating waves. This is a physical oceanography problem.” As a theoretical physicist turned physical oceanographer, Rizzoli’s research interests are as broad as they are deep—including investigating and modeling nonlinear coherent structures such as oceanic rings shed by western boundary currents and atmospheric blocking in the atmosphere; circulation and water mass formation processes of marginal, semi-enclosed seas such as the Mediterranean and Black Sea, including modeling of their shallow water ecosystems (northern Adriatic, Black Sea shelf); as well as the processes characterizing the tropical oceans (tropical Atlantic, South China Sea and Indonesian Through-Flow) and of their ocean/atmosphere coupled modes of interaction. She’s also developed novel, theoretical methods for the assimilation of oceanic observations into general circulation ocean models.

But the study and prediction of the extreme floods affecting the city of Venice, Italy, and of its lagoon, and the construction of the mobile barriers has been the leitmotif of her career. Since 1995, Rizzoli has been involved with collaboratively planning, designing, and implementing a barrier system to prevent extreme flooding events. This meant conducting hydrodynamic and ecosystem modeling to assess different solutions, and ultimately supervising the construction of the Modulo Sperimentale Elettromeccanico (MOSE) system of movable barriers. These temporarily block three inlets, which connect the lagoon to the northern Adriatic Sea, whose storm surges were responsible for the flooding. The MOSE utilizes sophisticated sea level forecasting models to determine when to open and close the gates.

But dust does not settle on Rizzoli. In addition to shifting her research focus every 5-7 years – her “renewal time” – Rizzoli has chaired and directed several programs at MIT. She was appointed the first Singapore-MIT Alliance for Research and Technology program chair for the year 2013 and directed the MIT-Woods Hole Oceanographic Institution Joint Program for 12 years. During her extensive teaching career, she served on advising committees for 53 graduate students in physical oceanography, meteorology, geophysics, and ocean engineering. As the only woman professor of oceanography at MIT, Rizzoli helped increase the number female professors at the institute as well as scientists in the field -- establishing Mentoring Physical Oceanographic Women to Increase Retention (MPOWIR) and served on the first advising committees on the Status of Women Faculty in Science and Engineering.

These accomplishments are only a handful of reasons why Rizzoli was selected by her peers to give this year’s Rachel Carson lecture. “She is a brilliant scientist, as recognized by being elected a Fellow of AGU and AMS, and part of her work over all the years, starting with choosing to become an oceanographer, was motivated by environmental concerns in Venice, her original home,” said Lynne Talley, Distinguished Professor of Physical Oceanography at Scripps Institution of Oceanography and chair of AGU’s Ocean Sciences in an email. “She has been an excellent mentor to her students, and one of the original enthusiastic movers behind MPOWIR, which has been working for many years now to mentor junior women in physical oceanography.” Nominator M. Susan Lozier, the Ronie-Richelle Garcia-Johnson Professor of Earth and Ocean Sciences at Duke University, shared these sentiments, recognizing Rizzoli’s leadership and contributions to the study of coastal oceanography, Mediterranean Sea circulation, data assimilation, and adjoint modeling. Lynn added, “And finally, we know that she will give an excellent and interesting lecture.”

On November 4th, 1966, 50 years ago, Venice was affected by the highest flood in its millennial history. The city was submerged by almost 2 meters of water and the flood lasted almost two days. One island, Pellestrina, was completely submerged, and almost destroyed in its narrowest part, by waves 4 meters high, with 3,000 inhabitants being evacuated. Damages in the city were enormous, leading to destruction of antique artifacts in the level and sublevel floors of the city museums. This event brought the city to the world attention. The National Research Council of Italy established an Institute to study and understand the problems of the city, i.e. sinking (subsidence) and flooding (the Adriatic sea storm surge), finally aiming to reach a forecasting capability of the sea level sufficiently in advance especially for the extreme events. The Italian government also passed a special law to provide financing to the city for different purposes, including protection and adaptation to "high waters", i.e. the floods. Foremost among them was the MOSE system, i.e. a system of movable barriers to be constructed across the three inlets of the lagoon, which would close upon arrival of floods exceeding a prescribed height, thus effectively separating the lagoon from the sea. The construction of the barriers started in 2003 and, in spite of many delays due to multiple causes, is now on its final stage to completion. A review of the lagoon history will be given, explaining the geological causes of subsidence -- natural and anthropic -- and the oceanographic cause of the floods, i.e. the Adriatic Sea storm surge. A review will also be given of the principles of construction of the inlet barriers and of the present state of the works. Finally, a new educational collaborative initiative between MIT, the Venice University of Architecture and the Consortium of industries designated to the barriers’ construction will be presented. The first action of this initiative was a Summer School in the Pellestrina island, May 29-June 9, 2017, followed by summer stages for 12 MIT students (undergraduates and graduates) together with 12 Italian architecture students working together in interdisciplinary projects.