While research into the Earth’s processes, the climate, and its dynamics has come a long way in the last several decades, there is still more to be done, say climate researchers. For many years, two global-scale questions animated climate science: Is the world warming, and how much are humans contributing to it? But now that basic research has largely answered those fundamental questions, new questions — that are scientifically provocative and socially valuable — are needed to guide future climate science.

To address this, climate scientists gathered last summer for a “thinking outside of the box” workshop organized by the World Climate Research Program. There, they developed three questions that may seem simple, but which encapsulate the profound scientific challenges the field still faces. The questions also get to the heart of the climate information society needs in order to make informed decisions on responses to anthropogenic climate change.

Climate@MIT recently spoke with one of the group members, MIT associate professor of atmospheric science Paul O’Gorman, about the new questions and a related paper, “Climate research must sharpen its view,” published this year in Nature Climate Change Commentary.

Q: What were the three key questions that were developed to guide the future international climate research effort, and from where did they stem?

A: In terms of public discussion and to some extent scientific discussion, the two big questions have been: Is the world warming? And, if so, how much are humans contributing to it? And those are very simple questions that are easy to communicate to someone who’s not a specialist in this area. But those two questions are no longer as interesting, in terms of science, because we know the world is warming, and we know that humans are contributing substantially to it. So our aim for this paper was to try and frame similarly simple questions that catch the imagination, that are easy to understand yet scientifically important, and that speak to the exciting research that’s going on to push forward into the unknown.

And so we came up with – fairly easily actually – three questions: Where does the carbon go? Second, how does the weather change with climate? Third, how does climate influence the habitability of the Earth and its regions? These are not new questions, but we think they encapsulate a lot of what’s important and exciting in current climate research.

Q: What scientific concepts and complexities are encompassed by these three frontier questions?

A: The first one is about the carbon cycle. Various human activities are leading to emissions of carbon, which goes into the atmosphere, land, or ocean. And a big scientific question is: How will this affect the carbon cycle? Will the land and ocean continue to take up the carbon in the same way they have been doing, or will that change? What will be the feedback on climate? That is a really key question, and one of the reasons we want to know, “Where does the carbon go?” The other reason relates to international agreements, in particular the [2015] Paris Agreement. Looking into the future, we need to understand the carbon cycle well in order to understand how well that agreement is working.

The second question is something I work on, which is: How do weather and the circulation of the atmosphere respond to climate change? When talking about climate change, we often think of aggregate measures like the global mean surface temperature. But, of course, we experience weather on much smaller length scales and much shorter time scales. And it turns out it’s surprisingly difficult to accurately answer, for example, how precipitation extremes are affected by climate change.

There are two reasons, I would say, for that. One is that there is a wide range of spatial scales involved, from the global scale — the largest circulations in the atmosphere — right down to small scale and all scales in between. For example, atmospheric convection can be just one small cumulus cloud, or it could be a thunderstorm, or it could be an organized system that’s closer to continental in scale. So, there are many different scales of climate features that interact and make convection challenging to understand.

The second reason is the atmosphere and ocean are very non-linear, turbulent systems, and that’s inherently more challenging to deal with.

I think we’ve had our greatest success studying climate and climate change at very large scales. But when one goes to regional scales, or country-level or parts of countries scales, that is more challenging. That’s because of internal, unforced variability on the regional scale that would have occurred regardless of humans forcing the system and because regional changes strongly depend on the circulation of the atmosphere, which is difficult to model well (e.g. regional precipitation is more difficult to model than global average precipitation).

The third question relates to habitability; two good examples of that are heat stress and sea level rise. As the climate warms, the level of heat stress will increase. That is straightforward, but knowing when and where we reach limits of adaptability is not straightforward. Heat stress involves not just average temperature, but also weather extremes and the water cycle. For example, the extent to which summer heat extremes occur depends on what’s happening to water in the soil, and that’s something that’s difficult to understand and constrain. Also in the tropics, there’s the possibility of reaching unprecedented levels of heat stress as the climate warms. That’s obviously a concern and something that needs to be understood better.

Another good example is sea level rise, which reduces the land area that is suitable for us to live on. Again, that involves very challenging scientific questions, such as what happens to ice sheets, and how to get tighter estimates of the climate sensitivity — the amount of warming for a given amount of CO2 emitted to the atmosphere.

Q: In your Nature Climate Change commentary, you also mentioned that climate research will face challenges going ahead. What are some examples?

A: Yes, one of the challenges is how to have the right balance between applied and fundamental research and not limit ourselves to short-term questions. To have a robust science, we have to expand our focus beyond our current climate. For example, there may be surprises in the climate system such as periods of less or more accelerated warming. So, we need to have a science that isn’t too narrow because we don’t know exactly what information going to be important in the future. That implies the need to do basic research. At the same time, there’s a lot of pressure to apply the models and all the data that we have already.

Another important challenge is how we can maintain the observational record going forward. We need high-quality, long-term observations to be able to understand how the climate system is changing, for example, from satellites, but also from weather balloons and other in situ observations, and of the ocean. At the same time, we’d like to understand Earth processes better. And that leads to a tension: We want to understand particular phenomena with the latest technology available, but at the same time — given limited resources for research — maintain the long record that’s necessary for climate monitoring and to inform modeling. Most of these climate records are maintained by governments around the world, so it’s important to emphasize the need to maintain the records so we can understand the system to the best of our ability.

An interesting question, in terms of challenges, is how best to improve climate models. An aspect of that which is being debated at the moment is: Should every country have its own climate model, or indeed should some countries have many climate models? How important is it to have this diversity of models from different countries, or should we put more of our resources into a few presumably better climate models — better run and on bigger machines?

Having a diversity of models — using different approaches and different coding methods and so forth — is helpful in that one can tell, if the models are disagreeing on some prediction or projection or some aspect of their simulations, then that’s an area that needs to be worked on and that’s probably not trustworthy.

The question is: Should we, given finite resources, pool them into a smaller number of models? Certainly not one, but currently, for example, Europe has many. The U.S. has many models. I don’t think that anyone’s arguing we should just have one modeling center or one computer that we run models on. But one could imagine reducing them down to three or four models that more effort is put into.

What’s the right number? An answer to that question hasn’t emerged yet, but that’s one of the issues that people are talking about now.

So, we’d hope that, some questions like the ones we’ve raised are leading to a robust and dynamic scientific community that works on these problems. 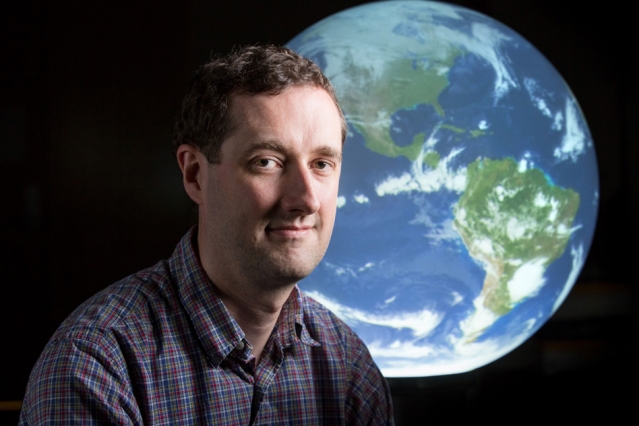 Paul O’Gorman is interested in the large-­scale dynamics of the atmosphere, the hydrological cycle, moist convection, and climate change. Recent work has focused on the response of precipitation extremes to climate change, the intensity of extra-tropical storm tracks, and the difference in warming between tropical oceans and land areas.

O'Gorman earned his PhD in aeronautics with a minor in applied mathematics in 2004 at the California Institute of Technology. He also holds an MSc in High-­Performance Computing and a BA in Theoretical Physics from Trinity College, Dublin. He joined the MIT faculty in 2008.

The Future of Epic Blizzards in a Warming World Scientific American