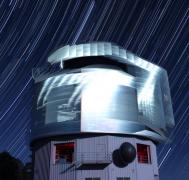 Our telescope operator is sprinting between the telescope and auxiliary buildings, leaping over small clumps of grass as gracefully as one of the local pronghorn antelope.  Heidi Larson knows that we are pressed for time, and is going through all of the startup checks at the 4.3-meter Discovery Channel Telescope as quickly as she can, while still being complete.

We are preparing for a stellar occultation by Triton, to be observed on SOFIA (the Stratospheric Observatory for Infrared Astronomy).  Minutes count, as we have a hard deadline by which the flight planners need to receive information.  Where will SOFIA be flying to catch this occultation?

By their nature, stellar occultation observations are usually large collaboration events; this is even more true when SOFIA is in the mix.  We are attempting to predict the location of the central flash of Triton, some 100 km wide at a distance of 4.5 billion km.  In angular terms, this is about 1 milli-arcsecond.  To achieve this, we work with collaborators to refine the astrometry of Triton and the occultation star, and thus refine the prediction.  We are hoping our prediction will be accurate enough to navigate SOFIA into this tiny central flash zone, thereby providing data that will probe the lower levels of Triton's atmosphere that are not accessible with a non-central occultation.

To achieve this level of accuracy, we had the benefit of ultra-precise positions and proper motions for the occultation star AND the other stars nearby.  These positions were from the Gaia Data Release 2 catalog, made public by the Gaia team for use by those planning to observe this occultation.

The data from the DCT and another telescope across town at the U.S. Naval Observatory have been reduced, using the Gaia pre-release star positions.  The revised prediction has been uploaded to our website for this event; astronomers across the eastern U.S., Europe, and northern Africa will get this information and adjust their observing plans, if they're able.

At a few minutes before 3pm EDT today (5 October 2017), the 747SP that is SOFIA will taxi down the runway at the Daytona Beach International Airport in Florida, and will take off for a night of observing the Triton occultation--and maybe the central flash.

Dr. Amanda Bosh is a Senior Lecturer in EAPS, and is the lead of the Astrometry Team.  She and EAPS Senior Research Associate Carlos Zuluaga, have just sent the updated prediction to the SOFIA flight planning team, and will now be watching anxiously to see what happens.

EAPS Research Scientist and Wallace Observatory Director Dr. Michael Person is the Principal Investigator for the Triton occultation observations on SOFIA, and will be on SOFIA collecting data during the event.

Update: The observation of the Triton Occultation aboard SOFIA was a success!

Dr. Michael Person reports that the team collected data with three instruments simultaneously, including the HIPO camera developed jointly between Lowell Observatory and MIT, and confirmed that the prediction sent by Dr. Amanda Bosh was correct as the central flash was observed!

Amanda Bosh is an astronomer and planetary scientist. Her research focus includes studies of the atmospheres of icy bodies in the outer solar system and the kinematics of planetary rings, both utilizing a technique known as stellar occultation.