Starting with a lively poster session, guests mingled with student presenters and asked questions on topics ranging from earthquakes to air pollution to origins of life. EAPS Department Head Robert van der Hilst welcomed and introduced everyone and we heard science presentations from two Grayce B Kerr fellows, one present and one past.

Marie Zawadowicz, the 2016-17 Grace B. Kerr Fellow, a student in Prof. Dan Cziczo’s lab, kicked off by speaking about the development of field and laboratory instrumentation to solve problems in atmospheric chemistry and climate. Her talk "Chasing the Clouds” focused on research through mass spectrometry of single aerosol particles, that will lead to an improved understanding of cloud physics, and hopefully more accurate climate models.

Julien De Wit PhD '13 (XII), the 2011-12 Grayce B. Kerr Fellow, now a postdoc in Sara Seager’s group, spoke about  "New Worlds, New Discoveries: A major leap in the search for life beyond our Solar System", explaining the significance of the exciting TRAPPIST-1 planetary system discovery, and his role in leading the atmospheric characterization of the newly discovered exoplanets that may help us to find another habitable world.

EAPS Patrons Circle Chair and MIT Corporation member Neil Rasmussen ’76, SM ’80 and his wife Anna Winter Rasmussen, both staunch supporters of climate science and EAPS work training climate thought leaders for the future, have supported graduate fellows in climate science every year since 2013, endowing the Norman C. Rasmussen Fellowship Fund in perpetuity in 2015. The fellowships are named in honor of Neil’s father Norman C. Rasmussen, professor of Nuclear Engineering at MIT from 1958-1994.

In his closing keynote, Rasmussen chose to highlight two historic scientific figures Christiaan Huygens and Jorge Agricol, who, centuries ago, were willing to stand up for science and technology and, in Huygen’s case, to express rather controversial views at the time about the possible existence of life on other planets. Rasmussen reflected on recent changes in the political climate that appear to be turning the clock back towards the suppression of science (particularly climate science), and he advocated eloquently for the continuing importance of supporting science and the study of our planet to safeguard our future, particularly at this time when the wisdom of science appears to be in question.

Founded in 2015, EAPS Patrons Circle honors donors who have made a major gift to an EAPS fellowship fund or made a major commitment to support EAPS graduate students through their estate plans. At our recent gathering, new EAPS Patrons Peter and Marty Hurley were welcomed, along with fellow Patrons Patricia Callahan and David Dee, John Carlson, Robert Cowen, George Elbaum and Mimi Jensen, Douglas Klein, Gordon Klein, Paola Rizzoli, Nafi Toksöz and Charlotte Johnson, and, of course, Neil and Anna Winter Rasmussen. 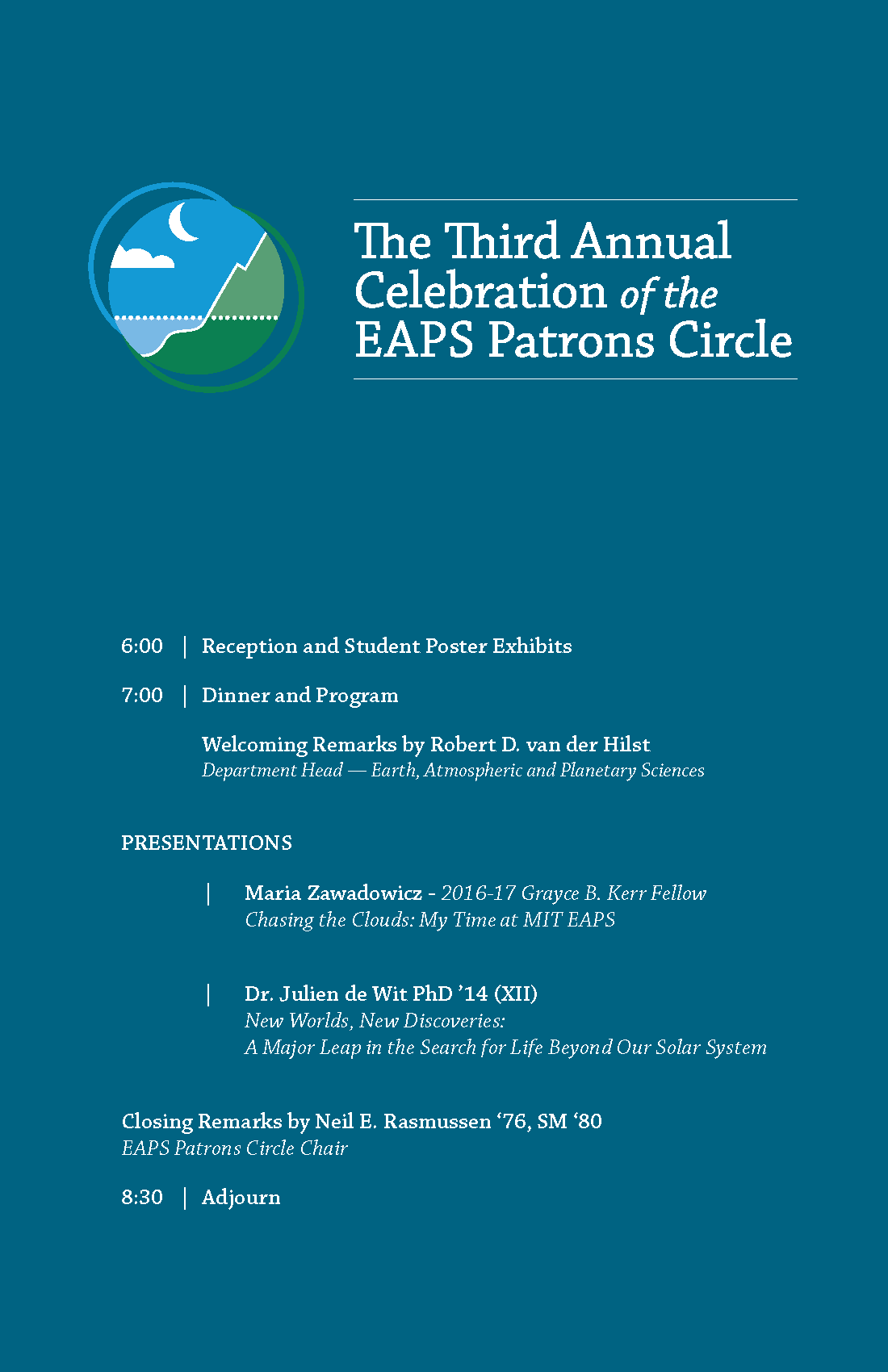