Question: What’s the best thing to do when it’s time to go back to school? Answer: Head out of town for a week in the field.

In late August Kristin Bergmann led a trip of EAPSters to see the world-famous Ediacaran fossils, ophiolites and suture zones, Snowball Earth deposits, Quaternary glacial valleys and fjords of Newfoundland, an island that straddles no less than three ancient continents. Bergmann, whose research focuses on reconstructing the record of environmental change from observations of sedimentary rocks spanning Precambrian to end-Ordovician time, was joined by fellow geobiology faculty colleagues Gregory Fournier and Roger Summons. The trip, open to students across EAPS irrespective of program, comprised five undergraduates, and four graduate students in the Program in Geology, Geochemistry and Geobiology (PGGG), two from the Program in Geophysics (PG), one from the Program in Planetary Science (PPS), two from the Program in Atmospheres, Oceans and Climate (PAOC), and eight members of the MIT-WHOI Joint Program. 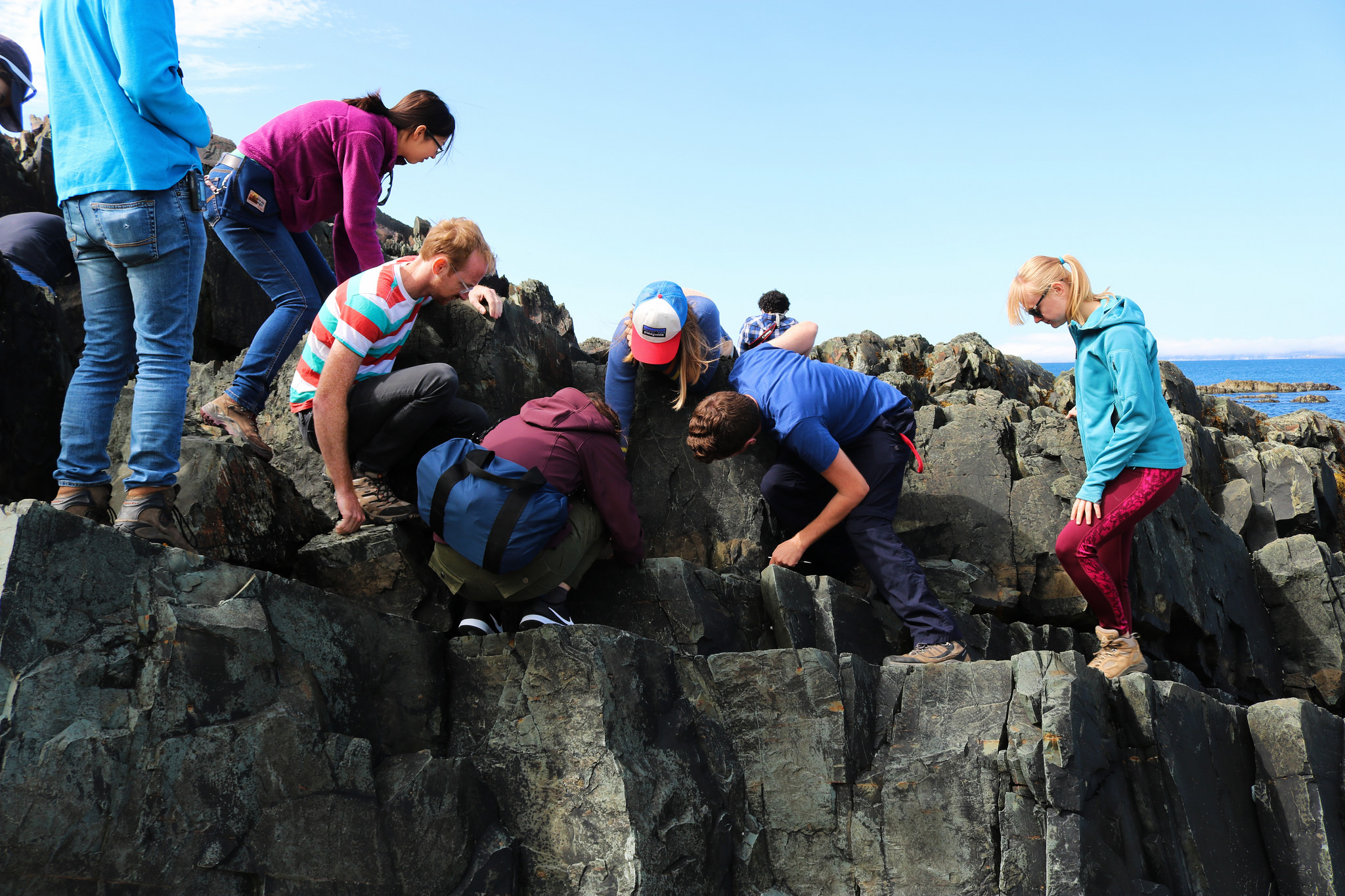 The educational vision for these trips (this is the third, the first, led in 2015, by Ben Weiss, Oliver Jagoutz and Leigh Royden, took a group to the Himalayas and the second, led by Tim Grove, took a group of students to the Cascades) is to bring EAPS students and faculty from across the department into the field, see a range of geology, and learn about it together through the multiple lenses the broad range of disciplines in the department provide. 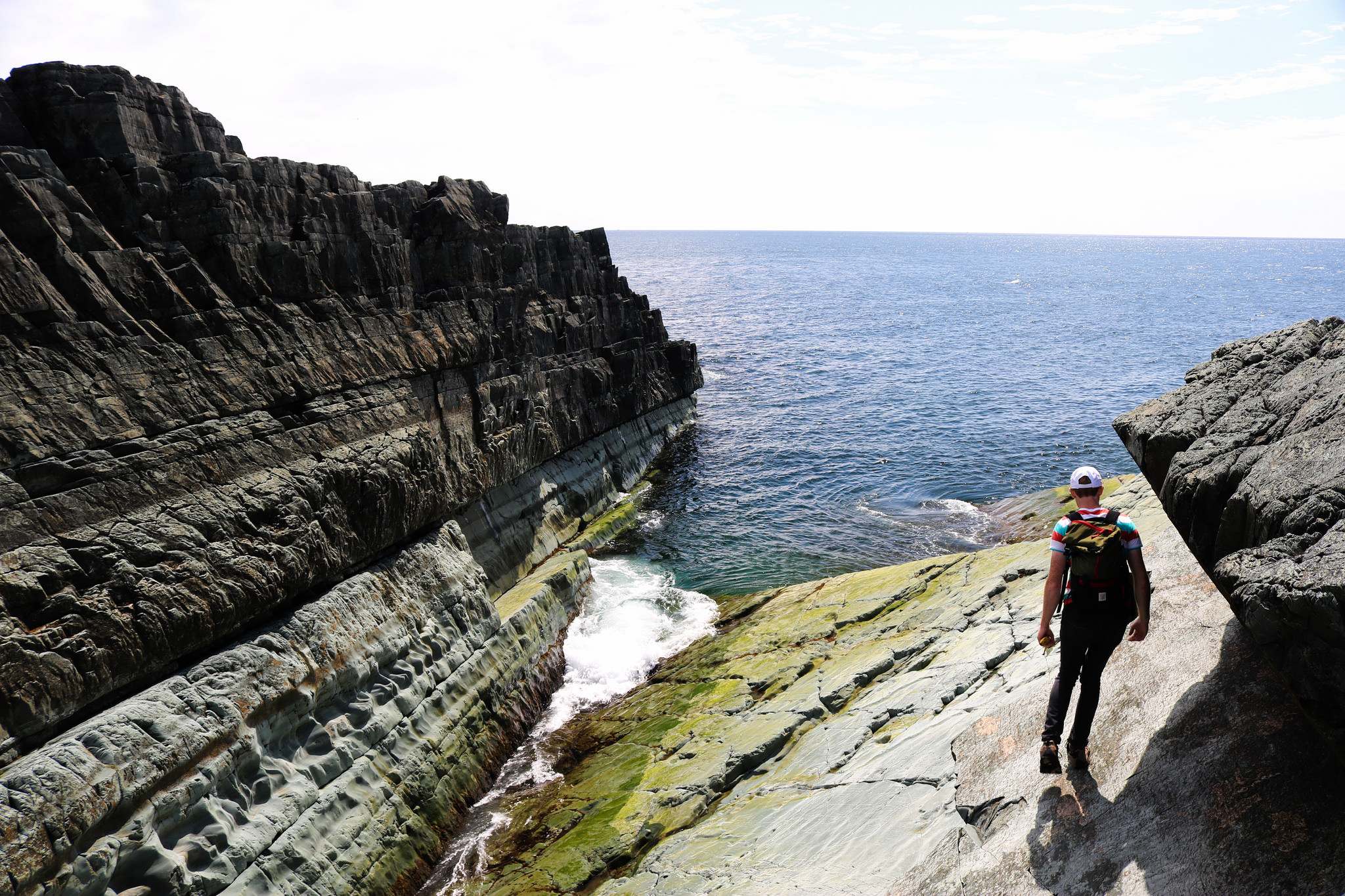 Bergmann says her teaching strategy for this trip was to leverage the breadth of expertise among the students involved.  Each student was expected to familiarize themselves with a particular topic ahead of the trip (usually something related to their own scientific interests), prepare an introduction to it for the trip’s field guide, and give an 'on the outcrop lecture' while in the field.  Bergmann was enthusiastic about the results: “We heard from everyone on a very diverse topic list -- everything from Pleistocene and Holocene climate of Newfoundland, and overfishing of the Grand Banks, to ophiolites and Ediacaran fauna.” 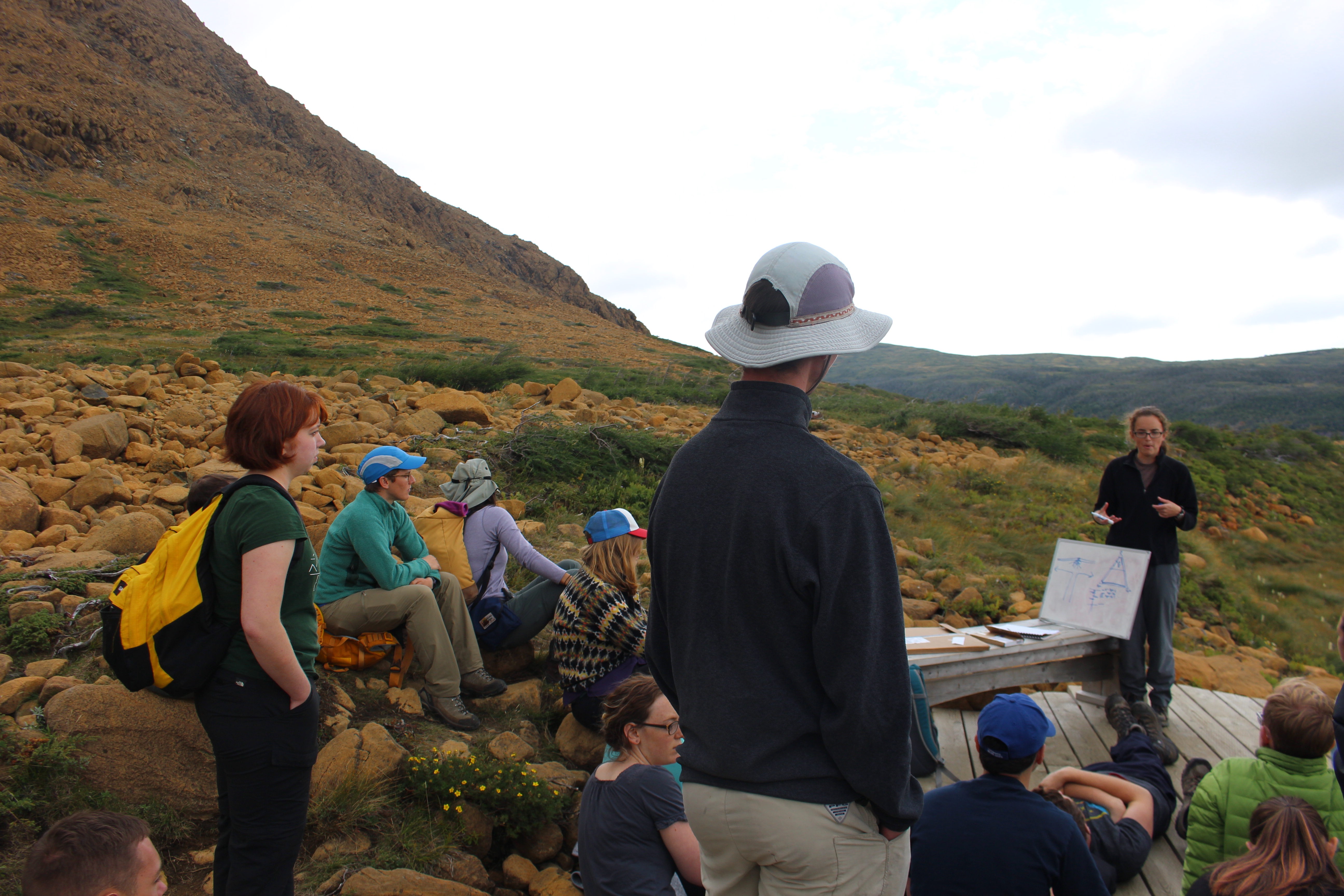 The trip worked its way from east to west across the island, with a diverse array of geologic sites of interest along the way. Although the itinerary meant a lot of driving, it allowed the group to see the amazing breadth of geology that Newfoundland has to offer (and the driving was made more bearable by a combination of sandwiches, snacks and sea shanty singing).  Bergmann says, “We would mix in some hiking to look at the best geology exposures along the way.”

Most nights the group stayed in hotels, but for the two days they spent in Gros Morne National Park, a world heritage site located on the west coast of the island, the accommodation was self-catering cabins allowing for cooking in small groups. Bergmann says everyone was grateful for the weather, which was “lovely, sunny and fall-like with only a little rain at the very end.” 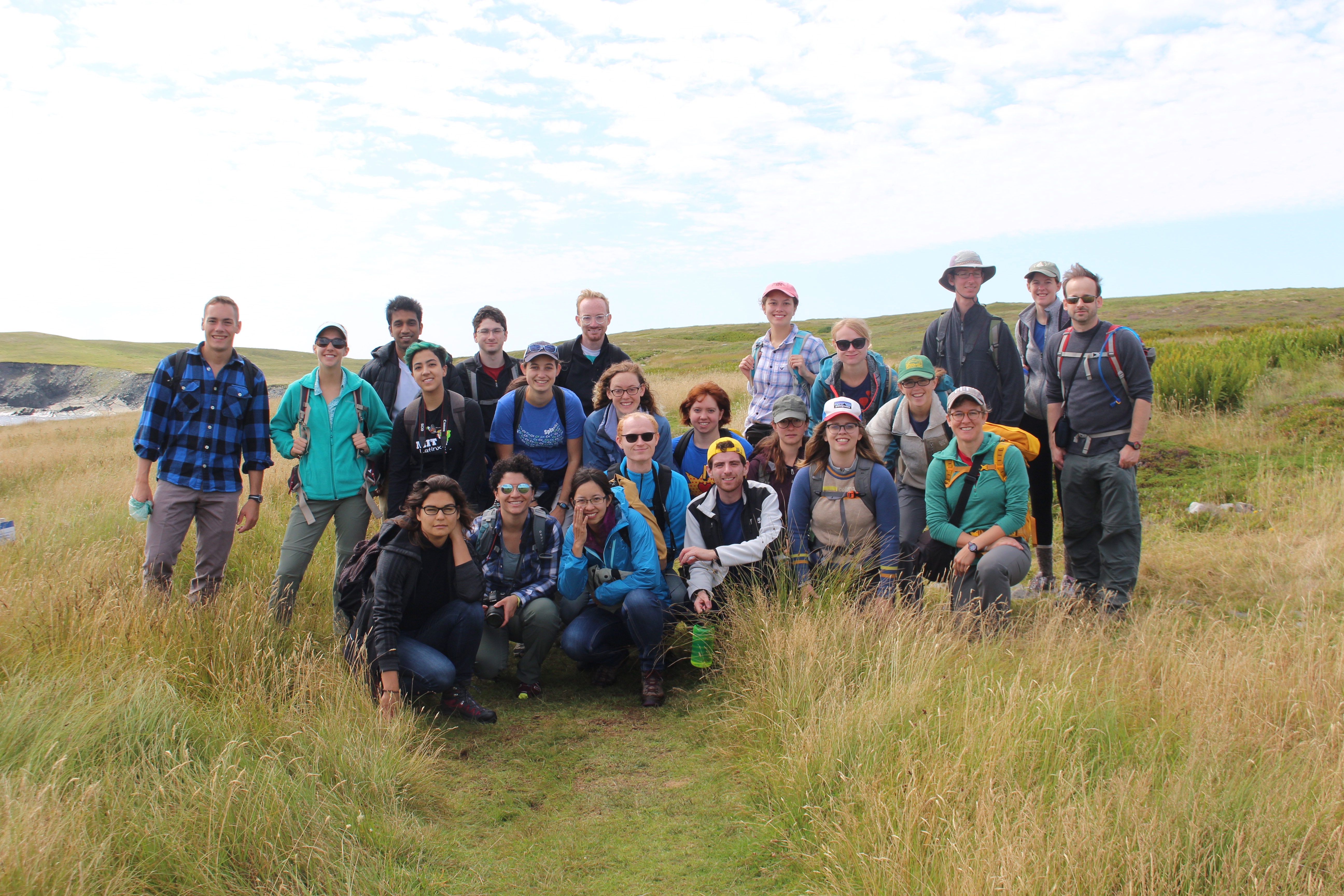 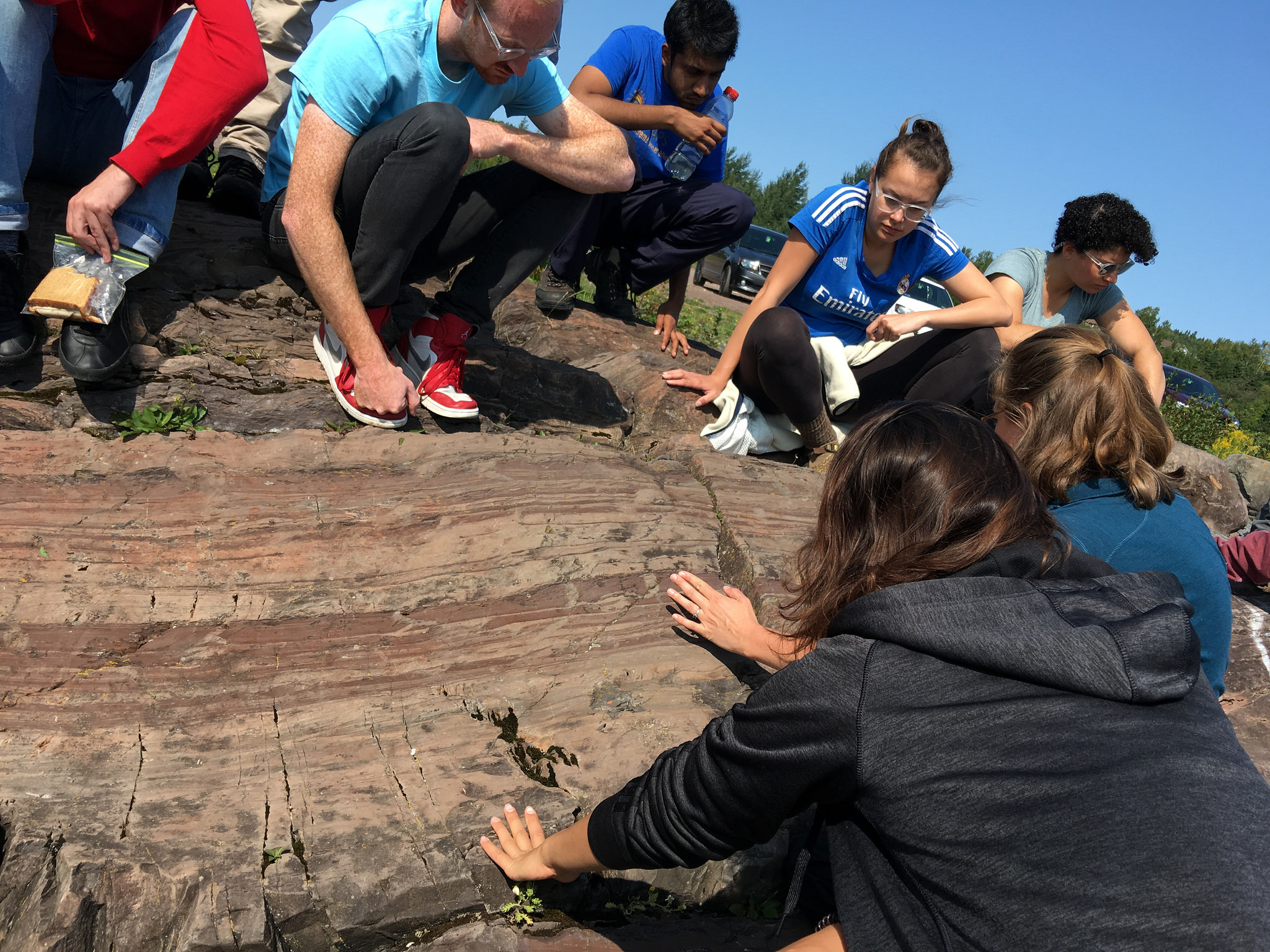 Thanks to their similar position on the margin of North America, Newfoundland shares much of the same tectonic history with New England. Some of the key geological events and tectonic terranes were very familiar to students on the trip from fieldwork closer to home, although as Bergmann explains “the rocks and exposures are slightly different, as can happen along a very long continental collision zone.” 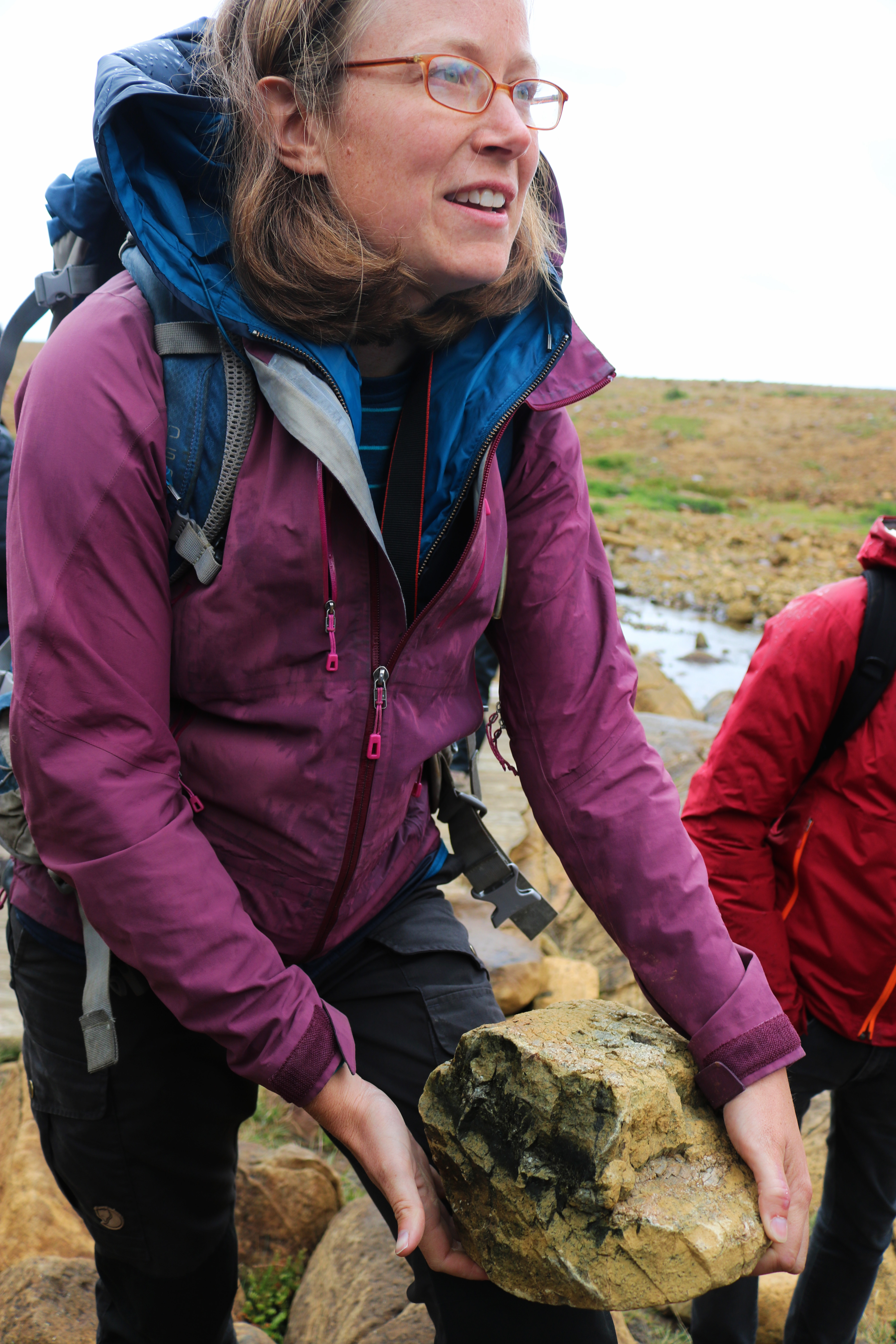 A particular highlight of the trip was the chance to see ophiolites and suture zones, the geologic records of past continental collisions. Bergmann explains, “When continents collide there are common rocks that get caught up in the collision -- like ophiolites which are formed when sections of the Earth's oceanic crust and the underlying upper mantle have been uplifted onto continental crustal rocks, and exposed above sea level. Newfoundland contains several suture zones, as a result of repeated collisions of continental fragments against North America. 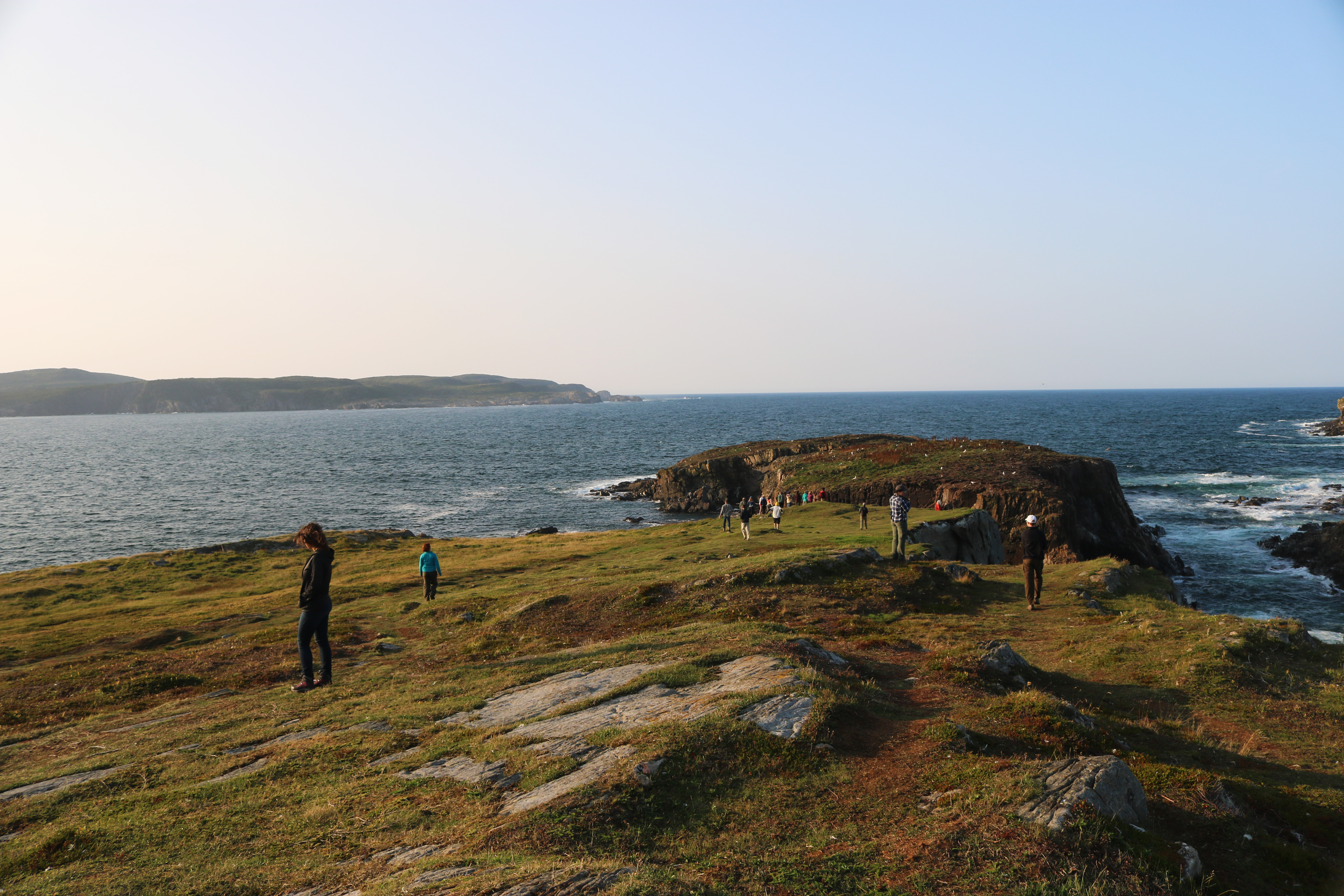 The group was fortunate to be able to visit Mistaken Point, a recently named UNESCO World Heritage Site home to the oldest known complex fossils in the world. The rugged coastal cliffs at Mistaken Point date to the Ediacaran Period (580-560 million years ago) and were formed in a deep marine setting offshore from the ancient continent of Avalonia. The fossils preserved there define a watershed in the history of life on earth: the first appearance of large, biologically complex organisms, after about three billion years of microbially dominated evolution.  “These soft bodied fossils are incredibly rare and unusual", says Bergmann. “They are preserved under ash-beds and capture the earliest diverse, macroscopic ecosystem of the deep ocean.” 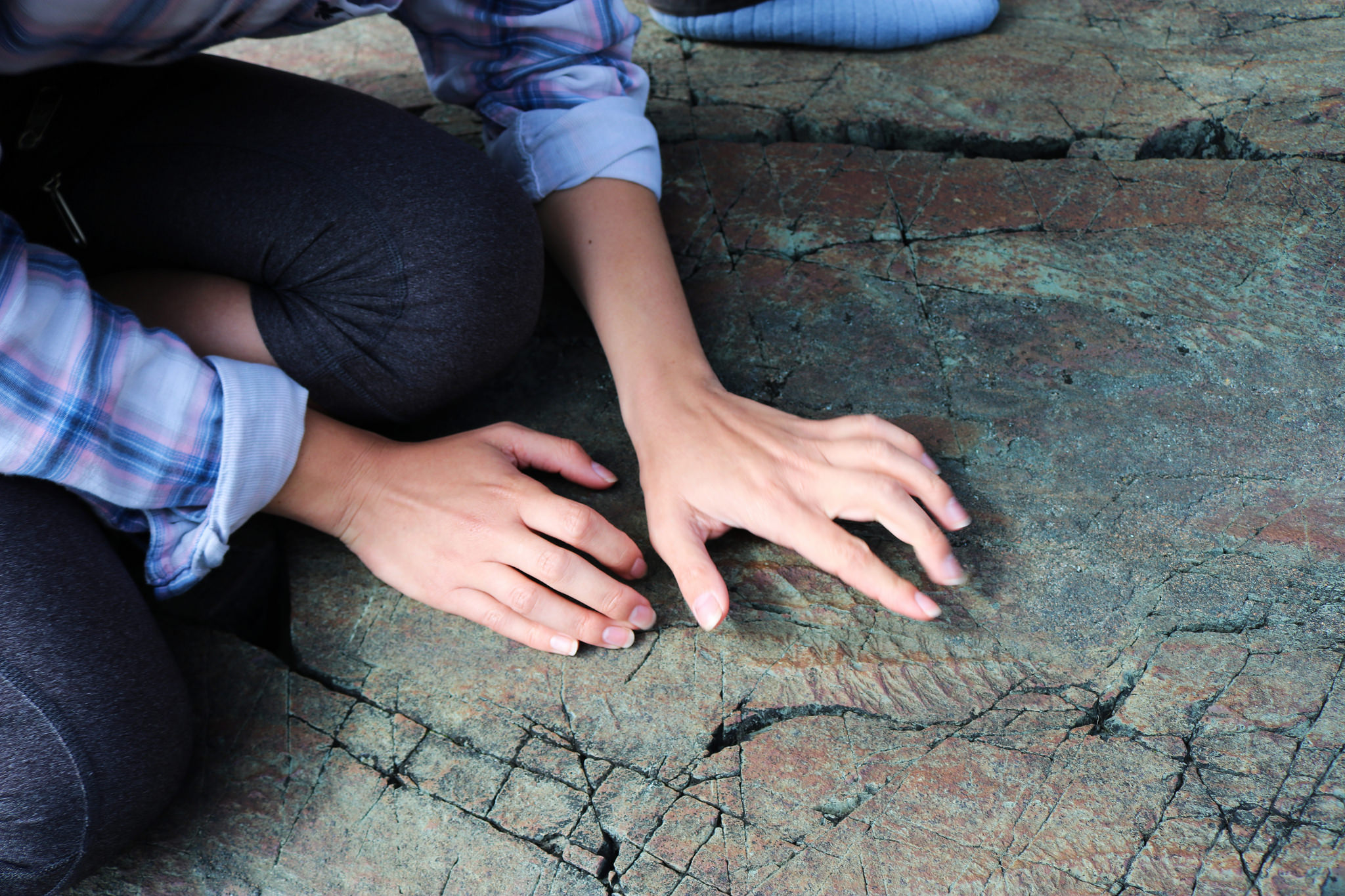 On a non-scientific note, by the end of the week nine trip participants had become honorary Newfoundlanders at a ceremony called a “screech in”. “Screech ins” vary but for the EAPS crew it involved eating "Newfie steak" (baloney), kissing a cod, and dancing with something called an ugly stick (a traditional Newfoundland musical instrument fashioned out of a household item or something from a tool shed, typically a mop handle with bottle caps, tin cans, or small bells), singing and reciting some Newfie speak. 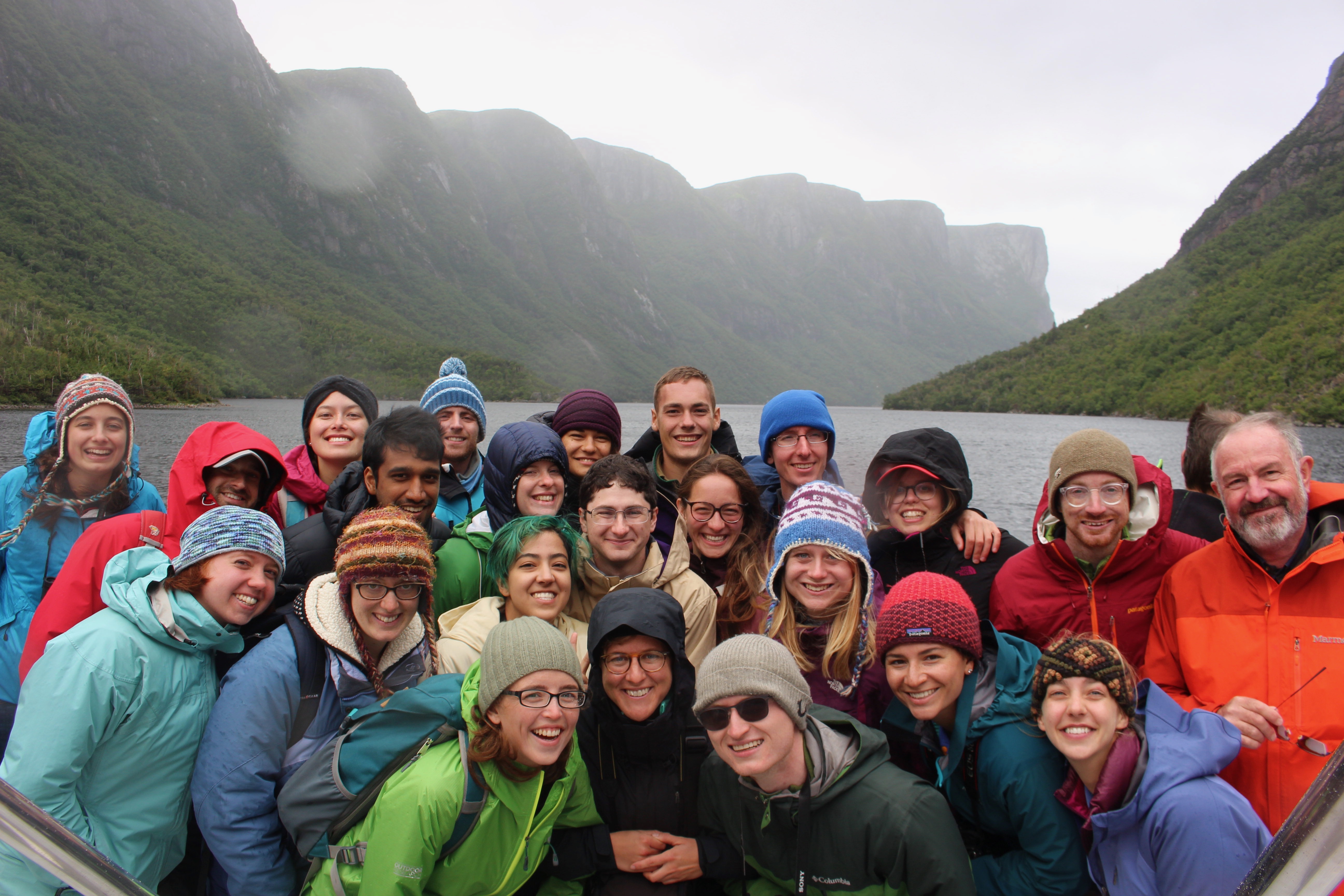 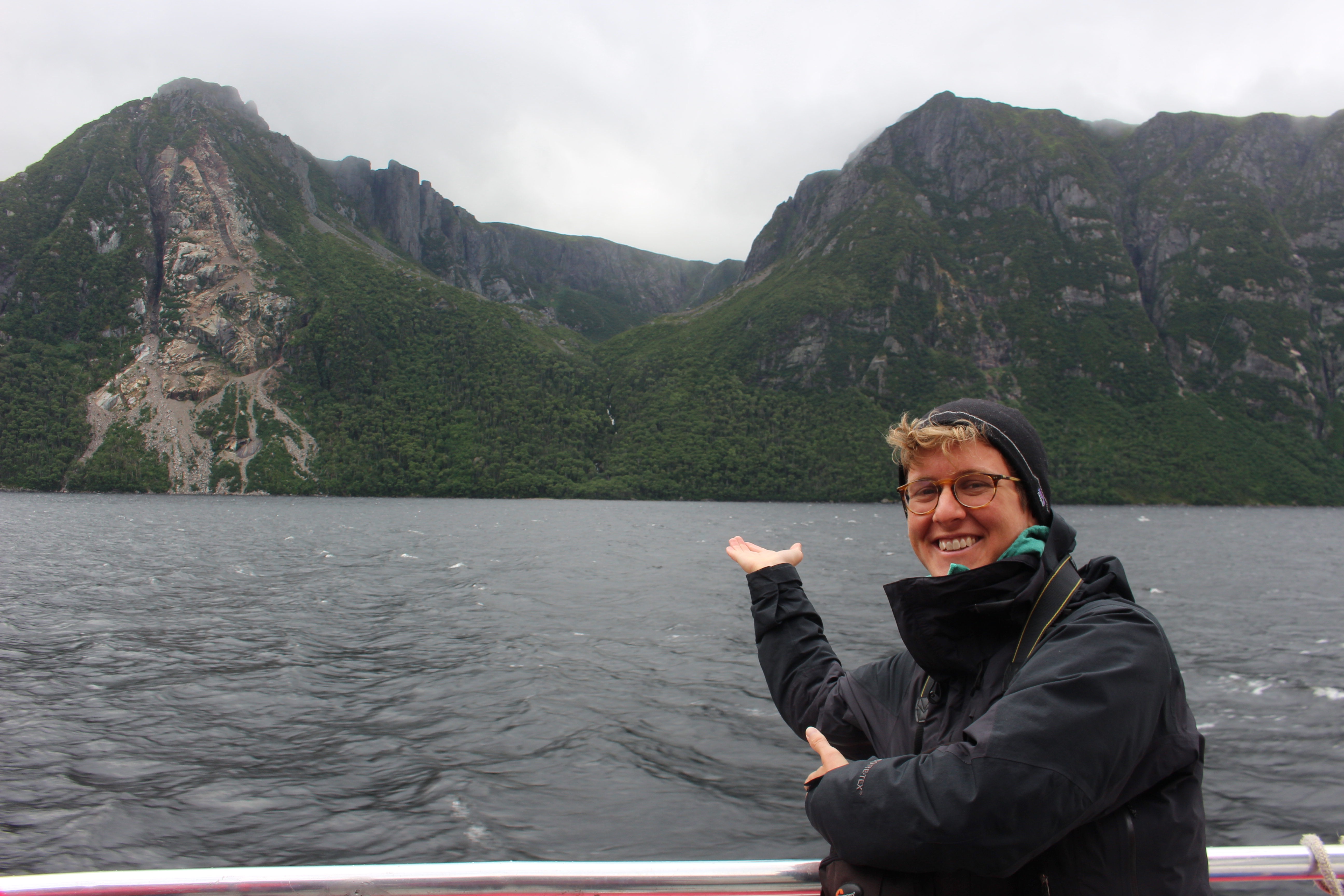 “Recent glacial sediments mark the extent of the Newfoundland Ice Sheet at the Last Glacial Maximum (LGM) across the island of Newfoundland. Deposited prior to the isostatic rebound following the LGM, some moraines originally deposited below sea level are now found tens of meters above sea level” says Laura Stevens PhD '17, seen here indicating another glacial feature, a hanging valley, at the western end of Western Brook Pond. 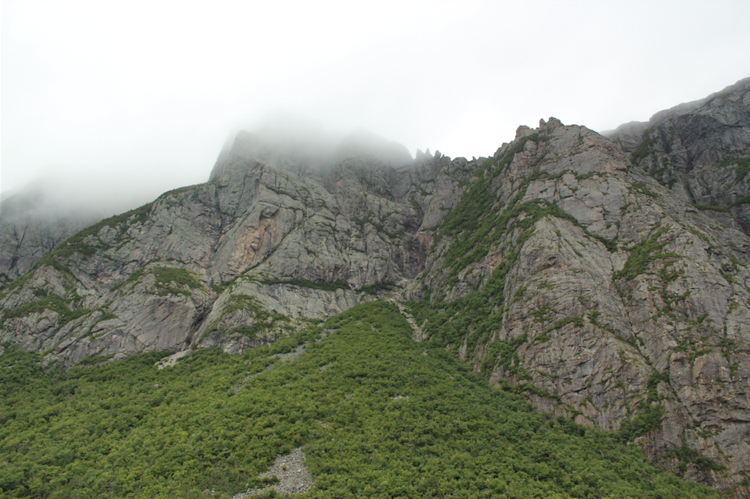 "The Long Range Inlier (seen here in a photo taken by Sam Goldburg) records the Grenville Orogeny, a period of mountain building one billion years ago," says Eva Golos. 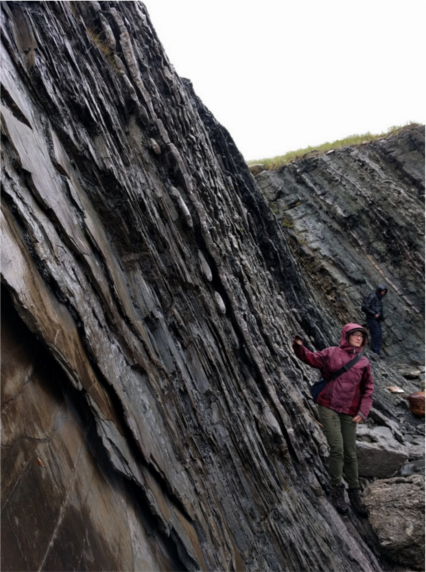 Jennifer Kenyon’s expert topic was the biostratigraphy of the Cambro-Ordovician GSSP. Kenyon says “We visited the Cambro-Ordovician GSSP (the physical point on Earth where we can observe the transition between these two periods). Students were able to go fossil hunting as they learned about the different species that defined this boundary (although it was a little too rough and windy to be successful). We also got to observe shale, limestone, and mudstone sequences that were in an overturned section, meaning that the older rocks appeared on top of the younger rocks.” Here we see Stephanie Brown with the Cambro-Ordovician GSSP behind her. 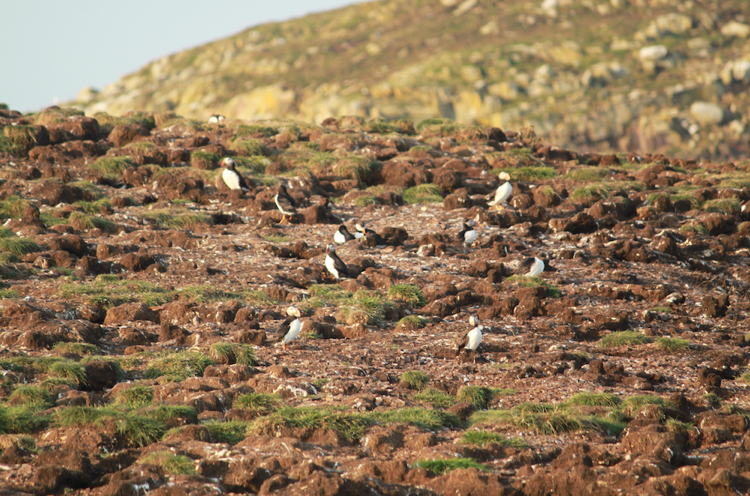 Elisa Boles (expert topic: Newfoundland ocean life) says, “We saw a colony of puffins nesting on the cliffs near Bonavista. The puffin is the provincial bird of Newfoundland, and while they spend most of their lives at sea, they return to nest in late summer, so we were quite lucky to be in the area at the same time they were. We spotted their orange beaks, which they use to attract their life-long mates, and watched them dive agilely into to ocean in pursuit of fish. We learned that if puffins eat too much, they sometimes can't take off, and have to wait several hours before flying again!” 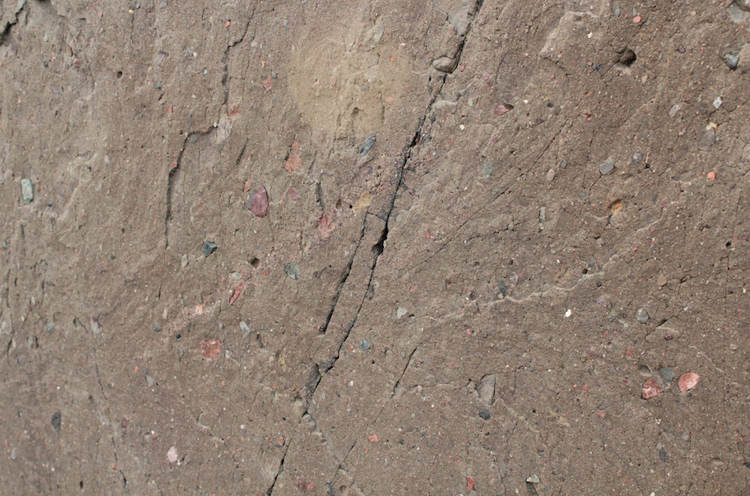 Julia Wilcots special topic was the Gaskiers and Ediacaran Stratigraphy. She says “The Gaskiers Formation of southeastern Newfoundland was deposited during a ~340,000 year period almost 580 million years ago when ancient Newfoundland — at that time located at a subtropical latitude — was covered in ice. This time is now referred to as the Gaskiers Glaciation. We observed almost 300 meters of diamictite (poorly-sorted sediments containing clasts of various sizes [seen here in a photo taken by Sam Goldberg] and dropstones and faceted clasts (signature features of glacial sediments). The Gaskiers Formation has been correlated to other formations both on Newfoundland and across the planet; we discussed the ongoing debate as to whether or not the Gaskiers Glaciation was globally synchronous and/or globally extensive.“ 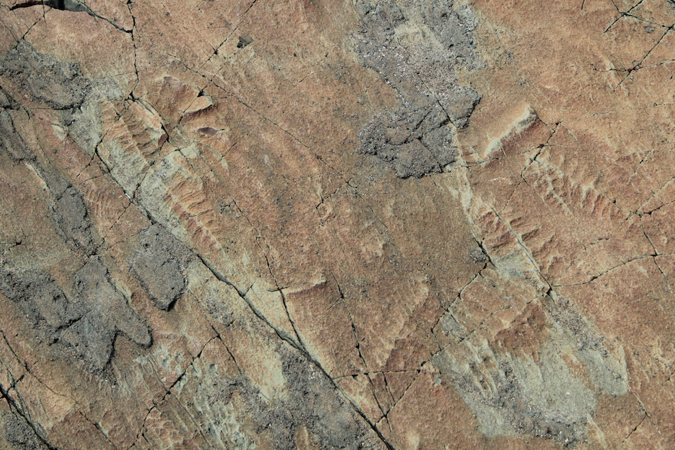 Ekaterina Bolotskaya, whose expert topic was Mistaken point fauna, says members of the trip saw “two surfaces with the fossils of the oldest large complex life-forms found anywhere on Earth (Ediacaran - 580-560 million years). The fossils [examples of which can be seen in the above photo taken by Sam Goldberg] were preserved by being buried by influxes of volcanic ash-rich sediment, containing zircon, which enabled geologists to accurately date them.” Bolotskaya explains “All the fossils at Mistaken point can be grouped into four categories: spindle-shaped (e.g. Fractofusus misrai, Fractofusus andersoni), leaf-shaped (e.g. Charniodiscus procerus, Charniodiscus spinosus, Charnia), round-lobate (e.g. Ivesia), and radiating (e.g. Bradgatia)." 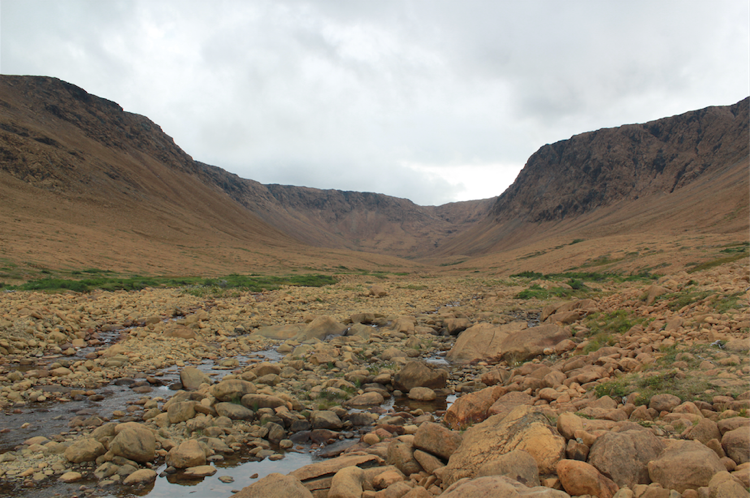 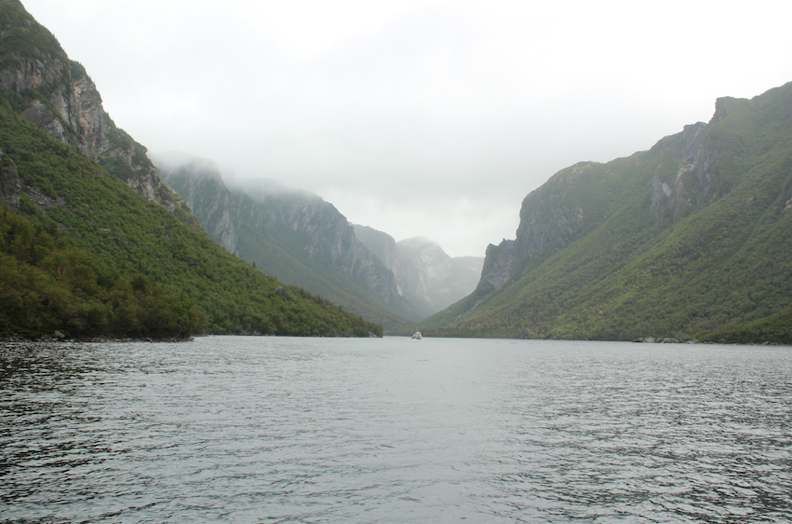 Mukund Gupta’s topic was the Pleistocene and Holocene climate of Newfoundland. He says “Throughout the trip, we saw evidence of the past presence of glaciers in Newfoundland. This was particularly evident during our boat ride with the characteristic U-shaped valleys and hanging valleys. We also experienced first hand the cool summer caused by the presence of the cold Labrador Current originating from the Arctic.”