Measuring Biological Dust in the Wind

A new technique developed in the Cziczo Lab may be the most accurate way of identifying biological aerosols from mineral dust in the atmosphere, constraining their contribution to cloud formation and climate change.

In the popular children’s story “Horton Hears a Who!”, Dr. Seuss tells of a gentle and protective elephant who stumbles upon a speck of dust, harboring a community of microscopic creatures called Whos living in a small town, Whoville. Throughout their journey together, Horton argues for the existence of Whos traveling around in the air on a dust speck, while doubters dispute the finding. Ultimately through observation, evidence for the organisms emerges, but regardless of the outcome, this speck altered a world greater than its own.

While this tale is a work of fiction, climate and atmospheric scientists have considered a real-life Whoville scenario – biological particles and inorganic material riding around in the atmosphere affecting the climate. Previous research has shown that some aerosols are very good at nucleating ice, which could form clouds in the troposphere. But due to complex atmospheric chemistries and little data, scientists aren’t sure what percentage of these ice active particles are biological in nature and abundant enough in the troposphere to have an impact on climate. Furthermore, chemically parsing the metaphorical Whos from their speck has proved difficult until now.

A technique developed by atmospheric science researchers in the Program in Atmospheres, Oceans and Climate (PAOC) in MIT’s Department of Earth, Atmospheric and Planetary Sciences (EAPS) has found a way to differentiate biological material in the atmosphere (bioaerosols) from non-biological particulates using machine learning with a higher accuracy than other methods. And when applied to previously-collected atmospheric samples and data, their findings support evidence that these bioaerosols globally, on average make up less than one percent of the particles in the upper troposphere--where they could influence cloud formation and by extension, the climate—and not around 25% and 50% as some previous research suggests.

Bioaerosols in a complex climate system

Bioaerosols, a subset of atmospheric aerosols, are biological particulates or liquid suspended in the air at any given time. These emissions consist of whole and fragmented airborne bacteria, fungal spores, yeast, viruses, pollens and other materials from the environment. Their solid, non-biological counterparts, inorganic aerosols, include materials such as mineral dust, like that from, apatite and monazite, and industrial combustion products like fly ash.

Scientists have long been interested in bioaerosols because of their potential to form Cirrus (ice) clouds, which have large implications for the climate-- reflecting, absorbing and transmitting sunlight as well as thermal infrared radiation from Earth. Bacteria like Pseudomonas syringae use their nucleating properties to form ice crystals on tomato plans and humans create artificial snow with them. While atmospheric and climate modeling suggests that bioaerosols, globally averaged, are not abundant and efficient enough at freezing to significantly influence cloud formation, research findings have varied significantly. “There has been a lot of debate recently—the last 5-7 years—about how much biological material is in the atmosphere,” said Cziczo. “[The study findings] are all over the map, but there are a cluster of studies that say it’s a few percent of the atmospheric aerosol and there’s a few studies that say it’s a lot, 25% or 50%. And so, those are sort of the two camps that have been out there, and you can imagine that these have really different effects on our climate system, on precipitation, on chemistry.”

Until now, gathering and positive identification of bioaerosols has been difficult. Measurement techniques specific to bioaerosol include filter collection coupled with electron microscopy or optical microscopy with fluorescent staining. Scientists have also used in-situ fluorescence with a wide-band integrated bioaerosol sensor (WIBS) in addition to measuring particles’ shape and size. The problem with this is that there can be interferences; bioaerosols are often found to have chemical signatures similar to smoke, an inorganic aerosol. Additionally researchers have tried culturing samples for microbial strains, as well as analyzing their data offline, in the lab. These techniques inject significant uncertainty into the measurements and some studies reported bioaerosol concentrations greater than the total aerosol measurement obtained, which is impossible.

In the case that this wasn’t complicated enough, aerosols become chemically and physically altered as they enter the troposphere, interacting with other atmospheric compounds, and the longer they are there before falling out, the more they age and mix. All of this varies by region, season, climate and altitude, which can affect measurements, further blurring the boundary between bioaerosols and inorganic aerosols, and making quantification challenging.

“One of the things that we suspected was that the previous ways of determining biological material probably over-counted [their abundance] because they were looking and characterizing other things as being biological that really weren’t,” said Cziczo. “Everything in the atmosphere is very highly processed. It’s what confounds a lot of these measurements,” Zawadowicz added.

So, in an effort to rein in the uncertainty surrounding bioaerosols in the atmosphere and constrain their influence on cloud formation processes, Cziczo and Zawadowicz, along with collaborators at NOAA, developed a technique that couples Particle Analysis by Laser Mass Spectrometry (PALMS) with machine learning. Here, single particle mass spectrometry (SPMS) is used to ablate and ionize aerosols one at a time, breaking them down into ion fragments and clusters, which are then detected by the instrument. Each aerosol analyzed this way produces a spectrum with identifiable features of its composition, like a chemical fingerprint.

The group leveraged the presence of phosphorus in the mass spectra to train the classification machine learning algorithm on known samples and then, primed, applied it to field data acquired from Desert Research Institute’s (DRI’s) Storm Peak Laboratory in Steamboat Springs, Colorado and from a Cool, California site during Carbonaceous Aerosol and Radiative Effects Study (CARES). “So, what Maria did was she grabbed a whole host of different particles, focusing on biological ones, bacteria, both in a living and dead state, fungal spores, pollen, yeast, just about anything you could imagine that could turn into an atmospheric particulate, and she found ways of dispersing these materials and then bringing them into the instrument so that we could see their composition.” Some particles were chemically aged to mimic atmospheric interactions, others, physically broken down so they were small enough to be analyzed, and nebulized.

Knowing that the principal atmospheric emissions of phosphorus are from mineral dust, combustion products, and biological particles, they exploited the presence of phosphate (PO-, PO2-, PO3-) and organic nitrogen ions (CN-, CNO-) and their characteristic ratios in known samples to classify the particles. In bioaerosols, phosphorus mostly occurs in phospholipid bilayers and nucleic acids, whereas in mineral dust like apatite and monazite, it’s found as in the form of calcium phosphate. But the division isn’t cut and dry; compounds like soil dust can include internal mixtures of biological and inorganic components.

Once analyzed, other spectral peaks and markers were used to provide additional evidence for the classification as biological or non-biological and increase the confidence in the algorithm and its results. “We found that if we do some ratios of certain components in the mass spectrum that there are certain clusters that form, and we employed some advanced statistical techniques to disentangle the clusters and see which signatures are biological and which aren’t,” said Zawadowicz. The new technique was able to accurately classify 97% of the spectra and when applied to spectra from field data, found that less than 1% was biological for the global average. Phosphorus emissions inventories helped to confirm this.

The unlikeliness of a real-life Whoville

While the list of bioaerosols tested and data sets used--which didn’t include locations and times of high and low bioaerosol concentration—were not exhaustive, the group found convincing evidence that, when it came to cirrus cloud formation, bioaerosols were an unlikely culprit. Previous research assumed that most of the phosphorus found in the atmosphere was biological, but Cziczo points out that this conflicts with phosphorus emissions inventories, implying that inorganic compounds were often mistaken for biological ones. For Cziczo this finding that bioaerosols accounted for less than 1% on average was the smoking gun. “It’s not enough to say that a particle is good at nucleating ice, it also has to have an abundance that causes that cloud formation to happen. And it looks much less certain now that we have enough of these biologicals to create the effect that some people have suggested in the literature,” Cziczo said. “Instead, it’s much more likely that there are other things that are causing the ice nucleation like the mineral dust particles.”

Even though Cziczo and Zawadowicz’s research has cast more shade over the existence of a “Whoville”, their work has just begun. “So now that we have an understanding of what it [the bioaerosol presence in the atmosphere] looks like and we have some field data to say how abundant it is in different seasons at different locations, the question is: are the models getting that correct?” said Cziczo, who has plans to collaborate with EAPS Senior Research Scientist Chien Wang and Prof Colette Heald (holder of a primary appointment in MIT's Department of Civil and Environmental Engineering with a joint appointment in EAPS,) who also investigate and model aerosol and climate impacts. “We’re going to be looking at working with them in the future and seeing if we can mesh all of this data—the laboratory data, the field data and the models together.” 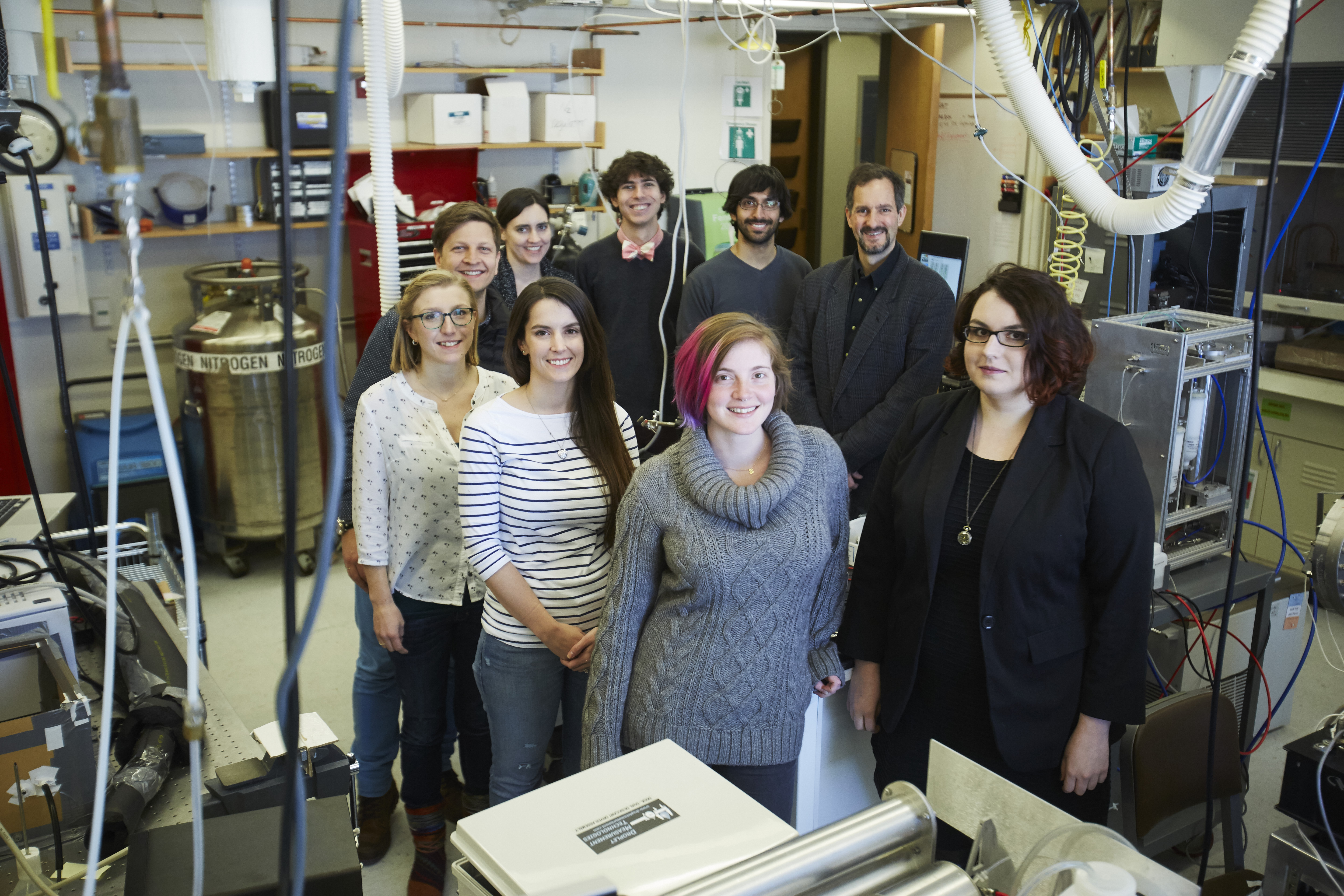 Cziczo's research group is interested in the interrelationship of particulate matter and cloud formation. His team utilizes laboratory and field studies to elucidate how small particles interact with water vapor to form droplets and ice crystals, which are important players in the Earth’s climate system. Experiments include using small cloud chambers in the laboratory to mimic atmospheric conditions that lead to cloud formation and observing clouds in situ from remote mountaintop sites or through the use of research aircraft.

William Martin gift to enable aerosol study at Mount Washington Observatory - Thanks to a recent gift from William J. Martin, the Cziczo group can now benefit from cloud and aerosol data collected from the summit of Mount Washington.

Putting the Science in Science Policy Oceans at MIT

The Science of Clouds and Climate Science for the Public