Scientists studying Earth's ancient oceans use a new method to measure ocean acidification and its effect on extinction events.

Read this story at EOS

Earth’s history is dotted with major mass extinction events from various natural disasters, including climate change. Fossil evidence shows a mass extinction at the end of the Triassic period, more than 200 million years ago, which killed off much of the planet’s marine life.

In the Lombardy Basin of northern Italy, for example, abundant marine fossils are embedded in the sediment layer that marks the end of the Triassic period, but above this, the same fossils are notably absent. Scientists theorize that the die-off was most likely caused by climate change that acidified the ocean.

In a new study, Jost et al. establish a new method for studying ancient geological oceans using carbon and calcium isotope measurements with numerical modeling to measure the consequences of ocean acidification in the geologic past.

The researchers collected samples from a 100-meter-thick limestone section in the Lombardy Basin spanning the Triassic and Jurassic boundary and measured the ratios of stable carbon (13C/12C) and calcium (44Ca/40Ca) isotopes in each layer. They found large negative carbon and calcium isotopic excursions—in other words, a shift toward greater relative abundance of the lighter isotope of each element—after the extinction event. This finding is consistent with an ocean acidification scenario, which could have caused the mass extinction.

Next, the authors simulated the ocean’s carbon and calcium cycles, injecting different carbon volumes into the model. The simulation scenarios were compared to the actual carbon data measured in the sediment layers. The coupled model revealed that ocean acidification was responsible for only 20% of the calcium isotopic changes. The remaining 80% were from local mechanisms, likely caused by an increase in aragonite, a form of calcium carbonate that was potentially favored in the wake of ocean acidification.

This novel method is relevant to geoscientists studying the global impacts of climate change, particularly, how much ocean acidification has played a role in extinction events. (Geochemistry, Geophysics, Geosystems, https://doi/10.1002/2016GC006724, 2017) 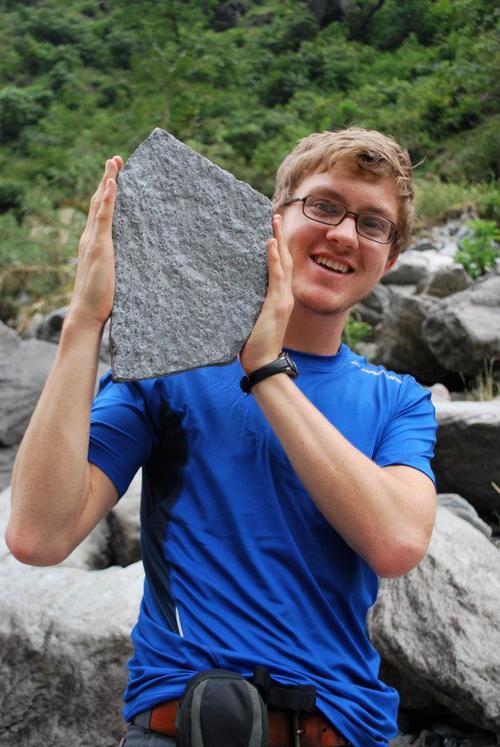 Adam Jost is a postdoctoral fellow working in Kristin Bergmann's Lab. His research focus is on using multiple geochemical proxies of seawater chemistry to investigate major environment events in Earth history and their effect on the biosphere which involves a combination of laboratory analyses, fieldwork, and computational modeling to develop a whole understanding of these events.

Jost says, "The chemistry of seawater has changed substantially over the history of Earth, and is deeply connected to the origin and evolution of life. To understand the conditions that are amenable or detrimental to life, we must interpret how environmental events in the past unfolded and affected seawater chemistry." MORE