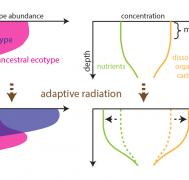 William Blake may have seen a world in a grain of sand, but for scientists at MIT the smallest of all photosynthetic bacteria holds clues to the evolution of entire ecosystems, and perhaps even the whole biosphere.

The key is a tiny bacterium called Prochlorococcus, which is the most abundant photosynthetic life form in the oceans. New research shows that this diminutive creature’s metabolism has evolved in a way that may have helped trigger the rise of other organisms, to form a more complex marine ecosystem. Its evolution may even have helped to drive global changes that made possible the development of Earth’s more complex organisms.

The research also suggests that the co-evolution of Prochlorococcus and its interdependent co-organisms can be seen as a microcosm of the metabolic processes that take place inside the cells of much more complex organisms.

The new analysis is published this week in the journal Proceedings of the National Academy of Sciences, in a paper by postdoc Rogier Braakman, Professor Michael Follows, and Institute Professor Sallie (Penny) Chisholm, who was part of the team that discovered this tiny organism and its outsized influence.

“We have all these different strains that have been isolated from all over the world’s oceans, that have different genomes and different genetic capacity, but they’re all one species by traditional measures,” Chisholm explains. “So there’s this extraordinary genetic diversity within this single species that allows it to dominate such vast swaths of the Earth’s oceans.”

Because Prochlorococcus is both so abundant and so well-studied, Braakman says it was an ideal subject for trying to figure out “within all this diversity, how do the metabolic networks change? What drives that, and what are the consequences of that?”

They found a great amount of variation in the bacteria’s “metabolic network,” which refers to the ways that materials and energy pass in and out of the organism, along its phylogeny. The fact that such significant changes have taken place over the course of Prochlorococcus evolution “tells you something quite dramatic,” he says, because these metabolic processes are so fundamental to the organism’s survival that “it’s like the engine of the system. So imagine trying to change the engine of your car while you’re driving. It’s not easily done, so if something is changing, it’s telling you something significant.”

The variations form a kind of layered structure, with more ancestral variants living deeper in the water column and more recent variants living near the surface. The team found that as Prochlorococcus started out living in the top layers of the ocean, where light is abundant but food is relatively scarce, it developed a higher and higher rate of metabolism. It took in more solar energy and used that to power a stronger uptake of scarce nutrients from the water — in effect, creating a more powerful vacuum cleaner but in the process also generating more waste, Braakman says.

As newer variants vacuumed up nutrients in the surface layers, more ancestral types had to move down to greater depths where nutrients levels remained higher, ultimately resulting in the layered structure seen today.

The carbon compounds that make up Prochlorococcus’ waste in turn provided nutrients that drove the evolution of another kind of bacteria, known as SAR11, whose own waste products were useful to Prochlorococcus, thus forming a cooperative system that benefited both organisms. The mutual recycling of waste reinforces the collective maximization of metabolic rate. “It looks like the system is in fact evolving to maximize the total throughput” of energy, not just that of individual organisms, Braakman says.

“As they optimize their ability to acquire nutrients, cells produce more organic carbon and end up promoting greater levels of mutualism,” Follows adds.

That interdependent, cooperative relationship is very similar to the relationship between mitochondria and chloroplasts, the two kinds of subunits that provide the energy inside the cells of all forms of plant life, Braakman says. Chloroplasts collect energy from sunlight and use it to form chemical compounds that transfer energy to mitochondria, which can in turn release and transfer carbon and energy back to chloroplasts and the rest of the cell — through pathways very similar to those used by Prochlorococcus and SAR11.

Other features of the two systems are also very similar, including their photosynthetic pigments and how they deal with the detoxification of hydrogen peroxide. This suggests parallel evolutionary processes produced the same outcome in very different environments. “Plant cells really look like microscopic ocean microbial ecosystems,” he explains.

Partly because of those parallels, Braakman says this dynamic could potentially describe the evolution of the biosphere more generally. He suggests that the mathematical descriptions of Prochlorococcus evolution, which he and Follows developed together, emerge from basic principles of kinetics and thermodynamics and so could provide some insights into other systems as well. “It could be a universal kind of dynamic,” he says.

“This framework can also help us model the interactions of life, sunlight, and ocean chemistry at the ocean scale,” Follows says.

The metabolic evolution of Prochlorococcus may have had one other important effect: Through a complex geochemical cycle involving the carbon compounds the microbe produced and their interactions with iron, the bacteria may have contributed to a significant rise in oxygen in Earth’s atmosphere around half a billion years ago, from very low levels up to near-modern levels. This major rise in oxygen is believed to have unleashed a rapid explosion of new species also known as the Cambrian explosion, which saw the birth of most major animal phyla.

What this analysis suggests, he says, “is what looks like a directional evolutionary process, which is steadily marching toward a direction where it’s increasing the energy flux through the system. One of the consequences of that is that then oxygen ended up rising in the atmosphere, and the complexity of the ecosystem increased.”

A lot of evolutionary theory emphasizes competition, Braakman says, where “there are limited resources and we’re all fighting for them. But what this evolutionary dynamic is saying is that it’s a way of increasing the resources for the whole system, so everyone is better off. It increases total system resources.”

This work, Chisholm says, demonstrates that “you really have to think about evolution at all these scales, to understand it. It’s not just about a bunch of selfish genes jumping around. If you want to understand life in all its dimensions, you have to look at the genes, but also all the way up to the ecosystems. None of it will make sense if you don’t look at it at all those scales.”

This team’s “innovative integration of phylogeny, physiology, and genomics opens up novel avenues for research on phytoplankton evolution, while stimulating new thinking about the long term coevolution of Earth and life,” says Andrew Knoll, professor of natural history at Harvard University, who was not connected with this research.

Ocean acidification may cause dramatic changes to phytoplankton | MIT news

An Ocean of Opportunity | MIT News