Classroom Earth: Drones Over the Desert

Over Spring Break, as the fieldwork component of her class 12.110B Sedimentary Environments, Prof Kristin Bergmann led a week-long trip to Death Valley, CA, innovating iPad-enabled drone technology to explore the Carrara Formation.

Bergmann was accompanied by Senior GIS (Geographic Information Systems) specialist Daniel Sheehan from the GIS Lab, part of MIT Libraries. Sheehan, an expert in GIS software, was responsible for helping to incorporate iPad enabled drone technology into the course. The spring 2017 trip marked the first time the MIT GIS Lab has used drones in this way.

Explaining her motivation for visiting the sites she chose Bergmann says "When my former PhD advisor John Grotzinger was a faculty member at MIT, he worked on a project looking at the variability of a particular unit in the Carrara Formation at a place called Eagle Mountain. At Eagle Mountain the unit captured a wide-range of depositional environments across a particularly short distance. I decided to take the class and drones back to the Carrara Formation to test how drones can help with mapping lateral changes in ancient environments. Among the questions we were asking were whether all of the carbonate units in the Carrara Formation are as variable laterally and whether two other sites show as much lateral variability as Eagle Mountain."

"The Carrara Formation is Cambrian-aged [540-490 Ma] and is an amazing mixture of early skeletal organisms including trilobites and echinoderms, microbial communities, ooids and siliciclastic rocks. You couldn't ask for a better formation to teach about ancient sedimentary environments and the transition in Earth History from a microbial world to a skeletal one," Bergmann enthuses. 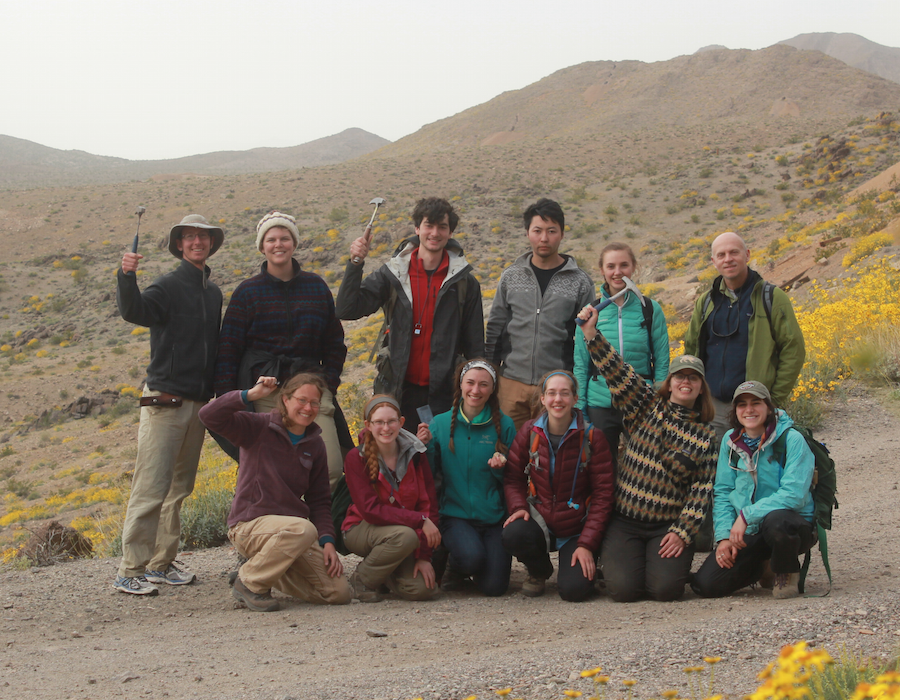 "Good coursework changes how you think about topics in a specific setting, while great coursework allows you to bring what you've learned to novel situations and view some aspect of the world in a new way," says trip participant Julia Middleton. "Fieldwork is the best example of great coursework, as it lets you develop new understanding as you interact with the world, thereby allowing you to experience your view of the world shifting before your very eyes." For Middleton, an MIT-WHOI Joint Program student in their Marine Geology and Geophysics program, spring 2017 in Death Valley marked her first land-based fieldwork experience, being more accustomed to ocean observing.

Makayla Betts, a first year graduate student working in Greg Fournier's geobiology group comments, "Sedimentary rocks are complicated. There were so many details and variations within the rocks that I did not know to appreciate before, and spending time picking out these changes across beds and outcrops helped me see the exciting challenge of putting together the ancient puzzle they provide."

Asked what the terrain they encountered was like, Betts replies, "At first, we would be checking out a mountainside from a distance and I would wonder 'how on Earth we were going to be able to measure it while not falling off?' But as we would get closer and start chunking away our work into sections, it became clear that every time, Kristin was careful to choose great sections that were both well exposed and accessible. And of course, the drone was able to go where we could not to track laterally." 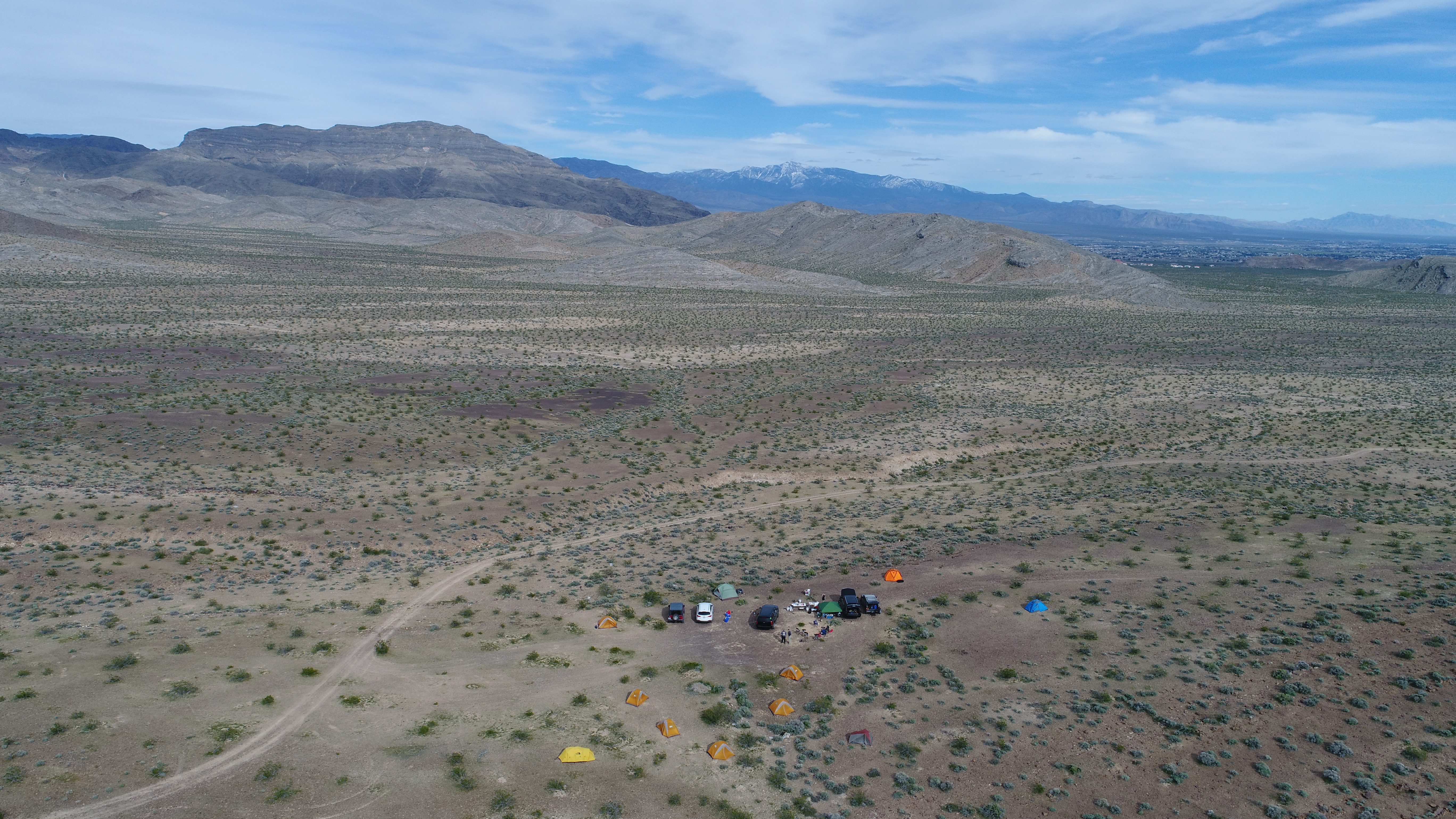 Sheehan, who obtained FAA certification shortly before the trip, served as the pilot-in-charge of drone operations while Cantine operated the controller. Cantine intends to get certified as a pilot-in-charge and Sheehan had facilitated flight training at Hanscom AFB and Haystack Observatory prior to the trip. In addition to managing the drone flights, Sheehan led in the processing of the data on the trip and is helping with the processing back on campus. He also helped with class sessions in the GIS Lab. These session focused on using GIS and editing the data the students collected and demonstrated software to create 3D photo reconstructions from the photos they took from the drone. 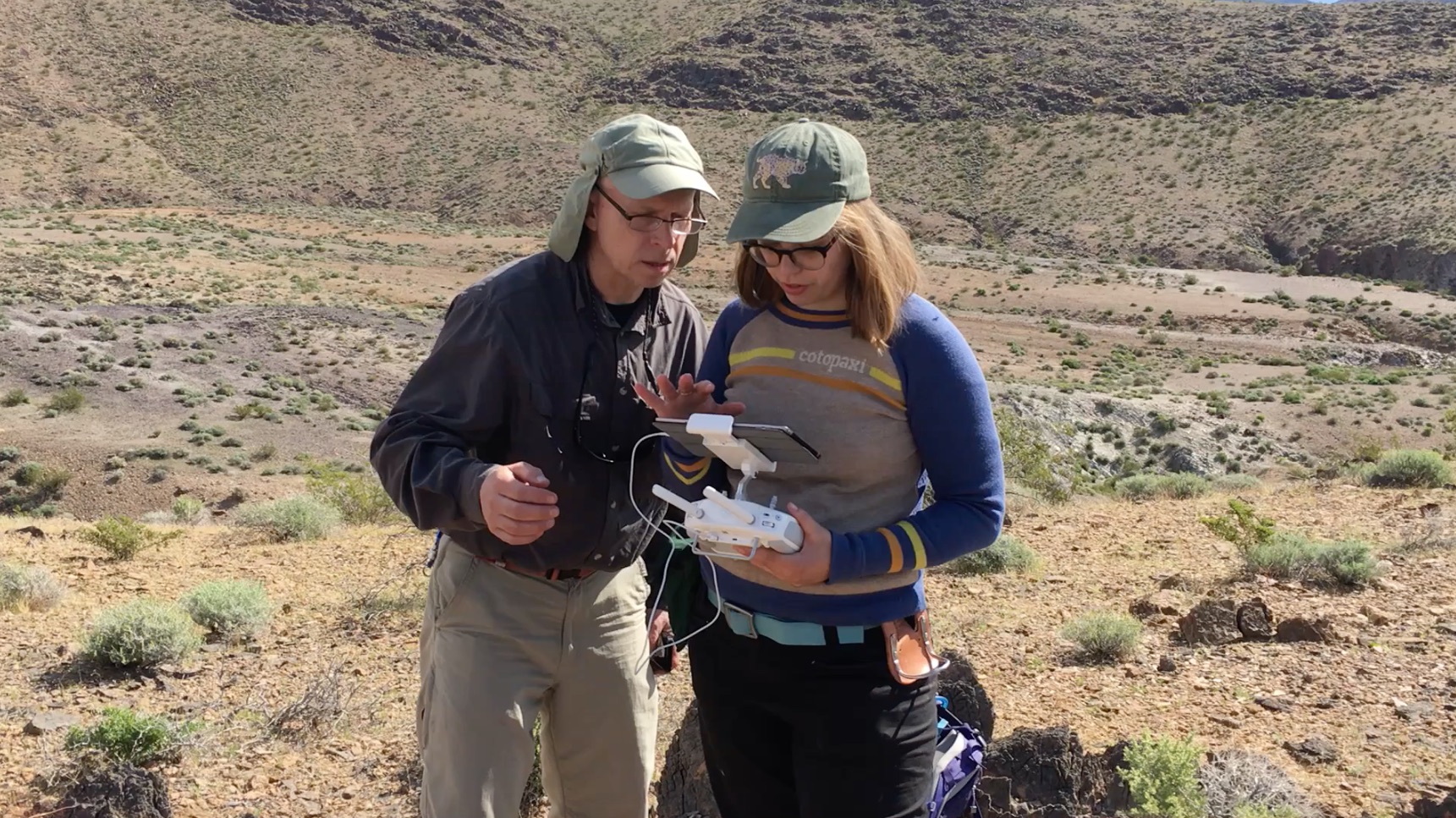 "The drone (or small UAS – Unmanned Aerial System): we used DJI Phathom 4 Pro drones. These are commercially available drones with a high resolution camera and with a safe flying time of 20 minutes per battery (30 minutes total). We used the drones to photograph the surface, initially for orthophotos (the kind you see in Google Maps) and later for 3D photo reconstructions. We changed during the trip because it became clear that the steep terrain, along with current flight planning software, made it difficult to fly for orthophotos. A second reason is that orthophotos are less useful for mapping steep beds where there may be 10 meters of a unit visible from the side but only 1 to 2 meters from the orthophoto perspective. The resulting 3D reconstructions show the terrain much as the students experienced it. After image processing, the students were able to add the data they collected on the iPads to the maps, both in GIS and in Lime, a 3D editing software developed for annotating rock outcrops." Sheehan explains.

When asked if he thought it went well, Sheehan says yes "although initially it was a disappointment that we couldn’t also fly for orthophotos." He says, "We had about two hours of battery life per day (charging the drone batteries is time consuming so we could use only a single charge on each per day). Despite the high wind we experienced (this drone can’t fly in winds higher than 20 MPH), we managed to fly for about two hours each day and have a wealth of photos to process. Initial processing has been successful if a bit of a learning experience.  A big part of the MIT Libraries interest in this is adding the drone data we collected to the MIT Libraries collections and making then openly accessible around the world.  The Libraries’ drone project is being funded by the MIT Libraries’ Experimental Collection fund - https://libraries.mit.edu/news/bibliotech/ordinary. We are ready to store the orthophotos and the Digital Elevation Model (DEM) that was made with the orthophotos but adding the 3D reconstructions to our collection will be more of a challenge." 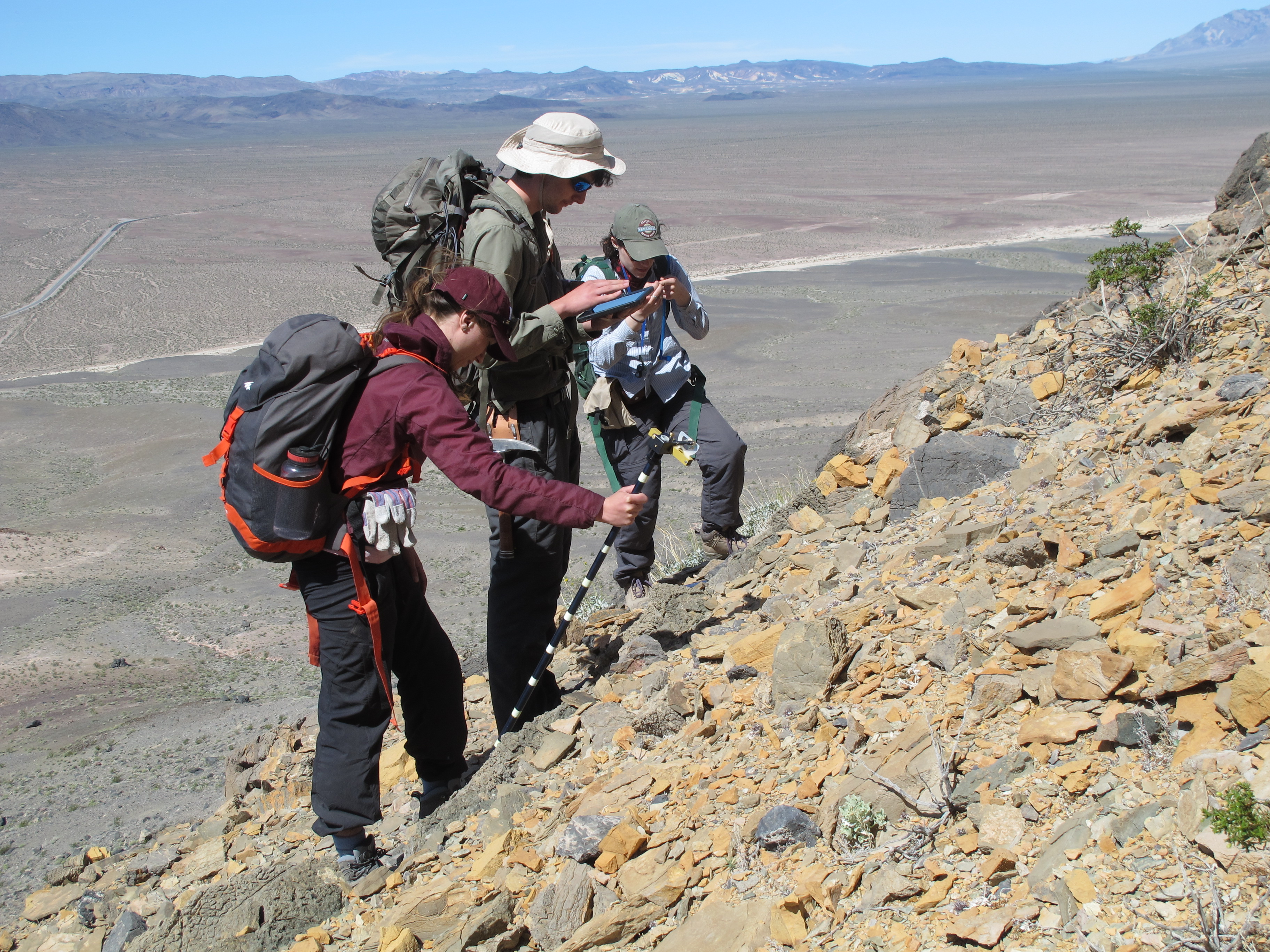 Of this new technology, Betts adds, "Using the iPads to catalogue sections was useful, albeit a bit of a learning curve. With this technology, we were able to easily organize our thoughts and keep consistent note-taking across days and sections. As someone without previous experience doing this kind of work, it was helpful to be prompted for certain kinds of observations about the rocks. Coming back with drone data was awesome - we are now at the stage of combining the photographs taken by the drone with our observations on the ground, and it is impressive to see how this approach can be used to understand large landscapes."

Asked what she thought about using technology in the field Betts reflects, "You're not only identifying sedimentary beds, discovering microbial fossils, and noting anomalous outcrops, you're compiling all you see into an accessible form (so that when you look back at your field notes from the comfort of your desk you can walk back through the terrain). Integrating all the data as it came into your head was the most natural thing in the world. Rather than looking back over disjointed notes scrawled in the margins of a strat[ification] column and trying to combine your thoughts after the fact, the use of sedimentology-specfic iPad apps allowed us to collate on the go."

"And yes," says Bergmann. "The flowers were amazing. In fifteen years of going out to the Death Valley area, I've never seen them like that. The hillsides were covered in vibrant yellow, purple and pink flowers and even grass. The prickly pear cacti (my favorite desert flower) were all blooming."

Bergmann leads a trip to Newfoundland in August 2017 with priority being given to undergraduate students. An organizational meeting was held on May 2. For more information contact Kristin Bergmann.

Kristin Bergmann applies sedimentology and stratigraphy, stable isotope geochemistry of carbonates including clumped isotope thermometry, and geobiology to reconstruct the record of environmental change from observations of sedimentary rocks spanning the Precambrian (before the time complex animals with mineralized skeletal remains appear in the fossil record) and the end Ordovician (when the so-called Ordovician-Silurian extinction event brought to an end the tremendous expansion of life during the Ordovician Era.)

To date Bergmann's work has focused on marine carbonate sedimentary rocks and fossils from sites that include locations in the United States, Oman, and Svalbard. She analyzes the rocks using a variety of tools in order to better understand how the chemistry and climate of the oceans and atmosphere affected the evolution of complex life, from unicellular microbial communities to multicellular animal communities. Her research has multiple important components including placing constraints on the environmental change that provides a backdrop for early evolution but also quantifying the range of climatic conditions the earth system is capable of.