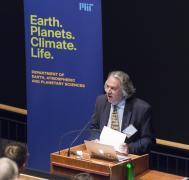 A Brief History of Environmental Successes

The headlines are full of bad news about the environment but Solomon thinks it’s important to celebrate and learn from past successes as we think about today's environmental challenges. "We don't have a perfect record certainly, but we have done a lot of things remarkably well," Solomon began. "Lots of issues have been managed rather than solved, but our performance is still one to really celebrate and above all to learn from."

Solomon, who joined MIT in 2012 after 30 years as a scientist working at NOAA, began her career on research identifying the chemistry responsible for the ozone hole over Antarctica, work that laid the foundation for what became arguably the signature environmental success story of the twentieth century. As she recalled, in that case, even back when the predictions pointed to problems "far in the future" and while it was still "only a theory", concerns over ozone depletion were taken seriously not only by scientists but also by the public.

So why then should global warming, the defining environmental issue of our time, be any different? Solomon sees three "P"s generally involved in taking action to successfully combat an environmental problem:

Is the issue Perceptible?
Is it Personal?
Are the solutions understood to be Practical?

In the case of the Antarctic ozone hole the data was clear. There was something a little bit exotic and compelling about Antarctica that Solomon credits with likely having raised public interest, but perhaps more importantly, the science story was an easy one to tell, with unequivocal data and satellite maps of the hole that were readily understood.

Ozone damage, because it impacts human health so directly, is a deeply personal issue. Without ozone to absorb damaging ultra violet light, people faced not only the increased risk of a faster sunburn, but the much more serious personal risk of developing skin cancer.

And then there were the plethora of practical solutions that were found, and which Solomon shared, from switching away from aerosol product delivery to replacing chlorofluorocarbons with their much less reactive hydrochlorofluorocarbon cousins in refrigeration and air conditioning.

Strongly linked to her three Ps, Solomon also emphasized the inevitable delicate accompanying "ballet" that has to play out between the public, the perception of the problem, the science, the politics, industry and technology, each interacting in different ways depending on the issue.

In the case of stratospheric ozone, nations around the world got together in 1987 to adopt the Montreal Protocol with the goal of first freezing and then phasing out chlorofluorocarbon emissions. The result has been spectacular enabling us to avoid a global ozone hole with all that would have meant, but as Solomon pointed out, the tide turned more than a decade earlier, not because of either regulation or theories explaining the hole in large part because many American consumers (Solomon referred to them as `We the People’) turned `good business into bad business’, being willing to go to their medicine cabinets and making the switch from spray deodorant to a roll-on one, at the time, putting the US’s response ahead of Europe’s.

Pivoting from the problem of `good’ ozone in the stratosphere to the problem of `bad’ ozone (the kind responsible for photochemical smog at ground level), Solomon compared smog’s three Ps; and the public, scientific, political, industrial and technological ballet involved in that case. Smog was (and, as in e.g. Beijing today, is) clearly perceptible. You can see it. If you are in it, you can sometimes taste it. It also increases the incidence of asthma, and is particularly harmful to the developing lungs of small children making its effects, again, strongly personal.

As to practical solutions, Solomon said that in the US once the science had been done to understand what was causing the problem, innovation exploded with tremendous advances such as in “positive crank case ventilation to keep the excess hydrocarbon from escaping out of your engine” and “catalytic converters to transform the effluents coming out of your tailpipe to things that would be unreactive and not make smog."

The Clean Air Act which resulted was passed by Congress in a today perhaps unimaginable vote of 73 to nothing. How did it attract such strong support? Public opinion and public engagement, said Solomon. “It was personal, it was perceptible but social movements are also incredibly important.” The first Earth Day in 1970 drew an estimated turn out of 20 million people nationwide. The counter culture, Rachel Carson’s book Silent Spring, all these Solomon said spoke to and reinforced a prevailing sentiment of “Is this the way to live?” Quoting part of Richard Nixon’s 1970 State of the Union address Solomon pointed to how public engagement had, unlikely as it might seem now, translated into a political response to drive change.

As Solomon noted, there was even an important co-benefit in the need to remove lead from gasoline to prevent damage to catalytic converters needed to clean up car exhaust: an example of one environmental solution unintentionally creating another. A more recent example is taking place in China, a country already seeing a tremendous increase in electric car sales, where it was announced recently that one in five new cars sold would have to use an alternative fuel by 2025.

Having quickly walked the audience through the canonical evidence for global warming, Solomon finally turned her attention to an assessment of the state of its three Ps.

Solomon is confident the effects of global warming are becoming increasingly perceptible thanks in part to extensive and ever longer high quality global temperature records, however, for New Englanders living away from the coast it may not yet feel deeply personal.

Solomon sees several factors conspiring: besides being a classic "future problem", perceptions of climate change depend highly on where you live. If you live on the coast your experience of sea level rise may be very personal but if you live in the West, your issue may be fires. The natural variability of the local climate is such that the trend in temperature and everything related to it may still not YET be immediately perceptible where YOU are.

In terms of practical solutions, global warming is also inexorably connected with a world economy built on the back of fossil fuels. It connects to installed infrastructure, both our own (like our beloved cars and our houses with planned lifetimes of 10 and 50 years), but also infrastructure in which industry has made massive investments.  “We have to be realistic about that [industry seeking to recoup their investment].” She said, “Added to which it’s also a mineral rights issue. Companies owning rights to coal, gas and oil necessarily want to realize that value.”

Solomon finished by touching on the moral and ethical dimension of the problem. Comparing per person emissions numbers across the globe, Solomon reminded her audience that “on average, if you take the six and a half billion people that are now in the developing world, they emit about 5 times less fossil carbon per person than the other one billion in the developed world. What about their future? If they develop using fossil energy to fuel that development the same way we did, this planet’s going to get very, very hot indeed, as much as 10 degrees Fahrenheit hotter by 2100. So what about those people’s future? What’s fair?”

In the end, however, Solomon says she’s optimistic because of global increases in the amount of installed non-fossil power in the past few years, and increasing commitments to low-carbon or zero-emission vehicles by many countries.

Although the US must decide what role we as a nation are going to play, Solomon notes other countries continue to move forward. “We’ll see what happens: This is a 100-year problem, it’s not a 4-year problem,” she said. In closing Solomon reflected that global warming is by far the toughest thing we have ever faced but that she thinks it’s clear that the mix of science, public engagement, innovation, the ballet, her 3Ps, and wise weighing of social and ethical choices, are leading us to the means of managing our planet’s atmosphere.

Following the lecture, John Carlson welcomed EAPS alumni, friends, faculty and students to a private dinner in the Harborview Cafe, with a special greeting for Nancy Lorenz, daughter of the late Professor Ed Lorenz. Carlson also thanked Professor Solomon for her inspiring talk, and spoke about his 7 years as a graduate student at MIT in meteorology. Department Head Robert van der Hilst warmly thanked John Carlson and those who have supported EAPS climate research, and encouraged others to consider supporting the Lorenz Center or an EAPS graduate fellow in climate science.

Established in 2011, the Lorenz Center’s annual John Carlson Lecture at the New England Aquarium communicates exciting new results in climate science to the general public. The lecture series was endowed by EAPS Visiting Committee member John H. Carlson through a generous gift to the Lorenz Center in the Department of Earth, Atmospheric and Planetary Sciences. Past lectures have included topics ranging from climate dynamics, to the inherently chaotic behavior of the climate, to the scientifically puzzling relationship between clouds and climate; and what glaciology can teach us about climate change.

The Lorenz Center in the Department of Earth, Atmospheric and Planetary Sciences at MIT is devoted to learning how climate works. Named after the late MIT meteorologist Edward N. Lorenz, a pioneer of chaos theory, the Center fosters creative approaches to increasing fundamental understanding.

Susan Solomon is internationally recognized as a leader in atmospheric science, particularly for her insights in explaining the cause of the Antarctic ozone "hole". She and her colleagues have also made important contributions to understanding chemistry/climate coupling, including leading research on the irreversibility of global warming linked to anthropogenic carbon dioxide emissions, and on the influence of the ozone hole on the climate of the southern hemisphere. Her current research focuses on both atmospheric chemistry and climate change.