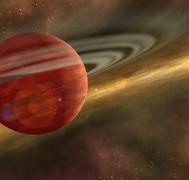 The Planet Hunter Searching for Another Earth

MIT astrophysicist Sara Seager has been looking at planets beyond our solar system, known as exoplanets, for almost 20 years and is confident she'll soon find another Earth -- maybe hosting life.

Read this story at CNN Tech

"I want to find another Earth. That's what I'm living for."

MIT astrophysicist Sara Seager has been looking at planets beyond our solar system, known as exoplanets, for almost 20 years.

When the first ones were discovered in the 1990s, many questioned the finding and didn't think it was real. But since then, with better technology, we have observed more than 6,000 of them, most of which are giant balls of gas.

With so many planets now coming out of hiding, the race is on to identify one that resembles Earth: a rocky world with liquid water just like ours, and suitable to host life.

Seager believes she knows how to make that discovery.

It's not easy to see exoplanets as you can't just look at them through a telescope. This is due to the blinding light coming from their host stars, which can be very different in size and features compared to our sun. The process is often described as trying to spot a firefly circling a lighthouse, from thousands of miles away.

The first ones were discovered indirectly, in 1995, by just looking at stars to see if they would wobble slightly, responding to the pull of another object's gravity.

At this time, Seager was a graduate student at Harvard searching for a topic for her Ph.D. and she was intrigued by the newborn field of faraway planets.

"Since the planets were discovered indirectly, most people didn't believe that the discoveries were real. They'd say to me 'Why are you doing this? These aren't planets!'," says Seager.

The contrarians weren't entirely wrong: the wobble can be caused by other factors such as another star and several planet discoveries have been retracted over time for this reason.

But then a different technique was found to make their hunt easier, called transit. This is when a planet moves in front of its host star and causes the star's light to dim slightly.

"One of the planets from the wobble technique showed transit: it went in front of the star at exactly the time it was predicted to and that was basically incontrovertible," says Seager.

Seager did not want to simply look for distant planets. She set her sights on something more specific -- their atmosphere. She was the first person to do so.

"Atmospheres are important because they're a way to look for signs of life: we look at gases that don't belong and may have been produced by some life form," she explains.

But if seeing an exoplanet is already difficult, how do you observe an atmosphere? For this purpose the light from the star can come in handy. "When a planet transits in front of its star, we can very carefully analyze the atmosphere's composition, thanks to the light of the star shining through it," says Seager.

The process becomes similar to looking at a rainbow.

"If you look at a rainbow very closely, you see tiny little dark lines between the colors, pieces that are missing. Those lines are there because Earth's atmosphere is taking away some of the light."

The dark lines are like fingerprints for specific gases and special tools can decode which ones are there. In 1999, Seager suggested that one particular element, sodium, should leave a detectable fingerprint.

"It's like skunk spray: a tiny bit of sodium can make a very big signature," she says. 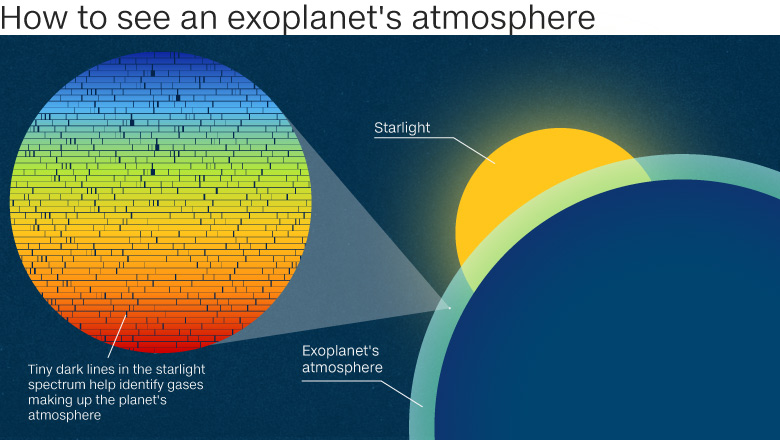 Sodium was found in the atmosphere of a "Hot Jupiter," the name given to the first exoplanets ever discovered. These are huge spheres of gas many times larger than Earth -- like our Jupiter -- orbiting dangerously close to their stars, making them very hot.

Because of their size, Hot Jupiters are the easiest exoplanets to spot, and hundreds have been found to date. But as they don't have a solid surface, they are nothing like Earth.

To find life, we need small, rocky planets -- like ours.

Compared to finding "Hot Jupiters", searching for rocky planets is far more difficult, mainly because of their smaller size. And when spotting gases, it's not sodium we're after.

"The number one thing we want to see in a planet's atmosphere is water vapor," says Seager.

We see water vapour in some of the giant planets, like Jupiter, as they have it naturally within their atmosphere. "We have not seen that yet in a rocky planet."

Detecting water vapor on a rocky planet would be the tell-tale sign of a liquid ocean, and therefore the potential for life. "All life on Earth needs water, and we believe that all life needs a liquid," says Seager.

The need for liquid to create life is theorized due to the chemistry of molecules, as they require liquids to react and reform into other things -- such as lifeforms. "Water is simply the most abundant liquid out there," says Seager.

For a planet to have liquid water, some basic conditions must be met. The planet must be such that its surface temperature is not too hot -- or water will boil away -- and not too cold -- or it will freeze into ice. This all depends on its distance from the parent star: either too close, or too far.

Astronomers call this sweet spot the "Goldilocks zone," from the children's tale "The Three Bears," in which young Goldilocks likes her porridge "Not too cold, not too hot, but just right." 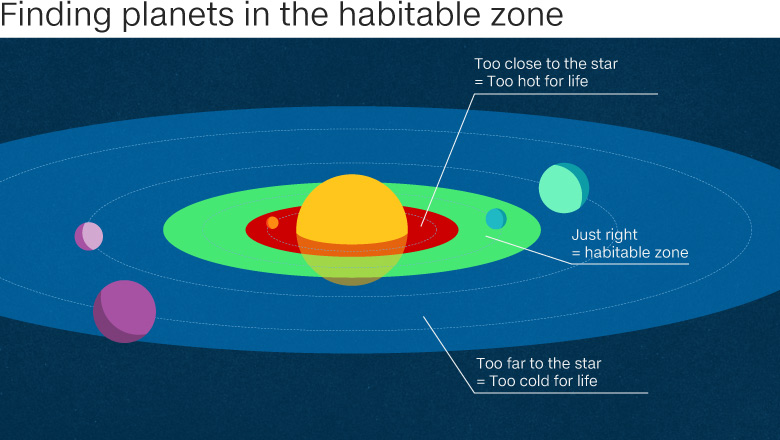 These planets are not rare, but the challenge in spotting them can make it seem that way.

"As many as one in five stars like the sun could have a planet with liquid water. And even though this number could be wrong, as things change quickly, we know for sure that small rocky planets are not rare," says Seager.

There may be billions of Earth-like planets in our galaxy alone.

Out of the 6,000 planets discovered so far, approximately 2,000 have been confirmed to be actual planets -- work is underway on the rest -- but only about 30 are considered potentially habitable.

In 2014, NASA found the first Earth-sized planet orbiting a star in the habitable zone. This was named Kepler-186f -- after the Kepler space telescope, used to spot it -- and is about 500 light-years away in the constellation Cygnus, the galactic equivalent of our neighbourhood since the Milky Way is about 100,000 light years across. This planet is 10% larger than Earth.

Described by NASA as "a significant step toward finding worlds like our planet Earth," Kepler-186f orbits around a type of common star known as a red dwarf, which is about half the size of our sun.

Then, in 2015, astronomers found the first Earth-like planet orbiting a star just like our sun, called Kepler-452b. This was dubbed Earth's "bigger, older cousin," as the planet is 60% larger than Earth and completes one orbit in 385 days, making its years remarkably close to our own

With our current technology, however, it's hard to know much more than the size of an exoplanet and how far it is from its star.

But that's about to change.

New eyes in the sky

The majority of exoplanet discoveries have been made by the Kepler space telescope, after which most of them have been named. Launched in 2009, the telescope has now entered emergency mode 75 million miles away from Earth, due to a malfunction.

To study the atmospheres of potential Earth twins, scientists need new eyes in the sky.

To date, Seager has only been able to study the atmospheres of a handful of exoplanets -- all gas giants -- but she's involved in a new NASA program launching in 2017 to just scout the brightest nearby stars for small rocky planets in the habitable zone.

Called TESS (Transiting Exoplanet Survey Satellite), the two-year mission will accumulate data that will then be fed into the James Webb Space Telescope, the next Hubble, which is due to launch in 2018: "It's going to be amazing," says Seager.

The James Webb telescope -- named after the head of NASA during the pioneering era of the 1960s -- will look at the cosmos with unprecedented clarity thanks to its use of a primary mirror about five times larger than Hubble's. It will also offer direct imaging of exoplanets by blocking the blinding light of their host stars with special instruments that make them more visible. This will allow Seager and other astronomers to study exoplanets like never before.

Seager believes many of the planets in their search will be the rocky, watery worlds she's been looking for.

"I'm absolutely confident they're out there."