Variations in the ability of sand particles kicked into the atmosphere from deserts in the Middle East to absorb heat can change the intensity of the Indian Summer Monsoon, according to new research involving Wang Group postdoc Qinjian Jin.

Read this story at University of Texas at Austin

The research was published July 28 in Scientific Reports, an open access journal from the publishers of Nature.

The Indian monsoon is a period of intense rainfall that more than a billion people rely on to bring rains to farmland. The results of the study could help improve monsoon prediction models, which usually use a constant value for sand particles' heat-absorbing ability. Because the absorbing ability varies greatly with region and time, assigning a constant heat-absorbing ability for the particles tends to underestimate the impact that absorbed heat can have on the monsoon system, the authors said.

The study was led by Qinjian Jin, a postdoctoral researcher at the Massachusetts Institute of Technology, who conducted the research while earning his Ph.D. at The University of Texas at Austin's Jackson School of Geosciences. He collaborated with Zong-Liang Yang, a professor in the Jackson School's Department of Geological Sciences, and Jiangfeng Wei, a research scientist in the department.

The researchers found that mineral dust that originates in the Middle East can strengthen the Indian Summer Monsoon by heating the atmosphere above the Iranian Plateau and the Arabian Sea. But the dust's ability to absorb heat affected how much the dust influenced the monsoon. Dust that absorbed heat more efficiently was linked with increases in monsoon rainfall.

"The heating ability of dust aerosols largely determines how the monsoon responds to dust," Jin said. 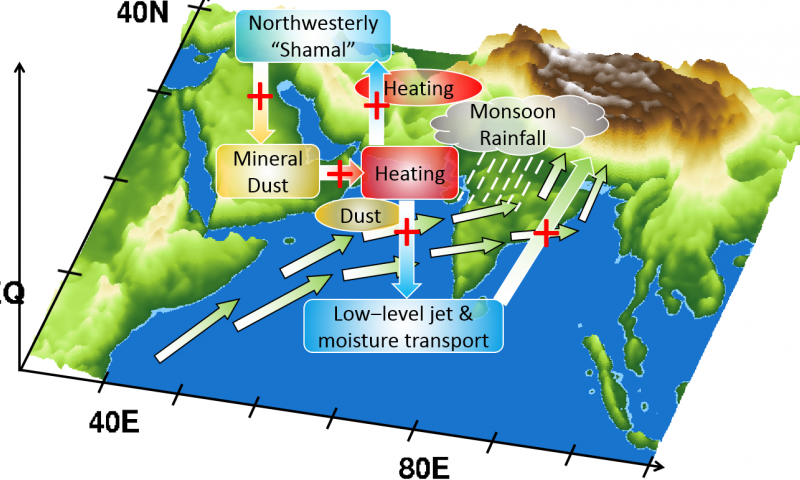 Monsoon intensity enhanced by heat captured by desert dust: A figure depicting dust-monsoon interactions. The positive feedback between dust emissions,atmospheric heating, and shamal winds is seen as a cycle over the Middle East and the Arabian Sea - Image credit: Qinjian Jin

The researchers examined the impact of mineral dust on monsoon strength by creating seven high-resolution computer simulations that varied the heat absorption of the mineral dust.

The Indian Summer Monsoon accounts for up to 80 percent of the annual rainfall in the Indian subcontinent. Increasing the strength of the monsoon can lead to flooding that can cause massive losses in life and crops. Jin said that for climate models to accurately capture monsoon behavior, they must account for the variability in mineral dust's heat absorption.

"This heating is represented in very different ways in different climate models, and is one of the factors responsible for inconsistency of climate model results," Jin said. "This study addresses the necessity for developing a new method to represent dust heating in climate models."

While this study focused on mineral dust's heat-absorption abilities, Jin said he is planning future research on how the dust particles can influence climate by changing cloud formation and behavior.

"Dust particles have been shown to be efficient ice nuclei, which may influence the monsoon by changing clouds' properties," Jin said.

Future research also needs to consider other dust processes, such as the surface erodibility of different dust source regions and how dust enters into the atmosphere, both of which have been studied by Yang and his other collaborators. 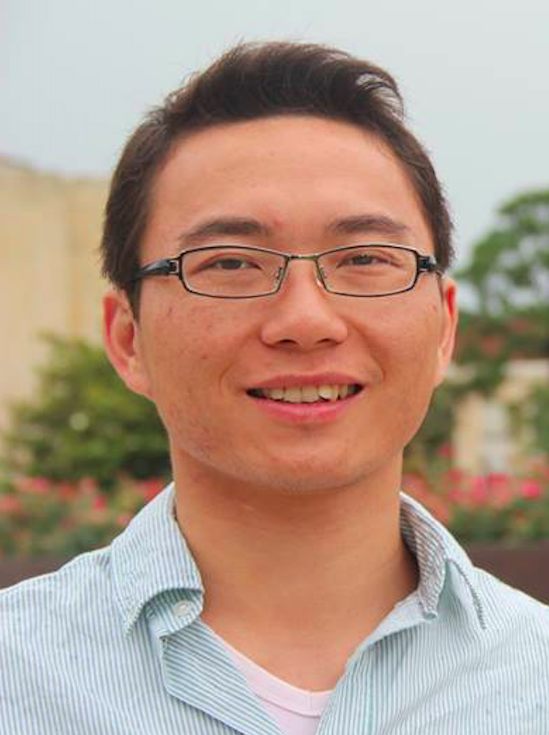 Qinjian Jin is a postdoctoral associate working in Chien Wang's Group. He is interested in direct and indirect effects of mineral dust and anthropogenic aerosols on clouds and climate; especially dust aerosols and their impacts on Asian monsoon.