Principal Investigator for REXIS Richard Binzel talks to MIT News about the Instrument that will help the OSIRIS-REx mission identify locations for collecting an asteroid sample.

An SUV-sized spacecraft, loaded with instruments and an extendable robotic arm, will soon be barreling toward a space rock, on a round-trip journey that promises to return an unprecedented souvenir: extraterrestrial soil, taken directly from an asteroid, that could hold clues to the very early universe.

This evening, at about 7:05 p.m. EDT, NASA’s first-ever asteroid sample return mission, OSIRIS-REx, (Origins, Spectral Interpretation, Resource Identification, Security-Regolith Explorer), will launch from Cape Canaveral, Florida. The spacecraft embarks on a two-year, 120-million-mile haul, at the end of which it will reach the asteroid 101955 Bennu, a near-Earth asteroid that is thought to be a cosmological “time-capsule,” composed of remnants of the early universe.

The spacecraft will spend some time remotely analyzing the asteroid’s surface using a suite of instruments, including REXIS, (Regolith X-ray Imaging Spectrometer), an instrument designed and built by more than 50 MIT students. The spectrometer will analyze the interaction of the sun’s X-rays with the soil, or regolith, to identify chemical elements on Bennu’s surface. REXIS may also help determine the best locations for the robotic arm to reach out and grab a sample. The mission is scheduled to return an asteroid sample to Earth in 2023.

Prior to liftoff, MIT News spoke with Richard Binzel, professor of earth, atmospheric, and planetary sciences at MIT, and principal investigator for REXIS, about MIT’s role in launching the mission.

Q: While OSIRIS-REx has just begun its journey to Bennu, it’s almost as if another journey has ended — namely, the efforts by hundreds of scientists and students to get this mission off the ground. Can you take us through some of the highlights, scientific and personal, from the final weeks of preparing for the launch?

A: It may be hard to believe, but for our MIT team and for our partners at Harvard, the final countdown began five years ago. Outer space knows no weekends, no holidays, only the relentless march toward the date when the Earth and our target asteroid are in perfect alignment for launch. Every decision we have made toward designing, building, and testing the spacecraft and its instruments had to be evaluated against this immutable schedule. So it has been a five-year marathon at full sprint knowing that you face Heartbreak Hill every day. You are always one slip, one faulty part, one failed test away from being knocked out of the race against the clockwork of the solar system.

So, finally getting to the launch pad feels surreal. You see the finish line in front of you but suddenly everything seems to decelerate into slow motion. Your final spacecraft checks are complete, and the focus shifts from the spacecraft itself to the launch team whose job is to get you off the pad. All you can do is wait and for once, you actually want the clock to tick down to zero. But as you wait, you are still constantly going back through your head and wondering, “What have we overlooked? What have we failed to anticipate?” There is always something unexpected, but we hope we have built in enough extra margin of capability to deal with it.

Launch is a highlight not only for being a spectacular sight, but that final countdown moment brings all of the team together to a single place and time. We have all been working hard at our own facilities and universities, but now we are all together to share a great moment of success. Our REXIS instrument on board OSIRIS-REx has involved more than 50 students, many of whom don’t know one another because they graduated and moved on before the next generation arrived. Seeing those past and present students come together and connect through their shared experience makes me very proud of our team. It is amazing how much they have accomplished in what seems like a very short time.

Q: The main goal of the mission is to pick a sample from the asteroid and return it to Earth. To accomplish this, what are the main steps the spacecraft will have to take once it arrives at the asteroid, and what role will MIT’s REXIS instrument play in this endeavor?

A: From the launch pad we have a two-year journey around the sun to catch up to Bennu and fire our thrusters to have the OSIRIS-REx spacecraft go into orbit. Our first orbits are rather distant as we get the “feel” for Bennu’s gravity field before going lower. We have a suite of cameras that will begin a detailed reconnaissance of the asteroid surface to create a list of promising sample sites. Safety is the first priority for any site. Basically we want large, smooth areas that aren’t filled with craggy boulders.

When OSIRIS-REx descends into its second, lower orbit, that’s when the REXIS instrument swings into action. Literally! We have to execute a command that enables our spring-loaded cover to pop open. That cover protects our detectors from space radiation during our two-year flight to Bennu. Once we are open, our first step is to point out to space at a well-known astronomical source so that we can calibrate how well our instrument is functioning. Getting that cover open and those first confirming measurements will be heart-stopping moments for us.

REXIS has “X-ray eyes” that will then begin scanning Bennu’s surface to map out regions that may be glowing (fluorescing) in response to the sun’s X-ray light streaming onto its surface. By measuring the exact energies that the surface emits, we can find regions that might be particularly rich in iron, silicon, sulfur, and magnesium. We will have our map of atomic elements to compare with other teams’ maps of minerals, and we will collectively weigh the science pros and cons of each site. Our emphasis will be on material that looks like it has been well-preserved since the beginning of our solar system. Once selected, OSIRIS-REx will descend like a giant mosquito, with its long arm touching the surface for just a few seconds to snatch our sample. With that sample secured into a re-entry capsule, it will be a long journey back to Earth. The journey ends dramatically in 2023 when the OSIRIS-REx spacecraft drops off that capsule back into the atmosphere. Seeing the parachutes deploy and that precious cargo landing safely will be a great triumph.

Q: What will MIT’s role be once the spacecraft returns the sample to Earth?

A: At MIT we have some of the most sophisticated sample-analysis instruments on Earth, where even a fraction of a gram of new material is a treasure trove of new information.  That’s why we are working so hard to get a pristine sample from space directly into our laboratories. Our first priority is to look at the chemistry of the sample, because we think Bennu is like a Rosetta stone for the original material from which the Earth formed and life evolved. It is a way of looking back in time at our very own human beginnings. From there, we will want to decode the history of the solar system, as Bennu itself is a surviving piece of the building blocks of planets.

For the REXIS team, we are very interested to see if the elemental chemistry we “predicted” with our X-ray measurements at Bennu proves to be correct. It’s not just because we care about getting an A+. It’s because demonstrating that a REXIS-like instrument is a reliable extension of human capability creates an enabling technology we can apply to countless new destinations. There are thousands of asteroids in orbits accessible from Earth that we care about for science, for future resources in space, and perhaps even to evaluate some future asteroid impact hazard. If a shoebox-sized instrument like REXIS can prove itself to be a trusty explorer, we are opening a gateway to a long-term future of ongoing exploration. That is the legacy that I hope REXIS will leave and that every student involved can be very proud of.

Story Image: This artist's depiction shows the OSIRIS-REx spacecraft contacting the asteroid Bennu with its Touch-And-Go Sample Arm. The mission aims to return a sample of Bennu's surface coating to Earth and to return detailed information about the asteroid and its trajectory - Image credit: NASA's Goddard Space Flight Center 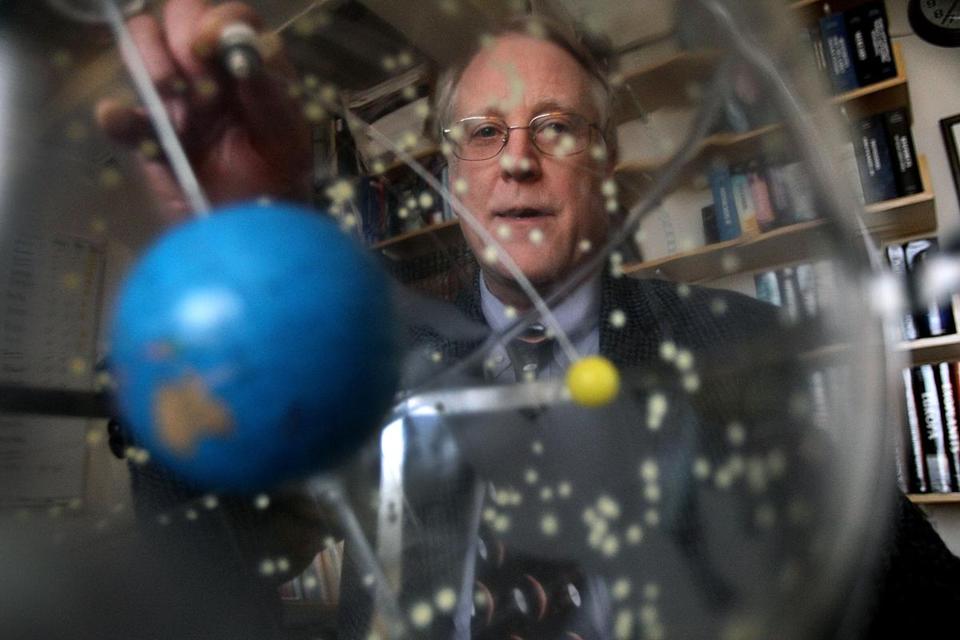 Richard Binzel is a co-investigator on NASA’s OSIRIS-REx asteroid sample return mission where he has led the development of a student-built flight instrument, the Regolith X-ray Imaging Spectrograph (REXIS).

Live coverage of and commentary of the launch of the OSIRIS-REx spacecraft begins at 5.30pm (launch is scheduled for 7:05 p.m.)

Student-Built Instrument Headed to Asteroid and Back MIT News