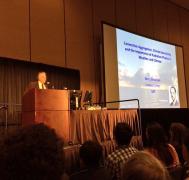 Kerry Emanuel, the Cecil and Ida Green Professor of Meteorology at MIT, recently gave the 2015 Bjerknes Lecture at the annual American Geophysical Union conference in San Francisco, California. The AGU recognized Emanuel for his “outstanding contributions to the fundamental understanding of tropical cyclones, convection, and weather and climate sciences.”

“I was honored and delighted to be invited to present the 2015 Bjerknes Lecture at the Fall AGU meeting,” Emanuel said. “I began my career teaching in the department that Jacob Bjerknes started at UCLA and had long admired his life and work. I was particularly gratified by the thoughtful questions from the audience that followed the talk.”

Established in 1993, the annual lecture is given by a prominent scientist in honor of the memory of Meteorologist Jacob Bjerknes, known for determining the link between El Niño and the Southern Oscillation. Emanuel’s lecture, “Convective Aggregation, Climate Sensitivity, and the Importance of Radiation Physics in Weather and Climate,” focused on the nontrivial coupling of circulation and radiation physics in relation to diverse problems including the Madden-Julian Oscillation, tropical cyclones, and the relative insensitivity of tropical climate to radiative forcing.

Emanuel joined the MIT faculty in 1981 and has been the Director of the Center for Meteorology and Physical Oceanography and, more recently, the Program in Atmospheres, Oceans, and Climate. He also co-founded the Lorenz Center, which is devoted to learning how climate works and fostering creative approaches to increasing fundamental understanding.

Emanuel’s research interests include tropical meteorology and climate, with a specialty in hurricane physics. He is also interested in cumulus convection, the role of clouds, water vapor, and upper-ocean mixing in regulation of climate, and advanced methods of sampling the atmosphere in aid of numerical weather prediction. He is a member of the National Academy of Sciences and in 2006 was included in Time Magazine’s "100 People who Shape Our World".