EAPS geoscience faculty lead a trip exploring the many unique geological features along the way from Boston to the Connecticut River Valley, and spanning over 600 million years of deep time. 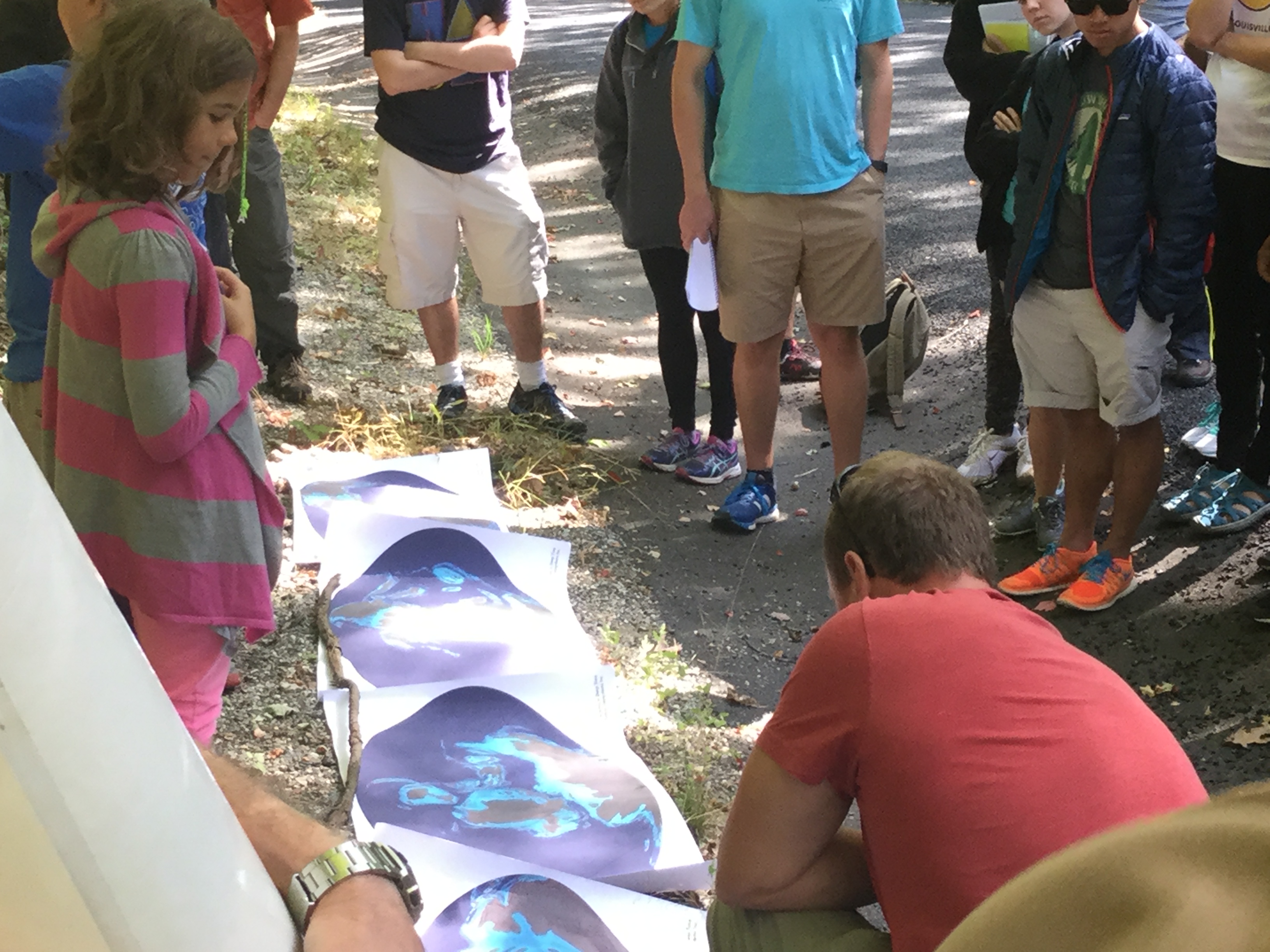 The journey started in Arlington at Robbins Farm Park, looking out over Boston Basin. Professor Jagoutz explained the Precambrian history of Boston Basin and the easternmost New England rock formations, illustrating several important geological concepts, and setting the stage for the rest of the trip. 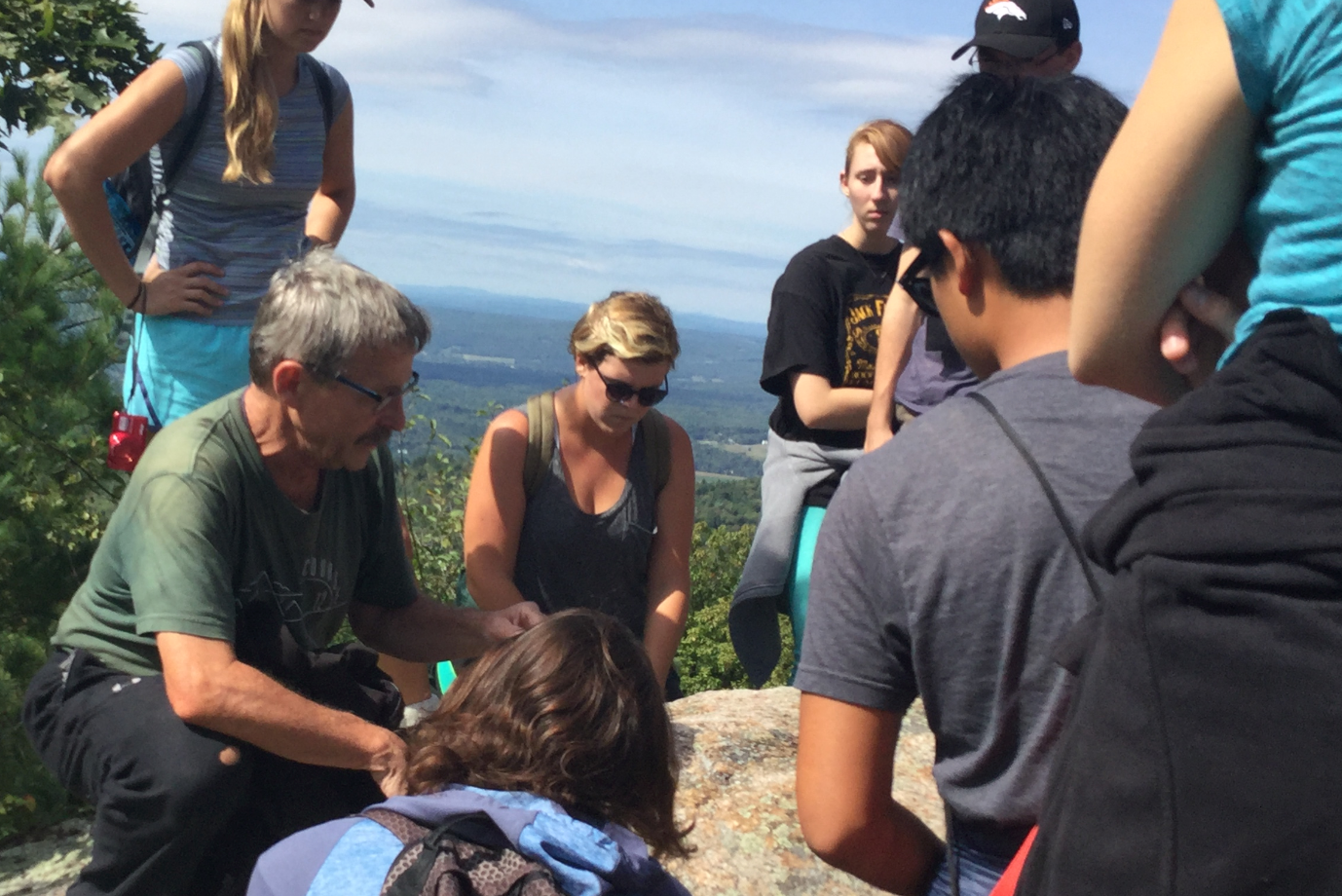 From there, we traveled west to the Crag Mountain Conglomerate in Northfield, MA. Here, professors Grove and Jagoutz described the complex histories of these heavily folded and deformed metasedimentary rocks laid down in the Paleozoic. 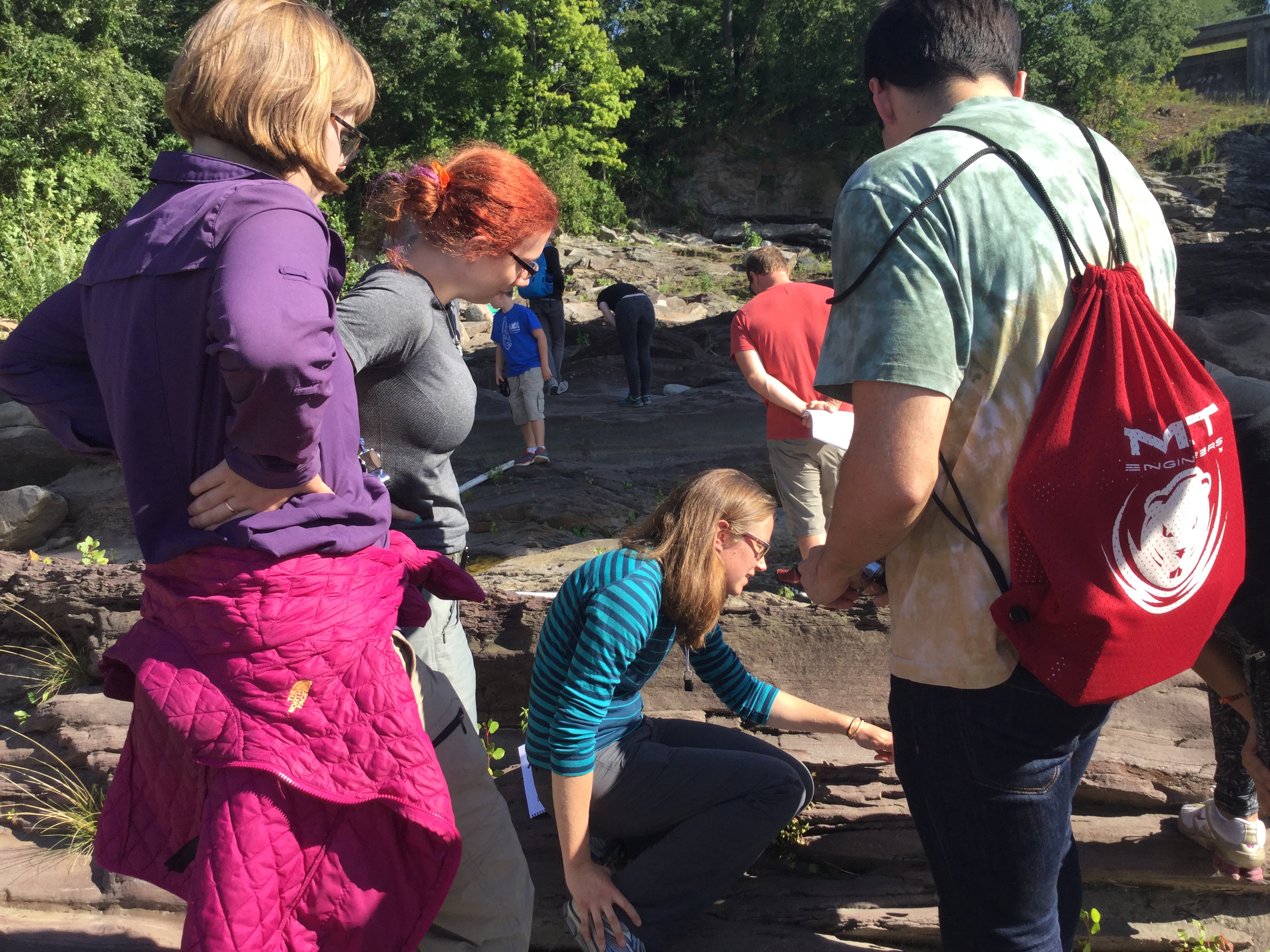 Moving on to the Connecticut River, we stopped at the Turners Fall Sandstone formations, where Professor Bergmann described the detailed ecological history preserved in these early Jurassic Lakebeds, with the underlying basalt flows caused by the rifting of the Pangaea supercontinent still visible downstream. 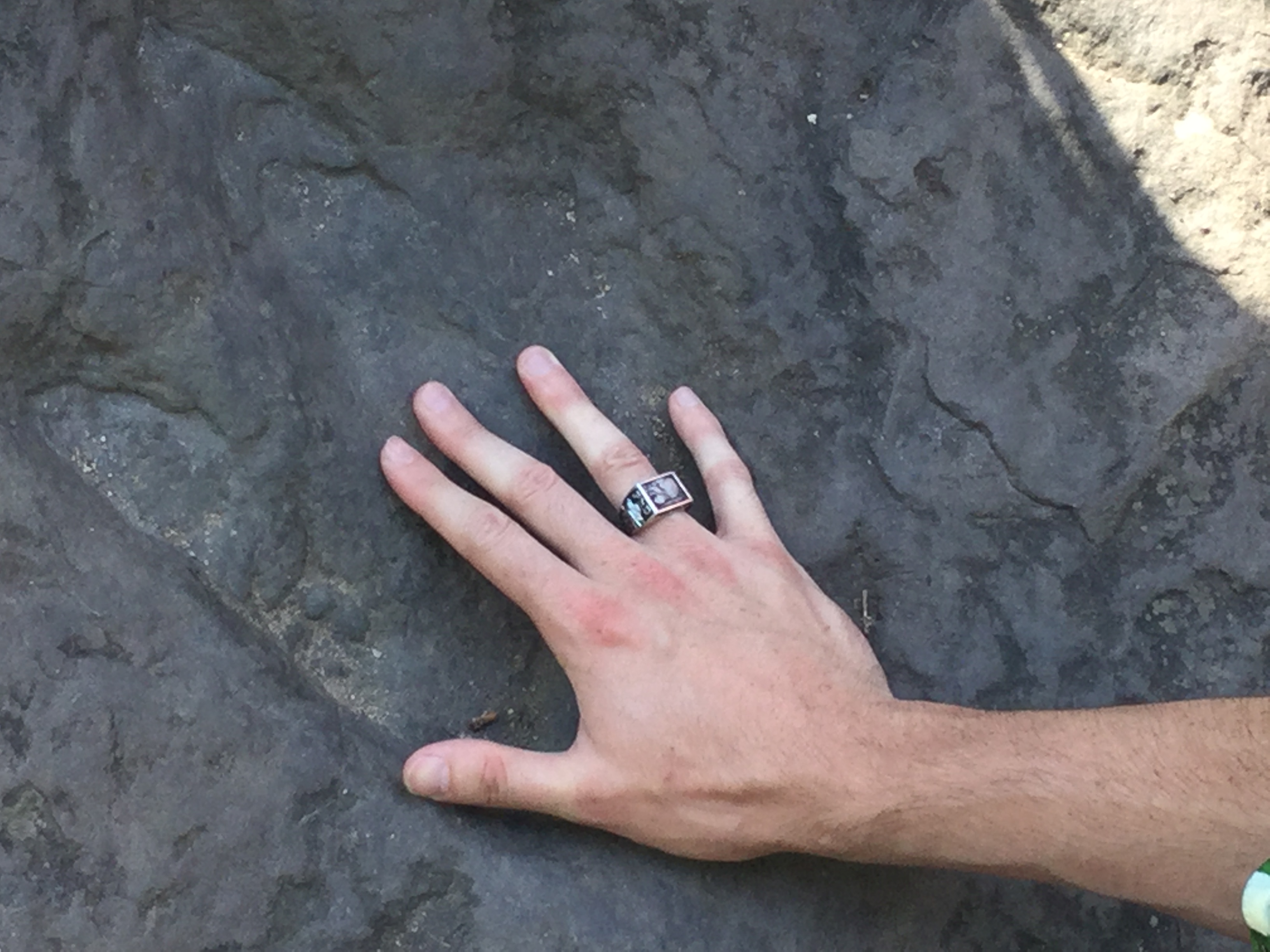 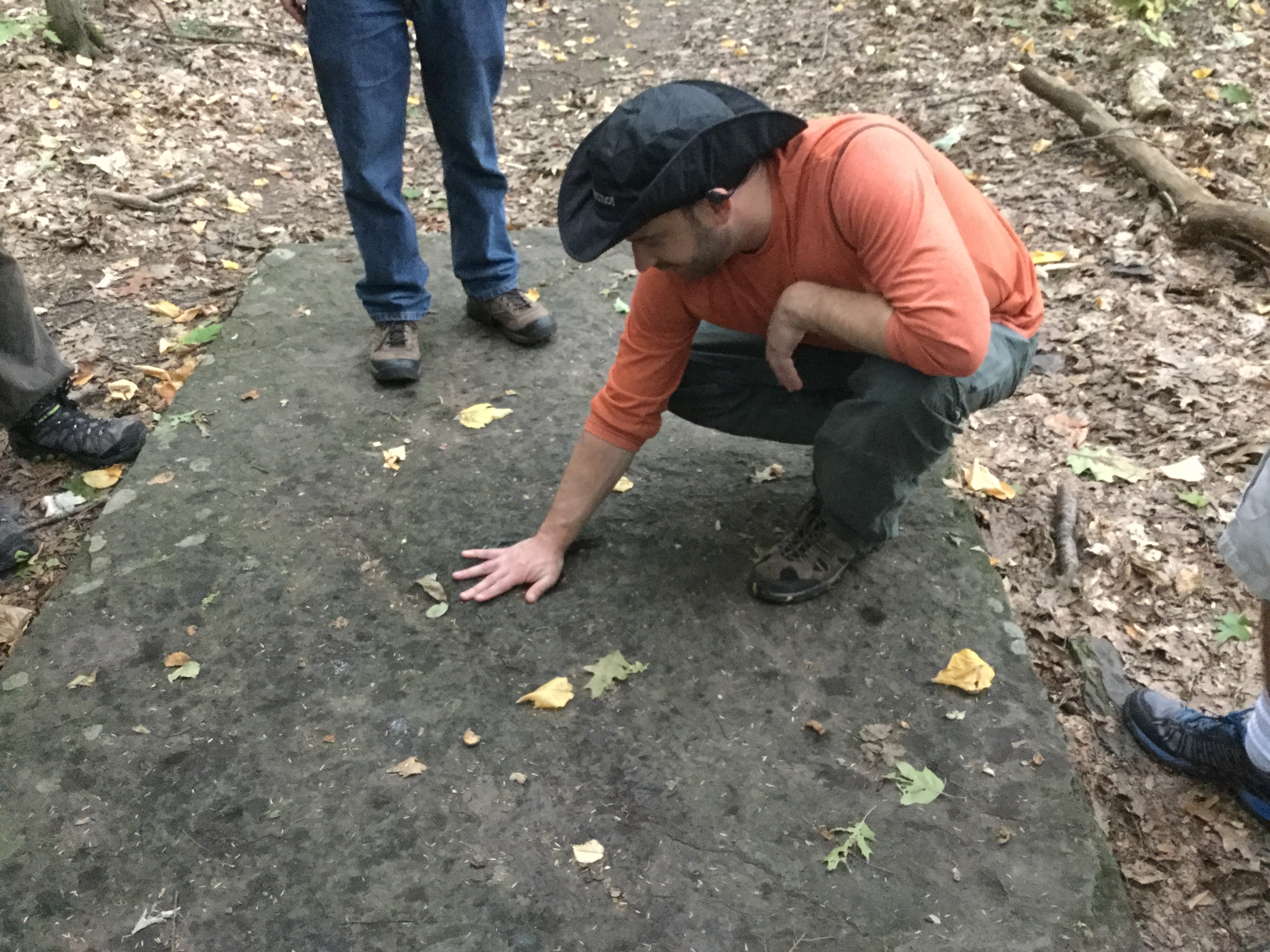 Moving south along the Connecticut River, we next came to Dinosaur Footprints Reservation in Holyoke, MA, where Professor Fournier described life in the Triassic, and the early evolution of Dinosaurs and other extinct reptile lineages. On the way to Barton Cove Campground, Professor Grove led the way to some much more recent deposits, a glacial varve remaining as evidence of the huge glacial Lake Hitchcock that once filled central MA.

That evening, we set up camp and relaxed with a bbq dinner and campfire s’mores kindly prepared by our graduate volunteers. Despite the wet forecast, we had a windy, clear early evening and a bright full moon, followed by only a few light showers overnight and in the early morning.  We broke camp bright and early, and, after oatmeal, fruit and coffee, headed out for the next stops on our adventure. A short walk from our campsite, Professor Herring led us to a part of Barton Cove that used to be an abandoned quarry, where many of the famous trackways of the Hitchcock Ichnology Collection were discovered.  Remarkably, some pieces of shale with intact dinosaur tracks even remain visible at the quarry site! 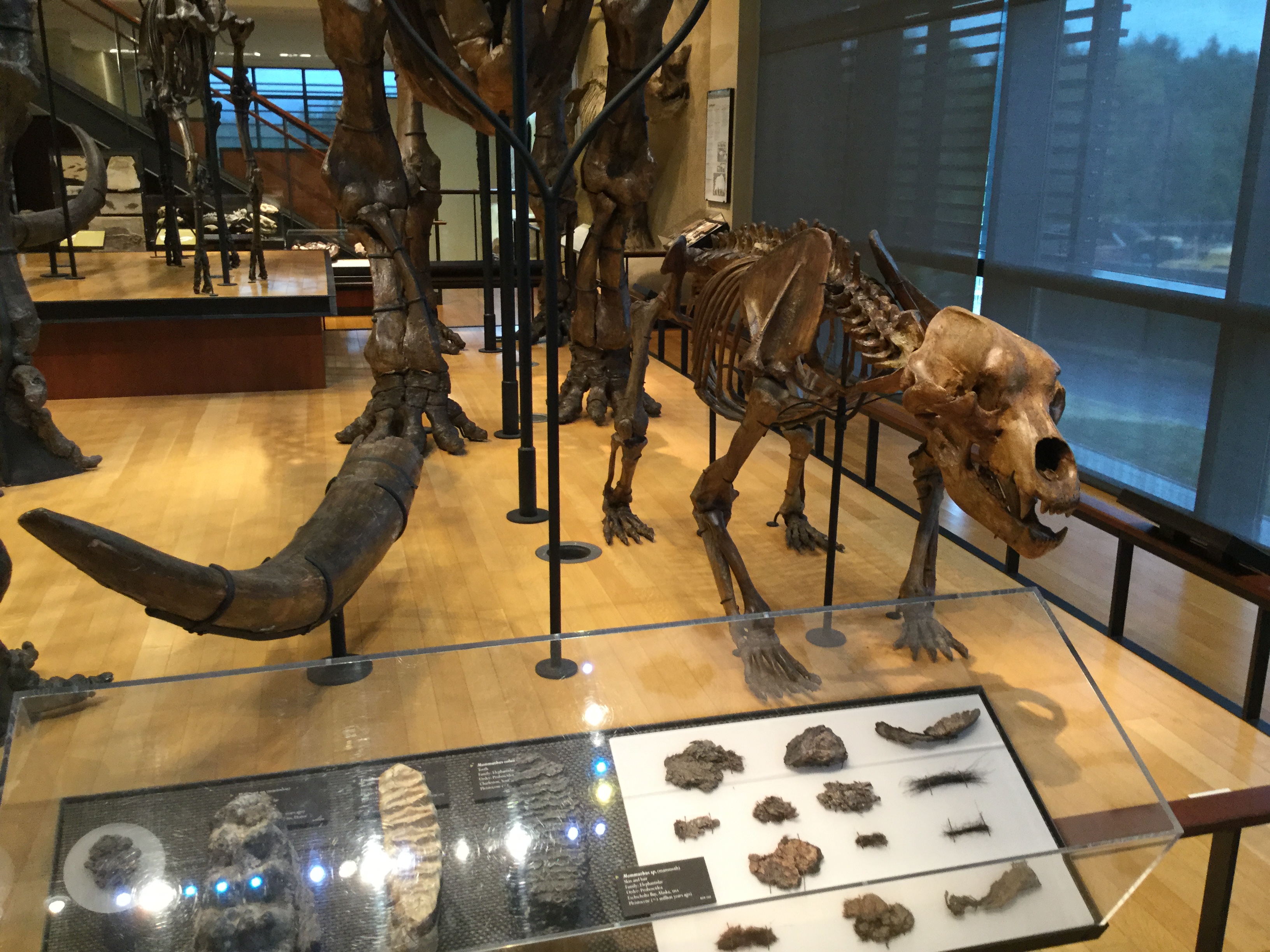 We then continued to our final stop, Amherst College, for a tour of the Hitchcock Ichnology Collection itself by Professors Bergmann and Fournier, as well as the other exhibits of the museum, which include an extensive collection of invertebrate and vertebrate fossils, with dinosaurs and Pleistocene megafauna among the major displays. 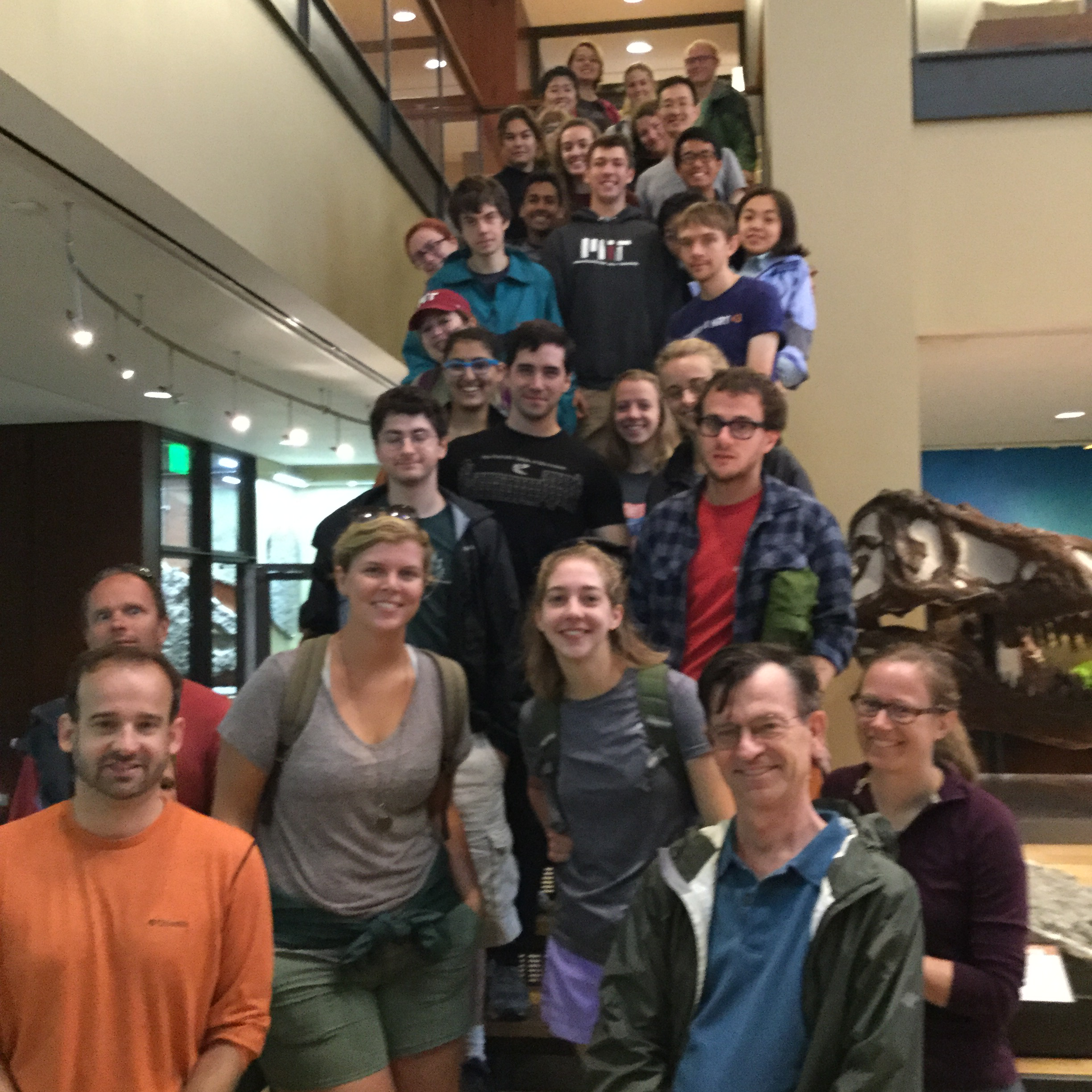 We thank all of those at EAPS who worked to make this trip possible, and the enthusiasm of the students who are the driving force behind these events. Particular thanks to Yanick Pierrre for taking pictures for us.

The EAPS Department Fall Field Trip provides the opportunity to get up close and personal with the geology of central Massachusetts. Within a two-hour drive from MIT participants discover 200 million-year-old dinosaur footprints, lava flows and sandstones (some with fish fossils) deposited during the early stages of the rifting of North America from Africa, deposits of sand and gravel from melting glaciers, glacial lake deposits, evidence for starkly different climate in the past, and much, much more. Designed to be an introduction to how geologists see the earth and read the rocks, the goal of this overnight trip is to encourage participants to think about the processes that shape our world, how processes are recorded in the rocks, and how we can deduce earth's history. The route from Boston to central Massachusetts passes through an impressive, and perhaps unexpected, variety of geologic environments: A diversity reflecting the long, complex, and incredibly interesting geologic history of northeastern North America. The group camps overnight at Barton's Cove on the Connecticut River where they enjoy a barbeque and campfire activities. Sunday morning is spent exploring the Beneski Museum of Natural History at Amherst College before returning to campus early in the afternoon.

This annual trip is free and open to the entire MIT community including alumni and friends. Email eapsinfo@mit.edu. 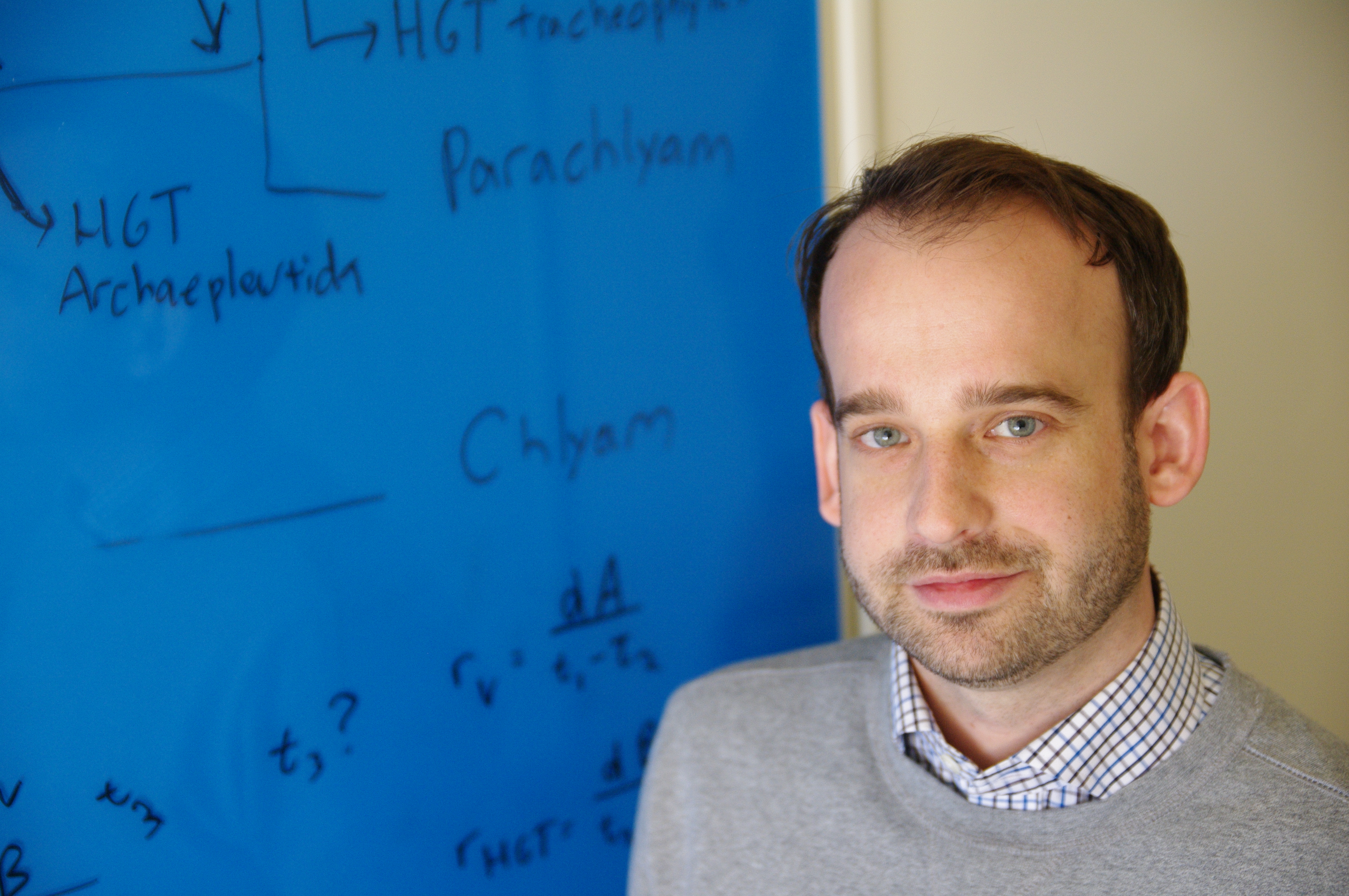 Greg Fournier is the Cecil and Ida Green Career Development Assistant Professor. His research integrates phylogenetics and horizontal gene transfer (HGT) with studies of microbial evolution, geochemistry, and planetary history. Specific areas of his research include: HGT- and genome-based calibration of molecular clock models of microbial evolution; ancestral reconstruction of ancient proteins and metabolisms; the biogeochemical impact of HGT and microbial metabolism evolution; and the role of partial HGT in the complex ancestry of organismal lineages.

How Structure Arose in the Primordial Soup Quanta Magazine

Ancient Whodunit May be Solved: The microbes did it! MIT News