Professor Emeritus B. Clark Burchfiel was feted by the Chinese government at an award ceremony at the Chinese Consulate in New York on March 24, 2016.

Burchfiel is a structural geologist interested in the origin, development, and structural evolution of the continental crust. After a life-long career spent exploring the geology of the Western United States, Eastern Europe, Scandinavia, South America, North Africa, Middle East and China, recent work has focused on the geological history and evolution of the Tibetan plateau.

Burchfiel earned his Ph.D. in 1961 from Yale University. His first academic appointment was to the Geology department at Rice University. He joined the MIT faculty on 1976. Over his career he has written close to 200 papers and mentored more than 50 graduate students.

Burchfiel has been the recipient of numerous prestigious awards, including a recent Career Award in International Geology from the Geological Society of America. He is a member of the National Academy of Sciences. 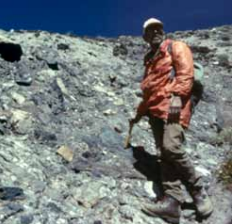