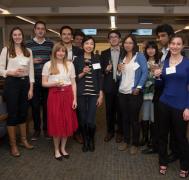 Driver's Ed for the Planet

EAPS Patrons Circle members braved an April rainstorm to gather in the Ida Green Lounge for a celebratory evening with EAPS faculty and this year’s fifteen EAPS graduate fellows.

Four students (Christine Chen, Charles Gertler, Jamie Potter, and Josimar Alves da Silva) spoke about their different paths to EAPS, and their adventures, trials and tribulations on the way. These ranged from being diverted from climate research in Nepal to a rescue role during the recent earthquake, to an extraordinary transition from an impoverished childhood in Sao Paola, Brazil to a geophysics career and the Earth Resources Lab. Several past graduate fellows displayed planetary and climate science posters during the reception, and Bram Willemsen even brought along some new seismic equipment to talk about - all of which sparked some lively science discussions with our Patrons.

Founded in 2015, EAPS Patrons Circle honors those fellowship donors who have made a major gift to a fellowship fund or made a major commitment to support fellowships through their estate plans. At the second Annual Patrons Circle gathering on April 7, 2016 new Patrons Patricia Callahan, David Dee, and Robert Cowen joined George Elbaum and Mimi Jensen, Donald L. Paul, and Neil and Anna Winter Rasmussen to meet former and current fellows.

Christine Chen, the 2015-2016 Callahan-Dee Fellow, a third year graduate student in the MIT-WHOI Joint Program studying past climates -- paleoclimatology -- with Professor David McGee, spoke about her path to graduate school at MIT as the only child of first generation immigrants from China. A graduate of Princeton University with a bachelor's degree in Geosciences (2013), Chen was recently named a National Geographic Young Explorer for her ongoing research reconstructing rainfall patterns from ancient lakes in the central Andes.

Charles Gertler, one of five 2015-2016 Norman C. Rasmussen Fellows, is a first year student in EAPS Climate Physics and Chemistry program studying past climates and cryosphere-atmosphere interactions with Professor Ron Prinn. Gertler spent time before coming to MIT studying pollution near Himalayan glaciers, during which time he became swept up in the humanitarian effort that followed the 2015 Nepal earthquake. Gertler graduated from Harvard College with an AB in Earth and PLanetary Science, later earning an MPhil in Glaciology from Cambridge University in the UK.

Jamie Potter, the 2015-2016 Theodore R. Madden Fellow, is a first year geophysics PhD student researching fracture interaction and surface deformation with Prof. Brad Hager. She spoke of her determination to contribute to making our energy usage more efficient and sustainable. A graduate of  Skidmore College with a BA in Physics with a minor in Geoscience,  Potter also holds a BE in Mechanical Engineering from Dartmouth College.

Last to speak was Josimar Alves da Silva jr, the 2015-2016 Whiteman Fellow (supported by George J. Elbaum and Mimi Jensen), a second year graduate student in EAPS Geophysics program studying with Dr. Michael Fehler. Originally from Brazil, he described in wrenching detail his struggle to educate himself, the arduous journey to his bachelor's degree in geophysics, and his deep gratitude to have finally made it to the graduate program in EAPS.

The evening was capped by Patrons Circle Chair Neil Rasmussen. Rasmussen reflected how, when he was growing up, "we used to think of ourselves as passengers on spaceship Earth, but today we find out more and more we're really not simply passengers but are actually in no small way driving the ship."

"As people who care about our planet and the long term future I simply find it hard to come up with a better opportunity to give than supporting EAPS."

"Just a little bit of steering of our beautiful space ship Earth today could help us avoid a lot of heavy breaking and swerving downstream in the future that might be very costly and painful for humanity."

"If our EAPS graduates can only make even a small impact in steering us in the right direction that could have a very important impact for future generations."

To learn more about joining the Patrons Circle and other opportunities to support EAPS please visit https://eapsweb.mit.edu/giving-alumni/giving 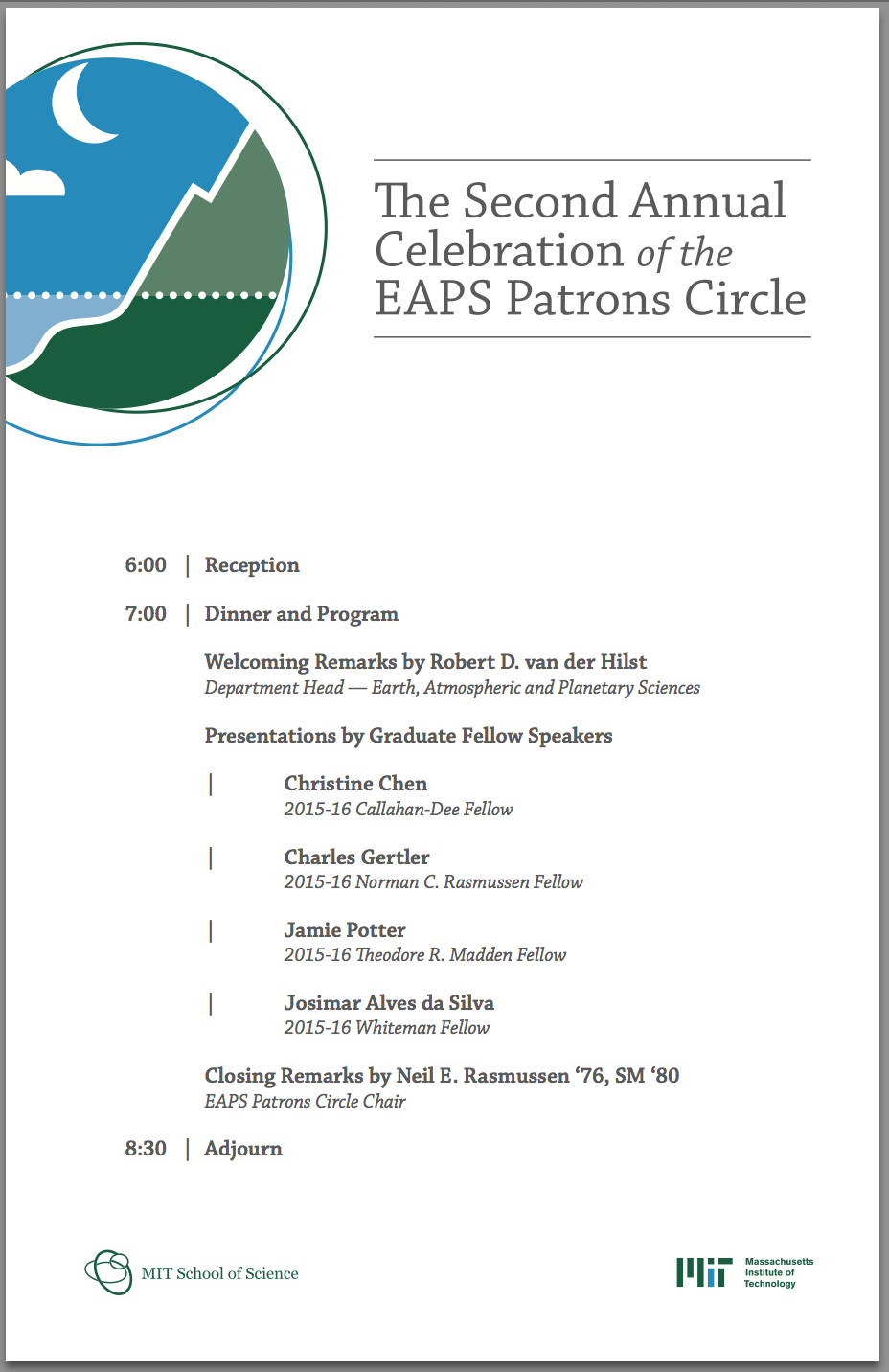