Sometimes the only way to see something is to close your laptop, get on a plane, and go visit it.

Over Spring Break, for the fieldwork component of her new course 12.090/12.S490 Sedimentology in the Field: Precambrian Environments, Prof. Kristin Bergmann led a team of students and postdocs on a trip to Van Horn, TX.

The class is intended to introduce the fundamentals of sedimentary deposition and geological reasoning through first hand field work. Background basics concerning relevant sedimentary depositional systems and how to make field measurements are covered in a weekly seminar ahead of the trip. 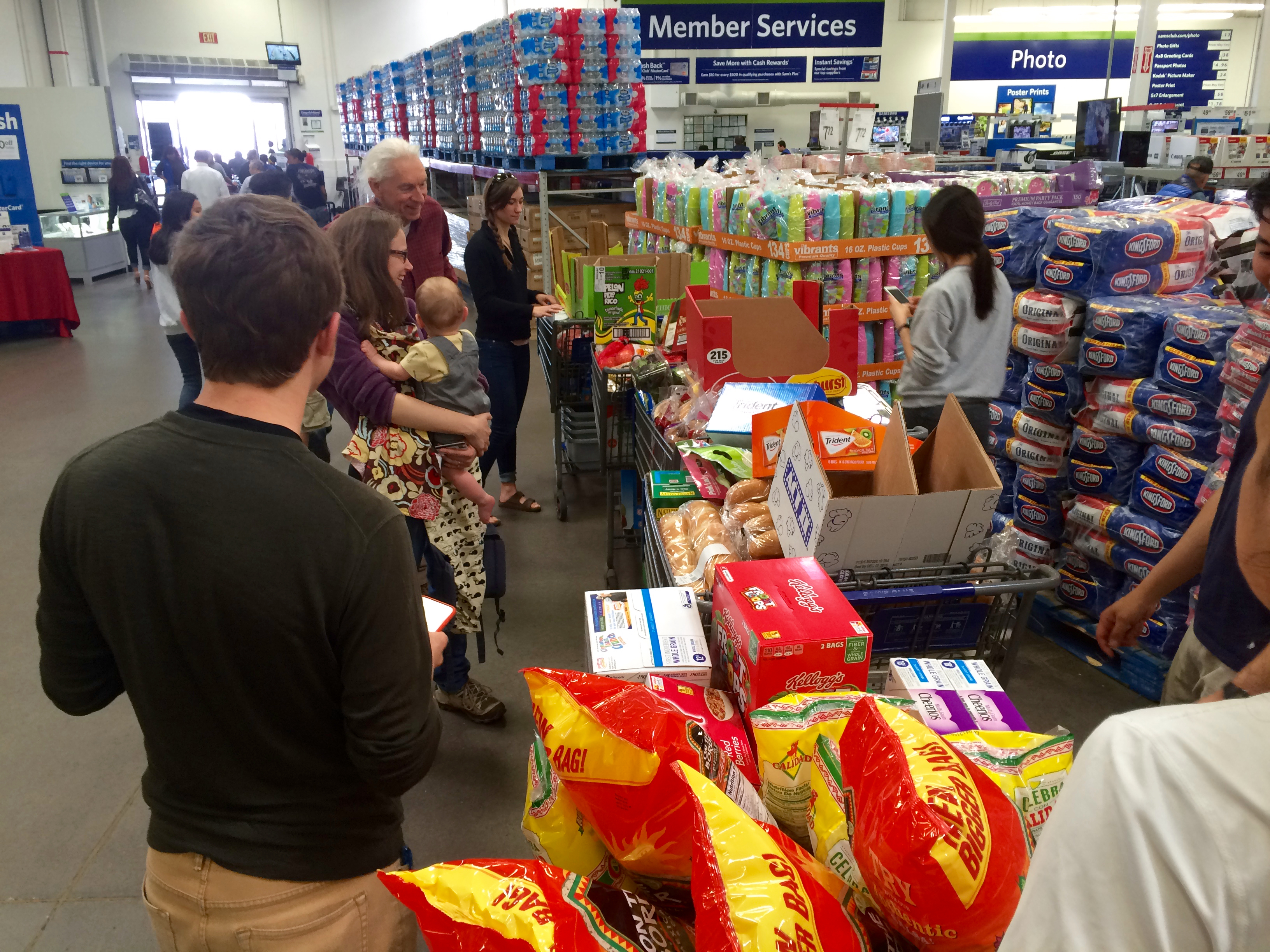 Stocking up: You can't do fieldwork on an empty stomach - Image credit: Christine Chen

"The owner of the ranch, Darice McVay, is an amazing woman. Before she started sharing the ranch with passing tourists and becoming involved in protecting the local big horn sheep population, she had a long career in the Austin music industry. We had daily evening campfire jam sessions that she joined in on with the graduate students from Caltech and MIT brought guitars, a fiddle, flute, ukulele, a melodica, hand pipes, egg shakers, and harmonicas. It was one of those great things where by the end of the week, those evenings of hanging out and singing by the campfire under the stars had brought the groups from the two schools together in a really fun way,” Bergmann said.

Using the family's homestead for cooking and for a few people to sleep, the majority camped around the house in tents. “We would either walk into the field each morning or drive a short distance up to Tumbledown Mountain (also on Darice's property) and hike from there,” Bergmann explained.

EAPS News recently sat down with Kristin to learn more about the trip.

HH: What is special about sedimentology in the field - what were you trying to teach... what can students look forward to learning?

KB: Sedimentary rocks record changes in an ancient environment whether a lake, river or ocean both laterally and vertically. It is impossible to reconstruct the depositional environment without going into the field. I hope to teach the students how to look at a rock and see the details in it, how to walk a bed out and look for changes along it, how to record information consistently to later interpret details of water energy, depth, current and wave action, biological activity.

HH: What is a day in the field like?

KB: There were three groups that tackled different projects. Each group had a big picture question they were working on for example: What were the dynamics of deposition of the Van Horn Formation around paleohighs; How did the microbial stromatolite morhpology and chert silicification change over the course of Allamoore Formation deposition; What were the nature of the contacts between the Allamoore, Van Horn and Bliss Formations, and what can that tell us about how time was apportioned over the Mesoproterozoic to Cambrian.

Each morning, they'd come up with a priority for that day: mapping an area, measuring paleoflow directions, measuring a stratigraphic column, tallying the sediment clast composition in a conglomerate, etc. Some days the groups would fly solo; on others either Christine, John Southard or I would go with the groups. They'd then work over the course of the day dividing up tasks within each group -- note taking, measuring stratigraphic height, taking pictures and GPS measurements, etc.

HH: Was this the first fieldwork trip you have been on since you had Owen last summer? How did you make that work? Has motherhood/ how has motherhood changed how you approach fieldwork?

KB: This was the first fieldwork I've done since having a baby and the first time my son Owen went out in the field. I was actually pregnant with Owen last winter when I was in the field in Van Horn so it was fun to go back and bring Owen with me properly this time. Having Owen in the field was often wonderful but sometimes challenging. He was a great sport about it. We had a backpack and he spent three days hiking with me and the different groups. The rest of the time he hung out with Nick at camp and in town stocking up on groceries. Usually he'd either gurgle happily away as we hiked or he'd nap. He had a big wide brimmed hat to keep the sun off him that I could usually convince him to keep on. I'm not sure motherhood has had a huge impact on my fieldwork yet. I'm planning a more traditional field campaign to Svalbard this summer. If anything it has probably driven me to mix up the types of field sites I consider to include both ones Owen can easily come along to and ones that he can't. 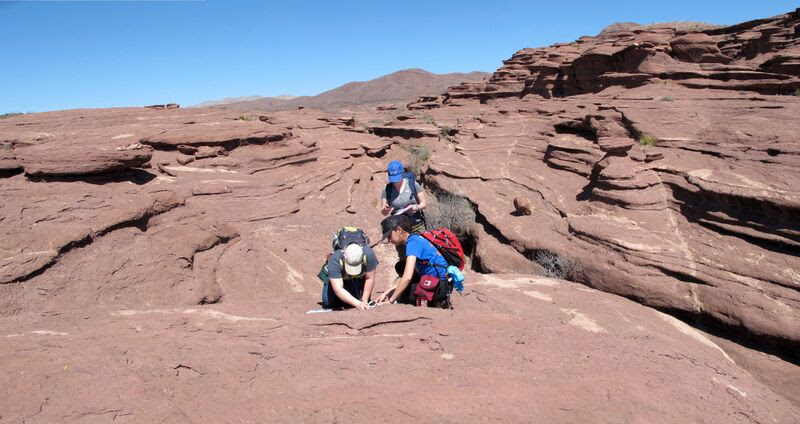 HH: From the pictures I've seen, Van Horn looks a lot like Mars - did "The Martian" get it right? When you look at pictures from Curiosity do you ever try and imagine what it would be like to do fieldwork on another planet?

KB: The Van Horn Formation is A LOT like many of the sedimentary rocks the current Mars mission MSL is seeing every day. In fact, the former project scientist for MSL, John Grotzinger, from Caltech, was taking pictures of features the whole week and sharing them with MSL team members. It is a great analog. I love looking at pictures from Curiosity because in some ways they look so 'normal' and earth like. That said, the field geologist in me struggles with the fact that I can't walk over the next hill to see what happens to a given outcrop in one of the photos.

HH: Do you think this will become an annual trip?

KB: Yes and I plan to vary the location of where we go so students can take the course for a few years and always see new rocks and refine their field skills. I hope we'll we able to head to another Precambrian location like Death Valley, or perhaps a Phanerozoic location like the White Inyo Mountains, even a modern environment like the Bahamas.

Want to know more about this and other field opportunities EAPS has to offer? Contact Vicki McKenna in the Education Office.

Packing for our Spring Break #geology #fieldtrip to Texas for our Sedimentology class! @eapsMIT #SpringBreak pic.twitter.com/um9Lb01XA9

Beautiful forsets in the Van Horn Fm! Students from @eapsMIT are mapping these features for #SpringBreak. #Geology pic.twitter.com/wgUh61a9NE

Students from @eapsMIT discussing the #geology of the stromatolites in Allamore Fm near Van Horn, TX! #fieldtrip pic.twitter.com/MczGncZXpZ

This group of @eapsMIT students has measured ~60m of section for their #SpringBreak #fieldtrip #geology project! pic.twitter.com/YYb02hMqkT

Our @eapsMIT students are going to any length to measure the strike & dip here! #dedication #geology #fieldtrip pic.twitter.com/HiknpFQxXc