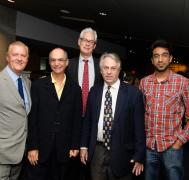 Established in 2011, The John Carlson Lecture communicates exciting new results in climate science to the general public and is made possible by a generous gift from MIT alumnus EAPS Visiting Committee member John H. Carlson to the Lorenz Center in the Department of Earth, Atmospheric and Planetary Sciences, MIT.  Past lecturers have specialized in a variety of topics ranging from climate dynamics, to meteorology, to geology, among them why the inherently chaotic behavior of the climate makes it so hard to predict; how changing climate, coupled with changing geology, has impacted habitat over geologic history; and the scientifically challenging relationship between clouds and climate.

This year, the Lorenz Center invited Dr. Richard Alley, the Evan Pugh University Professor of Geosciences in Penn State’s College of Earth and Mineral Sciences, an expert in glaciology, sea level rise and abrupt climate change, to present what we know about climate change from glaciology.

Based on his meticulous study of ice cores from Greenland and West Antarctica, Alley is widely credited with showing that the earth has experienced abrupt climate change in the past—and likely will again. In his highly engaging lecture, he presented ice-core evidence of slow as well as abrupt change in the climate record, touched on the geologic evidence of the extent and impact of previous ice ages, entertainingly called-out the behavior of pancakes and waffles as a model for ice sheet dynamics, and highlighted prospects for accelereted Antarctic and Greenland ice-sheet melting, and their potential as drivers for enhanced global sea-level rise.

Three groups from EAPS shared research during the pre-lecture reception held in the Omni Theater foyer. Graduate students Chrstine Chen, Kaylee Brent, and Maya Stokes shared work in the McGee Lab to reconstruct how precipitation and wind patterns responded to past climate changes as a way to improve our understanding of how rainfall might change in the future. As outreach for the Darwin Project, Prof. Mick Follows, together with postdoc  Jonathan Lauderdale and researcher David Talmy brought microscopes and phytoplankton collected from Charles River earlier in the afternoon to share the hidden world that exists  in a drop of water, and finally Prof. Glenn Flierl, aided by Physics graduate student Keaton Burns demonstrated the iGlobe, an Earth and planetary sciences teaching tool.

At a private dinner for EAPS donors and friends held after the lecture, this year’s John Carlson Fellow Mukund Gupta, a 2nd year graduate student working with Prof. John Marshall, was happy to have the opportunity to meet and thank John Carlson in person. This year's three new Norman C. Rasmussen climate fellows Raphael Rousseau-Rizzi, Ziwei Li, and Tristan Abbott (all first year students) also got to meet their benefactor, Corporation Member and EAPS Visiting Committee member, Neil Rasmussen. On behalf of the Lorenz Center, Kerry Emanuel and Dan Rothman thanked everyone for attending and for their support, and presented John Carlson with an autographed copy of Richard Alley’s book: “Earth: the Operator’s Manual”.

Dr. Richard Alley has ranged from Antarctica to Greenland to help learn the history of Earth’s climate, and whether the great ice sheets will fall into the ocean and flood our coasts. With over 270 scientific publications, he has advised the highest levels of government, and been recognized with awards including election to the National Academy of Sciences and the Royal Society. He hosted the PBS miniseries Earth: The Operators’ Manual, and has been compared to a cross between Woody Allen and Carl Sagan for his enthusiastic efforts to communicate the excitement and importance of science to everyone.

The Lorenz Center in the Department of Earth, Atmospheric and Planetary Sciences at MIT is devoted to learning how climate works. Named after the late MIT meteorologist Edward N. Lorenz, a pioneer of chaos theory, the Center fosters creative approaches to increasing fundamental understanding.