Answers in the Andes

Christine Chen is a scientist on a mission.

Thousands of miles away from the Massachusetts Institute of Technology where she is a third-year doctoral student, Chen reached one of the most remote regions on Earth equipped with a knapsack, a rudimentary rock hammer and a burning question—can ancient lakes in the Andes Mountains shed light on past climate, clues that can then be used to predict future climate change? 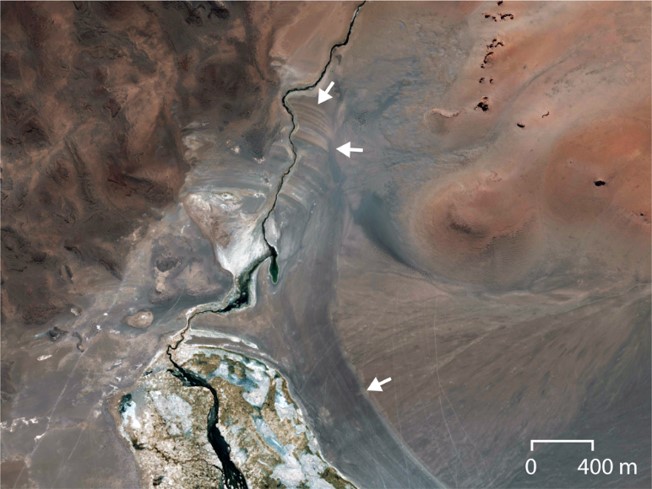 Satellite image of the northwest corner of Agua Caliente I. The white arrows indicate the location of the ancient abandoned shorelines, which form a bathtub-like ring pattern. Photograph courtesy of Christine Chen. (Neil Murthy/Medill)

The question is long established in the field of earth science and has prompted exploration into the world of “paleoclimates” (or “ancient” climates). As the planet currently undergoes unprecedented change in terms of rising global temperatures, scientists have long speculated that by critically analyzing past changes in Earth’s climate, they can develop climate models that can be used to predict temperature and precipitation changes of the future. Of greatest uncertainty is how rainfall patterns will change in the future.

“For the modern climate, we’ve got rain gauges and we can calculate rates of evaporation,” explained Chen at the annual fall Comer Conference on abrupt climate change. “But no one was around thousands of years ago to set up a rain gauge. Lake level changes are a proxy for water availability.”

Most of the work on lake levels and paleoclimate has been done on European and North American lakes, Chen said. South American lakes are markedly underrepresented in the scientific literature, and Chen hopes that her work in the Andes will bring South America to the global forefront of much needed data. She sees in the barren landscape as a treasure trove of ancient knowledge, revealing answers to ages-old mysteries of climates and precipitation patterns.

The lakes that Chen studies, Agua Caliente I, Laguna de Tara and Salar de Loyoques, are vestiges of much larger lakes from thousands of years ago. With no outlets such as streams or rivers from these lakes, they depend on the competing forces of rainfall and evaporation to maintain water levels. As a result, Chen hypothesizes that higher water levels indicate periods when rainfall was plentiful. By matching water levels with the time record, Chen can then evaluate how global temperature patterns affected past rainfall. This will provide important lessons that will shape current climate models on what changes we might expect in rainfall patterns in the future.

“Reconstructing past rainfall amounts is not easy; using lake levels is the best way to do this,” said Yoni Goldsmith, a doctoral student at the Lamont-Doherty Earth Observatory of Columbia University. “Using a variety of geochemical, geophysical and biological methods, it is possible to decode these climatic signals and reveal how climate changed in the past.”

A cursory glance at Google Earth images of Agua Caliente I, Laguna de Tara and Salar de Loyoques clearly shows that these lakes were once mighty bodies of water. Now, they are more like large salt flats.

“We can see awesome bathtub-like ring features,” Chen said, referring to a series of concentric circular patterns extending from the lakes. “These bathtub-like rings are essentially ancient abandoned shorelines,” she said.

On the ground, the bathtub ring pattern is not nearly as striking, and the ancient shorelines are marked by white rocky formations that to a lay person seem beautiful but not of great scientific import. But to Chen, the answers to her questions lie within these rocky formations coating the ancient shorelines. Chen calls these formations “tufas”, and thanks to their biological origin, their presence provides valuable insights into past conditions for these ancient lakes.

Tufas, fossilized remains of algae reefs, are made of calcium carbonate. When the algae making up these reefs were alive, they lived on the shore close to the water surface in order to get sunlight for photosynthesis. By analyzing the tufas back in a lab at MIT, Chen has figured out when these algal reefs were last alive, before they became fossilized into stone. And that gives her a timeline for the shrinking bathtub rings.

Many of the tufas—some located more than 60 meters away from the modern shoreline—fall between 15,000 to 25,000 years old. Based on those results, Chen can infer that thousands of years ago, these lakes were nearly four times larger than they are today, indicating that the barren landscape was once a lush terrain that was hospitable for more kinds of life.

Chen also looks at other formations known as ikaites, which are calcium carbonate crystals that form at the bottom of lakes within the mud only when the water is at very cold, near-freezing temperatures.

“Not only do the ikaite deposits give us a constraint on how high the lake was, but it also tells us the paleotemperature—how cold it was back then,” explained Chen. “This is pretty cool because usually proxies only give you one parameter, but we’ve got two. So that’s pretty exciting to find.”

Chen hopes to apply the same technique of finding the age of tufas and tracing abandoned shorelines to other ancient lakes in the Chilean Andes. She will then compare these data with temperature records from nearby ice cores from Andean glaciers to get a better idea of why these lakes were larger in the past.

Chen’s work comes at a time when the Central Andean region has been experiencing decreased rainfall and increased evaporation rates over the past 50 years, which has significantly strained local Andean communities. She hopes that her scientific contributions might help policymakers identify regions that are more sensitive to water availability issues, and divert resources to communities that are most likely to be adversely affected by future climate change. 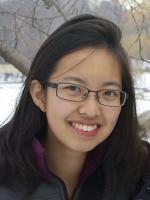 Christine Chen is currently a PhD student in the MIT-WHOI Joint Program and a member of David McGee's group. She is broadly interested in the history of Earth's climate, and uses field geology, geochronology, and modeling to reconstruct past changes in Earth's hydrological cycle, particularly from lacustrine archives. MORE

Christine Chen is the recipient of a 2015-16 Patricia Callahan & David Dee EAPS Graduate Student Fellowship. Follow her on twitter @earth2christine.

To find out more about giving opportunities, and ways to provide fellowship support visit the EAPS giving page.