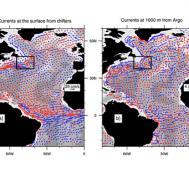 The American Geophysical Union’s online magazine Eos, recently spotlighted an MIT study that takes stock of what we know and what’s still uncertain about AMOC variability and its role in global climate.

Water circulates through the Atlantic Ocean like a winding ‘conveyer belt’, transporting heat from the southern hemisphere to the northern hemisphere. Scientists posit this current, called the Atlantic Meridional Overturning Circulation (AMOC), is a major controller of Earth’s climate. But understanding its influence on climate requires understanding the mechanisms behind it.

The American Geophysical Union’s online magazine Eos, recently spotlighted an MIT study that takes stock of what we know and what’s still uncertain about AMOC variability and its role in global climate. The research was published in Reviews of Geophysics and is co-authored by former MIT graduate student Martha Buckley PhD '11 and MIT Oceanographer John Marshall.

“One of the problems with the literature on the AMOC is that in terms of mechanisms, there’s no real consensus of what really drives variability in the circulation,” said Buckley. “Part of this paper was trying to come up with a way of viewing the literature that provided some consensus.”

Buckley and Marshall found that the AMOC is relatively stable over decadal time scales, but varies considerably on seasonal time scales or within a single year. Winds are also a contributing factor to short-term variability. But the major driver of decadal AMOC variability is buoyancy anomalies just east of the Grand Banks off of Newfoundland, where the Gulf Stream, North Atlantic Current, and Labrador Current intersect.

“The finding that buoyancy anomalies in this key region are important has large implications for monitoring,” Buckley said. “If you want to monitor the low frequency AMOC variability, you might want to put more sensors in this region.” Improved monitoring of the ocean could not only improve predictions of the AMOC, but also prediction of important climate variables, such as temperature and precipitation. The ocean has a large heat capacity and takes longer to circulate disturbances in currents and temperature than the atmosphere. Because oceans have a longer “memory,” they may hold the key to predicting some aspects of climate years in the future.

Further investigating the AMOC’s role in climate, Buckley and Marshall found that heat transport likely determines the position of the Intertropical Convergence Zone—a region where the trade winds from each hemisphere meet—north of the equator. Additionally, the AMOC may moderate the trajectory of human-induced climate change. “The circulation is a way for the surface ocean and deep ocean to communicate,” she said. “It’s a way for anthropogenic heat and carbon can move from the surface ocean to the deep ocean.”

Although the role of the AMOC in mean climate is well understood, its role in climate variability is not, Buckley noted. Changes in the AMOC on timescales ranging from decades to centuries may be linked to changes in sea surface temperatures (SST). But determining how much the AMOC factors into observed SST variability remains difficult. “Other processes could be involved,” she said. “Greenhouse gasses, aerosols, and local atmospheric variability all play a role.” More observational studies are necessary before researchers can make long term predictions of AMOC variability and its resulting effects on climate.

A Big Climate Driver in a Small Ocean Basin EOS

A Matter of Time for Arctic Sea Ice Oceans@MIT