The SMAP observatory, the first satellite designed exclusively to monitor soil moisture, is scheduled for launch later this month: Find out more about this NASA mission and its science lead CEE/EAPS' Dara Entekhabi.

On January 29, 2015, a Delta II rocket launched from Vandenberg Air Force Base will carry the SMAP Observatory, the first satellite designed exclusively to monitor soil moisture, into orbit. Once there, the satellite will make a map of the Earth’s soil moisture every three days—creating a measurement with the potential to dramatically improve weather forecasts and predictions of climate change.

It’s been a long journey to get to this point, as Prof. Dara Entekhabi, the science team leader of the NASA mission and a researcher at the Joint Program on the Science and Policy of Global Change, can attest. SMAP, which stands for Soil Moisture Active Passive, was first conceived in 1999. Over the last 15 years, Entekhabi has led a team of researchers at MIT and other universities, the NASA Jet Propulsion Laboratory, and the NASA Goddard Space Flight Center working on the satellite.

“The team has stuck together,” notes Entekhabi, who holds a joint appointment in MIT’s Department of Civil and Environmental Engineering and the Department of Earth, Atmospheric and Planetary Sciences. “It’s almost the same people as when we started working on SMAP.”

Once SMAP is in orbit it will measure moisture in the first five centimeters of the soil, using two instruments—active microwave radar and a passive microwave radiometer. The data transmitted back to Earth will represent a huge leap forward for scientists studying how the Earth works.

Entekhabi has spent his career learning about the Earth through collecting data, and the information collected by the SMAP Observatory will fill a major gap in our understanding.

“I was always into data and the environment, and reconstructing old records,” says Entekhabi. “I eventually became interested in creating new sources of data—unconventional data. Which is how I became involved with SMAP.”

SMAP is the first NASA mission dedicated to studying soil moisture and freeze/thaw data, which indicates the start and end of the growing season. Because of this, current records are spotty at best, and are based mostly on data from sparse ground stations and readings from satellites primarily designed for other uses.

The mission is somewhat unusual, Entekhabi says, because the long development period gave the mission team time to cultivate a community of early data adopters, who have already developed applications for the data. The information produced by SMAP will be tailored to fit these users’ needs—allowing them to immediately put the data to use for forecasting and research.

“This is a path-breaking approach for NASA, because the applications are woven into the science of the mission. So, it’s broad basic research, as well as application,” says Entekhabi.

There is an impressive range of uses for soil moisture data. These include the obvious, like improving weather and climate forecasting; estimating agricultural productivity; tracking droughts, floods and landslides; to the less obvious, such as providing early warnings of famine in areas dependent on rain-fed crops; determining soil hardness on military transportation routes, and forecasting the density of the lower atmosphere, which determines how much lift an airplane has.

The lack of information about soil moisture is also a problem for basic Earth science research, because soil moisture links the three major cycles of the Earth system—the water, energy, and carbon cycles—together. Without accurate soil moisture data it’s nearly impossible to accurately trace the movement of water through these three systems.

“These are basically three gears that are locked together,” Entekhabi says. “If we don’t get this right in models, because we don’t know what the linkage is, it’s a problem. Measuring soil moisture is important because it’s the pivot that links these three gears.”

Understanding soil moisture will likely greatly improve the accuracy of weather forecasts at a fraction of the cost of other measures, like beefing up computing power to support higher resolution weather models. It will also improve how models estimate how climate change will affect precipitation, which, up until now, has been notoriously difficult to pin down.

“All the models agree on global temperature; you can’t get that wrong,” Entekhabi says. “But what’s going to happen with regional water availability, regional precipitation, the models don’t even agree in sign—some of them are positive, some of them are negative—let alone magnitude.”

Entekhabi’s work on the water cycle and soil moisture spans decades, starting with his doctoral work at MIT, where he worked to improve how climate models account for land surface moisture. He joined MIT’s faculty in 1991 and has been involved with the Joint Program since its creation in the early 1990s.

“A major question in the field today is what is climate change going to do to the water cycle?” Entekhabi says. “The real challenge is predicting the future of water availability at a regional scale.“

To address this issue, Entekhabi worked with the Joint Program to create a new way of predicting how climate change will affect the frequency and severity of extreme precipitation. The method takes advantage of the fact that climate models do a good job of simulating the large-scale atmospheric events that lead to extreme precipitation, even though they’re bad at predicting the precipitation itself. The method bypasses climate models’ built-in precipitation parameterizations, and instead looks for the large-scale conditions that have been associated with extreme weather events in the past.

“What we’re doing is basically fingerprinting,” Entekhabi says. “We use the historical record to find a fingerprint, or pattern of what’s going on in the large-scale climate that causes extreme weather.

The technique, called an “analogue” method because it does not directly simulate precipitation within the model, gives more accurate reproductions of past extreme weather events than climate models alone. Once the patterns associated with extreme weather—either very wet or very dry—are identified, the next step is to look at future changes in these patterns in a climate model.

Entekhabi is currently working to identify these patterns across several regions. In one example, he studied over 100 years of precipitation data for the region around Mumbai, where the monsoon season can cause devastating floods in densely populated areas. The monsoons that caused the worst flooding left a distinct atmospheric fingerprint, he found.

“The fingerprint of the monsoon is much larger than the local flooding in Mumbai,” Entekhabi says. “The circulation patterns extends all the way to the Arabian Sea and the coast of East Africa. Basically a long arc of vapor from the Arabian Gulf gets blocked, and it just sits there and rains a lot.”

The method can be applied to any event in any region, as long as it is associated with changes in large-scale atmospheric conditions. Working with Dr. Adam Schlosser, a senior research scientist and assistant director for science research at the Joint Program, Entekhabi is currently applying the analogue method to West Africa, a region that relies on rain-fed agriculture for most of its food. Most of the rain in the region falls during a three-month rainy season in the summer, and what happens in the rainy season can make or break the area’s food supplies.

“Models will always be uncertain once you start looking into the future,” Entekhabi says. “SMAP is one way we’re trying to improve the quality of models—by looking at how the water and carbon cycles fit together. The analogue approach is another way of attacking the challenge of regional water availability from an entirely different angle.”

For now, Entekhabi is turning his attention skyward. In the Fall, Entekhabi traveled to Southern California, where SMAP was being loaded into a rocket at the Jet Propulsion Laboratory. He’ll remain there through the spring, while SMAP is being calibrated. 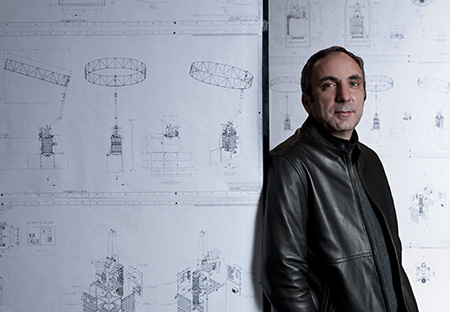 Dara Entekhabi is the Bacardi and Stockholm Water Foundations Professor with a joint appointment between the Departments of Civil and Environmental Engineering, and Earth, Atmospheric and Planetary Sciences.

Entekhabi is the science team leader for the NASA Soil Moisture Active/Passive (SMAP) satellite launching January 2015. SMAP will measure soil moisture and soil freeze/thaw status using two instruments: a radar and a radiometer. The former has a higher resolution and the latter has more accuracy in measuring soil moisture. Several members of his research group are contributing to the development of the retrieval algorithms for the radar instrument, and for the flagship SMAP soil moisture product that will optimally combine radar and radiometer measurements.