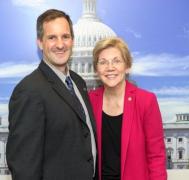 Earlier this year, graduate students and faculty from the EAPS Program in Atmospheres, Oceans, and Climate traveled to our nation’s capital on a mission to build relationships with policymakers on both sides of the aisle.

Navigating the current U.S. political climate can be tricky business, especially when it comes to science policy. With Congress divided more than ever on numerous important issues, including climate change, it’s important for legislators to have access to experts and the best available scientific research. Earlier this year, graduate students and faculty from EAPS’ Program in Atmospheres, Oceans, and Climate traveled to our nation’s capital on a mission to build relationships with policymakers on both sides of the aisle and bring them the latest atmospheric and geoscience research.

Dan Cziczo, an Associate Professor of Atmospheric Chemistry, met with senators from Massachusetts and Maryland during Weather Day on the Hill hosted by the University Corporation for Atmospheric Research (UCAR). “It was fun and a great learning experience for me,” he said. “We were there to make people aware of what we're doing with the funding we receive and how it’s not just abstract science but impacts everyday life.”

Cziczo not only cleared up common misconceptions such as where weather information comes from, he also discussed the science behind increases in temperature and severe storms. But it’s not enough to just give legislators a quick primer on the latest science. Researchers also have to make it relatable. For Cziczo, that meant tying the changes in temperature and storms to agriculture. “Policymakers put a great emphasis on their particular constituents and their state’s economic growth. Bringing [the science] back to a global picture is I think really helpful,” he said.

It’s not just faculty that are offering their scientific services, MIT students are also getting in on the action through various organizations, including the American Meteorological Society (AMS). “Working with students is great,” said Ya’el Seid-Green, an AMS policy program associate. “We think one of the best things we can be doing is getting to people early in their career and helping them think about how their work fits into society and fits into policymaking.”

Much like Cziczo, MIT graduate students Daniel Gilford and Dan Rothenberg met with various congressional aides through AMS earlier this year during ‘Weather, Water, and Climate Day’ to offer themselves as a resource. “As scientists, it's tempting to sit at our desks all day and do research and never get out and talk with people face to face about what we're doing, what we think is important, and how what we're doing relates to other people,” said Gilford, who is also a student coordinator for MIT’s Joint Program on the Science and Policy of Global Change. “We’re used to writing scientific papers, but it's more challenging to communicate science well to people who don't have a strong background in science or your specific research area.”

Another item on their agenda was to emphasize the importance of funding geoscience research—an all-encompassing term that refers to the scientific fields dealing with planet Earth. Sequestration of the federal budget in 2013 tightened the belt around scientific funding sources across all fields, and researchers are still feeling the effects. Now it’s more important than ever for policymakers to know where the money they allocate for scientific research goes and how that research benefits their constituents. For Gilford and Rothenberg, meeting with congressional aides was an opportunity to put faces on the dollar signs without advocating for specific legislation or federal agencies—an AMS policy.

“When you pour money into geosciences to support students like myself, we can go on to do a lot of different research that's important for stakeholders and improves the research community,” Gilford said. When he isn’t building relationships with congressional offices, Gilford studies the impact of atmospheric radiation on hurricanes. His research, which has important implications for people living along the East Coast and the Gulf of Mexico, opened up some great conversations about climate and extreme weather. “I was pleasantly surprised and impressed at the level of engagement. I didn’t get the feeling we were unwanted at any point. Everybody understood we were there to help, we weren’t there as some sort of lobbying team.”

Fostering conversations of climate change, a politically fraught subject on Capitol Hill, requires a delicate touch. Some policymakers are more open to discussions than others, and in some instances even uttering the phrase can shut down dialogues. Through his work with AMS and the MIT Science Policy Initiative, Rothenberg has developed indirect approaches to opening up the climate change conversation, such as using buzzwords and reframing his research. “I can spin it a lot of ways, like how air pollution affects clouds, or building models of clouds to predict thunderstorms,” said Rothenberg, a physicist who studies clouds in the context of climate. “Any time you can link it back to economics and public safety, you can usually hook in and get a good conversation going.”

Rothenberg currently resides in Massachusetts, but he originally hails from Kentucky and has developed a good relationship with Republican Senator Mitch McConnell’s office over the years. Although currently embattled with the Obama Administration over the EPA's Clean Power Plan, McConnell still focuses on science and environmental issues at home in Kentucky. In the past, he has helped sponsor bi-partisan legislation to boost federal science funding such as the original America COMPETES act, which aims to improve the competitiveness of the United States through investing in innovative science, technology, and education.

But legislators need access to sound science to effect sound science policy like the COMPETES act—something that isn’t always available. Throughout the years Rothenberg has happily answered questions from McConnell’s office, but not all of them are related to atmospheric science. The problem, Rothenberg says, is the lack of scientists willing to meet with policymakers. “The biggest barrier [to building science policy relationships] is the mismatch of interests,” he said.

Scientists’ reluctance to build relationships with politicians stems from a fear of harming their reputation for being objective and unbiased. Although that is a legitimate concern, there are ways to make connections and maintain moral and scientific integrity. “If your goal is to develop a relationship with offices as a person they can come to for the scientifically validated information they need—if you’re just willing to do that, it’s not murky politically,” said Rothenberg. “I’ve never met an office that didn’t love science. It’s very bipartisan. In terms of wanting the facts so they can do the best job they can, no politician is going to turn down scientists.”

Congressional visit days through AMS and the MIT Science Policy Initiative are an invaluable scientific resource for policymakers. But it also provides researchers with new perspectives on the inner-workings of the policy process. “It's really easy to get cynical about science and politics, but if you go up there and meet the people who work on the hill, you'll learn they are incredibly smart, dedicated and hardworking,” said AMS policy program associate Ya’el Seid-Green. “It gives you a better appreciation for the hard work that goes into making policy. It breeds mutual respect between the science and policy communities.”