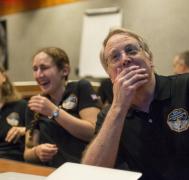 A Planet for all Seasons

What does it feel like to be on NASA's New Horizons team? EAPS graduate student Alissa Earle knows.

As an undergraduate I majored in math and physics as Siena College (north of Albany, NY). After my freshmen year I started doing astrophysics research with one of my professors who was studying galaxy clusters. I quickly fell in love with research, but there was one thing I found really frustrating about studying distant galaxies. When you're observing far away galaxies you never really get to watch them change or see them from a different viewing angle because they are so far away and evolve on timescales so much longer than a human lifetime. This is what drew me to planetary science. Not only can we observe objects in our solar system moving and undergoing changes but we can also send spacecraft to them to get an even more detailed view and see them in ways we would never be able to observe them from Earth (for example being able to get images of the far side of the moon). It was both extremely exciting and satisfying over the course of the summer to get to watch Pluto and Charon go from being a handful of pixels to dynamic and intricate worlds. And they, along with Pluto's small satellites, continue to not disappoint. Every week we are getting down more fascinating data from the Pluto system and continue to be stunned over and over again (and there is still plenty more data on the spacecraft awaiting its turn to be sent down).

Being on the New Horizons science team has not only meant getting to see all of these spectacular images as they come down but it has also given me the opportunity to work with a lot of really wonderful and talented people, many of whom are EAPS alum, including 2 of the 4 Deputy Project Scientist for the New Horizons mission (Leslie Young and Cathy Olkin). It was a great learning experience this summer to get to work as part of a big group all in one place (John Hopkin University's Applied Physics Laboratory) as the first results data was coming down and getting to be part of the discussion as we analyzed and worked to interpret the data.

My primary research right now is focused on how Pluto's seasons may be effecting its surface composition and volatile distribution, and what the surface temperatures are like on different parts of Pluto. Pluto's seasons are not only extreme but they also change over time as Pluto's orbit changes. So the seasons Pluto experiences now are very different from the seasons experienced 1 or 2 million years ago. The temperatures are also affected by whether a given area of Pluto's surface is bright or dark (think about how black asphalt gets really hot when the sun shines on it). By studying how Pluto’s seasons have been changing over million year timescales and looking at how different brightness patterns effect temperatures I hope to gain insight into when and how Pluto’s interesting surface variations formed and how long they will last.

Pluto’s diverse surface, typified by the smooth bright plains of Sputnik Planum being adjacent to the dark terrains of Cthulhu, defies any easy explanation for how it got that way. In my work, I am trying to explore how “seasons” on Pluto might be part of the explanation. There are two reasons for Pluto having seasons. The first is for the same reason that Earth has seasons. The second is unique to objects with elongated orbits, like Pluto. Both Earth and Pluto have seasons because their spin axes are “tipped over.” Earth has a rather modest tilt, only about a 23-degree slant compared with being straight up-and-down in its orbit. The consequence of this tilt is that over the course of one year, the North and South Poles take turns being tipped toward the sun. Earth’s North Pole is tipped more toward the sun in June, and six months later with the Earth being on the opposite side of the sun, Earth’s South Pole is tipped more toward the sun in December. This gives us alternate seasons of summer and winter, even though the Earth is in a nearly perfect circular orbit. 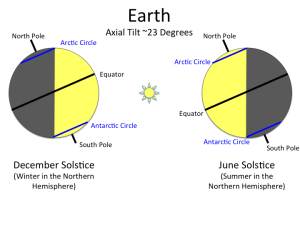 While Earth’s 23-degree axis tilt is mild, Pluto’s axis tilt is extreme: 119.5 degrees! What this means is that Pluto’s north pole is nearly upside down compared with Earth. What’s more, the extreme tilt gives very extreme seasons. On Earth, the midnight sun in summer and arctic darkness in winter are limited to the highest latitudes on Earth (the Arctic Circle at 67 degrees north and Antarctic Circle at 67 degrees south). On Pluto, the midnight sun and long arctic darkness affect nearly the entire planet. The equivalent for Earth would mean all of North America and Europe would experience months of midnight summer sun and then months of darkness in winter. Because Pluto takes 248 Earth years to go around the sun, these long seasons last more than a century.

But wait, there’s more. The second factor driving Pluto’s seasons is that its orbit is not circular. Instead, it is very stretched out into an ellipse. (To imagine an ellipse, think of the silhouette of an egg tipped over on its side.) Earth’s orbit is also elliptical, but to a much smaller degree than Pluto’s. 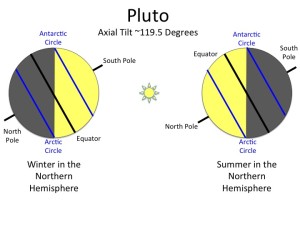 During its orbit, Pluto passes as close to the sun as about 30 times the distance between the Earth and the sun (bringing it even closer to the sun than Neptune) and travels as far away as about 50 times the Earth-sun distance. This means during some seasons on Pluto, the effect is even more dramatic: for example, “hotter summers” for whichever part of Pluto is tilted toward the sun at the closest point in its orbit. This effect is not unique to Pluto, although Pluto is one of the most extreme cases of it. For example, Mars experiences a less dramatic version of this effect because it has an orbital tilt a little greater than 25 degrees and moves between 1.4 and 1.7 Earth-sun distances over the course of its orbit. Keep in mind, that on Pluto, “hotter” is a relative term. A summertime high might only be “in the 70’s” as measured in Kelvins—about 330 degrees below zero Fahrenheit (minus 200 degrees Celsius).

It’s refreshing to see at least one example that makes our Boston winters seem mild.

This story grew out of a recent NASA blog post Alissa wrote.

Upper right: Earth’s seasons are caused by its axis being tilted about 23 degrees. Credits: MIT/Alissa Earle

Lower left: Since Pluto has a much higher axial tilt of roughly 119.5 degrees, it has much larger arctic and antarctic circles, each stretching from roughly 29.5 degrees latitude to their respective poles. This means that at the peak of Pluto’s summer the area receiving the most direct sunlight is actually in the arctic circle. Credits: MIT/Alissa Earle 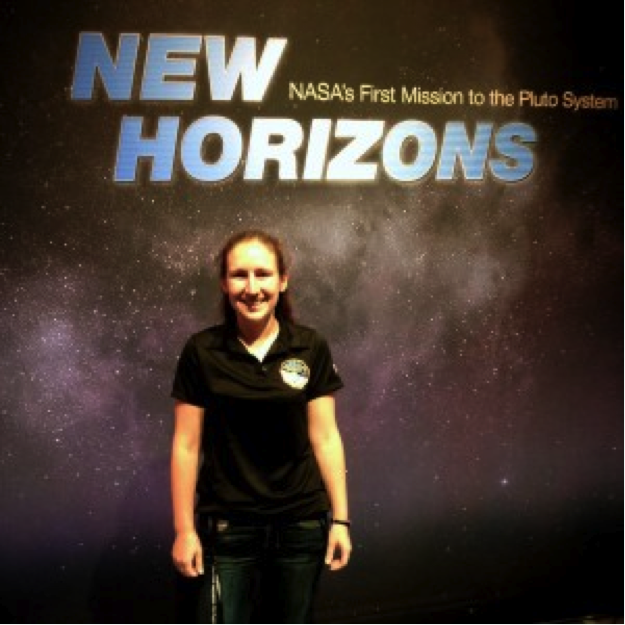 Alissa Earle, a graduate student in Planetary Science in EAPS is also an early career member of the NASA New Horizons team. Her work focuses on the long-term seasonal variations that may be affecting what we see on Pluto’s surface. Her advisor is Prof. Rick Binzel.