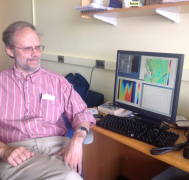 For the Love of Physics

Oceanographer Glenn Flierl’s passion lies in understanding the physics that shape life as we know it on Earth and other planets.

Much like the ocean currents he studies, MIT oceanographer Glenn Flierl is a quiet force. He has been a fixture in the Department of Earth, Atmospheric, and Planetary Sciences (EAPS) for nearly 40 years and continues to generate a substantial body of groundbreaking work. But he eschews the spotlight that accompanies such success, instead preferring to focus on the science. Described by colleagues as a big thinker, Flierl is no doubt an integral part of MIT’s ocean community.

Flierl’s interest in the ocean stemmed from an unlikely place—youthful summers spent in Falmouth, Massachusetts, working for the Light Opera Theater Company. When he wasn’t building sets, Flierl and his theater friends would go to the beach. It was during one of these trips that he met a mutual friend who worked at Woods Hole Oceanographic Institution. “I realized you could do physics about the ocean!” Flierl said.

He kept that notion in mind when applying to graduate school. Flierl earned a bachelor’s degree in physics from Oberlin College, but “knew nothing of oceanography at that point,” he said. “I picked a school where I had the option [to explore the field].” Flierl enrolled in Harvard University where he worked closely with the late Allan Robinson, a professor of geophysical fluid dynamics, studying ring formations in the Gulf Stream—an intense, warm current  in the western North Atlantic Ocean. They were interested in using the rings as a sort of contained ocean laboratory to observe how biological, chemical, and physical properties changed over time. After earning a doctorate in 1975, he joined MIT’s Department of Meteorology and Physical Oceanography shortly before it merged with the Department of Earth and Planetary Sciences to become EAPS, and has remained there ever since.

Soft spoken with a voice some say is reminiscent of Clint Eastwood, Flierl embodies a typical college professor more than Dirty Harry. Stacks of books and papers clutter his office overlooking the Charles River, and equations and diagrams populate the chalkboard—hallmarks of a dedicated scientist. “Glenn is always interesting, he’s probably the smartest person around,” said Raffaele Ferrari, an MIT oceanographer and Flierl’s frequent collaborator. “If you want someone to give you perspective, a good theoretical underpinning of anything you’re trying to work on, he’s great.”

Over the years, Flierl has mainly focused on the physics of ocean turbulence—how properties like eddies, jets, and nonlinear flows form—and its implications for biological life. The distribution of ocean ecosystems is strongly determined by turbulence, the transport of materials such as nutrients and heat, and biological interactions. “In some ways there’s been a lot of work on the biology without the physics,” said Flierl. “A lot of work now is trying to build biological models into the physics, but the models are often too simple or too intricate. We have a long way to go to understand how transport by the flows are reacting with biological processes.”

Recently, his interest in this area has drifted toward evolution. Flierl is modeling the coevolution of predators and prey, such as zooplankton and phytoplankton, in context of ocean mixing and transport. Earth’s upper ocean is home to a variety of diverse ecosystems as well as intense turbulence. As predators and prey compete in an evolutionary arms race, continuously outmaneuvering each other in the fight for survival, they also face a changing environment. In addition to natural speciation, Flierl’s initial findings suggest that ocean turbulence also contributes to the evolution of new species by changing the playing field. “As soon as you start to slightly mix up the environmental gradient, things like temperature or salinity, the competition actually causes [predators and prey] to appear in discreet groups,” he said. The next step is to examine this dynamic in areas of the ocean where mixing is more complex.

Understanding the complexity of ocean circulation is also vital for gauging the human impacts on marine ecosystems. Flierl was recently awarded a SEED Grant along with colleagues Thomas Peacock and Pierre Lermusiaux from the Department of Mechanical Engineering for their project “Digging Deep: An integrated approach to assessing the impacts of deep-sea mining.” The grant encourages new, cross-disciplinary research partnerships that advance progress and solutions on environmentally significant issues. “Flierl brings insight and skill in analytical and numerical modeling of the physics, chemistry, and biology of ocean circulations to understand the environmental impact of mining the sea-floor,” according to the press release.

Additionally, he is working on a grant proposal that would fund research aimed at understanding the continuing impacts of the Deepwater Horizon oil spill—the largest in U.S. history. The thick red-brown sheen that coated the Gulf of Mexico was only a fraction of the more than 100 million spilled gallons. A large portion remained underwater, sinking to the deep ocean. Flierl and William Dewar, his first graduate student at MIT who is now an oceanographer at Florida State University, are turning to rings to find out where exactly the oil went and where it’s going. “They are easily the most important kinematic features in the Gulf of Mexico and likely play a very important role in distributing subsurface oil,” said Dewar. “We want to understand the physical processes a little better,” added Flierl. “Particularly how these eddies form, how they interact with smaller eddies, what their vertical structure is so we can begin to understand what the currents are in the deeper water that are transporting the oil.”

To Infinity and Beyond

Flierl has expanded his scientific inquiry beyond Earth’s oceans into the atmosphere and other planets thanks to adventurous and inquisitive students. “I think one of the things that’s fun about being a scientist is that there’s always interesting problems to solve,” said Flierl. “So when you have a student who is interested in one, you can both learn new things.” One of his first forays into outer space physics involved working with a former student who was particularly interested in vortices that formed in the solar nebula—a large cloud of gas and dust. Together, they investigated the potential of these vortices to accumulate dust and form planets.

More recently, Flierl teamed up with former EAPS graduate student Morgan O’Neill and MIT Atmospheric Scientist Kerry Emanuel to investigate giant storms on our solar system’s second largest planet. In a study recently published in Nature Geoscience, the team used model simulations to deduce the mechanism behind Saturn’s polar cyclones—intense storms that last years. “Glenn was absolutely essential in his insights and how to construct a two layer model of this process,” said Emanuel. “He’s absolutely at the forefront of understanding fluid dynamical processes involving intense localized vortices, and how that operates in connection with turbulence. He was the brains behind how to build this model.”

While Earth’s cyclones are fueled by heat and moisture of the oceans, Saturn is a gas giant devoid of large bodies of water. It turns out that over time, the planet’s small, short-lived thunderstorms build up angular momentum within the atmosphere, pulling air toward the poles resulting in massive vortices. Whether a planet is capable of developing cyclones depends on the size of the planet relative to the size of its average thunderstorm and how much energy thunderstorms add to the atmosphere. Based on these findings, the researchers predicted that Neptune should generate polar cyclones whereas Jupiter should have none. Eventually, the model may be able to estimate atmospheric conditions on planets beyond the solar system.

Flierl is not only dedicated to science, but also to training the next generation of scientists. He teaches a variety of courses at MIT and Woods Hole Oceanographic Institution (WHOI), and is a co-director of the prestigious Geophysical Fluid Dynamics fellowship. Every summer, eminent researchers and promising future scientists gather for a ten-week summer school at WHOI where they use mathematics to better understand the physics of Earth’s fluid systems, such as oceans, rivers, and atmosphere. Flierl relishes the one-on-one collaboration the program offers and cultivates similar relationships with his graduate and postdoc students at MIT. Glenn’s longtime teaching collaborator in EAPS, Lodovica Illari, remains in awe of his dedication to students. She said:

Teaching with Glenn is very rewarding. His knowledge is incredibly deep and his technical ability outstanding. In the lab class we teach together, the students learn a lot and I keep learning with them. Glenn listens attentively to what the students have to say and is always available to help and suggest new approaches. Every students wants Glenn as a member of their PhD committee. I am sure that, if we make a count, he holds the record for this.”

Flierl’s passion lies in understanding the physics that shape life as we know it, but he also cares about communicating those concepts to the public in innovative ways. He leads the iGlobe/MIT Project, a National Science Foundation funded initiative aimed at harnessing technology to help people understand the interconnectedness of the world’s atmosphere, ocean and ecosystems, and realize the importance of understanding climate science and climate change. Mainly used in outreach at schools and museums, the iGlobe is a three-dimensional orb that projects over 250 movies of ocean, weather, and climate—all of which are created from data stored in an online repository accessible to researchers, educators, and students alike. Flierl is currently building a simple interface that would allow users to explore Earth’s atmosphere and climate, as well as adapting the iGlobe for use in college classes and seminars.

Less than a year after being elected an American Geophysical Union Fellow, the American Meteorological Society recently bestowed Flierl with oceanography’s highest honor. The Henry Stommel Research Award recognizes select scientists for their significant contribution to the advancement and understanding of physical oceanography. Stommel is widely acknowledged as one of the most influential and productive oceanographers of his time, responsible for advancing theories about global ocean circulation patterns and Gulf Stream behavior that laid the foundations for the field of physical oceanography. “[He] was the most accomplished theoretical physical oceanographer ever,” said Ferrari, who nominated Flierl for the award. “Physics has Einstein, we have Stommel, and now Flierl.” While Flierl doesn’t care for awards and recognition, he was happy to have won. “I thought it was another large meeting I had to go to,” he said, referring to the 95th Annual AMS Conference held in Arizona last January. “But [receiving the award] was nice.”

Earlier this month, oceanographer Glenn Flierl traveled to Kyoto, Japan, to give a series of lectures on fluid dynamics in earth and planetary sciences.

The annual Workshop on Fluid Dynamics in Earth and Planetary Sciences (FDEPS) is hosted by a consortium of Japanese universities and research institutes, and aims to promote fluid dynamics as a fundamental language to describe and understand geophysical phenomena.