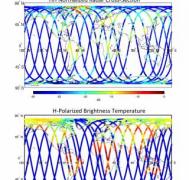 As severe weather hazards continue to afflict parts of the country to historic extremes, Professor Dara Entekhabi of the MIT Department of Civil and Environmental Engineering (CEE) and a team of NASA scientists provide an unprecedented resource to accurately observe moisture levels within the land for more precise prediction of weather and climate.

During this test, Entekhabi explains, the satellite is not spinning as it orbits the Earth pole-to-pole. As a result, it images a narrow footprint on the ground. Later in March, when the satellite begins to spin as it orbits, the ground footprint will not only have higher resolution but it will also cover a 1,000-kilometer-wide swath.

Specific elements outlined in these early images included a defined contrast between land and ocean bodies. This, says Entekhabi, is a test of the geolocation accuracy. Also over Antarctica, the distinction between ocean, ice shelf, and land ice were clearly evident. Over land, the scattering signature of regions with high biomasses palpably distinguished the sensitivity of the instruments with these early data. For example, the Amazon and Congo forests showed high radar echoes.

“This is just a tiny snapshot of SMAP’s capabilities,” Entekhabi says. “What we are seeing, even in a 40-kilometer line scan, is really remarkable.”

Additionally, the images detected evidence from a variety of known weather phenomena on the ground including Cyclone Marcia — a Category 5 tropical cyclone that occurred in Australia on Feb. 20. This cyclone’s footprint was illustrated in SMAP’s image through low brightness temperatures, a result of its high moisture content in the soil from heavy rainfall.

According to Entekhabi, the amount of accurate data received from SMAP in such an early stage is unparalleled by any other satellite mission.

“Where we are today, with just two days of data, is where other missions are after two years,” said Entekhabi. “Two other existing satellites, SMOS from Europe and Aquarius from NASA, took two years to come to the same calibration accuracy that we saw without any calibration at all.”

An Earth-monitoring mission initiated in late 1999, SMAP is designed to provide a global map of the moisture content of topsoil and provide meteorologists with a resource to better predict severe weather hazards such as heavy precipitation, floods, droughts, hurricanes, and wildfires.

The satellite is now being maneuvered into its final science orbit, which will take an estimated two weeks.

NASA mission controllers successfully deployed SMAP’s 6-meter-wide reflector antenna on Feb. 24 — a significant milestone in the estimated three-year satellite expedition. To unfurl it, NASA sent commands to the observatory to fire an onboard pyro that would release the stowed antenna, which ultimately engaged the motors and expanded the umbrella-like antenna.

Both the radiometer and radar were activated for a two-day period, during which Entekhabi and his team downloaded detailed data from the satellite and assessed the overall instrument performance. SMAP's science instruments and the deployed reflector antenna, in a non-spinning configuration, underwent their initial operation to view Earth.

Made of a lightweight mesh material, the reflector is the satellite’s preliminary step in its overall mission to provide global soil moisture maps.

“Both the radar and the radiometer performed absolutely flawlessly and beyond the team’s expectations,” he says. “The satellite was only on for 48 hours, and the team was able to process that very limited data all the way through the data systems. This is a testament to the preparedness of the mission team and the motivation to do it so quickly.”

On March 31, the mission controllers will perform their final science configuration by releasing the clutch that holds the satellite’s antenna in place and allow for the satellite spin as it orbits to start. The satellite will then have the ability to scan approximately 1,000 kilometers (620 miles), as opposed to exclusively visualizing the area directly beneath the spacecraft.

According to Entekhabi, this instrumental global soil moisture data acquired by the satellite will also allow scientists to gain a comprehensive understanding of the interconnected nature of Earth's three major cycles: water, carbon, and energy.

“We want a global perspective on the Earth’s water cycle in order to understand how the environment works as well as some of the applications that touch our every day lives,” said Entekhabi. “We want to bring the technical capability to sense the environment to the same level as medical imaging.” SMAP is an embodiment of the lessons taught behind the CEE doors, he continued.

SMAP’s science operations will commence the beginning of May, and provide a high-resolution map of the globe’s soil moisture every two to three days.