In an entertaining and illuminating breakfast presentation for local alumni and firends, Victor P. Starr Professor of Atmospheric Chemistry, Dan Cziczo explored why clouds represent the most uncertain piece of the climate puzzle and how we are affecting them.

Despite fresh snow, about 30 School of Science alums and friends arrived in the Bush Room at MIT for an early breakfast during February’s blizzard season to hear EAPS Professor Dan Czizco speak about clouds and their impact on our changing climate. Czizco gave a primer on the basics of climate change – how greenhouse gas effects on climate had been known since Swedish scientist Svante Arrhenius’ scientific paper in 1896 stated that “if the quantity of carbonic acid [CO2] increases in geometric progression, the augmentation of the temperature will increase nearly in arithmetic progression.” Czizco, an aeronautical engineer turned atmospheric chemist, noted that by 2010 we had experienced the warmest decade since accurate thermometers became available in 1880 – so there was no doubt that CO2 and greenhouse gases in the atmosphere, which had soared since the Industrial Revolution, was responsible for Earth’s warming. However, it was clouds that “mess things up” as their cooling effect on the planet cannot be predicted with such great precision, so giving rise to the uncertainty in climate models that run climate scenarios for the future.

Clouds form when molecules of water vapor meet particles in the atmosphere – these particles being anything from flying grains of sand or dust from the desert, to car emissions and soot (aka black carbon) from industrial plants. Czizco and his team develop sophisticated tools for sampling atmospheric data – whether in the lab in the Green Building at MIT to stations on distant mountain tops, and from NASA-sponsored flights in a special research plane that flies through clouds to collect samples. Data is brought back to the lab to analyze what kinds of particles are seeding clouds and to discover their origin. Czizco also makes his own clouds – and the audience watched him demonstrate this in a cloud chamber created out of a bell jar. Experiments conducted in the lab under controlled conditions can then provide valuable data that can be tested against different models.

Czizco’s team is researching many other aspects of clouds such as the effect of ice clouds on aviation, the impact of African dust storms on Europe and the optical properties of haze. Czizco concluded that understanding particles and cloud formation is critical in order to advance our knowledge of complex climate systems, and to create the models and strategies that will help us predict and manage our future. 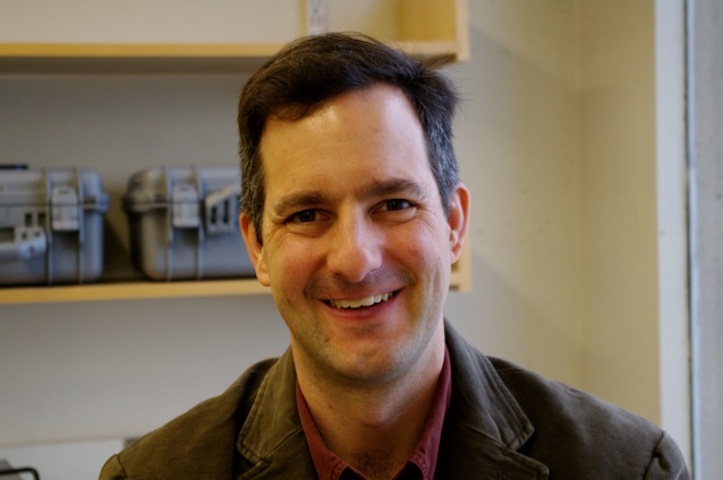 Dan Cziczo is an atmospheric scientist interested in the interrelationship of particulate matter and cloud formation. His research utilizes laboratory and field studies to elucidate how small particles interact with water vapor to form droplets and ice crystals.

Seeing Beyond the Clouds EAPS News

Dust in the Clouds MIT News

Getting Ahead in the Clouds Technology Review